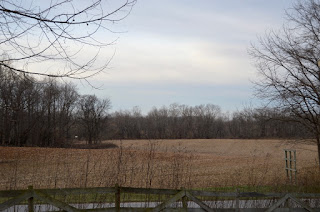 Well it's been a little over 24 hours since Winston hurt his back. I feel encouraged for his improvement here on Sunday morning at 11:50am.

He also controls his bladder and bowels. He will whine when he needs to go outside. I carry him outside, sit him down and he will scoot to a place he smells to piss. It is recommended I clean him afterward with baby wipes to prevent infection from the urine. I have baby wipes.

I made a bed for him last night on the floor of the closet and then used a baby gate to block him inside. He slept there soundly. I was afraid that either I or one of the bloodhounds would roll over on him if he slept in the bed with me.

I heard him whinning at 4:05am. He wanted to go outside. He peed immediately in the sitting position. When we came back inside I put him next to me on the bed and covered him with my sleeping bag. We slept that way until a little after 7am.

Once again I took him outside and he walked dragging his rear legs to a spot he "smelled" to pee. As the normal routine I feed all the hounds when they got back inside. I included the 50mg of Rimadyl with his food and he ate it with no problems.

I am seeing a little improvement:

With that I am much more encouraged than I was this time yesterday or even last night. I honestly think he will recover from whatever hurt his back and it might not be as bad as I thought. IF the vet told me to look for improvement by Monday (48 hours), THEN THERE MUST BE A POSSIBILITY FOR HIM TO IMPROVE!!!
I always second guessed myself when I euthanized Harry a few weeks after his surgery. His condition was a little worse than Winston's. From what I have read, this condition CAN improve but it might take up to 6-8 weeks of confinement. To me, as long as I see life in his eyes, (that Winston look) normal appetite and no signs of pain ... I will keep working on his recovery.
The vet said yesterday after Monday we would know if there "wasn't any improvement". He is already showing slight improvement within 24 hours.
This morning instead of the bloodhounds playing, chewing their bones and begging attention from me ... they jumped on the bed and slept next to Winston. The whole house has been kinda quiet since yesterday ... all the hounds know something is up with Winston. Even Heidi last night jumped up in the same chair to sit with him instead of staying in bed.
I guess it's good I pulled the down comforter off the bed every morning.

I think he can and will pull out of this and even get back to standing and walking on all 4 legs.
These are from yesterday afternoon after seeing the vet. 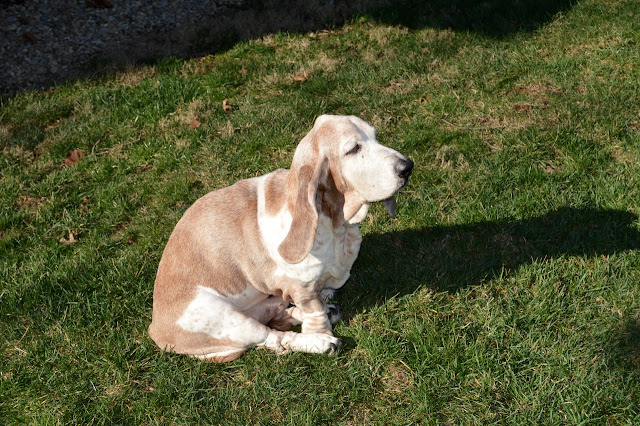 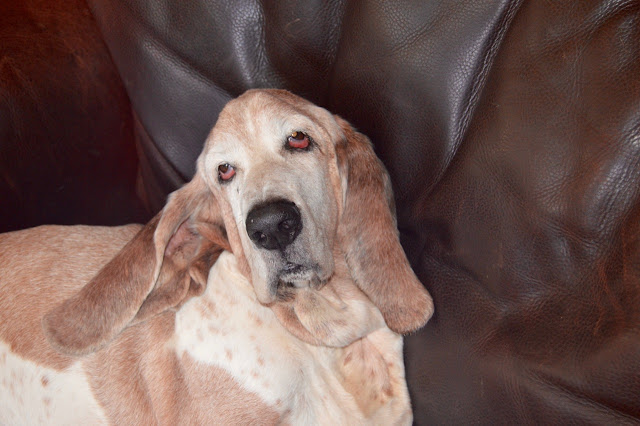 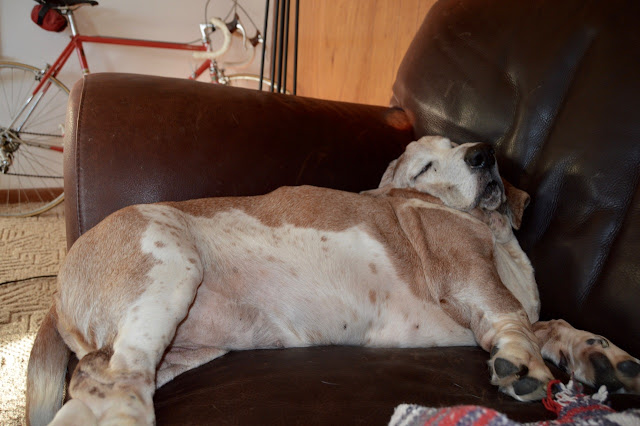 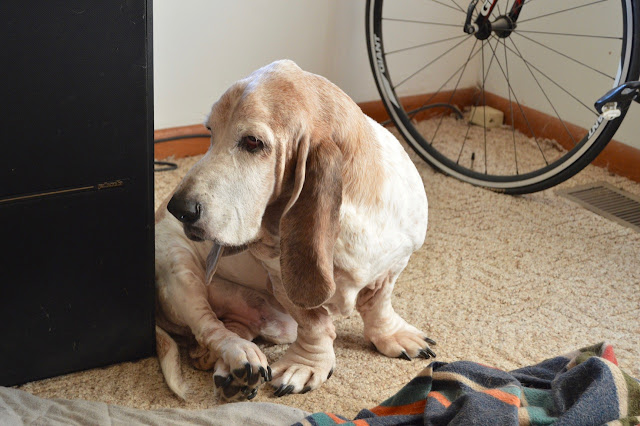 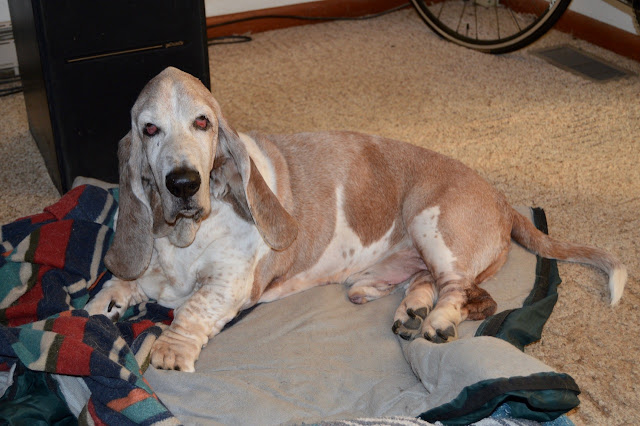 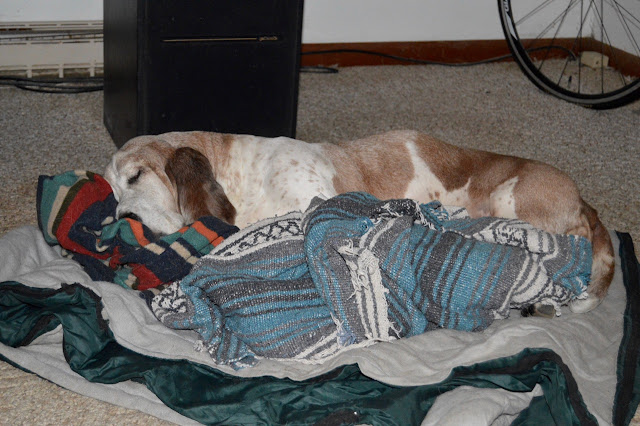 Last night Heidi decided to jump on the chair to stay next to Winston. Normally at this time of night she would be in the bedroom on the bed off to herself. 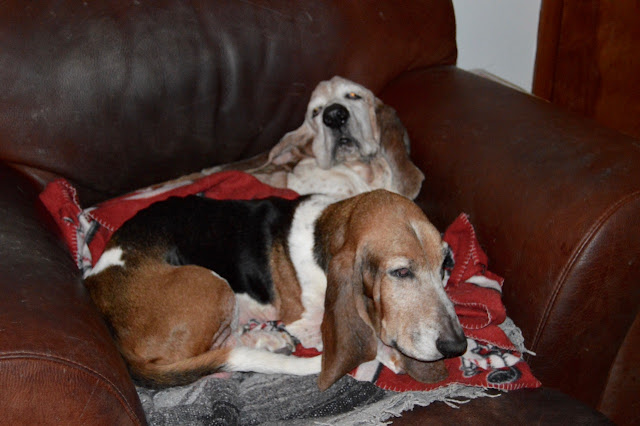 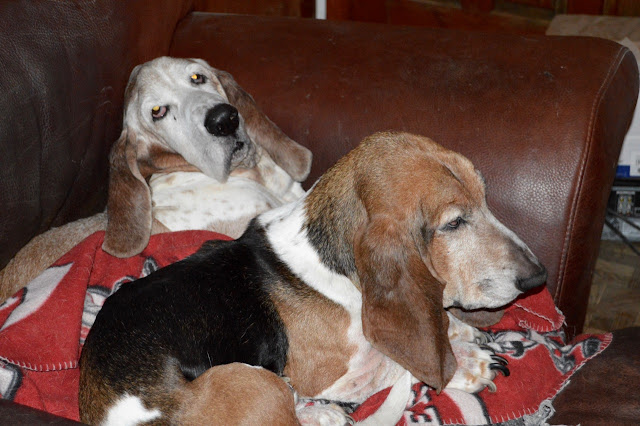 This morning after they had eaten their breakfast, instead of playing and chewing bones or begging for my attention ... they climbed up on the bed to sleep next to Winston. 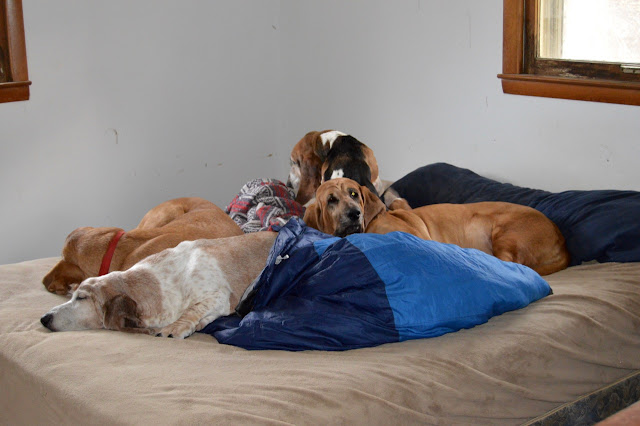 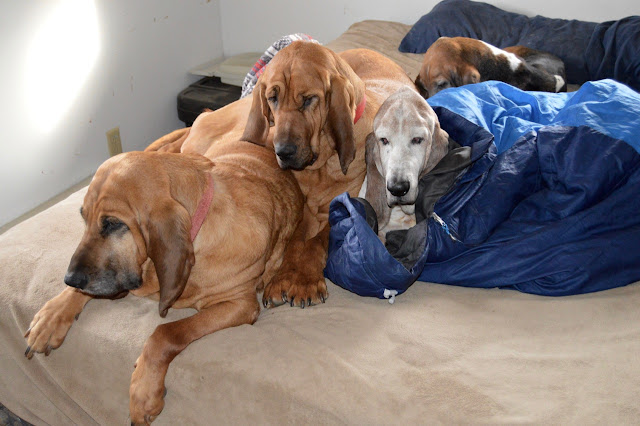 Stella and Sadie went out side but was not enthused to do too much but dump their tanks and sniff around. 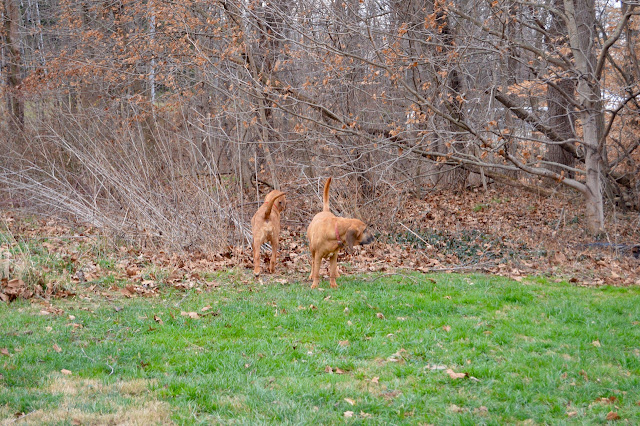 Winston had his first crap and it was a normal stool ... very encouraging I think. 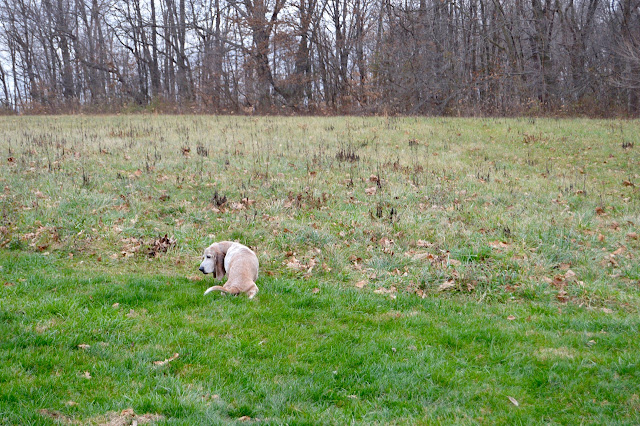 This is my temporary 'kennel' that seems to be working to keep him isolated and confined. I still want to get 2-4 portable panels to use as we move around the house during the day and night. 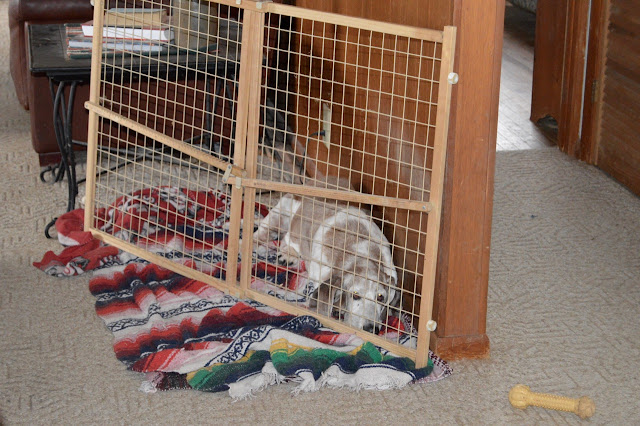 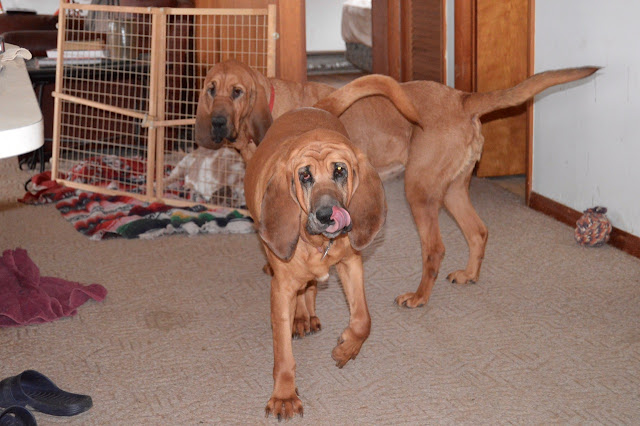 I feel encouraged about the little improvements I've seen so soon, within or a little after 24 hours after treatment.
at December 20, 2015
Email ThisBlogThis!Share to TwitterShare to FacebookShare to Pinterest
Labels: Back Recovery, Portable Crate, Rimadyl, Winston's Hurts Back, Winston's Status