Well sometime in mid-afternoon yesterday Heidi came over to me and let me know she was thinking about going outside for a little bit ... if I would open the door for her. If I had not stopped her on her way back to the door to go inside, that "little bit" would have been about a minute in actual time.

With some coaxing she turned toward me but decided at the last minute, sunshine or no sunshine she would not be going out into the yard. Remember last fall I talked about her 70° limit. At the time I said that jokingly but I am beginning to wonder if that is pretty accurate with her. 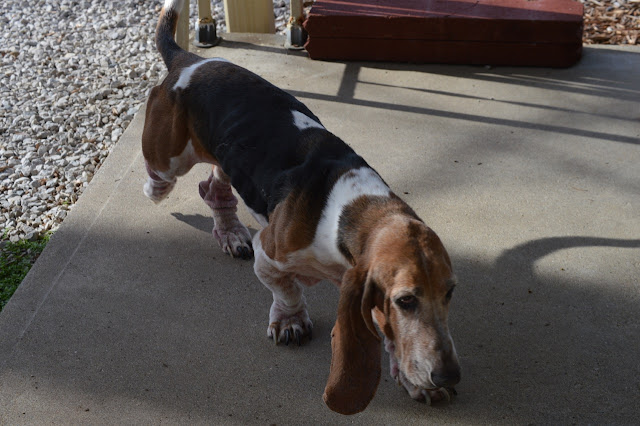 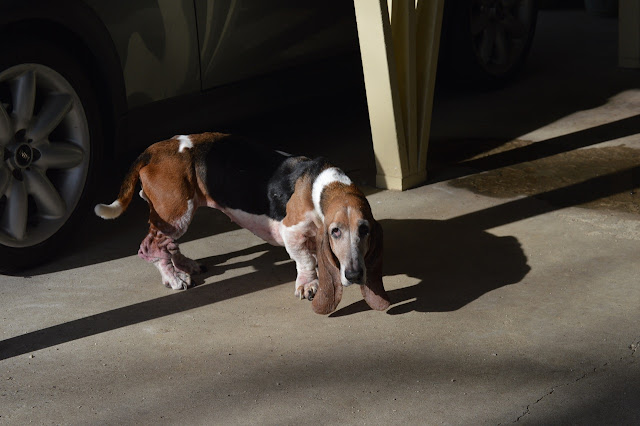 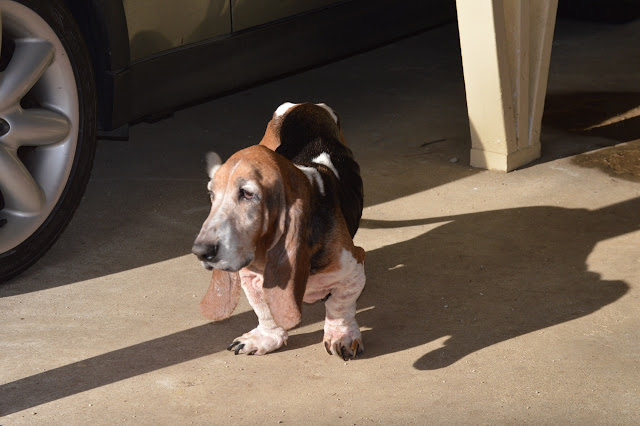 From those photos she looks like she has been gaining some of her unexpected weight loss back from last summer. Those toenails are being cut today no matter what nor how much she resists.

Since Stella showed up August 30, seat availability in the living room has been at a premium. Musical chairs are usually a nightly game. There has never been any fights but the two bloodhounds pout if there isn't room on the couch. In Sadie's case, also the large chair.

Recently Heidi decided all the action is out here in the living room at night ... not off alone in the dark sleeping. So she has decided that as long as there is a blanket spread out across that ottoman that is her seat. 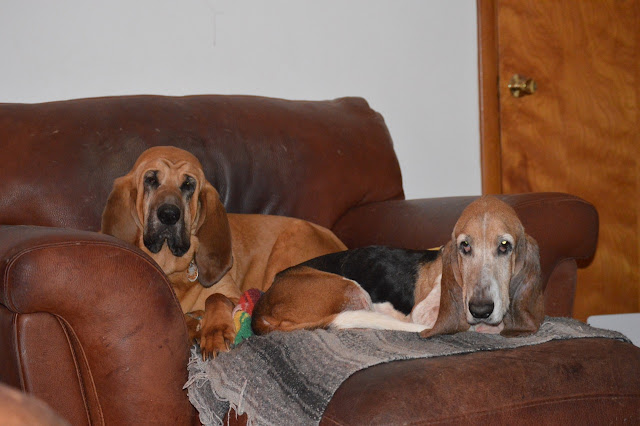 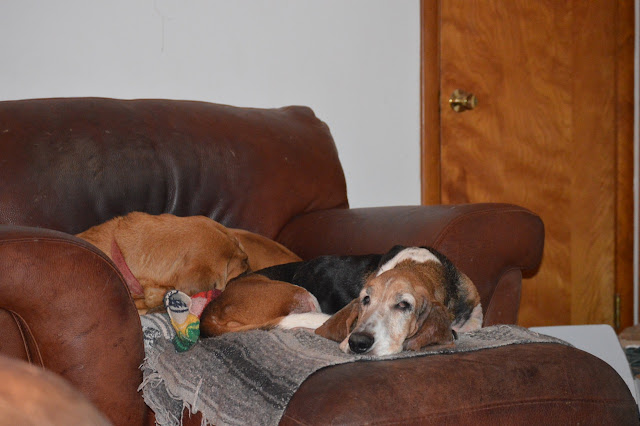 Now Stella is a different when it comes to pouting. She is more determined than the other hounds and usually one way or another in the end she gets her way and her seat. She will use different strategies. Her favorite is to stand in front of the couch, glare downward squinting her eyes and go into her statue mode. She will never look up at you in this strategy. I am expected to move the other hound out of "her" seat.

I don't always do that ... so she has two options.

She can and at times finds a place on the floor to lay. She is never in that spot long before she comes back into the statue mode, squinting again and not moving. Or ... she gets drastic and demands me to yell "stop", "get down", "Stella" or even some words that are not good for public viewing. What would she do to get that kind of response from me?

If there is an area on the coach as small as 4 inches by 4 inches, she visions herself in placing all four of her paws in that space and use her butt to sit on the offender, thus they move. Another favorite is she will JUMP up over the offender to stand over them or sit on them until the other hound wakes up and tries to move.

Now ... before the pet police come after me, those last two moves are stopped before they happen 99.9% of the time. They have happened at least once ... otherwise I would not be able to describe them to you, would I?  :)

But with Winston gated on the blanket in the corner, Sadie and Heidi on the chair and ottoman ... Stella has the space next to me all to herself. 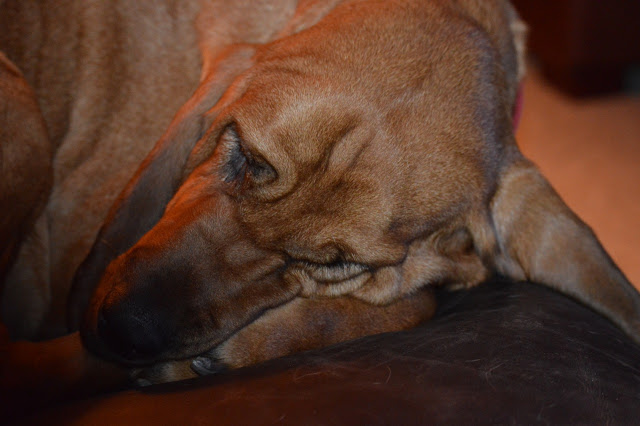 Over the years I have found they only prefer the furniture mostly in the winter months. Obviously they go by seasons in their analysis and not by outside temperature. 51° on Christmas morning in the Midwest is not winter. So they must be using seasons to base their decisions on.

Yesterday started out being a good day starting at 6:00 am and continued up through and past 11:00pm. He might have tweaked his back a little around 9:00 pm but did not yelp, or moan at that time.

From the time he woke up officially along with the other hounds around 8:30 am until 3:40 pm, he did nothing but sleep, drink water, go outside to dump his tanks, eat lunch, go back to sleep. He didn't lay anywhere but on the floor inside the gated area on the corner of the living room.

My spreadsheet to track his movements or issues is color coded red for improvements and blue for negatives. All of yesterday was noting but red notes scattered throughout my notes.

So what happened at 3:40pm?
I decided since he has been sleeping so well that the spot on the corner of the living room in the middle of all activity in this small house, he would not be move to the closet area I had set up, or to the bed, or the couch. This gated blanket area was his place for recovery.
Well at 3:40 pm Sadie, Stella and I tried to sneak out of the house for a daily walk through a saturated field from all the recent rain. When Stella's tail swung and hit Winston's choke collar that was hanging on a door knob, that woke him up and he KNEW what we were doing ... going on a walk. He only wears that collar on daily walks to trips to the vet when leashed. The three of us tried to get out of the house fast, closing the door behind us and then I heard it .....
Winston was barking to go. It's the first time I've heard him bark since the back problem started on December 19. He is not a barker to begin with unless it's missing a walk or joining the other hounds in demanding dinner.
By the time we got back he had calmed down enough to be laying down but when he saw me as I glanced in the door window to check him, he immediately moved from laying to a sitting position and his ears perked.
As the night got longer he started to move into some positions he had not been able to. Like laying on his left and right sides. For the past few days he could only lay on his stomach. He was able to turn and move either direction on his blanket while in the past few days it was only to his left side.
Then about 9:00 pm I noticed he was sitting still not looking at me or the other hounds, just staring into space. It was at that time I think he may have tweaked his back someway I didn't see because I was sitting on the couch.
After that he was back to gingerly lowering himself onto his stomach, one front paw at a time. He decided it would be really nice if he could use my sleeping bag. His patented move is to nose his way under the bag, turning inside to curl the bag around him and taking it from you, before dropping into a sleep position. Last night since he was having a hard time moving after 9:00 pm, he did the nose dive and laid straight. If you follow the tail showing on the left you can see the outline of him under the sleeping bag.
He did return it to me when it was time for sleep. 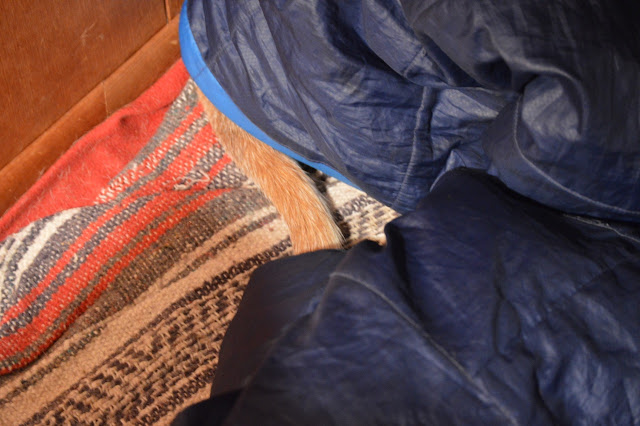 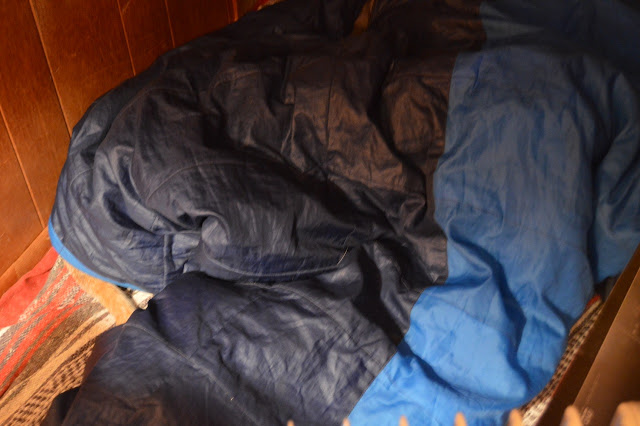 He did sleep soundly though until 3:09 am, when he woke up, had some water and we went outside. I decided to carry him since it was dark and early in the morning. He dumped all his tanks in the back yard. In one of his efforts I pulled his tail off the ground out of the way and I swear he raised his hips and stood every so slightly on his rear legs!! I hope I am not wrong on what I thought I saw.
We came back inside, he laid down and went back to sleep. Of course when we got up to go outside the bloodhounds sleeping in the living room now, heard us and escorted Winston and I to the backyard. They also returned to the house and was back to sleep in record time.
The hounds fell asleep and I was wide awake. One of those deals you know if you stay up it will catch up with you eventually later in the day but at the same time a cup of coffee would taste good even before 3:30 am.
It was 53° today at 3:09 am here in the "tropics" of southern Indiana.
at December 25, 2015
Email ThisBlogThis!Share to TwitterShare to FacebookShare to Pinterest
Labels: Christmas Day, Stella Pouting, Winston's Status