Winston Is Following The Rules With Sadie's Help 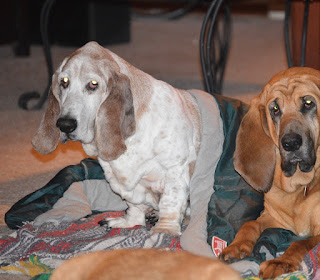 One thing all this rain has done for me is find me a better spot to photograph the field/horizon across the highway. I don't always post them but I have been taking a photo of that field across the highway every day. Until today I had been standing in my driveway. Then I go to the corner of my house and shoot back across the field.

It's just interesting to see the daily weather changes after you put all of those photos in sequence. So with the rain I started taking the photo just beside the steps to go into the house. That turned out to be even a better angle, capturing what I wanted in that photograph.

Things seemed to change for the better after the mid-day meal was fed to all the hounds. I guess if they don't mind eating 5-1/2 hours after breakfast and then not again for 18 or 19 hours until the next morning ... I won't either. Stella did her daily begging for food at that time so I fed all of them.

Winston was excited enough that he decided he was going to scoot across the floor from his blanket to the location his food dish use to be when he was healthy. To keep Sadie or Stella from backing into him and stepping on him due to their excitement, I stretched the gate across the blanket area and fed him on the other side of that baby gate.

Normally he likes to go outside right after he eats. So we did that today. With the t-shirt under him, and his tail wagging, he walked really fast toward the yard and peed even with his hips elevate. I picked him up to carry him back inside and he fell asleep within 5 minutes ... as long as I covered him with the hound sleeping bag ... a cheap Coleman.

I also changed the 18/55 lens on the D3200 and attached the 55/200. I could then take photos of his blanket area without leaving my desk chair in another room. It wasn't that I didn't want to get up, but the other way the hounds would either stop what they were doing or Winston would wake up, stand up or whatever and ruin the shot.

So here is a sequence of Winston this afternoon. All the movement of the sleeping bag are made by Winston moving around. 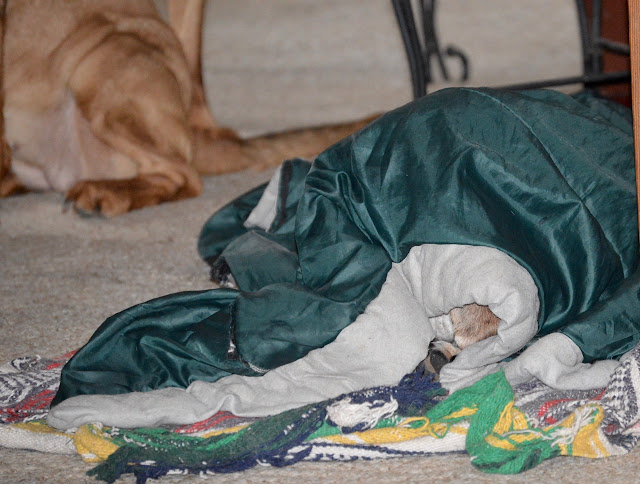 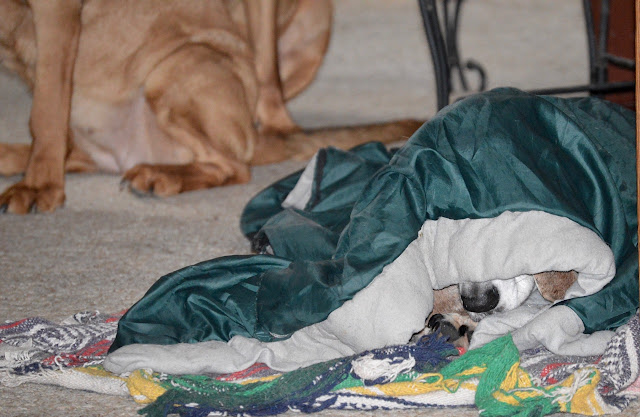 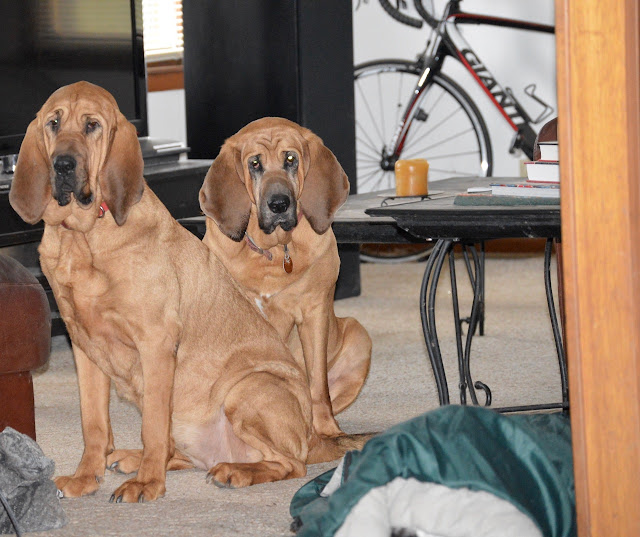 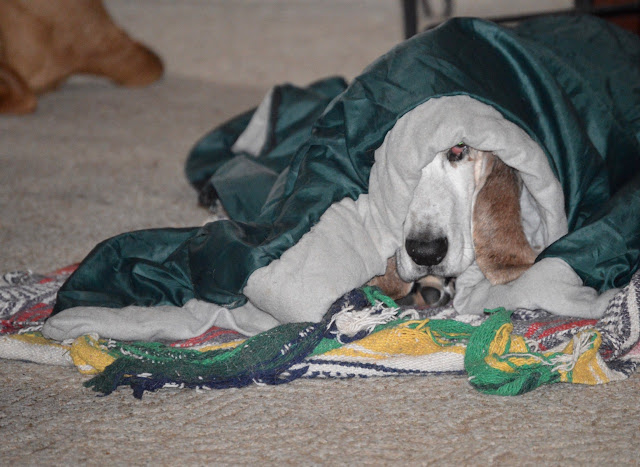 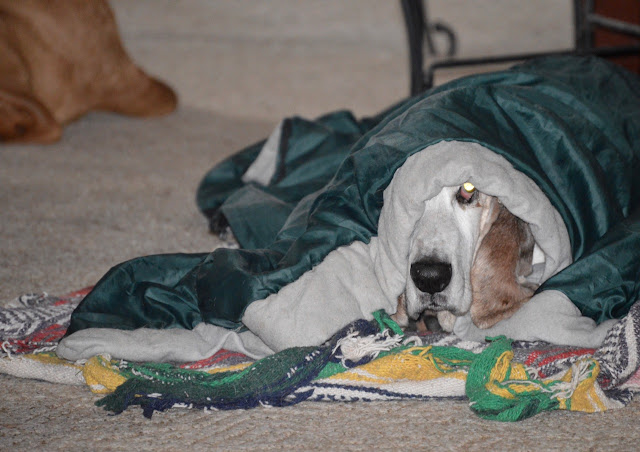 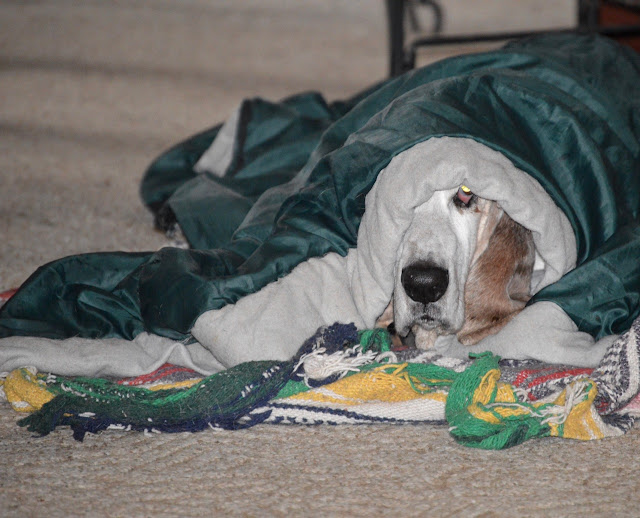 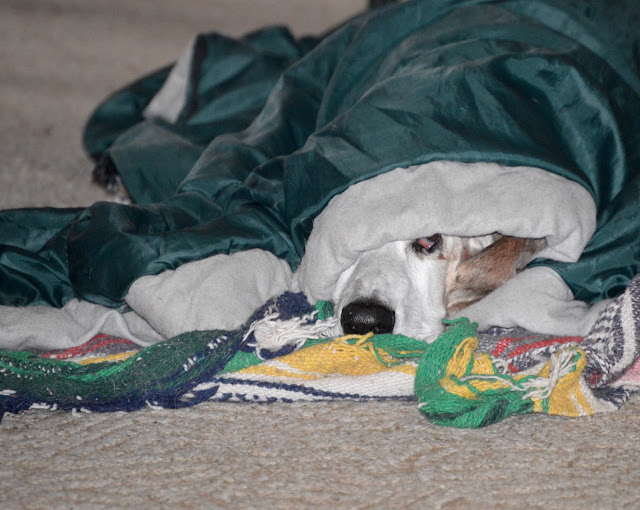 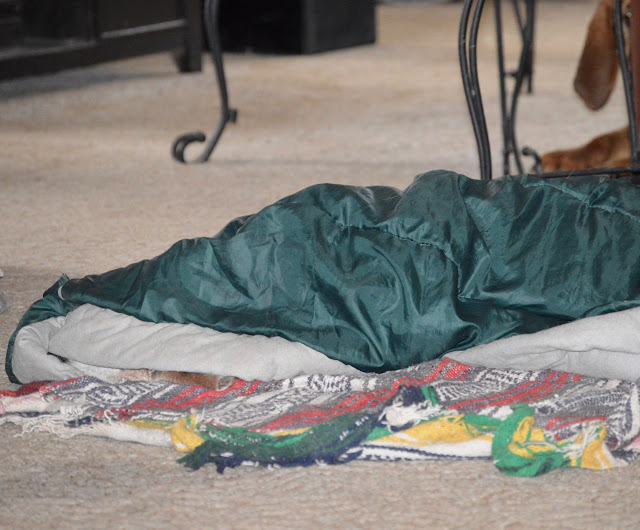 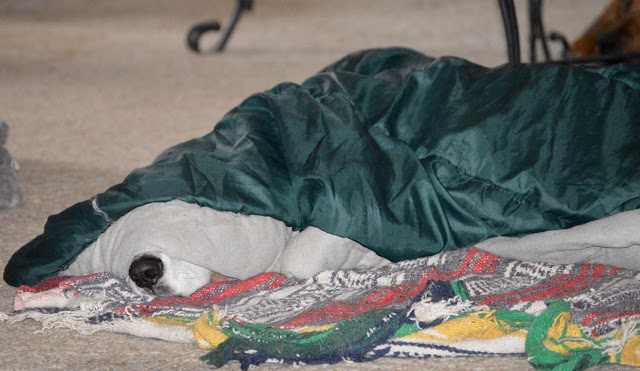 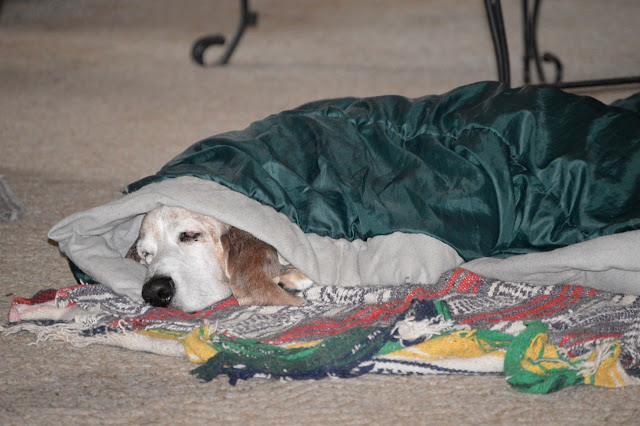 I hear a dog shaking, the sound of ears flapping. I look up and Winston has escaped the sleeping bag and has that look of needing some water. He drank a lot of water, I moved him back on the blanket and he was back to sleep within 10 minutes. 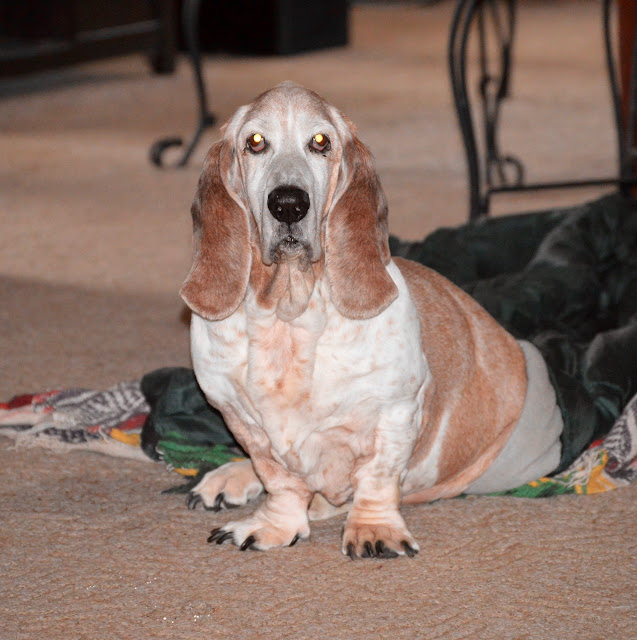 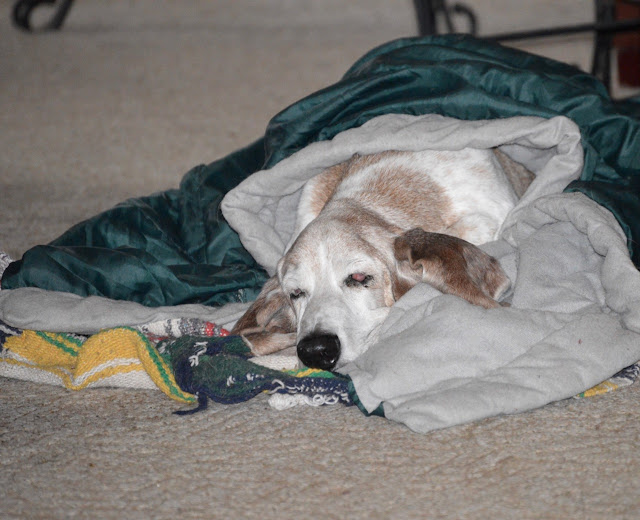 He is following the rules today -- LOTS of sleeping. He did get up a few hours later for some water, went outside and emptied his tanks. One thing I have noticed today, he knows when I am putting on the rolled towel under him that he is going to get to 'go' ... so he leaves before I can get the t-shirt in the proper position.


Late in the afternoon, with a light rain that just never let up, Sadie and Stella were getting a little bit of 'cabin fever'. They finally decided they needed a little play and I made sure they didn't get near Winston's non-gated area. All worked out well - take a look. 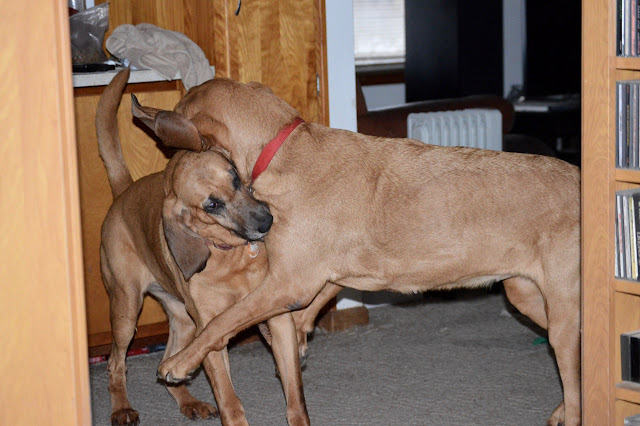 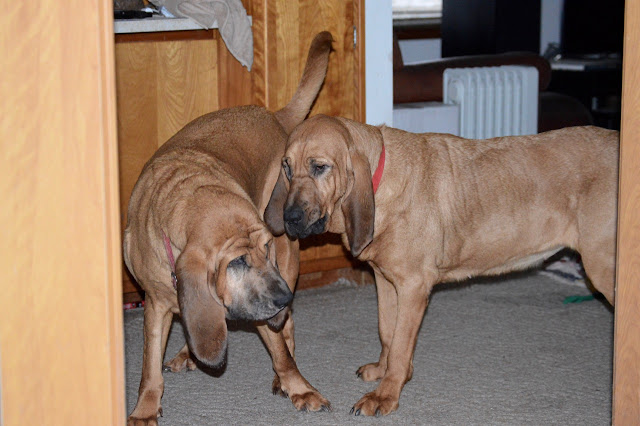 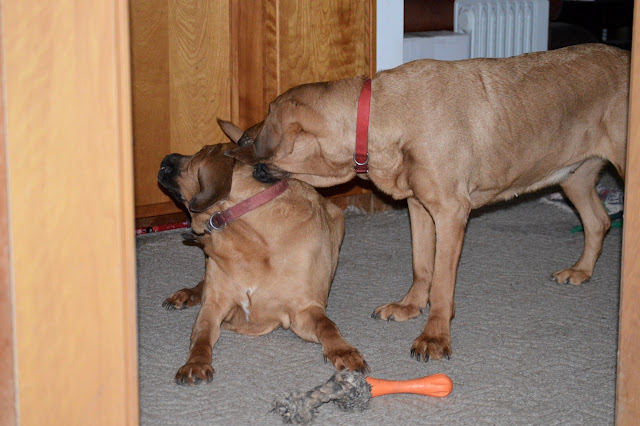 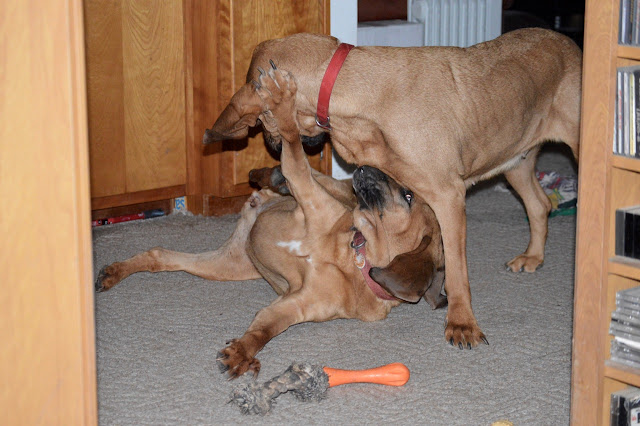 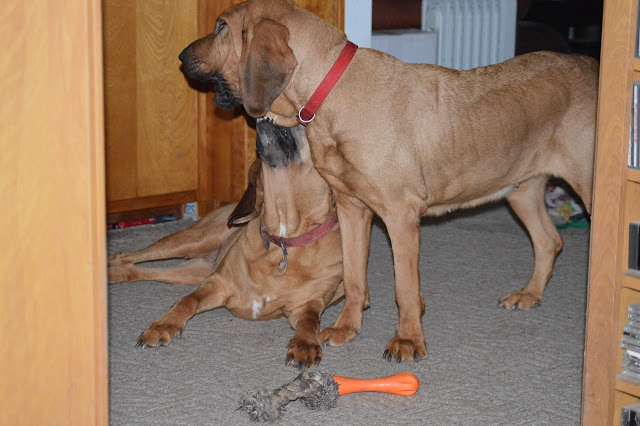 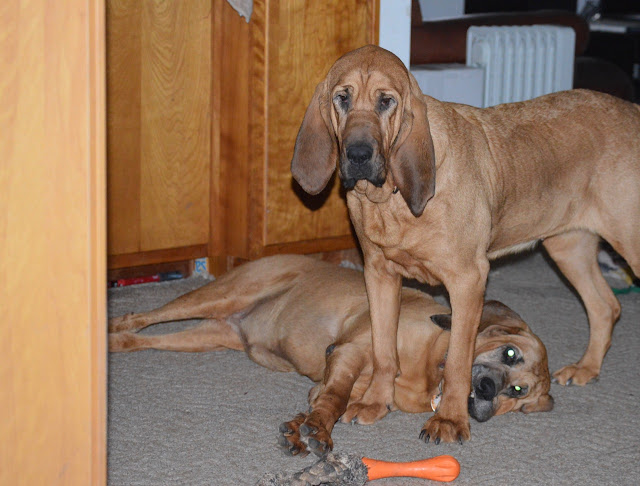 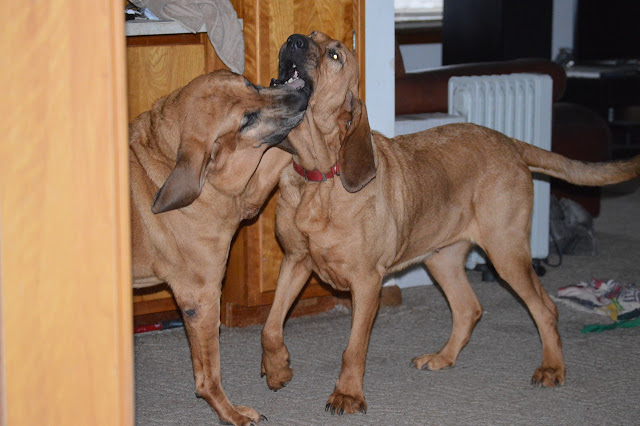 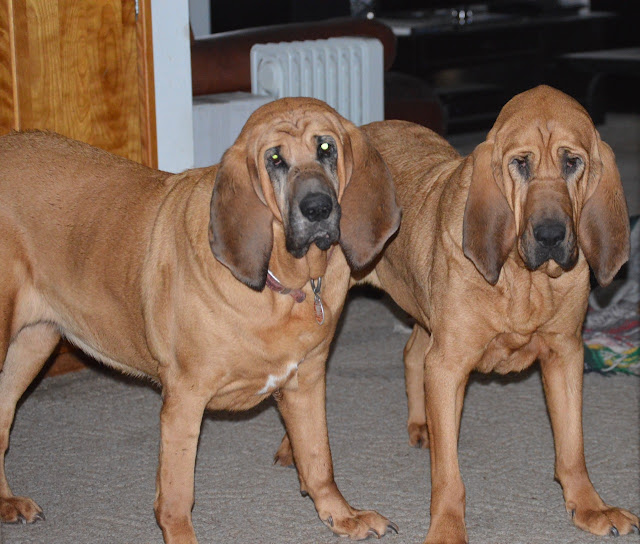 I didn't see it happen but right after we finished going outside before it got dark, Sadie decided to slide around Winston and sneak in between Winston and the wall. It's almost 6:30pm and they are both now asleep. 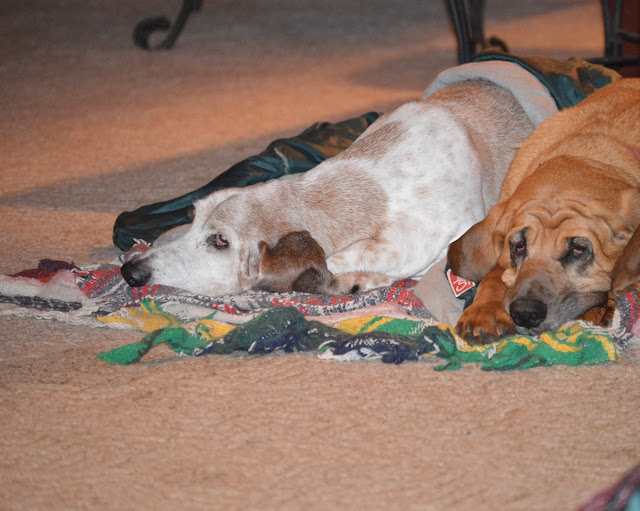