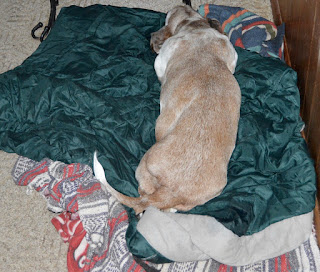 I decided since there is really not a definite end date to Winston's situation, there was really no need to start the title of every day's post with "Day # -" anymore. I mean that counter could go into 3 or 4 digits long ... who knows?  If we were doing a 7 day diet ... that might make it different.

As you saw in the earlier post, Winston spent most of the night in my sleeping bag. A little after 8pm he decided he needed to go out for the end of the day tank dumping effort. He did and then came inside and went back to sleep for the night. I traded my sleeping bag for the hounds Coleman sleeping bag, the one they camp with.

Some time around that infamous "3:09 am", he woke me up someway and needed to go outside. Plus the Prednisone will make him more thirsty than normal so he had some water before I carried him outside. With the flashlight on, I could see him not wasting time doing what he needed to do.

He slept solid until the bloodhounds and Heidi woke up at their normal time, sometime a little after 7am.

If you didn't know he was having problems with this back legs you would have thought this morning was just a routine day for him. He looked great this morning. Being gate-less, he walked (dragging rear feet) over to the bloodhound water bowl to have some of their water. I sat and watched from my desk to see what his next move would be, plus make sure that the bloodhounds didn't accidentally step on him. He turned and went back to his blanket for more sleep.

He looked a lot more like himself this morning. Alert, responding to questions, good appetite and mobile. He walked with my help from the blanket to the yard non stop for the first time, as he usually stops to rest before getting to the yard. He seemed pretty strong today.

Everything went smooth today. There wasn't any kind of crisis to deal with. It's only be a week since his back went bonkers with no known reason. The other hounds seemed to have found a new routine as well as me. All the hounds were fed a little after 12:30 but Stella was laying her head on my arm at the computer desk at 10:30 am ... I told her "no way" and she started what I call a soft howl but I think that may be the way she barks.

After that Winston went outside and did what he had to do before the 11 mile trip to the vet for his first K-Laser treatment. He was excited when I asked him if he wanted to "go" and actually started a little hop on his front feet before I stopped him. I grabbed the rolled up t-shirt and we took off for the back of the FJ. I had put the dog bed in the back so he would have a softer ride.

The treatment lasted only about 7 minutes. She said they have seen a lot of very good results with this treatment but of course ever dog is different so there is no date when I might see some improvement. He was pretty happy, wagging his tail the whole time on the table. He wouldn't be feeling anything from the laser.

He basically came home laid down in his non gated blanket/sleeping bag combo and has been sleeping all day and tonight. He will get up on occasion for water and I only take him out if he shows me he wants to go outside when I ask him. He will let me know now that he wants to and will wait for that taped rolled t-shirt to be placed under him.

On two separate occasions this afternoon while outside, while holding his hips up, I turned his paws to the correct position and very slowly lowered him down to see what a little weight would do and if he would try to stand. He did NOT stand but his legs did not collapse under him like they did last Saturday ... that was very encouraging. 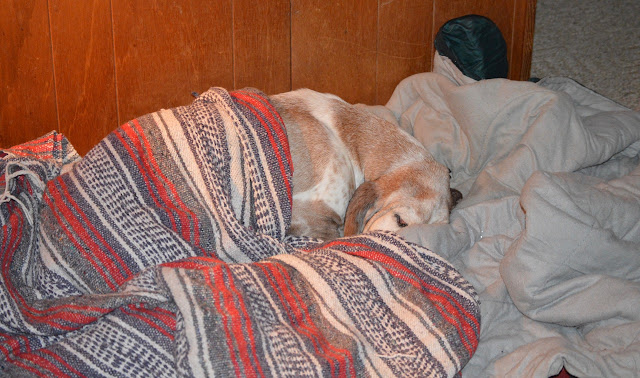 It started raining this afternoon pretty hard off and on. Luckily Winston has gone outside when the rain has let up but Sadie was looking for a place under the over hang near the house and Stella didn't care she was standing in rain.


I almost forgot but remembered I had no photos today of Heidi. I gave her a 30 minute soak in Epsom Salts. I could tell later tonight it really helped her skin that has improved with the dog food change. I think I can start those soaks on a routine basis while Winston is sleeping.

So that's about all tonight in the tropics. It's feeling good to get back to some kind of normal routine.
at December 26, 2015