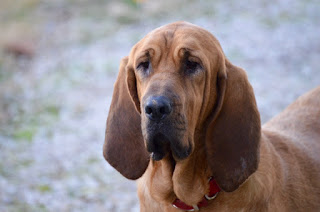 I thought Winston was going one step forward and two steps back when the day started. I found out later he had me fooled the whole time. In this case I was happy to be fooled.

I had the feeling by the way he acted, he may have tweak his back last night around 9:00. He went from moving around a lot to the point of being very still, quiet and immobile.

By that I mean he was back to gingerly lowering himself to his stomach, one short choppy step at a time. He does not lay on one side but lays down on his stomach. He did that every time since the 9:00 pm mark, when he wants to lay down.

Another thing I have noticed just this morning is each time I go to pick him up to carry him outside ... he lowers his head. Before, head up, tilting his head back to face me and even sometimes wagging his tail.

After the official start of the day at 7:39 am, I had propped open my storm door as usual so I could take him outside. Yesterday he was almost to the door on his own by the time I turned around. With the rolled t-shirt under his hips he charged across the carport floor.

Today have being fed kibble, the prednisone and water ... I took down the gate and he just sat there looking at me. As a test only, I said "come here" to see what he would do. Almost any other time except last Saturday, he would have come forward dragging his rear legs. Today nothing, not even an attempt.

When I went over to pick him up, he lowered his head. Outside I couldn't tell if he had peed or not. I sit him in the same spot in the backyard hoping he can cut down his steps in attempting to smell that specific spot that all hounds look for. Yet, he took off for to one of his spots at the other end of the yard, with his rear legs dragging behind him. Stella was concerned and followed him with her eyes all the way. I noticed when closing the door that he had peed while I carried him back inside. 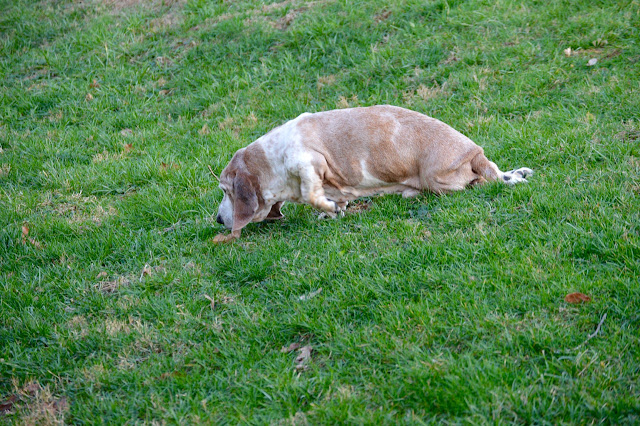 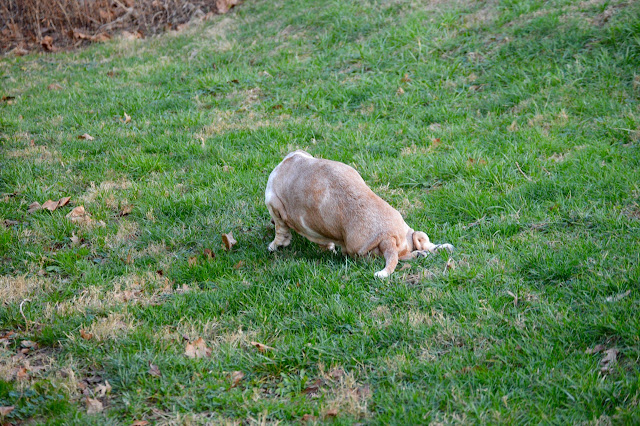 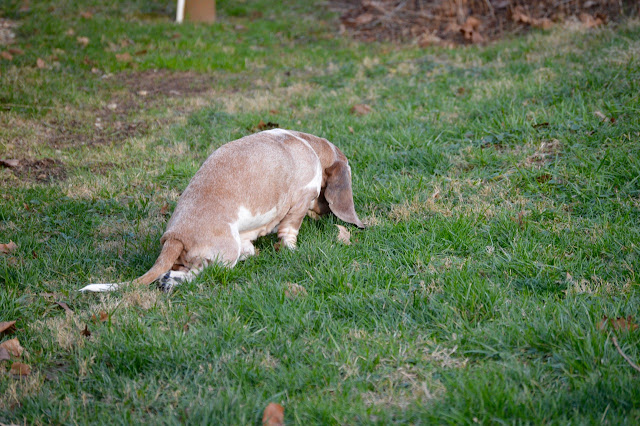 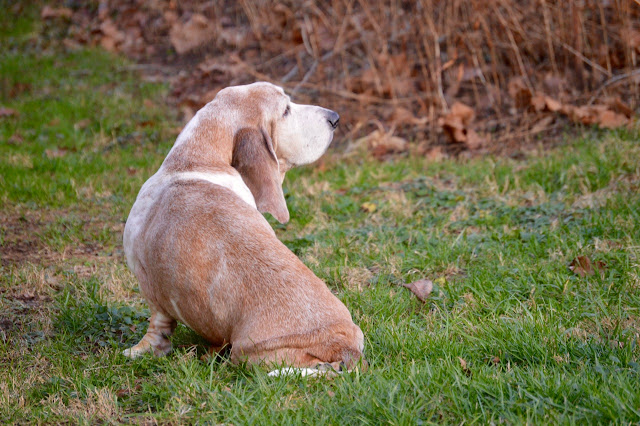 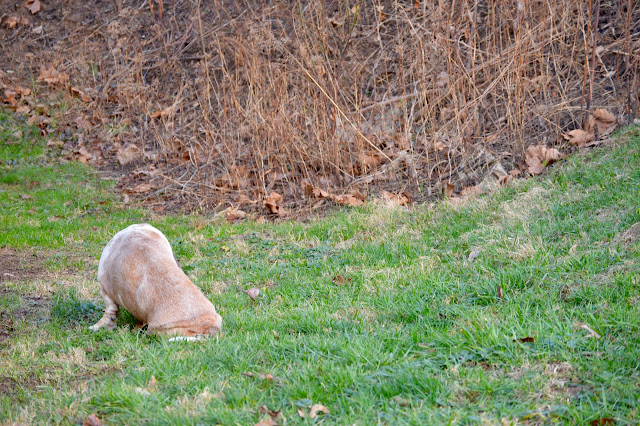 Stella's eyes followed him the whole way, until I went to pick him up and bring him back inside. She then escorted us back into the house safely. 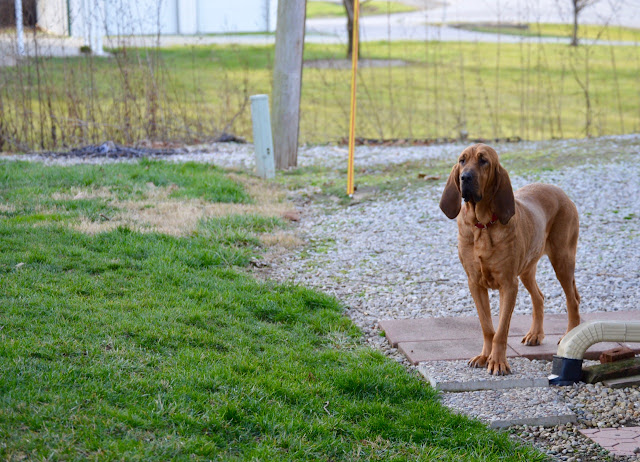 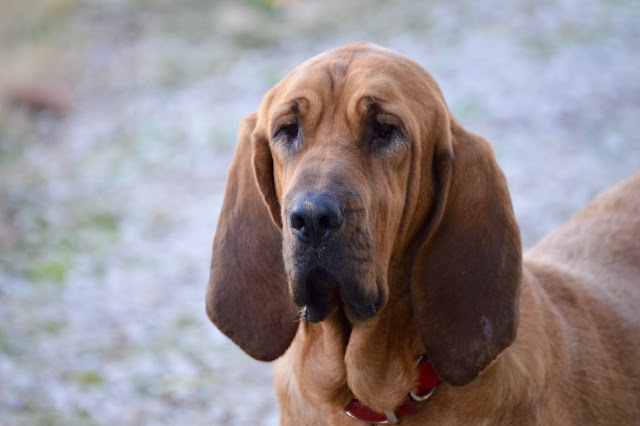 Last night around 7:00 pm, he was moving to rub each side of his face on the blanket and moving enough I thought he was about to attempt to roll over on his back when he laid over on one side. Now he hasn't done that in many years based on his chest and stomach development but it was that type of motion. He was moving a lot. Even laying on his side on his own was something he had not really done too much of since his injury.

Maybe he over did it, thus the step back in improvement this morning. He has been sleeping since I put him back down. We'll see how the day progresses.

About 9am Stella and Sadie wake up from their after breakfast nap. They are excited about going outside. Once again Stella's tail whips and hits Winston's metal collar that he wears only when I need to attach a leash to him (daily walk). What made him excited yesterday ... he did not make a move this morning .. continue to lay on his side.

After a trip outside cut short because Stella wanted to eat the dirt in the yard pushed up by yard moles, Winston had only moved his head to the other side. Maybe he is just in a normal sleep like he was this time yesterday. He lays there as Sadie stands next to the gated area looking down at him.

I had read before giving Winston pedrisone what the side effects were. In fact in the past he has used prednisone for a very short period of time after he 'tweaked' his back. I forgot that "lethargy" is a possible side effect. Maybe this is what is happening since he has just started his Pedrisone schedule on his 3rd dose.

I made another attempt to give Stella and Sadie some exercise outside while Winston was asleep. They started playing immediately but stopped suddenly when they heard the St. Bernard barking from the house across the highway and a little north of me. 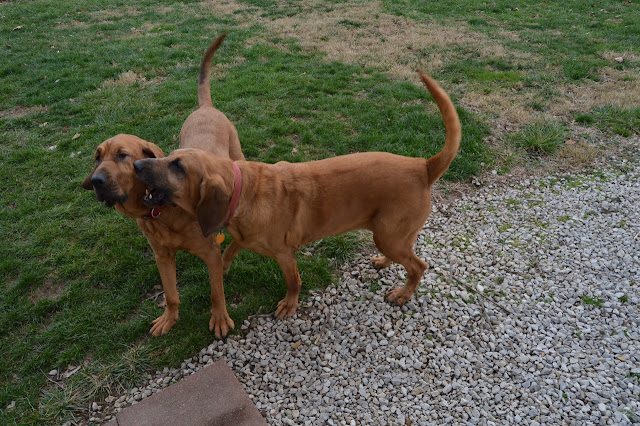 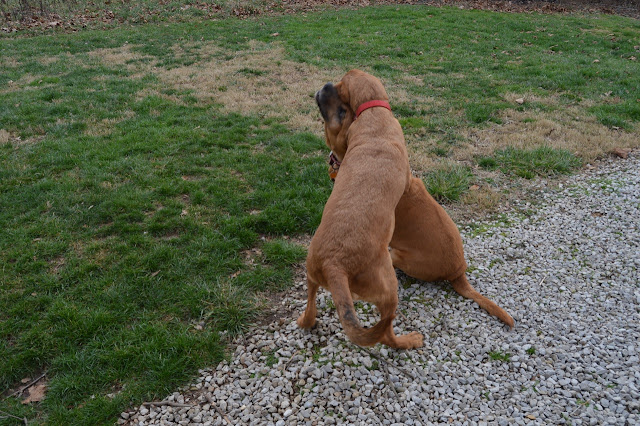 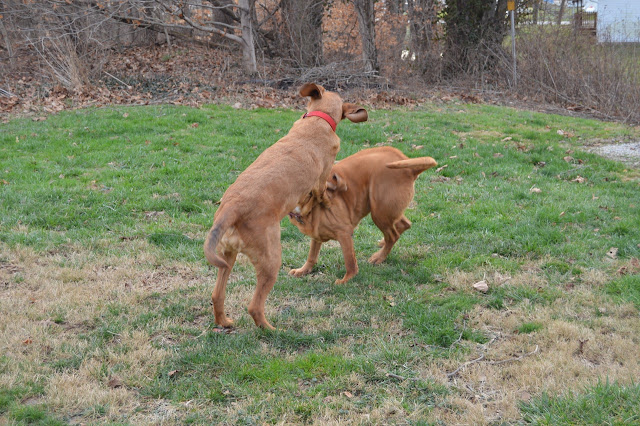 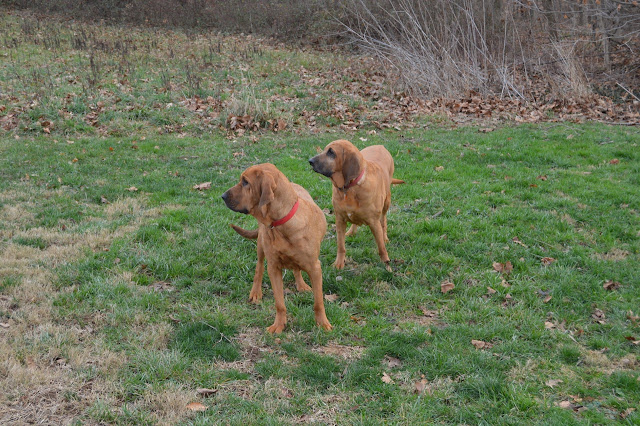 I find out a little after noon Winston was only sleepy and was resting this morning - nothing wrong with him. How do I know that? Around noon I drove downtown to pick up my call in order of Spicy Hot Beef Combo plus 3 egg rolls. As soon as I stepped inside the house Winston was sitting at attention with his nose in the air. Since I did not let him out of his gated area while I ate lunch, he split the corner of the box and gate and came scooting across the linoleum floor toward me, right between the legs of Stella, while sliding under her ... thinking he might get a taste of what I was having.

Back in his area he went for his own protection. Stella was prancing around excited and unconscious of what was around her or under her, thinking that she was the one that would get a taste of the spicy beef combo.

Soon after I finished just a 1/3 of the dish they gave me ... he was whining to go out. He "rode' the t-shirt under his hips from his blanket to about 10' into the field .. where he dump both tanks successfully.

Besides this, Stella has been coming over to my desk chair or the couch, wherever I am sitting .. whining, then laying her head on my arm before she lets out her howl telling me she would like to eat early today even though it's only been 4 hours since breakfast. She is a hilarious dog, and has a great personality.

This afternoon was so nice outside I couldn't stand the thought of staying inside with 3 days of rain ahead of us and temps finally dropping to normal in the low 30's. I decided after Winston was in the yard he could do whatever he wanted. Whatever makes him happy. It is just too hard to keep him confined.

He took off for the wooded area and by the time I could catch him he was headed over the edge into a small gulley. 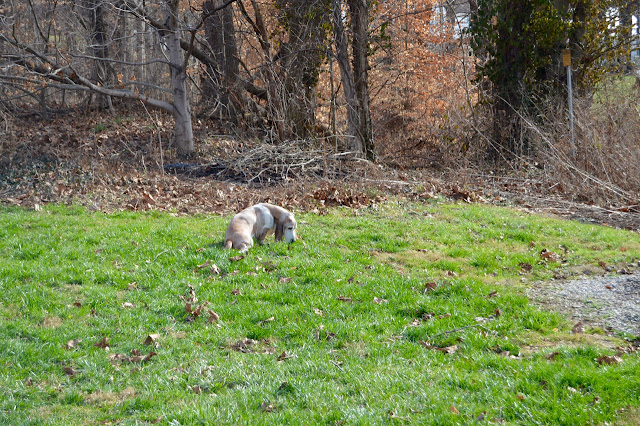 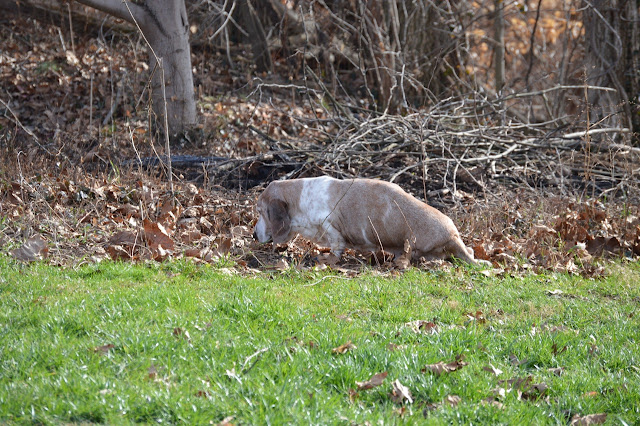 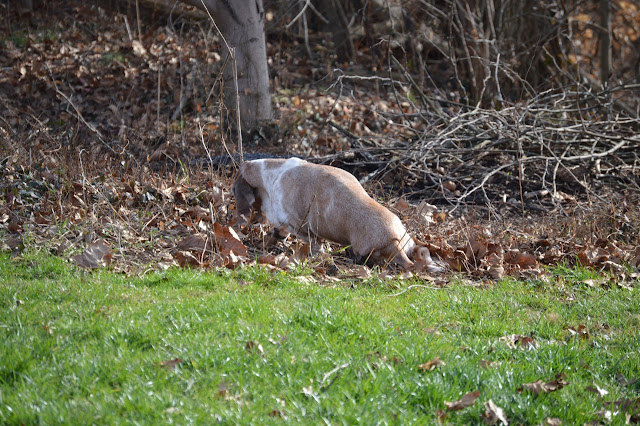 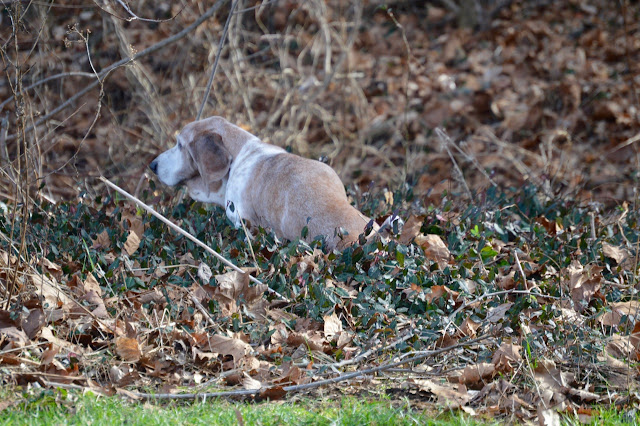 I leaned under the small tree branches, picked him up and carried him back over to his spot. He spent most of the time sitting there enjoying the beautiful day. As proof here is a shot of my thermometer inside the carport .. so it's 60° in the shade. 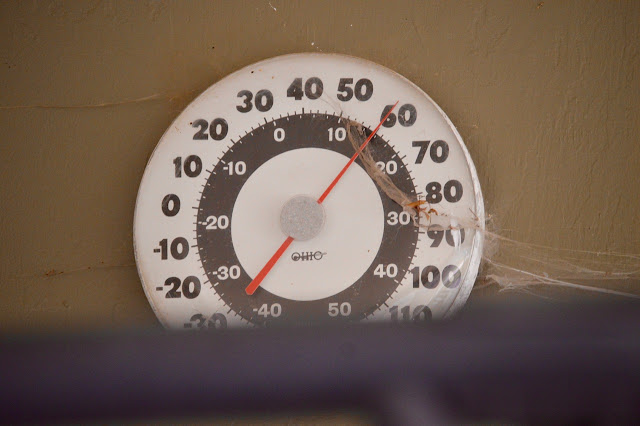 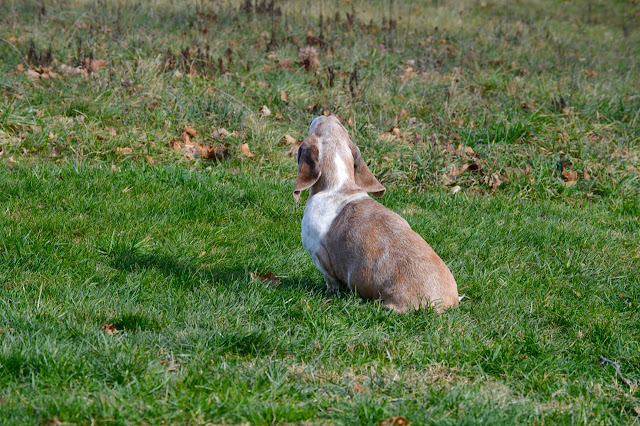 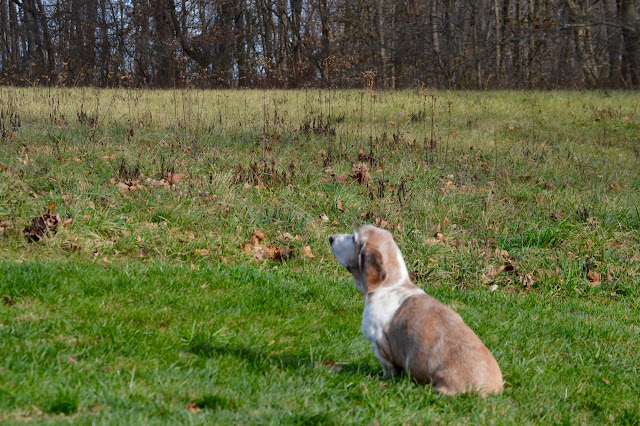 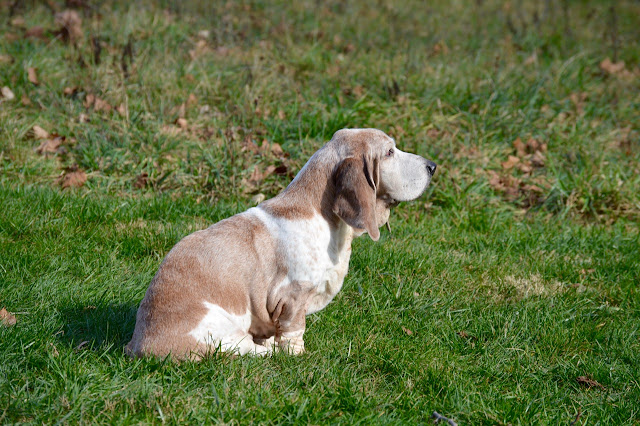 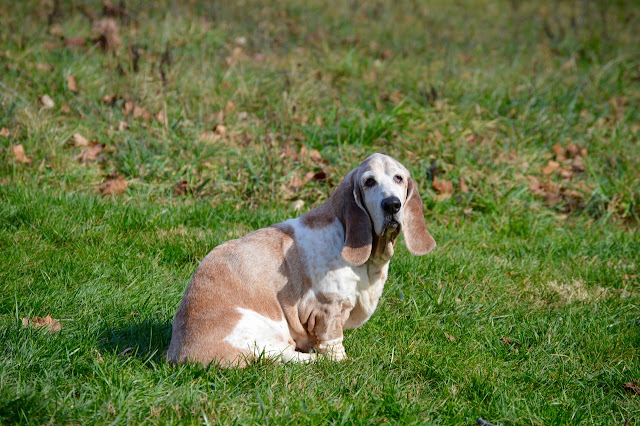 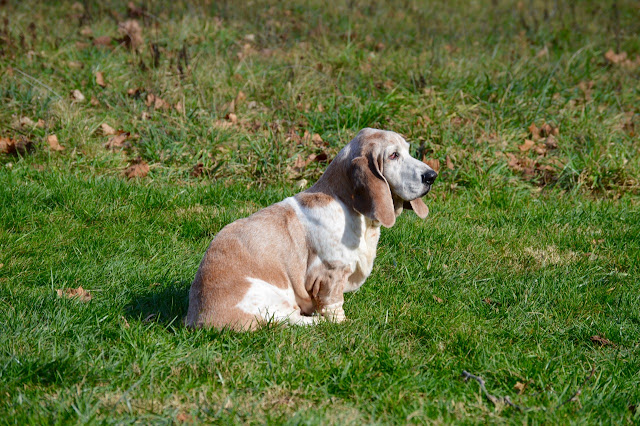 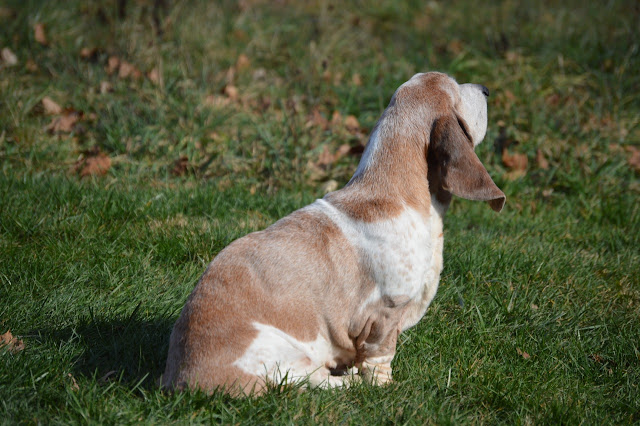 The other two bloodhounds did a little relaxed recon mission, low energy workout. 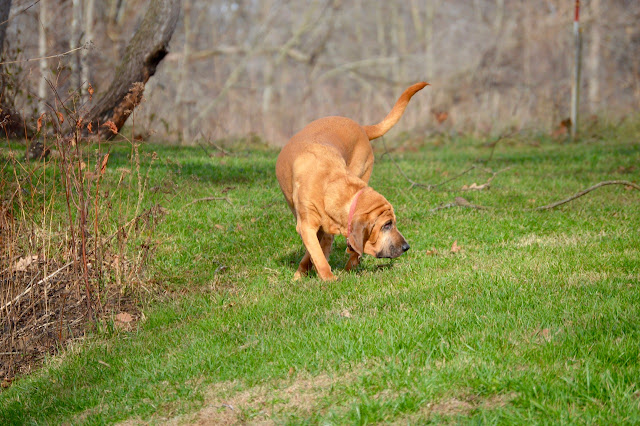 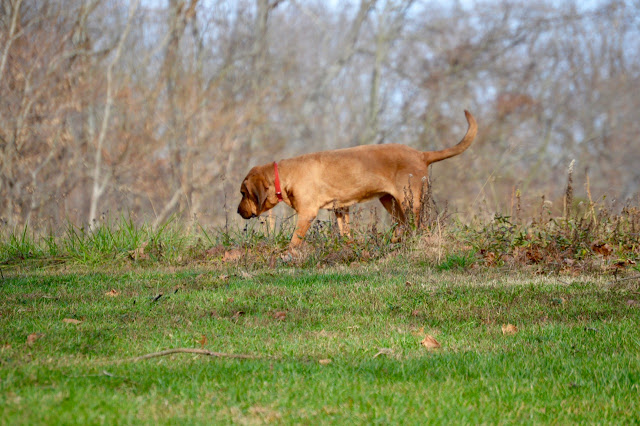 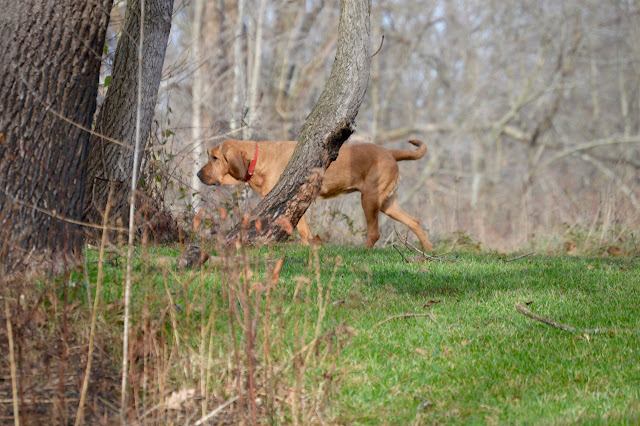 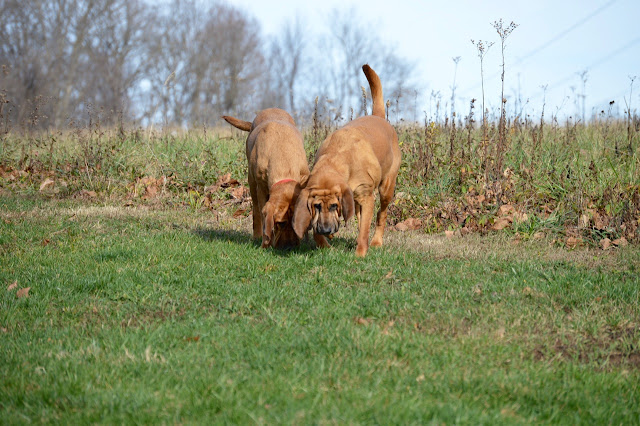 Stella was a little disappointed as I lectured her about the feeding times and that they would not be moved to an hourly thing like she requested. Breakfast and lunch will be served at the same time every day, not every hour.  :) 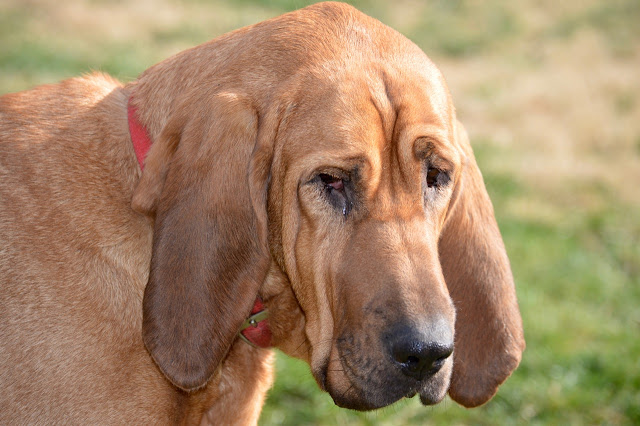 I realize this post is pretty long ... probably too long ... but when the day starts at 3:09am and you don't get back to sleep I guess that lead to more things to write about.

A beautiful day in the "tropics" of southern Indiana. Although I see from my post dated last year on the 29th I mentioned the photos were taken Christmas Day with an unusual high temperature of 41° in 2014.
at December 25, 2015