A Quiet Sunday Morning For The Hounds 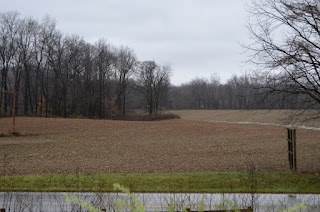 I guess blogging has become my relief. I have been blogging more than ever this past week. I don't have a desire to read, nor watch ballgames, movies and anything else. So these blog posts may continue to be more than once a day with photos.

Sometime around 11pm Saturday night I rolled out my Thermarest pad, sleeping bag, a pillow next to Winston's blanket area as I had done the past few nights. Every night he had been sleeping for hours by the time I felt like sleeping and I didn't want to wake him up but wanted to be able to hear when he woke up needing water or to go outside.

It was different though last night. Pad or no pad I could tell the floor had not been kind to my aching bones as I slowly laid down on the Thermarest Pad. The bluejeans rivets are not the best things to sleep on. Yet, I have to be able to go at a moments notice when I wake up in the middle of the night with Winston. About the time I caught myself complaining I just thought of Winston's situation ... case closed. I still loved the thought of sleeping in bed though as I dosed off on the floor.

Around 1:09am I had the wake up call. I never know what makes me wake up when I do. Winston never yells or cries in pain. I just wake up and he is sitting up staring at me. That means he wants 1 of 2 things or both ... water ... go outside. In the past week he has decided to lick his lips over and over ... I take that as "give me water ... a lot of water".

As soon as I came to my senses, I hear it raining so hard that it is pounding the roof. I clicked my phone for a time .. 1:09am. I remember how there was so much water the night before when he tried to go outside. I was tired, it was early and it was raining .. My thought process as I tried to wake up was ... I'll give him water but there was no way I was going outside just for him to stand there looking for a spot that he could not get to while it poured rain.


I was hoping he would break his "house rules" of almost 12 years and pee inside. I was prepared for that and on weather days like this I hope he would. I had placed a sheet of 6mil plastic under his first blanket to protect my old and worn carpet. I have plenty of blankets to rotate clean ones when needed.

Slipping the t-shirt under him, we head for the door that is still closed. He was walking and wagging his tail as we moved forward. I stopped him at the door, hurry to get the storm door propped up using the slider mechanism ... it is raining so hard I can barely see my fence only 32' away. As usual, when it's raining during his healthy days ... he heads right, around the parked Mini Cooper to the front area of mulch, under the overhang and pees. I don't know who was happier, me or him ... even at a little past 1am.

I decided I wanted to sleep in bed not on the floor when we came back inside. After packing 'his' sleeping bag, a small garbage bag to lay under the sleeping bag for 'just in case' on the bed ... I was asleep in less than 10 seconds after hitting the pillow.

When the hounds woke up around 7:09am, I felt great after almost 6 hours of solid sleep ... on a mattress. It was great! I'm good for another week.

Winston waited for me to get my shoes on, turn on the lights, let the hounds file out to the yard and help him down off the bed to start the walk to the yard. He made it all the way through the house, down two steps and out to the yard non-stop. Since he knew it wasn't raining, he made the left turn around the parked FJ and headed for the yard. He didn't take time to look for a spot ... he peed as soon as he felt grass.

Food, water and meds were fed and ingested without hesitation and then he packed it in for a morning nap under his sleeping bag. I can tell the Pedrisone is making him more thirsty and that leads to more peeing. 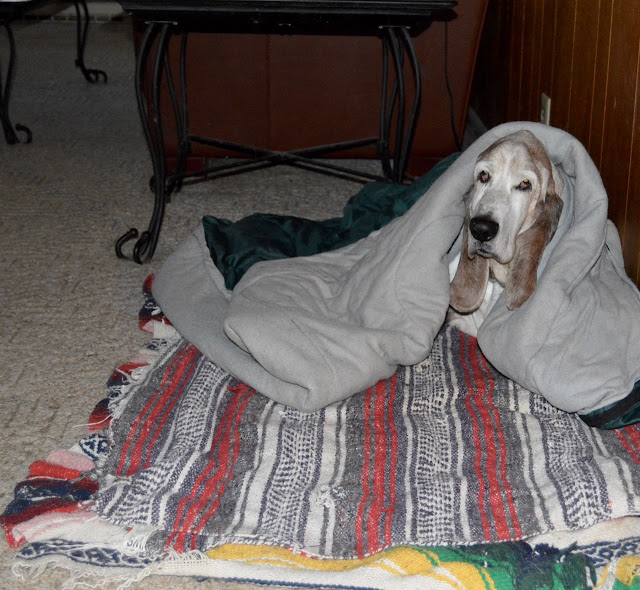 Sadie and Stella have picked up on the new routine. Everything is the same for them except the excitement and playtime after they eat. They use to do a little easy-going wrestling inside .. but some how they know something is wrong with Winston and if he is sleeping ... they are sleeping. 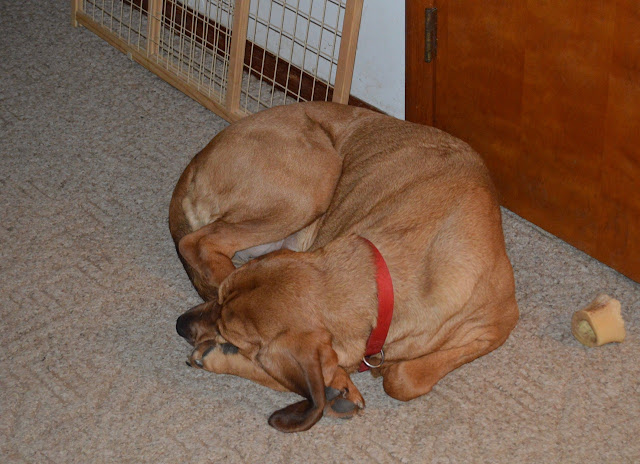 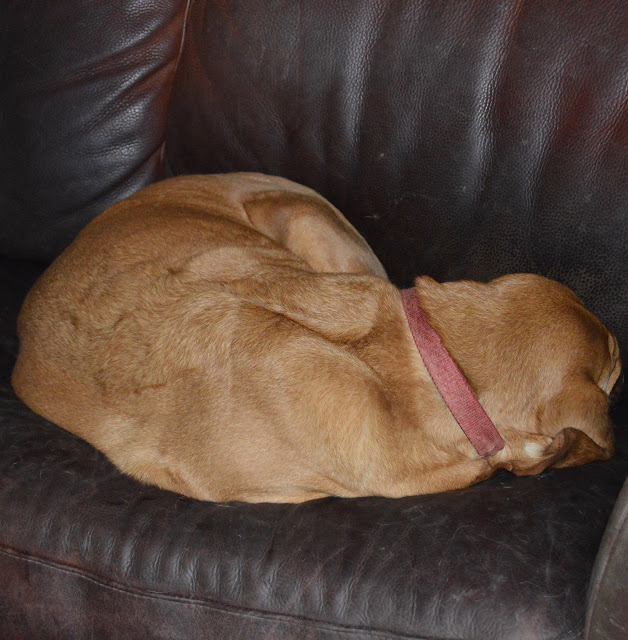 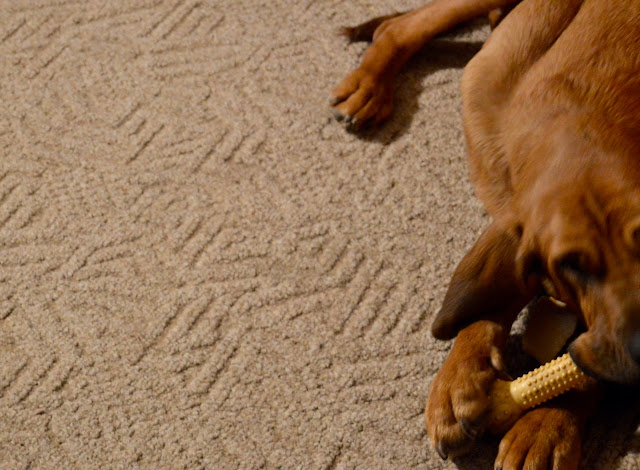 Sadie is really concerned ... sad, about the situation and has been since the start 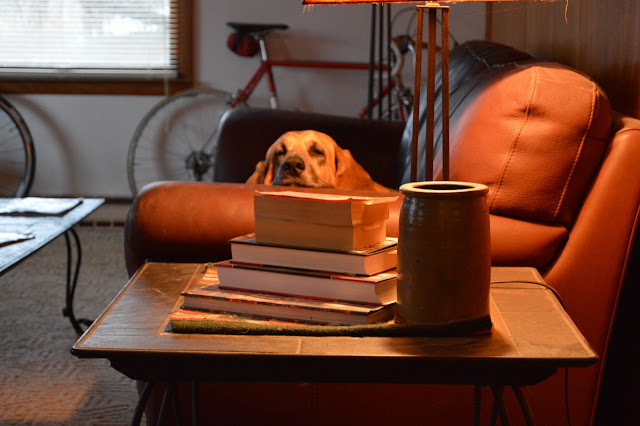 Winston seems to be in good spirits this morning but he is peeing more than he has the past week. I wonder if the Pedrisone has really kicked in. More thirsty is a side effect, which leads to more water drinking and it has to come out sometime. With another 24 hours of rain forecasted, I have brought out the Columbia hooded rain jacket and we will stand outside as long as Winston wants ... unless it's a downpour.

He does perk up when I ask him if he want's to go outside. You'll notice his right rear leg is straight out. It will not bend and I've noticed during my massages it has not bent in the past few days. It will flex at his ankle. Hard to tell with legs that short but its right above his paw. 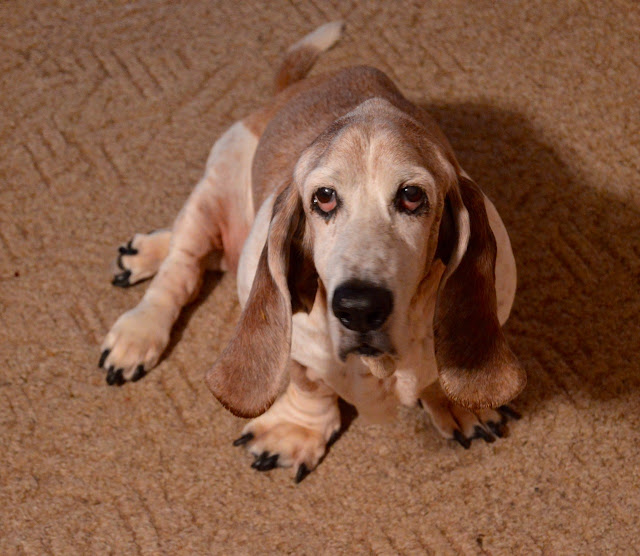 At halfway through the day, Winston has been pretty restless this morning. He can't sleep. Sleeping bag on and off. Outside trips and then nothing. I wonder if the laser treatment has activated some bladder issues and restlessness. 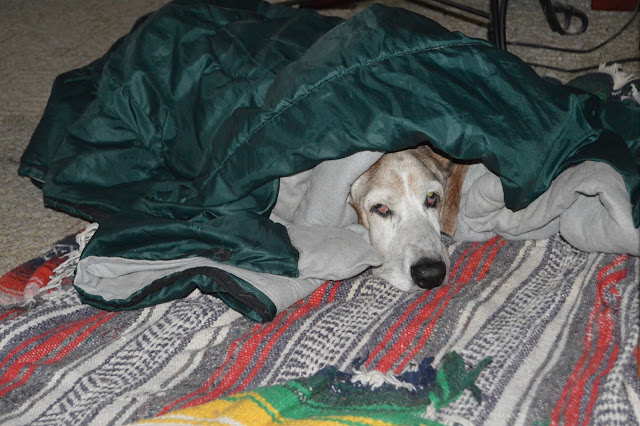 As you can tell we've had a lot of rain in the past 18 hours. 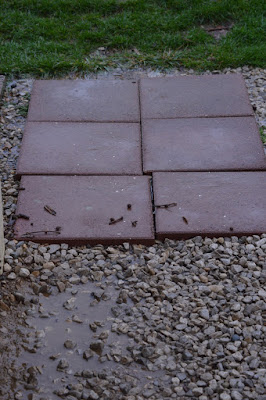 With a lite dropping of rain, Winston snooped around for a spot and eventually peed quite a bit as I held his hips higher to give him enough clearance. Ground clearance is a tough objective if you are a basset hound. 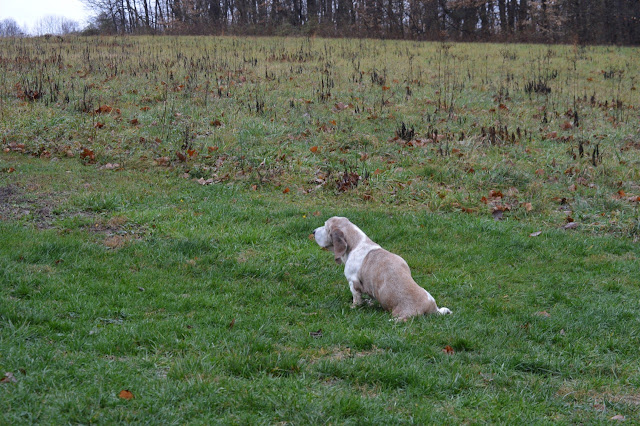 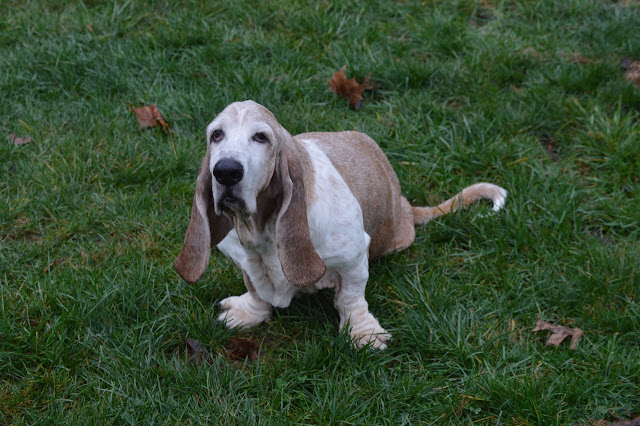 Stella is timid around Winston, somewhat cautious and a little confused. She wants to touch noses with Winston but has a slight fear to be close to him. Sadie was in the searching mode but sprinted back to the house as soon as I picked up Winston to return inside. 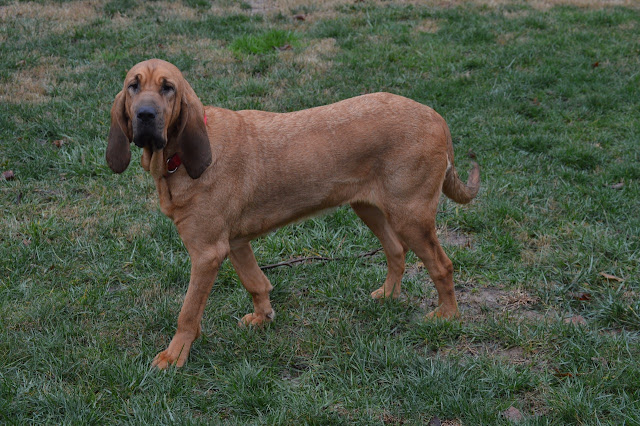 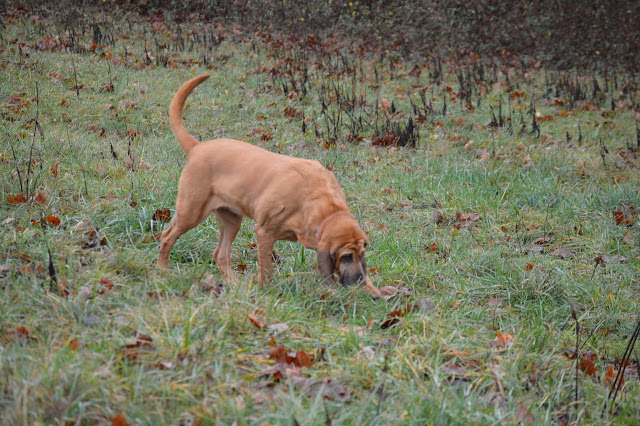 At least it's still warm at 49° this morning. I think I would trade high 40's and rain for sunny and mid 30's here in the tropics of southern Indiana. That will be happening in a few days.

As I post this Winston has been sleeping soundly for the past hour.
at December 27, 2015
Email ThisBlogThis!Share to TwitterShare to FacebookShare to Pinterest
Labels: Heidi, Sadie the Nurse, Stella, Winston's Status