Another Solid Day For Winston 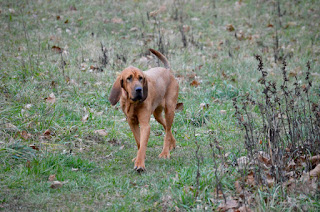 Last night as I glanced up, I saw I had been sleeping sitting up on the couch for an hour. All the hounds were sleeping with Sadie and Heidi snoring. It was only a little after 9pm. I didn't want to wake up Winston, thinking sleep was better than anything. So I turned off the light and headed to my bedroom. It was a chance I was taking since I had not slept in separate rooms with Winston since he was hurt.

I woke up at the "new normal" 3:09am. Not sure why but that seems to be the time lately. Darkness, really quiet, not a sound from the hounds. I wanted to see how Winston had done after his solid 8 hours of sleep by then. As I looked around the corner, Winston was still sleeping ... Heidi had moved into the confined area via under the end table and was sleeping next to him.

As I was moving around the house, Winston sat up, wagging his tail over the soft inside liner of his Coleman sleeping bag. I gave him a bowl of water, then slipped the t-shirt harness under him as we walked out the door ... his tail wagging.

Winston had been able to control his bladder for over 8 hours and slept most of those hours. That's not out of the ordinary for him, except for Sunday where the Prednisone may have played a part in a  couple of accidents by him. Of course when I turned the lights on the bloodhounds woke up ready to escort us outside and a chance for them to dump their tanks.

Back inside Winston went right back to sleep in his confined area. To me that was a great sign that he was feeling better. The last time I had seen him awake was a little after 7:30pm Tuesday night. According to my color coded spreadsheet tracking Winston's health, the last two days/nights have been solid and signs of improvement.

The rest of the morning was normal. I took Winston over to the vet's at 8am for his 2nd Laser Treatment. He loves riding in any vehicle, so traveling is not a problem. He rode over in back of the FJ on the dog bed from the bedroom.

The hounds didn't do much in the morning ... went outside a couple of times. Pretty lazy. 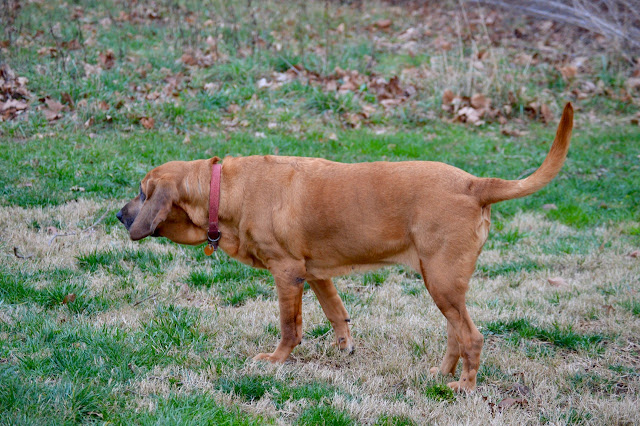 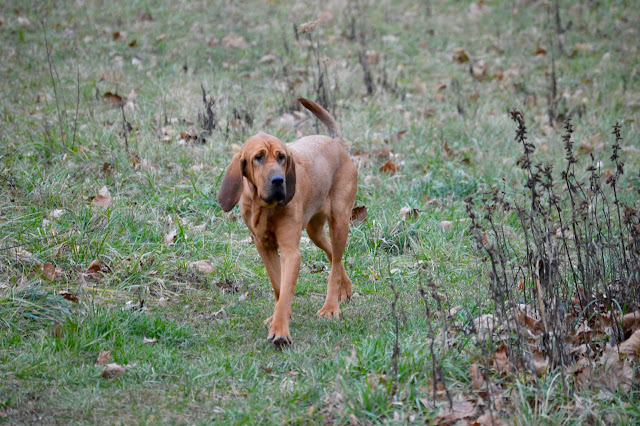 I am not sure what the laser treatment does for Winston immediately. I know what the purpose is. Soon after he arrived back home after his 2nd laser treatment this morning he fell into a deep sleep. That's a good thing. I could only equate it to coming home after I get an 1-1/2 massage and sleeping the rest of the day due to the relaxed feeling. 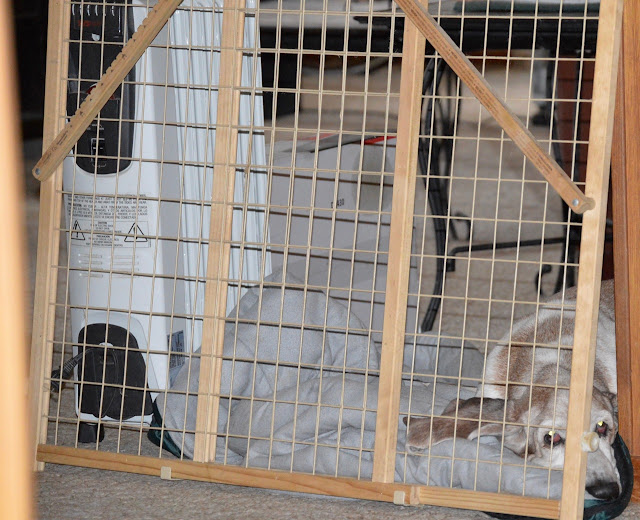 Sometime around 2pm I turned off my IU basketball game that was ugly for major college basket ball. Winston was still sleeping since his lunch. I left him there and headed for the bedroom for what i thought was a short siesta. An hour and a half later I found that out to be not true. I wake up hearing something ... yes you guessed it.

Winston had escaped from his makeshift jail and had walked dragging his rear legs from the corner of the living room, around the corner, down a short hallway and into the bedroom ... he was lying on the dog bed on the floor, whining to get up on my bed.

Yet with the new rules installed after reading the link last night on how to treat a disc problem for a dog, I carried him back to his living room confined bed, reinforced the side of it where he pushed out the box and heater to move between them. I went back to bed since I was that tired and slept until 5:07pm.

Winston was still asleep when I peeked around the corner. It was good to see him sleeping a lot today. So at that time it was the normal routine.


Only this time, as I open the door, sitting on my step is a delivery from FedEx .. a gift from my college friends scattered throughout the USA. A box from Lou Malnati's Pizza Taste of Chicago ... 2 deep dish pizzas along with a deep dish apple pie.

Of course the hounds are all excited as I open the box...they ALWAYS assume food - even Heidi comes sprinting from her bed. Winston curbs his excitement and doesn't move a lot but his tail is wagging 90 mph.

So the first pizza went into the oven, the apple pie went in the oven after the pizza was done ... I should have used the two ovens I have not just the smaller one, I guess. 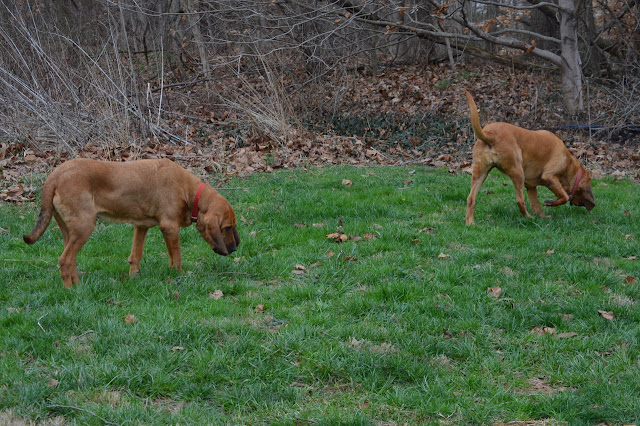 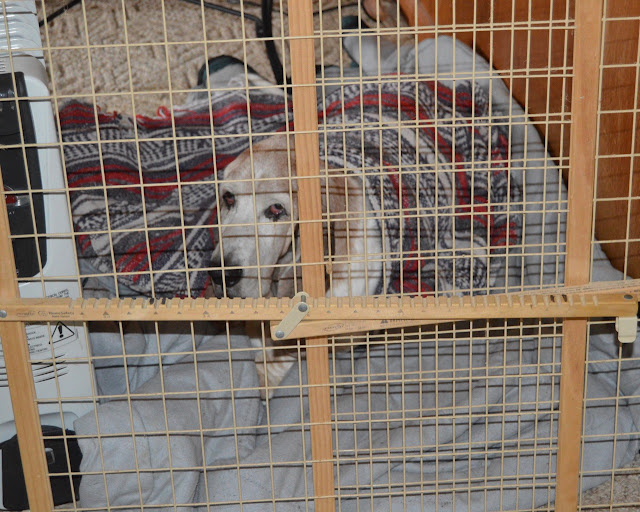 Sometime around 6:07 pm, Winston has decided once again he has had enough "bed rest". Whining to get out. When the gate comes down he wants to walk dragging his feet as I stop him. Take him outside to only find out that he wants to walk forever in the front yard acting like he is looking for a place to pee or poop ... before I realize he is just wanting to walk!! LOL
He finally gives up hope of escaping around 6:34 pm. 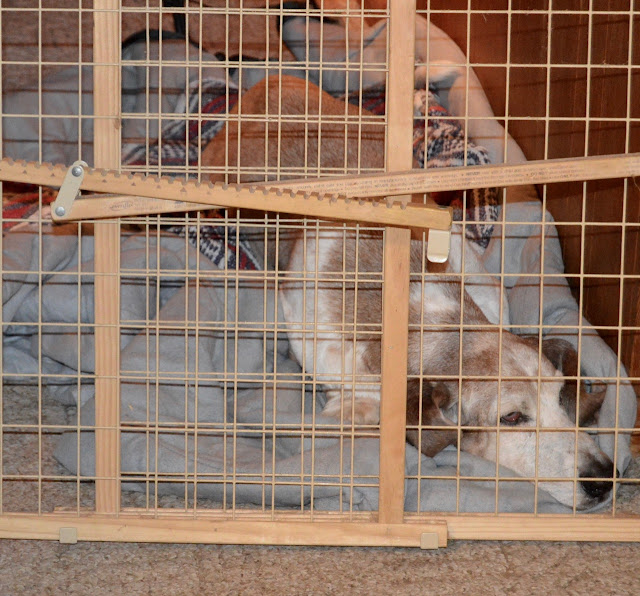 Winston is still sleeping almost 2 hours after he smelled the pizza ... He has had 3 GREAT days in a row.  Wagging his tail a lot when he is awake. He is either confined or outside to pee ... no exceptions. I do make a point of sitting on the floor a lot, hanging out with him and discussing the plan, reassuring him that he's alright.
I have some wire panels on order from Amazon to help in containing him. Thank you to those that emailed me tonight asking if things were okay. All is okay, just a little late posting due to my nap and then enjoying that Chicago deep dish pizza .... then as I try to add photos, Blogger doesn't want to cooperate.
All is good in the "tropics" of Southern Indiana.
at December 30, 2015