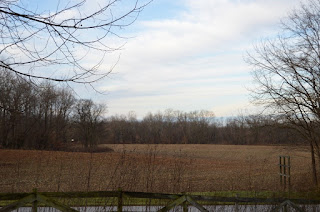 Sometime after lunch yesterday I had the feeling that Winston was not feeling good. He had whined most of the afternoon, slept very little like had the previous days and one thing that really started to worry me ... every time I had picked him up on Wednesday he cried a little. That told me something was injured or hurting inside him.

Of course with the heavy storm activity that was not a real help to getting him to dump his tanks outside. He is house trained too good to go inside. With the heavy storm winds and a very wet carport, he wouldn't go there either ... so he didn't go at all since his last around 1130am. Even into the night he would just sit there.

In previous days as soon as I would open and prop the door open before I would go back to pick him up, he would always take off dragging his legs and try to get out the door. Not yesterday afternoon nor last night.

He was restless ... couldn't find a place or a comfortable position for him to lay in to sleep. I also noticed he quit laying on his sides and when he did lay down he would move his front paws outward in short choppy steps one foot at a time. Then would lay down but only on his stomach.

All through the afternoon watching him and hearing him whine at different times, I thought we might not even make it to treatment and I might have to put him down. You could tell by his eyes that he wasn't feeling well, even though with basset hound eyes that is sometimes hard to tell any day, good or bad.

I called the vet office and was able to connect with my regular vet and who just saw Winston last week for annual rabies shot and annual check up. He passed with flying colors and has a very strong heart for his age.

He decided a different treatment than the 5 days of Rimadyl and see if he would come around. They gave me a 40 pill Pedrisone schedule, heavy at first and then tapered down in 5 day increments. Also the big news is, Winston will get his first K-Laser treatment on Saturday afternoon. Those will take place twice per week.

After reading about the laser treatment I am feeling pretty encouraged although I know there are no promises. The pednisone I have used on past basset hounds I've had and even at times Winston has used a small dose when tweaking his back.

So was we turned out the lights last night I was not sure what was in store for today .. Christmas Eve. I took his gate down, gave him a pillow and placed mine next to it. Opened the sleeping bag up and crawled in for what I expected to be about a 3 hour nap before I would hear him whining to go out.

The GREAT news is ... he slept through the night until the bloodhounds woke us up around 630am. I slowly picked him up with both arms under him ... no yelping!! About the time I get to the open door to go outside I see a shooting stream of pee, something I had not seen since the last time I changed the diapers of my friends little boy ... too many years ago. That shooting stream lasted at least to the driveway maybe longer.

Luckily the storms with tornado warnings yesterday afternoon had blown through there was a clear star studded sky with a full moon that was bright enough I could see what Winston was doing. Since he had dumped his tanks on the way, yes about the time we got to the driveway he dropped "firm bombs" from the drive into the yard as I carried him.

So as he sat still with his nose in the air sniffing the breeze. Stella and Sadie stayed nearby but found their spots to dump tanks, while I enjoyed the clear sky and full moon. We did the normal routine of piling back in bed before their breakfast and sleeping a few more hours. That bed mattress never felt so good. We also got about an hour of sleep longer than normal until 838am.

All the hounds had breakfast, water. Winston has figured out his new kingdom is the living room blankets gated and blocked. He seems fine with that today as he lays there sleeping since breakfast. 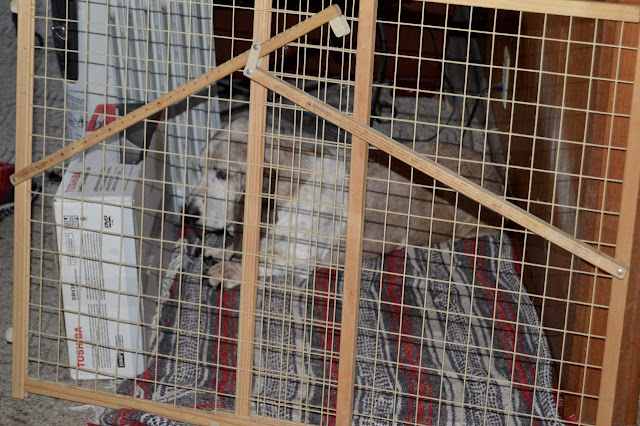 The bloodhounds??? Well they are playing quietly and almost like in slow motion ... my only guess is they don't want to wake up Winston. After I post this the Sadie, Stella and I are headed outside where they can blow off some cabin fever.

Stella did patrol the perimeter for the first time in a long time this morning. 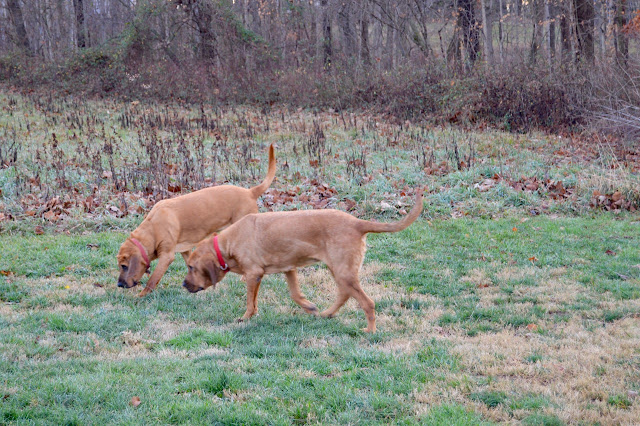 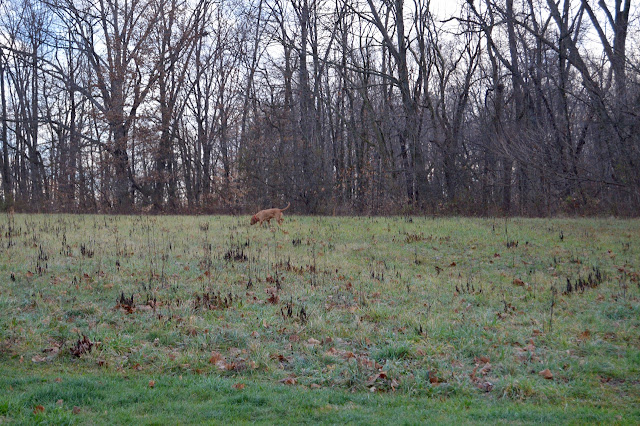 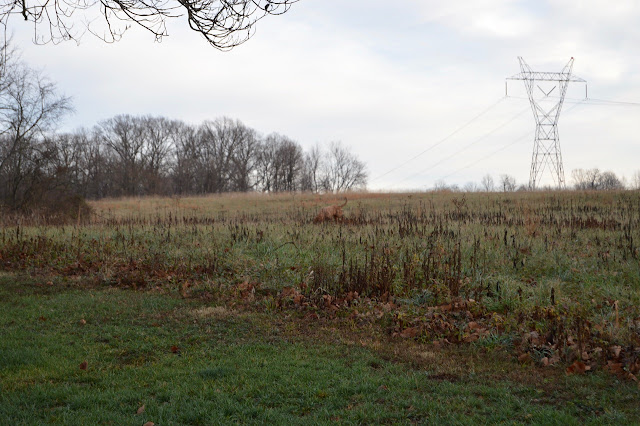 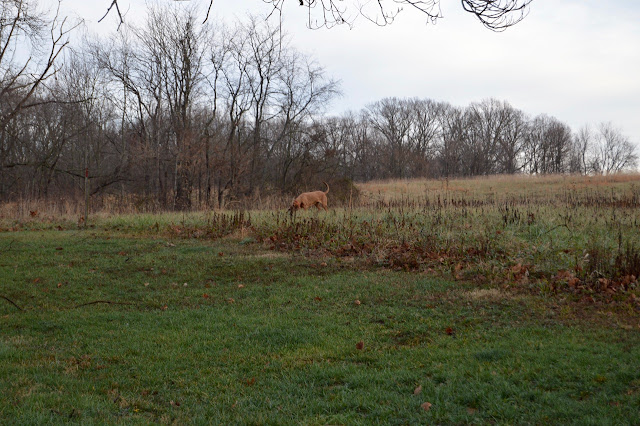 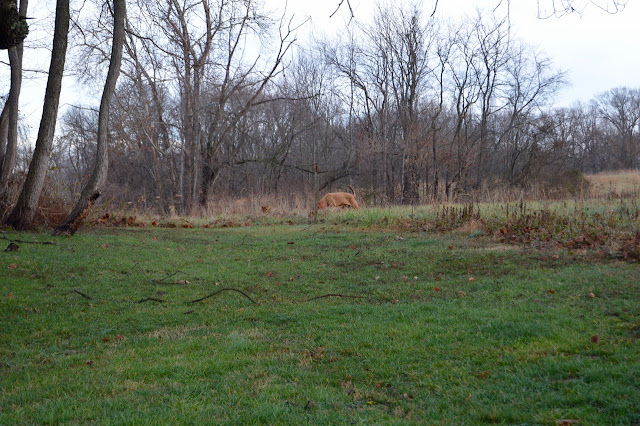 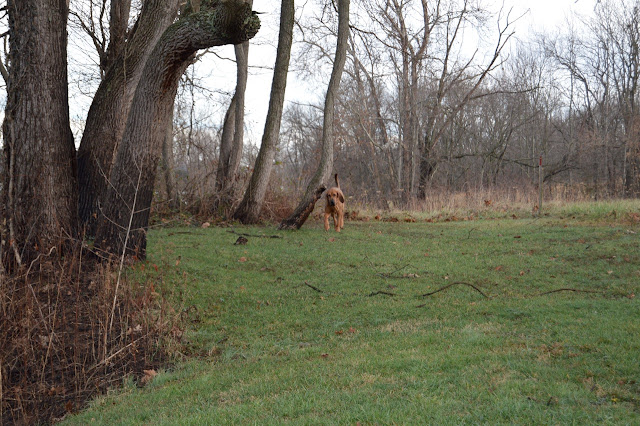 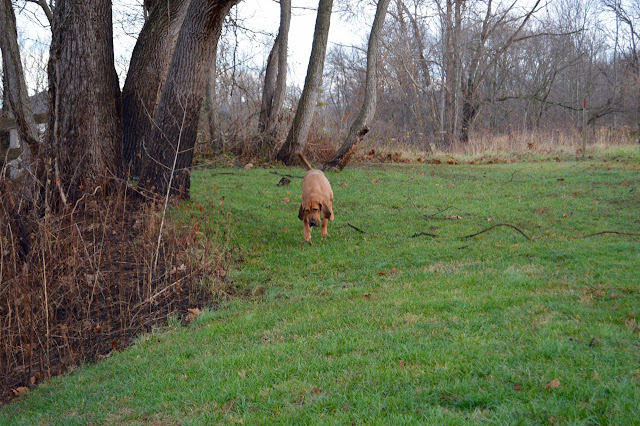 Merry Christmas everyone ... with extremely warm weather today it doesn't have a "feel" of Christmas ... reminds me of the times I lived in southern California.

That's it for this morning from the "tropics" of southern Indiana.
at December 24, 2015
Email ThisBlogThis!Share to TwitterShare to FacebookShare to Pinterest
Labels: Christmas Eve, K-Laser Treatment, Pedrisone, Winston Treatment