Winston Has More Signs Of Improvement 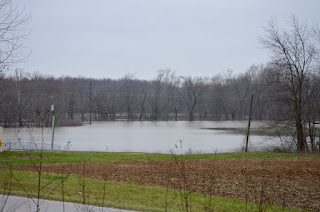 Again this daily post starts off where the previous night ended. Last night that was around 1am as I turned off the Holiday Bowl from San Diego early. Good game but my desire to sleep was winning. After sleeping all day, Winston continued his slumber just like he is suppose to.

I did notice something around 10:30pm while he was sleeping that I had not seen in a while. While laying on his side I could see his rib cage. Finally that area that is normally his waistline was visible once again ... just one of the new small changes. 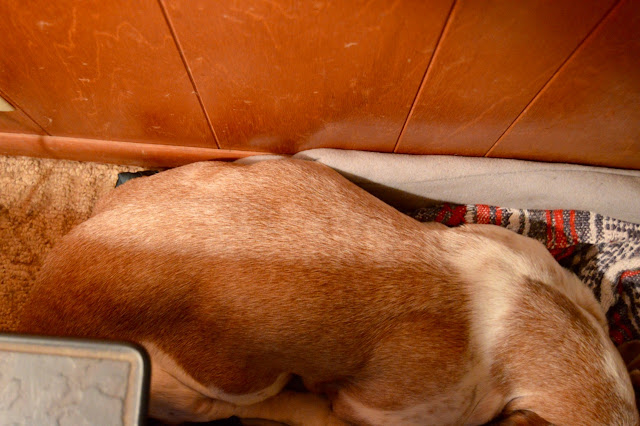 He was sound asleep when I went to bed. So I did the same thing before, I headed to my bed in the next room and left him be. Around 4:44am, Sadie and Stella came into the bedroom whining loud enough to wake me up. I could hear Winston whining in the distance. For the first time I remember he turned down his water. Yet, he was anxious to get outside and pee. I slipped the t-shirt harness under him and we went walking for the drive, his tail wagging all the way.

After sleeping another hour, where the bloodhounds had spent their time on the dog bed and at the foot of the bed on the floor, Sadie and Stella jumped up when they heard Winston whine and ran out to him. This time he guzzled water, then the same routine as always ... harness, tail wagging, walking toward the yard/driveway.

This time I kept the harness under him out in the driveway to see if he would walk back to the house, he didn't. He made a right turn and headed for his area to poop ... over by the southern edge of the yard along 'his' embankment. Firm stool and normal color -- a healthy sign.

It was during this walking to the edge of the yard I noticed a very slight "new change" ... with his right leg out straight, right after I sat him down thinking that was where he wanted ... there was a slight motion like a oar, using his right leg a little to move forward in a rowing motion while he scooted only a foot in distance ... another "new change"

On Winston's trip outside around 10am, HIS LEFT REAR PAW WAS IN THE NORMAL FORWARD POSITION AND HIS RIGHT REAR PAW WAS TRYING !! I feel this is a GIANT improvement for his recovery. I still had his hip elevated with the t-shirt harness.

Since December 19 his rear paws have been dangling facing the opposite direction, to the rear instead of pointing forward.


All of the hounds slept most of the morning if not all of it. Around 11am they all moved into positions think the first college football bowl game started at 11am...once they found out kickoff was not until noon, they just slept.

I decided that since Winston did so well the last 3 days/nights ... he needed to be rewarded, no matter what that link about bad backs said. I moved him up to the couch (under my supervision) next to me until he the next time he had to get up to go outside ... yes, he'll get carried off the couch to make his periodic trips outside. 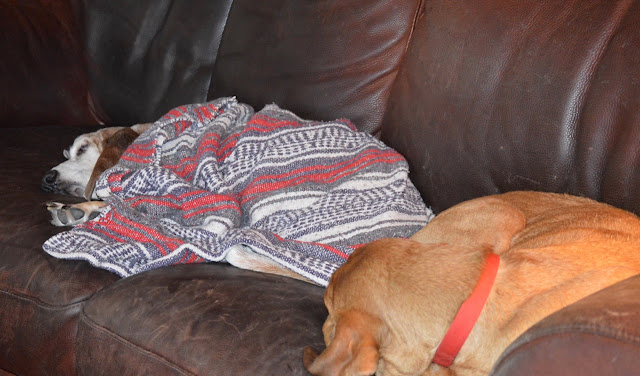 As I write this it's 12:34pm and not a word...not a word from any of them wanting lunch. Stella is usually begging me for food by 11am if not earlier. Instead she spent most of her morning chewing on her favorite bone. 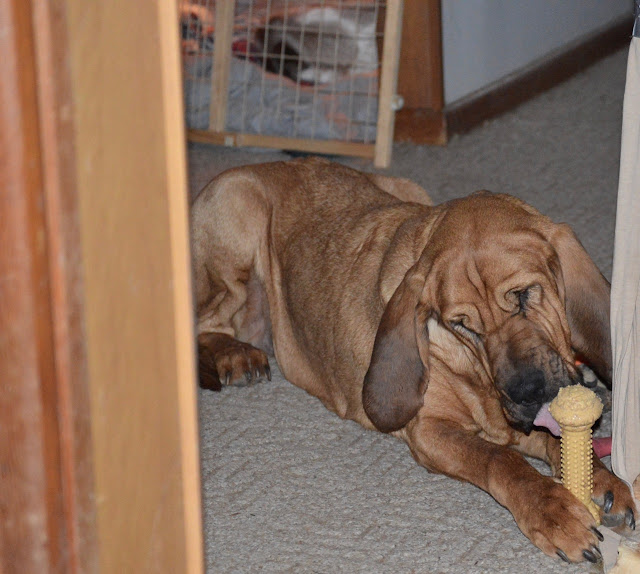 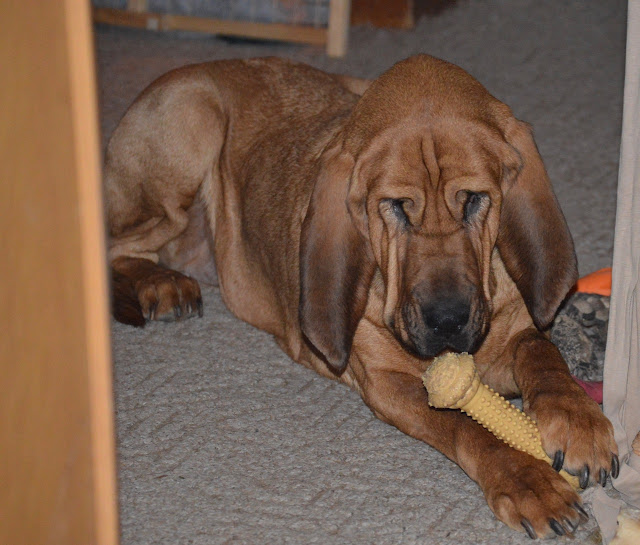 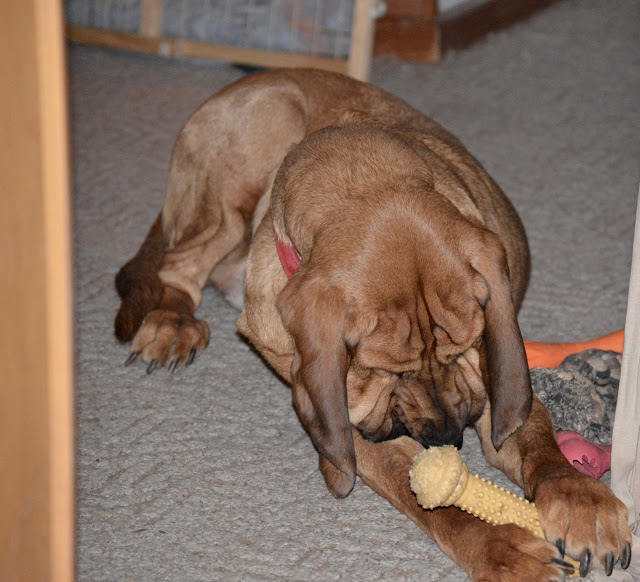 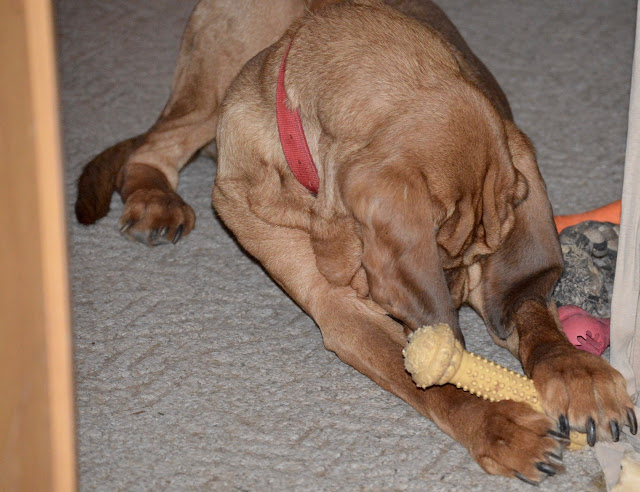 Not soon after I wrote that, both Sadie and Stella woke up and knew it was past time to eat lunch. Winston's appetite is still good. He wagged his tail as I followed lifting his hips off the ground ... only this time he searched long enough to do both of his jobs. Then it was back in his area for a nap.

All the hounds slept until 4:00pm ... right before the Clemson - Oklahoma football game I wanted to watch, he decided he needed to go out right before the kick off. When I came back inside I brought him straight to the couch and he has been sleeping every minute since.

Once again when outside this after noon - HE DROPPED HIS RIGHT REAR PAW IN THE CORRECT POSITION and then he almost tried to stand!!!

He does feel where he didn't before. I tried to shove up about 5" forward on the couch from his lower back by his tail, so I could have room enough to sit down. HE FLINCHED!

I am happy the way these past four days have gone. I don't know which is the cause for the improvement, probably a little of both, the Prednisone and the Laser Treatment but he has had a lot of improvement in small steps.

Heidi moved out to join all of us and kept the chair with her blue Mexican blanket. Stella and Winston shared the couch with me while Sadie was not happy being relegated back to the area where Winston sleeps. 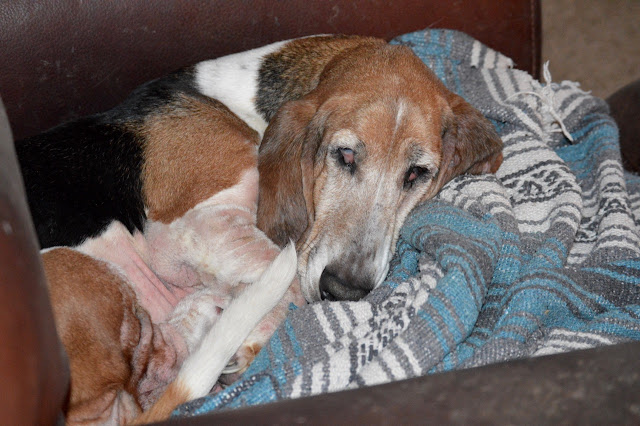 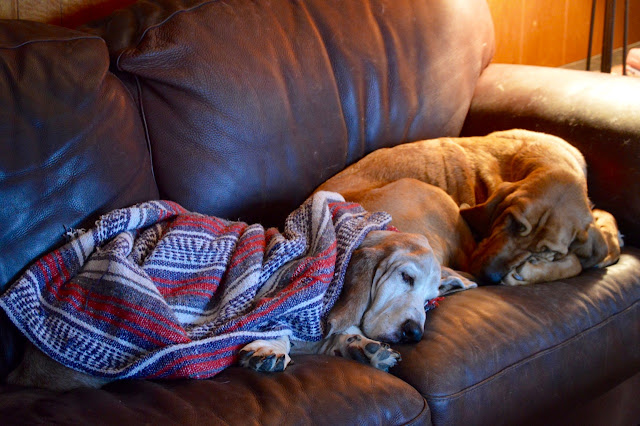 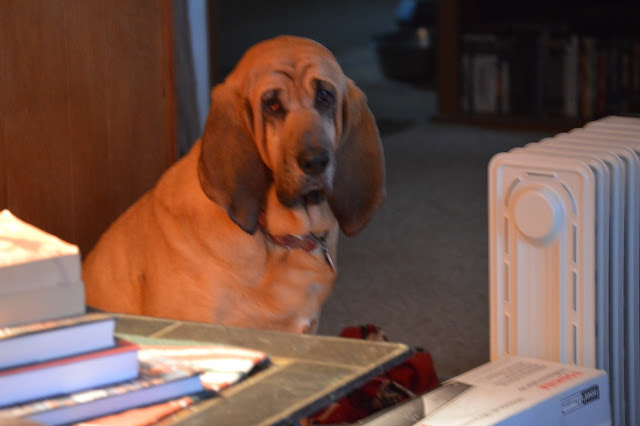 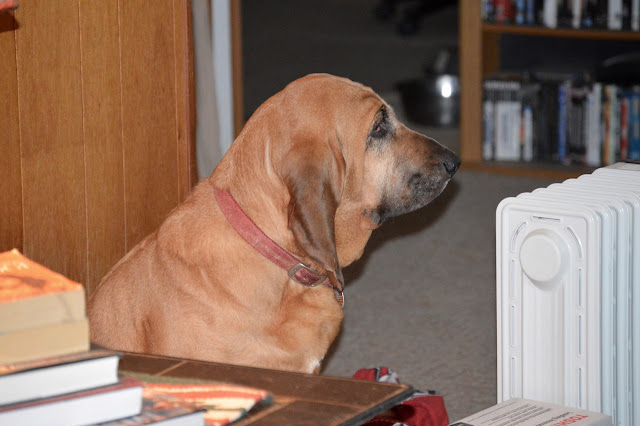