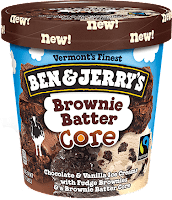 One of the advantages of being single, even at an older age, is you can eat anything you want anytime you want ... that is also a disadvantage ... today I paid for it.

I have no clue how it happened, but last night I ran out to get some coffee, salmon and sugar for the coffee. I came back with a lot more and some way THREE containers of Ben&Jerry's ice cream snuck into my cart.

One of those containers was something I had never tried nor saw before, it was one of their new "core" flavors. I knew from personal experience that their chocolate brownie mixture always put me into a coma after eating it. Maybe in this case that split with vanilla ice cream plus a liquid core of something would make a difference.

It did not make a difference ... same result ... same consequence.

I can't remember the time but somewhere around 3pm when the hounds came back inside and I had finished the whole container of the Brownie Batter Core I felt myself slowly slipping into a state of unconsciousness.

It was so sunny and nice outside but the ice cream had taken over.

The hounds and I slept through a beautiful day until around 5pm. Only pains of indigestion woke me up off and on during the unconscious state. I didn't like the indigestion but liked waking up  because I was having some of the strangest dreams I could ever imagine. Some people say your soul travels during dreaming ... if that is the case, holy shit!

Yet, I feel better now, with some Tums and an afternoon dog walk ... things feel kinda like normal again.

Earlier in the morning while writing the previous post I glanced out my window and saw a bird checking out my old thermometer in the carport. I know that has been mounted there for at least 30 years, maybe longer.

I recognized the bird from a couple of years ago and knew exactly what she was doing. She was checking to see if she could rebuild her nest on top of that thermometer. So she started around 10:47am. I took photos of her progress around my sleeping ... she is a hard one to catch because she would always fly away once she heard the camera focus.

This is the reason I don't like bird nests built in the carport. Besides the mess it makes on the wall and the floor on the carport, bird crap shows up on my steps, and/or on my cars. The nest building may come to a halt or the building site will be protested with sign carrying hounds. 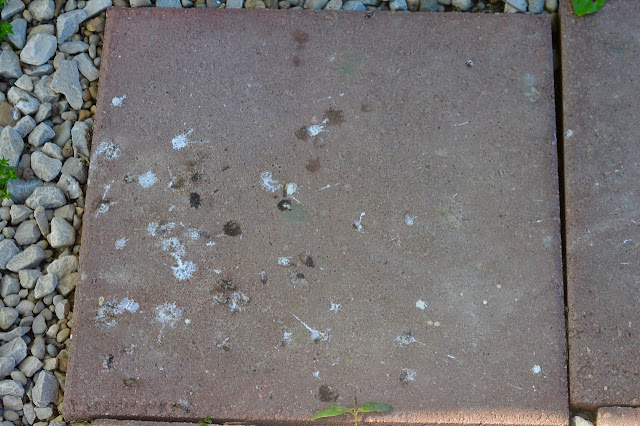 With the hounds well rested and I knowing what it feels like living the life of a hound ... I was rested too and wanted to go on a walk as bad as they did. Is their lifestyle taking over mine?

With a lot of rain and sun ... the field is not only growing but coming into bloom. 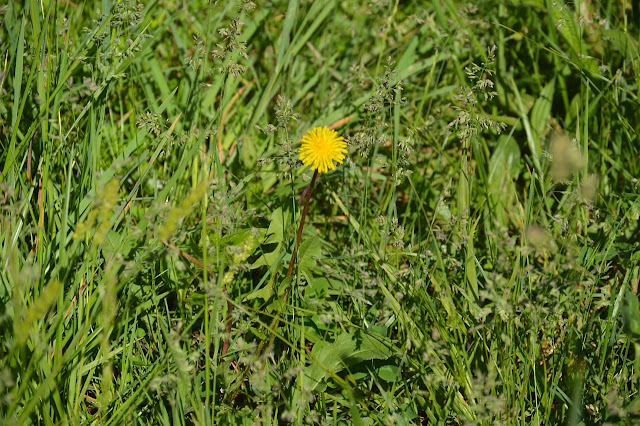 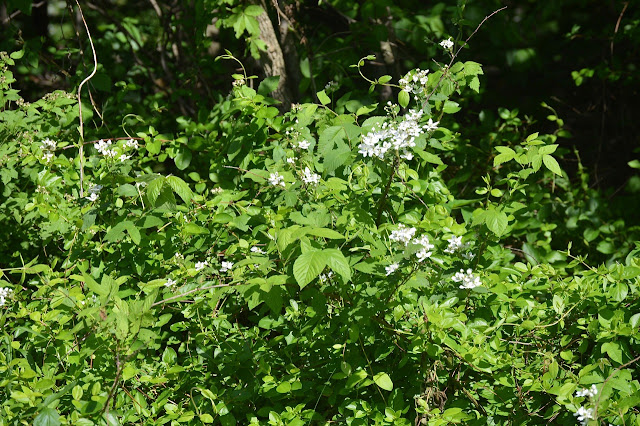 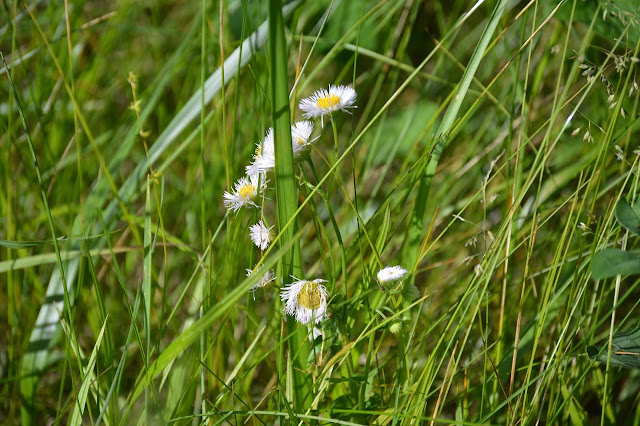 Today proved that the bloodhounds may have great noses but they may not be great trackers ... when this photo was taken of Stella, NOT TEN FEET AWAY ... the dark gray cat I saw months ago around 1am one night, scurried through the field into the wooded area.

The hounds were close to her but didn't see her ... neither one. 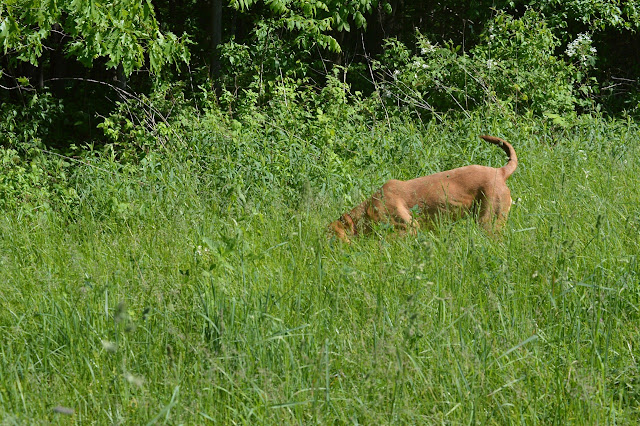 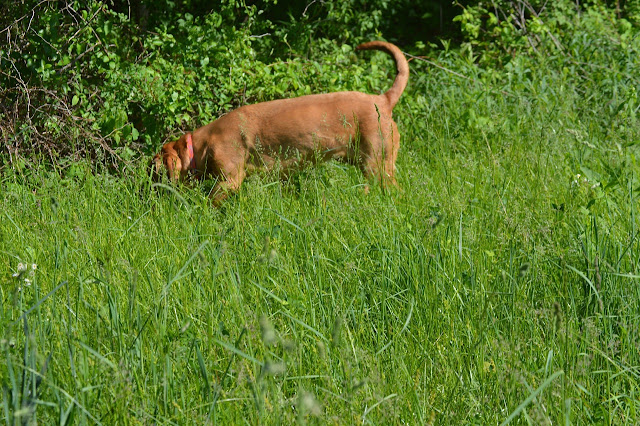 By this time Stella is hopping and running around all over the place and highly excited ... but she is late ... and my camera isn't working as fast as she is moving. 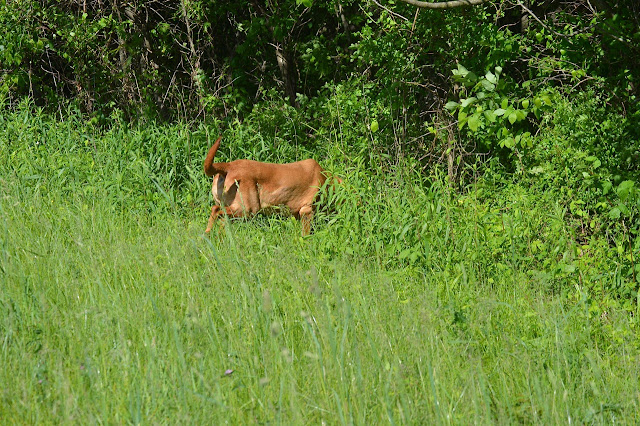 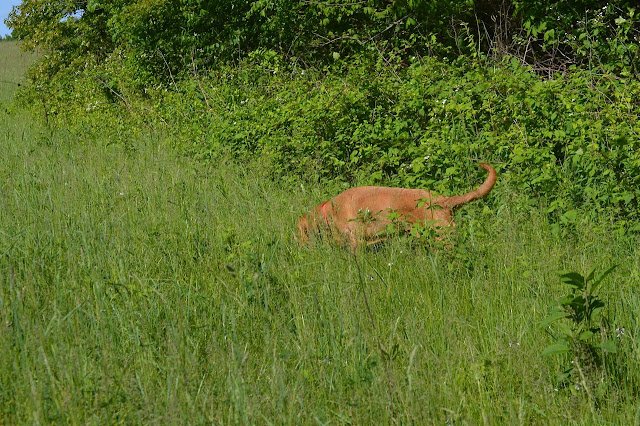 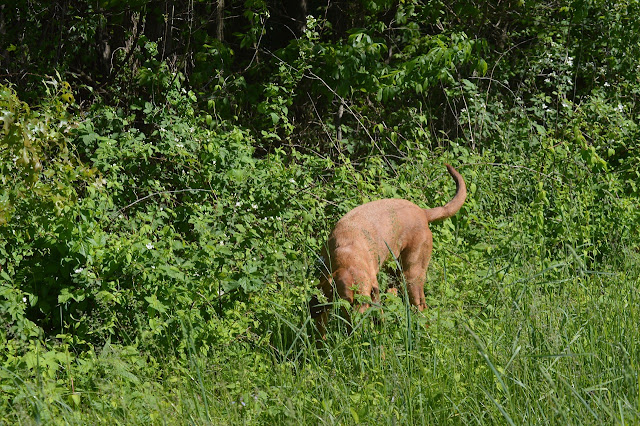 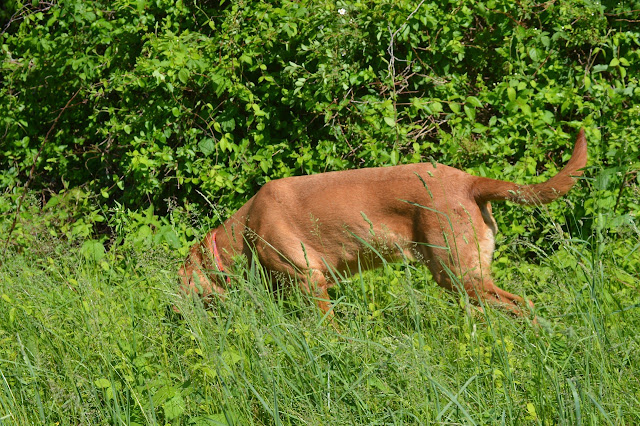 She figures maybe the cat ran over where the deer are and took off in that direction. I can tell it's going to be one of those days she will ignore everyone and everything until she can find that cat or what's at the end of that scent. 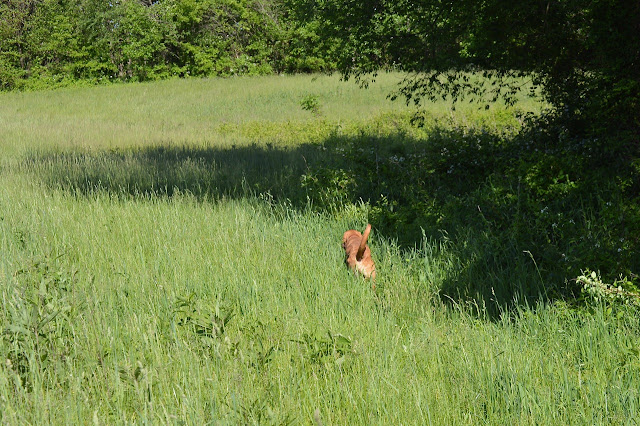 Sadie's help didn't come up with any different result. 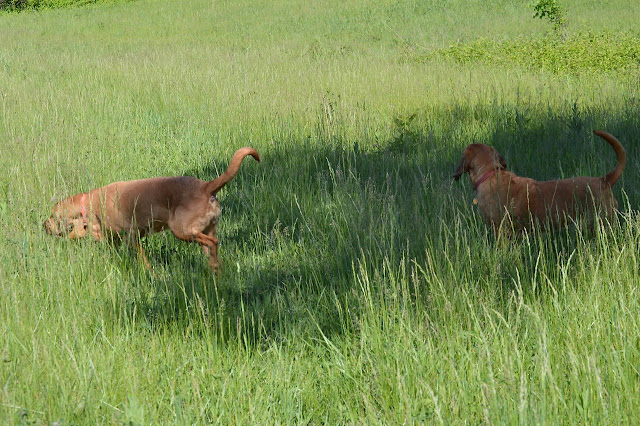 With Stella unconscious I continue to walk and let her do whatever she wants. When I finally glance back I can't see her and guess she has ran into the gully or the wooded area. Both areas are outside of her boundaries. 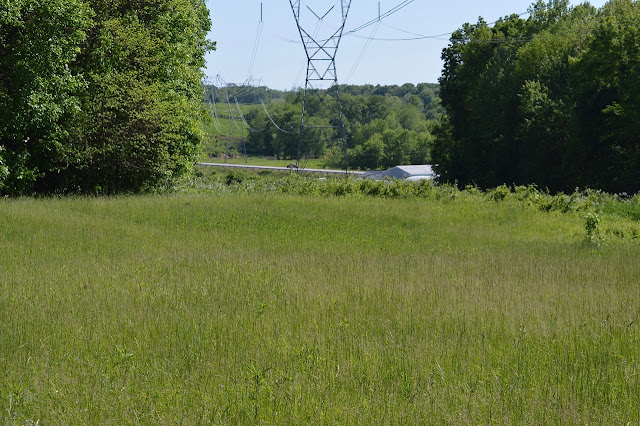 As I take this next photo trying to fit a panoramic shot of an empty field ... there is Stella with her head down and her tail up. I thought she was running back to me and Sadie but midstream she takes off in another direction .. her nose is driving her crazy today and it all started with cat she didn't see. 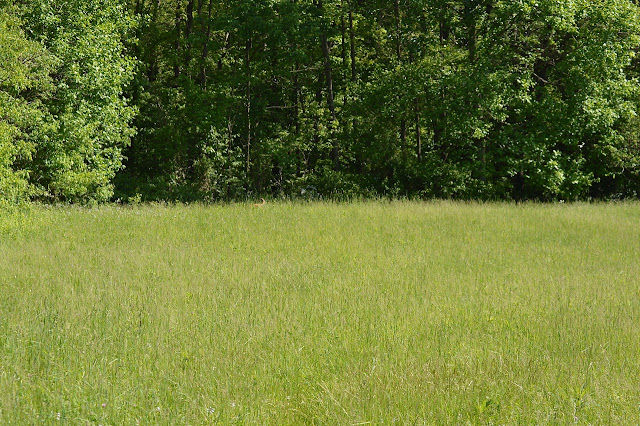 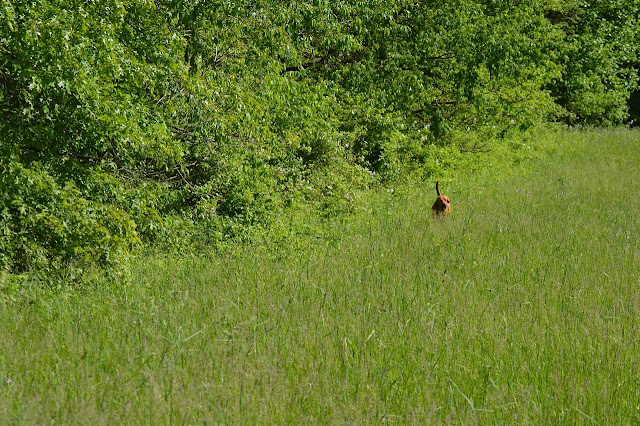 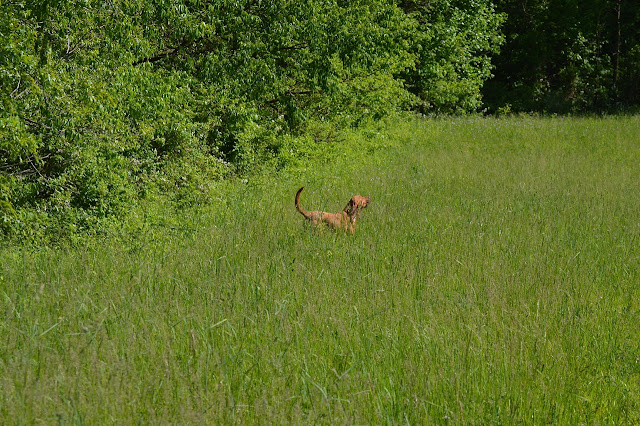 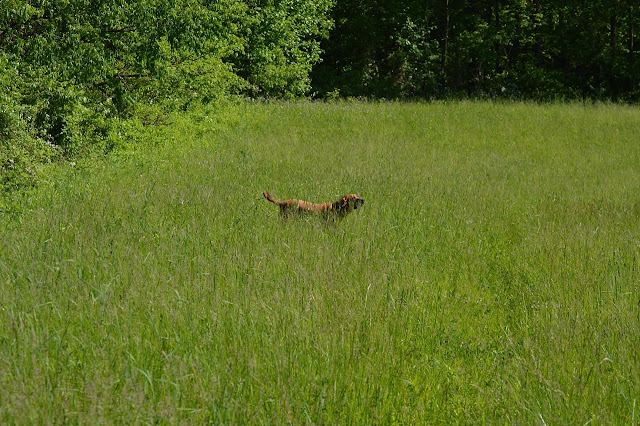 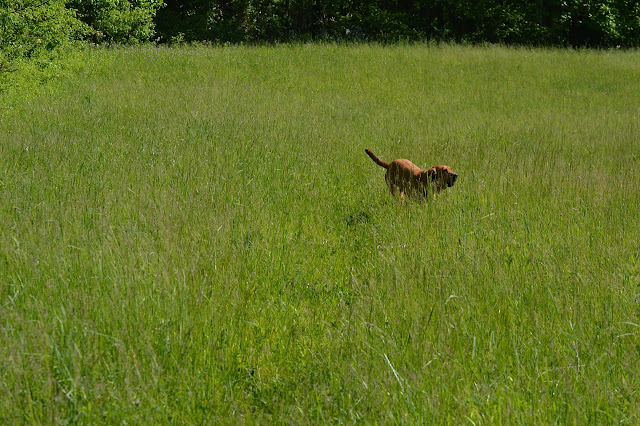 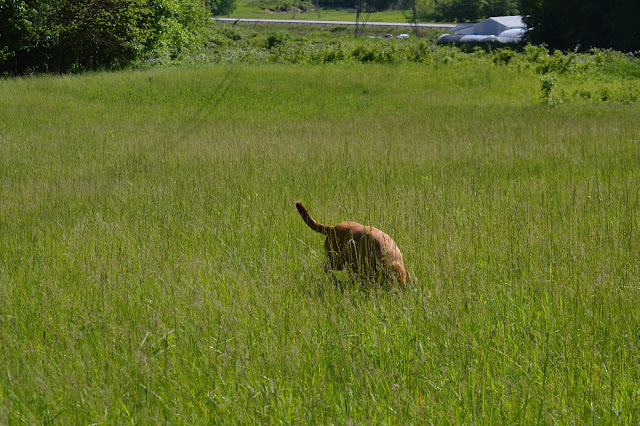 Most of the walk Sadie stayed right next to me but would occasionally help Stella in her hunt ... they still came up with nothing. 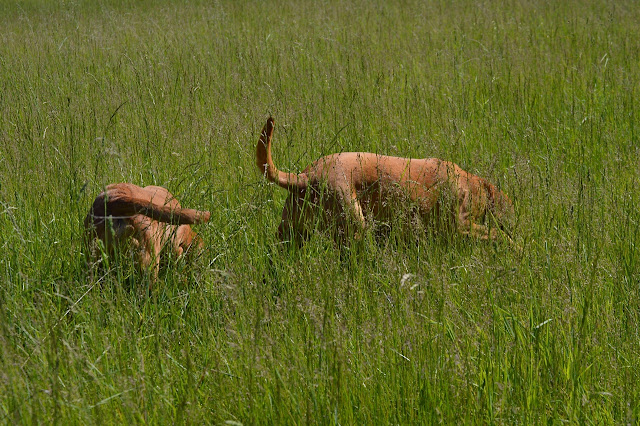 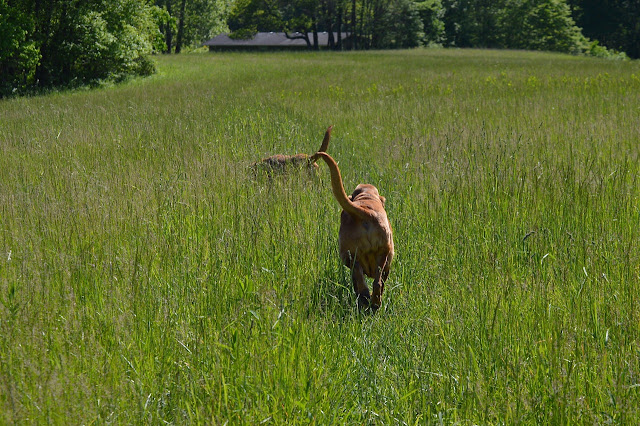 On the way back Stella takes off again in a direction different than the normal path and sprints back to the "scene of the crime" ... that cat has to be there somewhere. She is determined to find it. 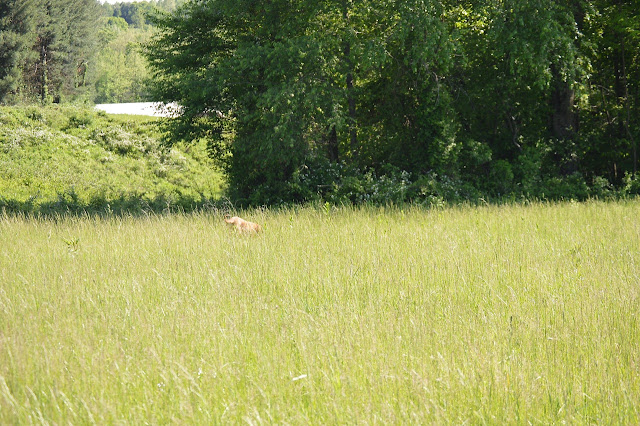 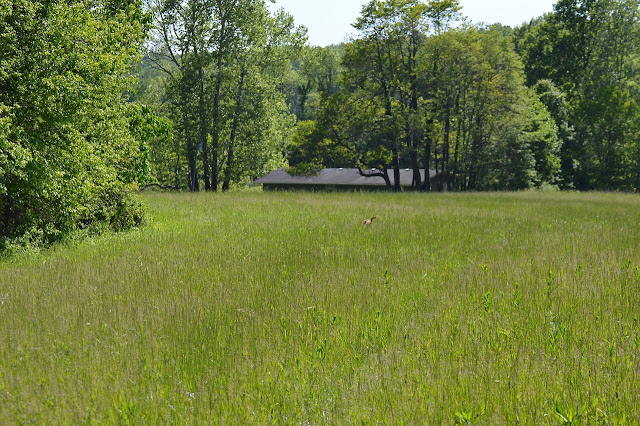 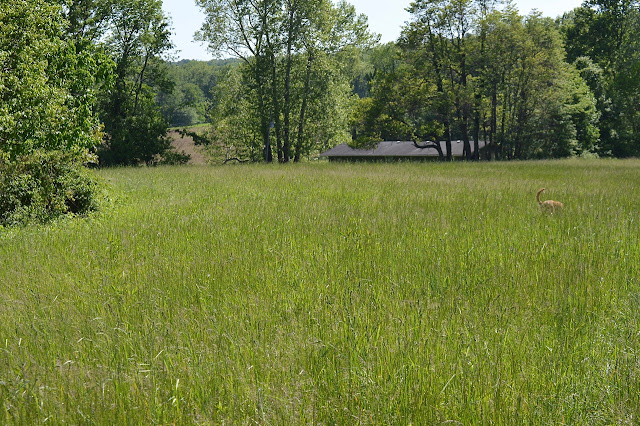 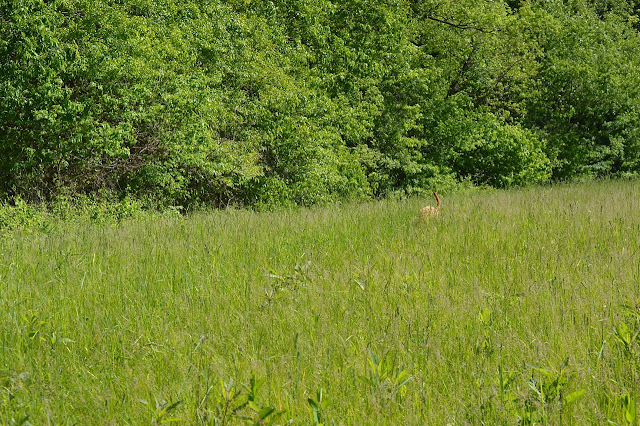 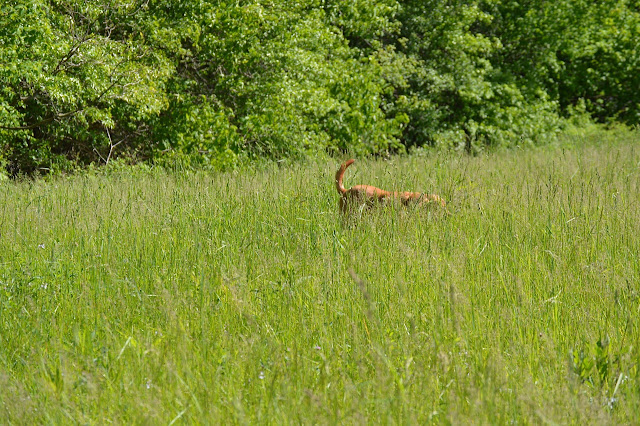 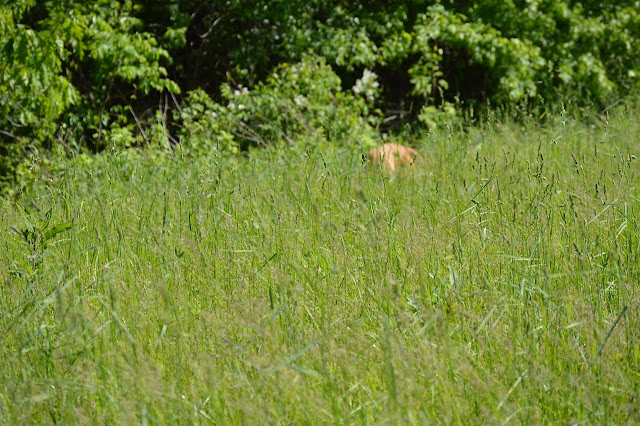 Finally Sadie convinces her to stop the search and head back to the house. It's hot, the gnats are bad and Sadie would rather drink some fresh filtered water she knows is back at the house. 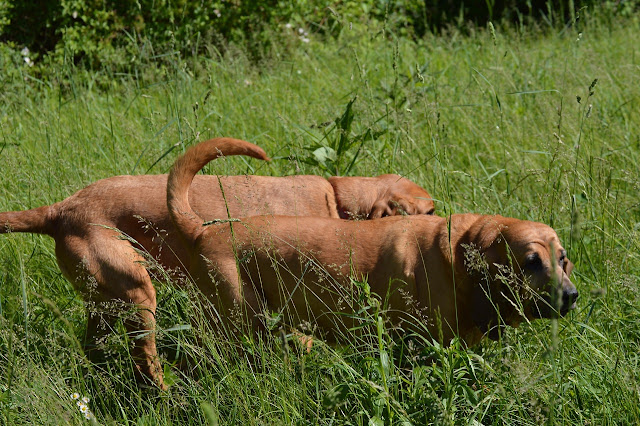 Once we were back inside, as usual, Sadie chugged the water and both of them have been sound to sleep while I put this post together. The life of a bloodhound ...

Now, what are we going to do about that nest??

Weather is great here in 'the tropics' of Southern Indiana.