What A Strange Trip

From the title of the this post you have come here expecting to read about a possible day trip the hounds and I took yesterday ... since we didn't blog. I wish that were the case but it's not.
My mind took off on it's own trip yesterday ... a very strange one, I was just along for the ride. It happens sometimes out of nowhere. There might be some readers here that understand what I'm saying.
It was a wasted day actually and one that I will not say anymore about. I did catch this sunset though while sitting at my kitchen table last night. 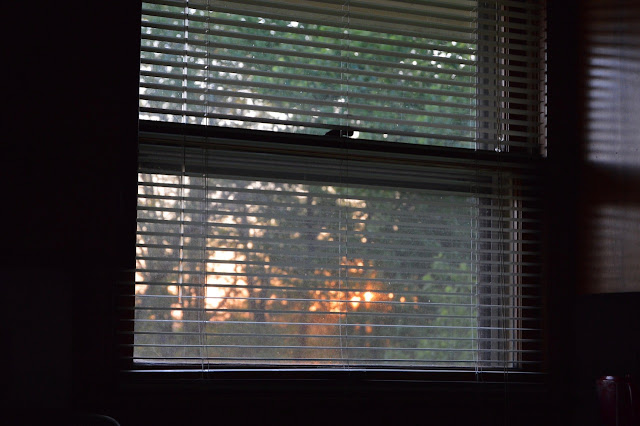 This is the view I have when I am at the kitchen table either eating or on my laptop computer. This was taken just after snapping the sunshine setting in the window, a little after 8pm. I knew then that Friday would be a better day. 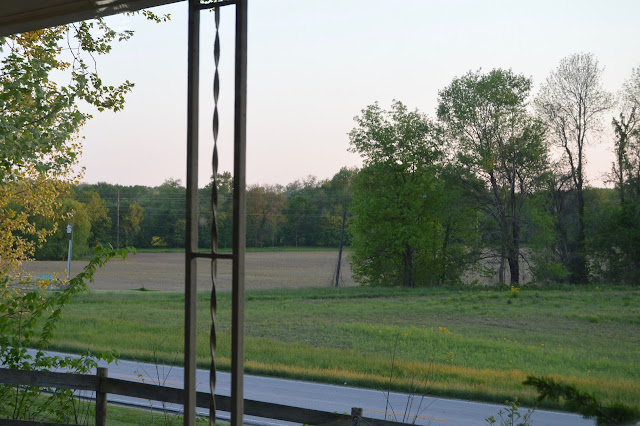 Although Sadie, Stella and I were having a snack of sliced baked turkey at 1:30am, we ended up having a great night of sleep and waking up about an hour earlier this morning than we usually do. Of course that meant the field would be wetter with morning dew and the lighting would be different for the daily morning photos. 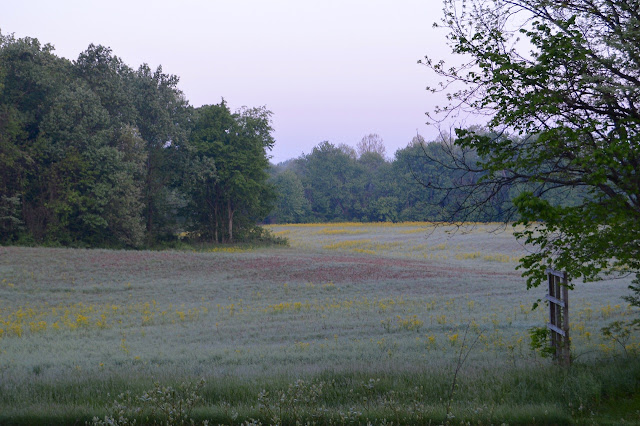 It was just a couple of minutes past 7am but Sadie didn't hesitate in going out into the wet field, while Stella did her normal thought process on whether to or not. She decided to take the path of least resistance and walk into the field along the edge where grass/weeds were shorter. 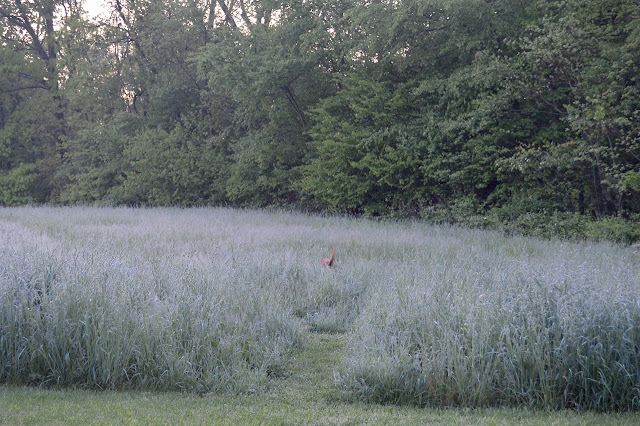 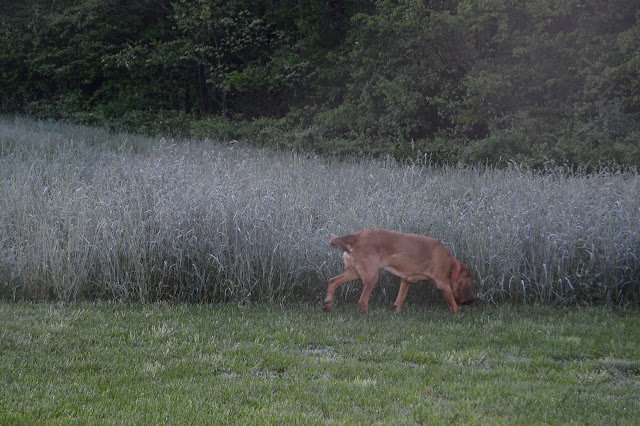 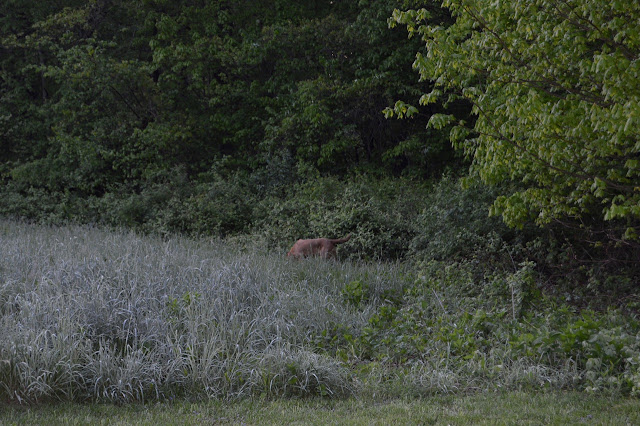 They didn't stay out long and as the norm, they went back to sleep for an hour or so while I drank coffee and did my daily morning reading on the internet.

By 8:30am, I could tell the day was going to be a great one. I need to get up on the roof today to clear some of my gutter before the next storms on Tuesday. The tornado site I follow on Twitter tells me next Tuesday could be interesting in this part of the state. 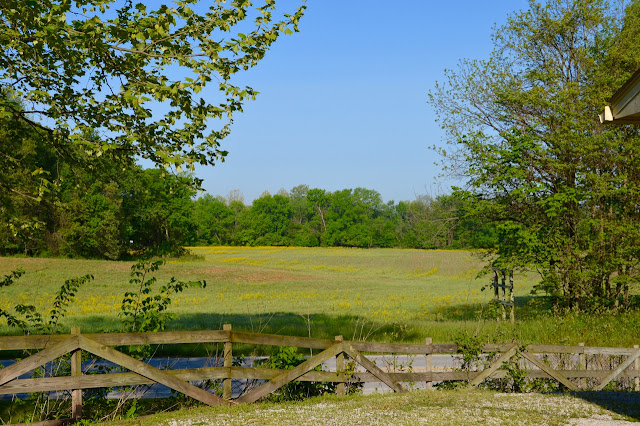 I could tell by the way the hounds moved, they were not ready to start their day. They didn't beg to take the first walk of the day. They didn't play, didn't explore. Right after the last photo, they led me back to go inside, I didn't say a word. They have been sleeping every since. 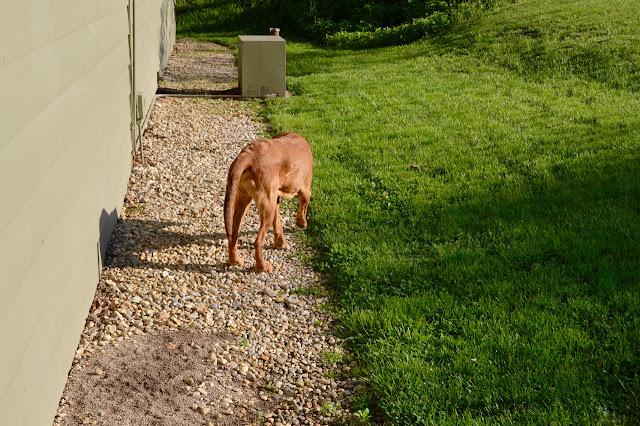 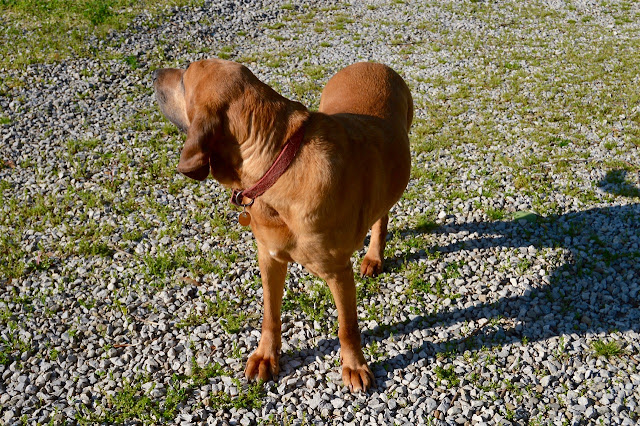 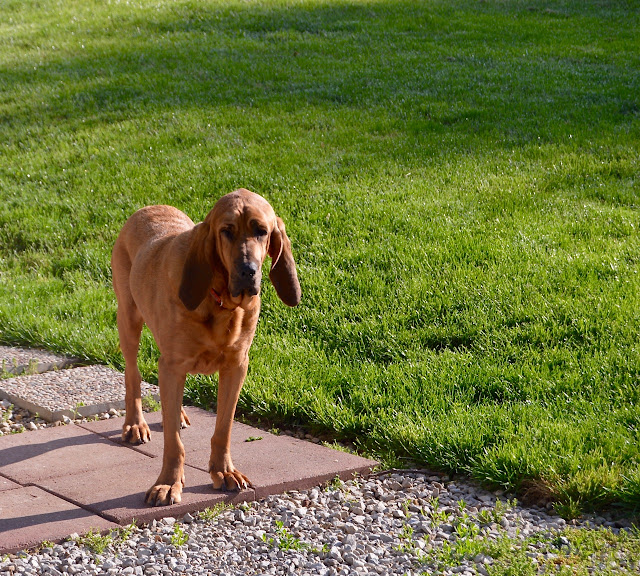 Not sure what today will bring but I know I feel a lot better today. My coffee is gone and I want more. Heidi is still sleeping on the bed where the sunshine comes through the window on the east side of the house.

Speaking of Heidi ... as usual her skin looks great first thing in the morning. Her appetite is big enough to eat a bear. The ointment is applied multiple times per day. Late last night I started reading about different recipes for cooking her meals and getting away from kibble.

Some said it would take up to 3 months before I might see any improvement. Since she had a strong yeast odor last night I saw a website that talked about a specific diet for that ... it also used and had links to the Dinovite supplement we tried in 2014.

What makes me hesitate to break away from my latest plan that was started weeks ago ... it says it would take 16 weeks for the dog food to get out of her system and for the current Earthborn no grain kibble to show improvement. It would take maybe that long to see any improvement from the Wounded Warrior Ointment. Others said it would take 7-14 days.

Since I do see signs of improvement AT TIMES, I'll stick with that plan.

A reader linked this article to her comment the other day ... it was great explaining what we have been going through. It was nice to read that what I have been feeling in trying to find a solution for Heidi over the past 20 months is normal in this situation. It was also sad to read there might never be a solution.

In more than a few websites I read last night about yeast infections in dogs ... they said her skin getting worse before it got better was part of the process of getting rid of the infection. So I will stay with the no grain kibble, no potatoes, wounded warrior ointment and see how it plays out.

It's going to be a nice day here in 'the tropics' of Southern Indiana.