Two New Posts Back To Back

It's out of the norm but I am posting two new posts back to back due to each of them having a different subject. The first one is below this post or over to the right sidebar it's titled "Took A Mid-Day Drive".
Right after the FJ was parked and the driver's door opened, as I climbed out Heidi was right behind me and moved as fast as she could into the following position. I guess she didn't have enough room in the passenger seat to do that and may have been holding that scratch for quite a while. 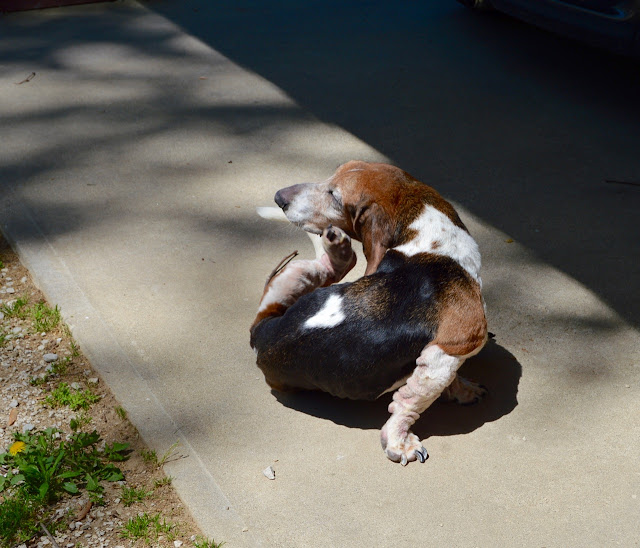 I could tell by the temperature while letting all the hounds out of the FJ after our return, that the field might be dry enough to get a walk in before I started my afternoon sports marathon on tv. It was dry enough and off we went. Heidi stayed back inside to let the ointment do it's thing without taking the chance of getting it wet. 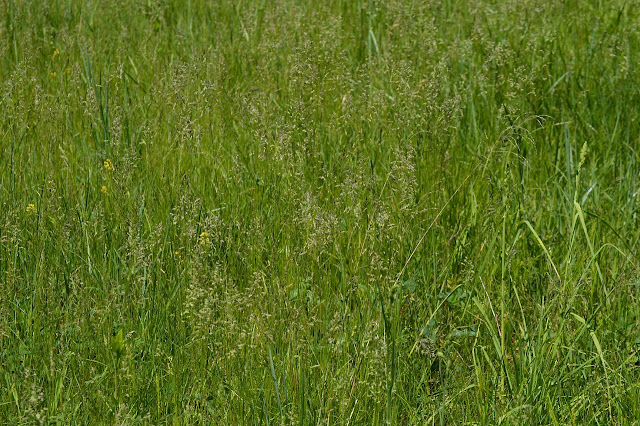 I believe the hay in the field is growing by the hour and pretty soon once the bloodhounds are off the path about the only way to see them will be their tails. When it got too high in the past, Winston use to boycott the walks and would stay back in the yard howling and barking as we walked away. 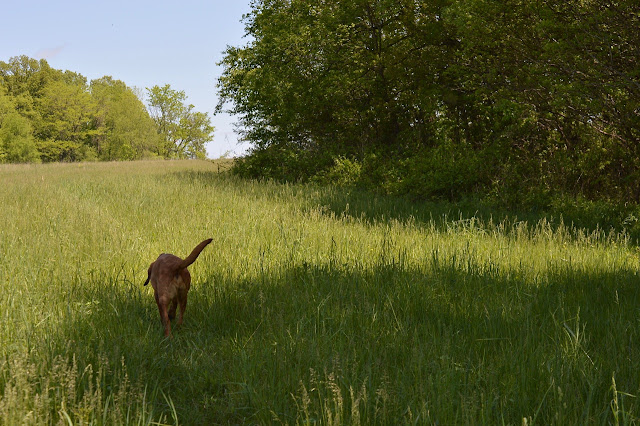 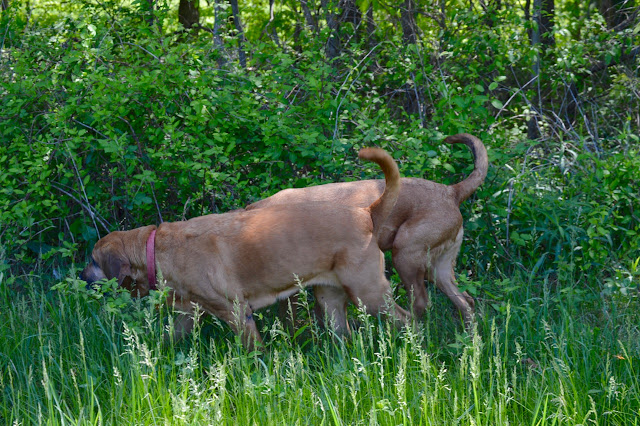 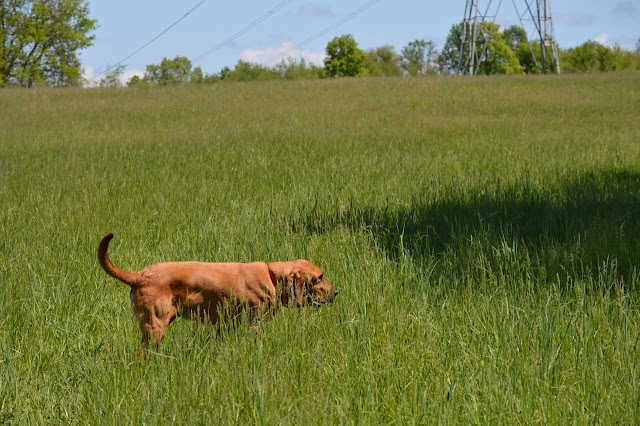 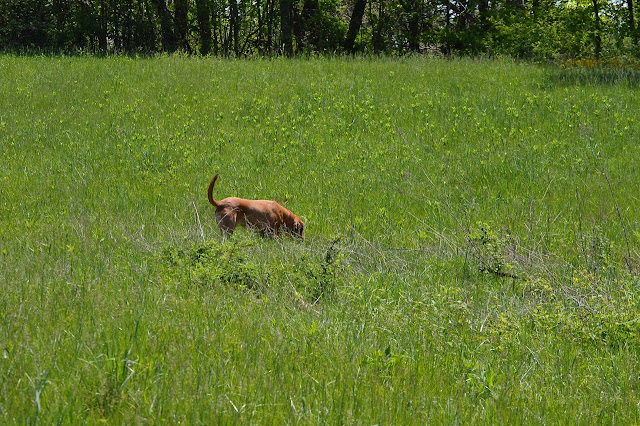 I glanced back at Stella and at first she was nowhere to be seen and had stepped into the wooded area ... that's out of bounds for her. When she heard her name she came out of the wooded area to walk along the edge like nothing had happened. 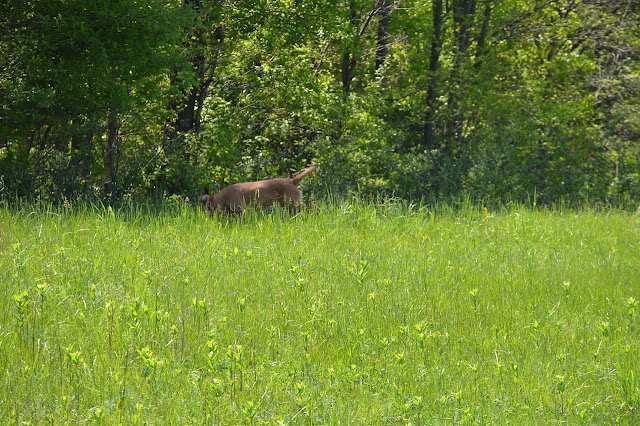 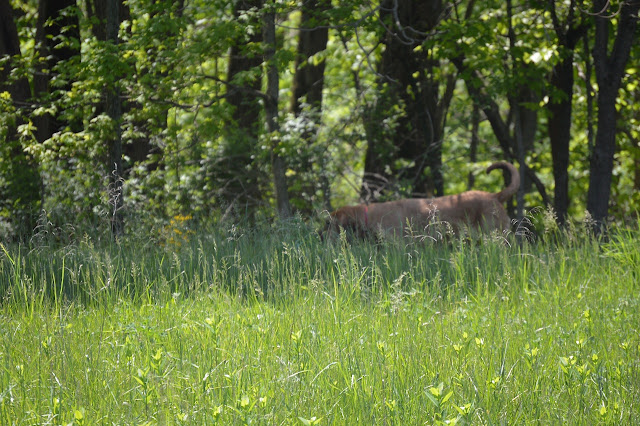 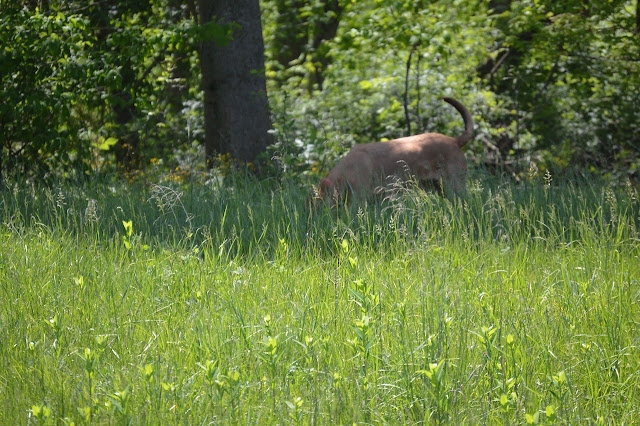 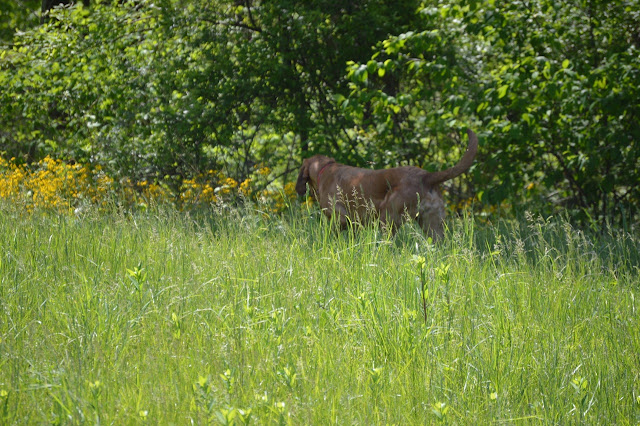 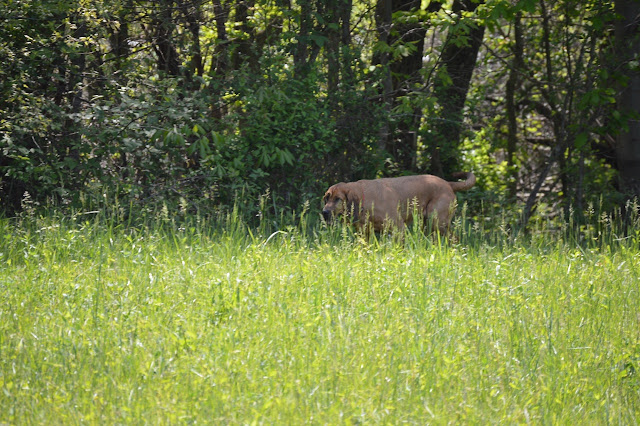 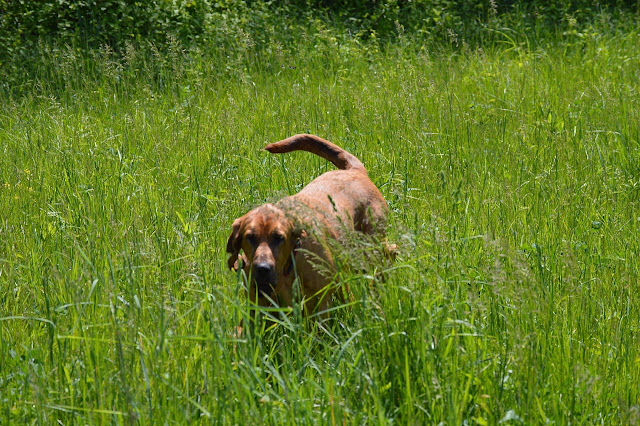 I'm glad to see some ribs on Sadie, that means her exercise 2x per day and portion control on the dog food is working. She still has a few pounds to lose. 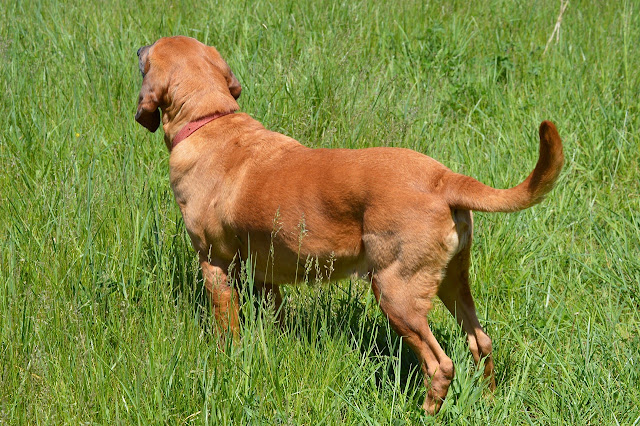 What ever it was that caught their interest, Sadie took off trotting and immediately rolled in it. It worked out ok, it was nothing that needed to be wiped or washed off. With my upcoming televised sports this afternoon I did not have time to give a bloodhound a bath ... especially since I would have never gotten her in the tub. She hates baths worse than getting her nails cut. 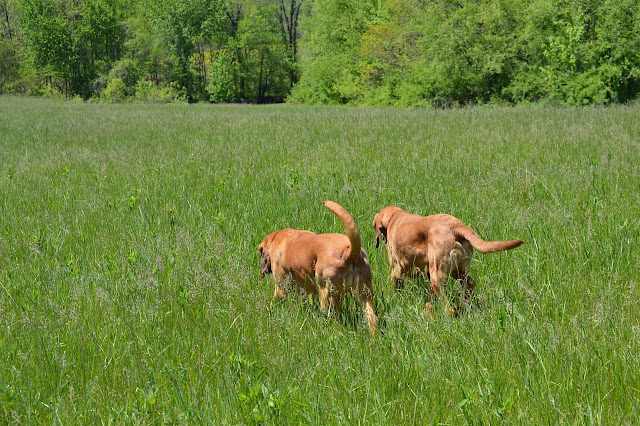 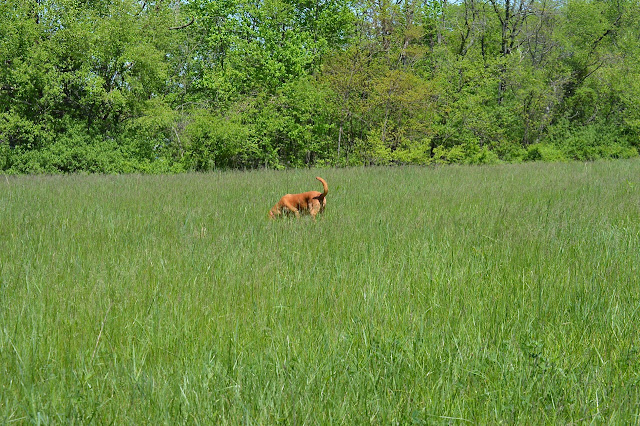 She also acted like nothing was wrong when I called her ... everything was okay to her. 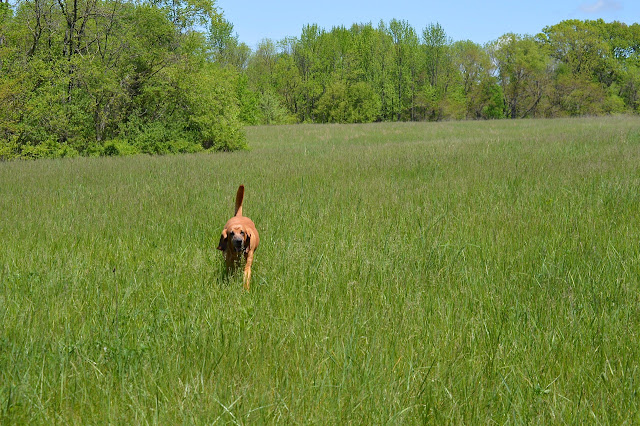 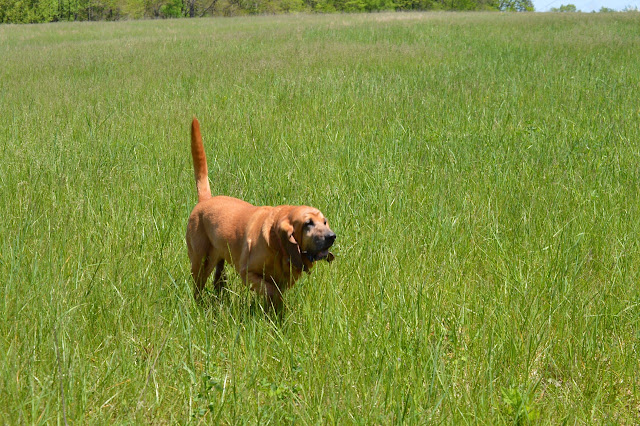 With it getting fairly warm, Sadie trotted for the house and headed straight to the water bowl. 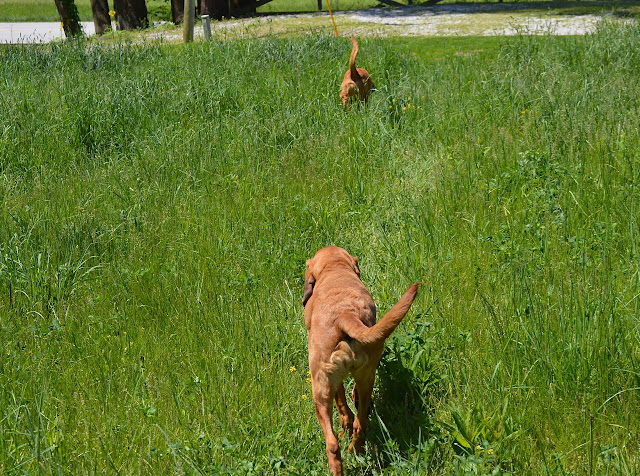 In the meantime my afternoon ended with the Reds game tied in the bottom of the 9th while the NASCAR race had 11 laps to go, NHL playoff game was on NBC and the Formula 1 race had just started on NBCSN. I ended up taping the F1 race. I need a 2nd tv.

While it looked like the perfect day in weather, we had a severe thunderstorm blow through but passed just to the south of us. It was the only small storm on radar in the whole Midwest ... it ended up raining lightly here with the sun shining while Stella whined ... because there was thunder. 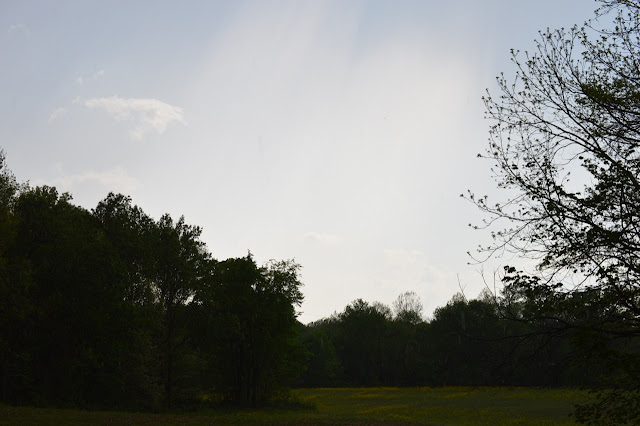 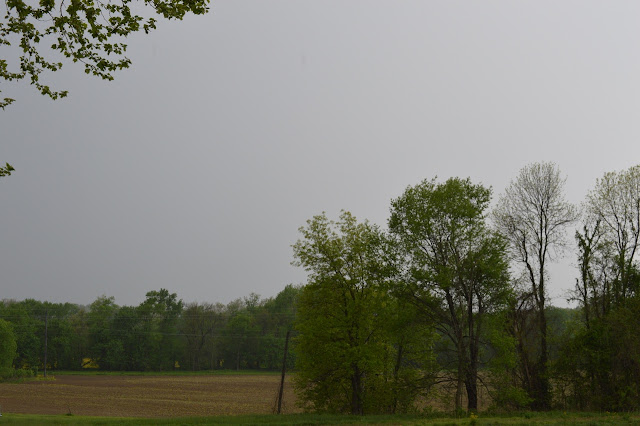 Sunsets are nice here in 'the tropics' of Southern Indiana. 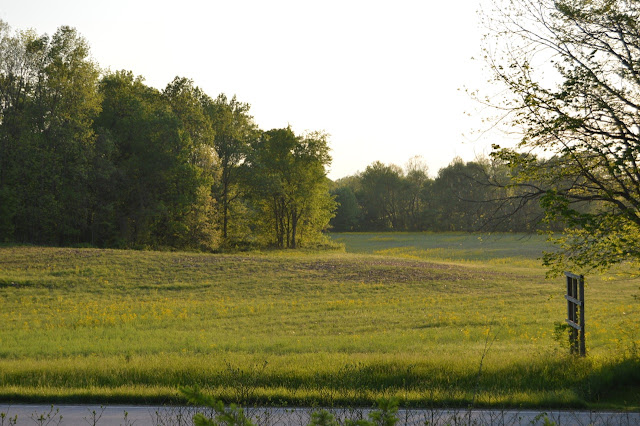 at May 01, 2016
Email ThisBlogThis!Share to TwitterShare to FacebookShare to Pinterest
Labels: Spring Rains, Stella's Thunder Fear, The Daily Dog Walk