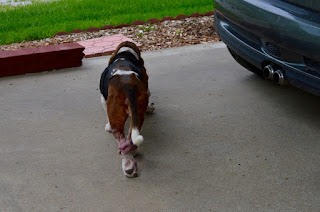 To say the hounds were affected by the weather today would be an understatement. They were out of it basically.

Heidi came outside just once and just long enough to relieve herself ... then scrambled quickly back to the door to be let in.

Stella and Sadie went outside a couple of times and only by my invitation. Sadie did nothing but stare at Stella. Stella did nothing but wander and deciding the field was too tall and too wet that she walked out of the field within two steps. 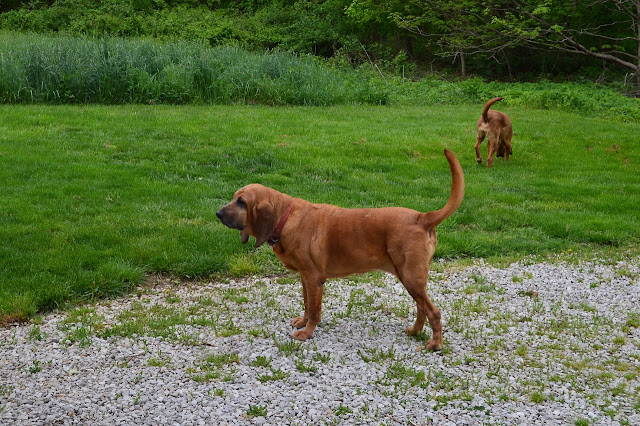 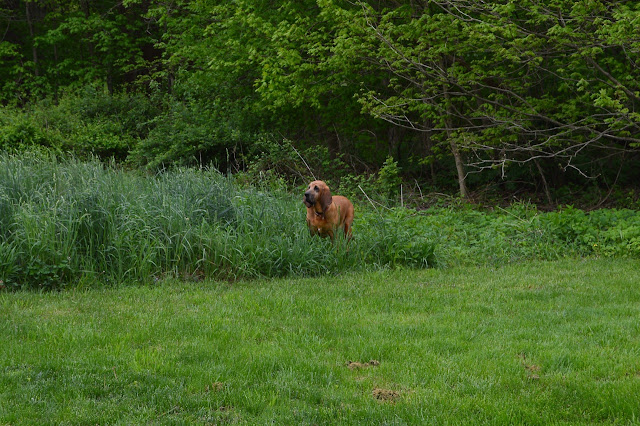 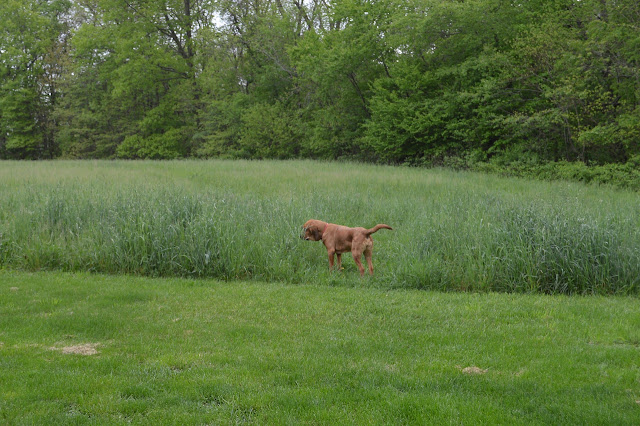 One thing about a day like this, cool temps and overcast skies ... it leads me to a lot of reading. I mean hours and hours of reading. It might be books or it might be on the internet. Today it was mostly internet searching about questions I had, finding a lot of information about those questions and then reading too many websites.

I spoke a few weeks ago about cutting the lawn. In other locations and in other houses I lived in, my yard was flat, green and nice ... I could cut it low and it would look like a golf fairway. Another house was tucked back in the pine trees so deep that my yard was nothing more than the forest floor of pine needles and never needed mowing.

I would like to cut this yard low and I have tried in past years as well as just last Thursday ... part of it anyway. Do I cut it high or low? I cut the back low (2") but when I made the first lap across the top of the front yard I stopped and raised my mower blade a notch to 3" and cut the front that tall. Here is a photo showing the difference today, 4 days after I cut it. Or did I mow it Friday? See what I mean about retirement? 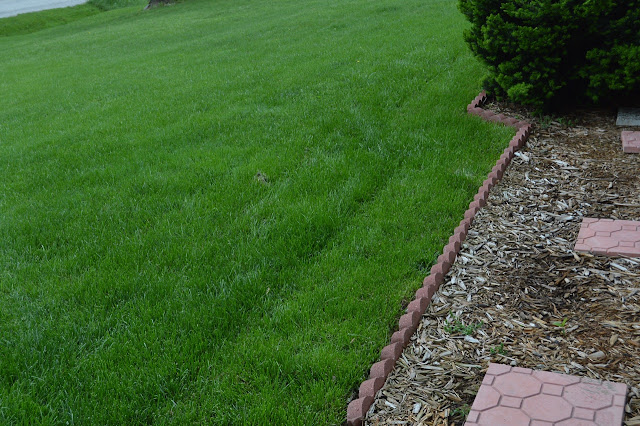 After searching for my answer, Scott's Lawn care says I should cut my yard between 2-1/2" - 3". Since my mower can only do 2" or 3", then the taller grass is correct. That will keep it green during the hot July summers but longer than I like to walk through. It will keep the weeds out though.

Another blogger I follow that not only ticks me off but 1,000's of other readers with his attitude towards dogs, people, other pet owners, facebook readers, his blog readers ... was talking about a 35mm lens he wanted to buy that was going to cost him $2,000. Instead of setting up a 'gofundme' account where people could donate money toward the purchase of his lens ... he decided "this time" to come up with the $2,000 himself by trading in 4 of his lenses.

He must have finally felt guilty from his last request of his blog readers, although he would never ever admit feeling that way ... this lens is to go with his brand new Cannon that shoots monochrome black and white photos ... nothing else. Based on recommendations from other photographers he settled on on that cost $3,000 instead of $15,000. He is a blogger, not a professional photographer.

He didn't have the $3,000 to buy the camera so it worked before on his previous camera that he just had to have, that he set up a 'gofundme' account and let his blog readers donate the money for him.

Evidently he raised a lot more than $3,000, which he can legally keep ... because he now has enough money to have his old farm house scrapped and sanded, repair the wooden slats if needed and then paint the whole thing. I can't think of any other way he could afford a house painter in today's costs since he just declared bankruptcy this past fall/winter.

Personally I don't think it's right to raise money for causes like that. So I sent him an email that surprised me that he not only read my email but replied.

I explained to him that I was not an author like he is, I've never written a book or books nor am I a professional photographer like he thinks he is. I AM like him in that I spend time blogging every day, taking hundred's of photos and then the time it takes to edit them. I also put my photos on the blog for readers to uses as they see fit ... just like he does. So I asked him:

"So does that mean I can also ask my readers to pay me for my work and sign up to pay me a subscription to read my blog and also donate money so I can buy a better camera because of the time I spend blogging with photos?" ... like he says "be paid for my work".

He didn't say hardly anything in his reply except that decision would be up to me.

LOL ... don't worry, I will never ask readers of my blog to donate money for anything. About once a month when he wants to raise the number of subscriptions he will repeat his old story of how publishing has changed, how much time he spends blogging and posting photos, the blog will remain free to those that don't wish to donate but he should be paid for his time .... guilting many into donating anywhere from $5 on up on a monthly basis. His blog claims to get a million views per month.

You do get my point though don't you?

So today I was reading his blog about his new $2,000 35mm lens or was it $3,000 ... anyway he traded in 4 of his lenses to get it. They told him the lens was great for portraits, landscapes and scenes. So here are a few that I shot today at the 35mm setting on my basic beginner Nikon D3200 camera and the stock 18mm-55mm lens. 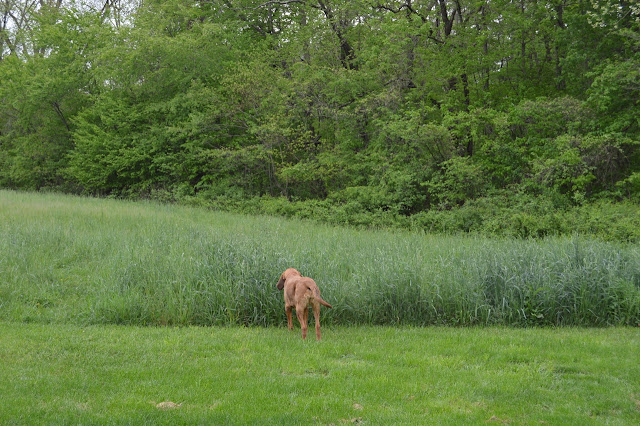 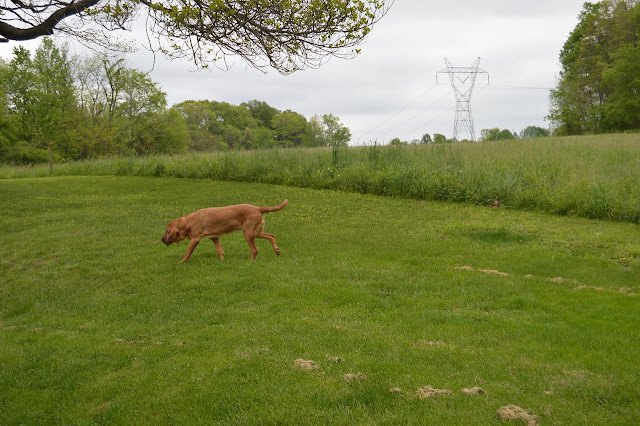 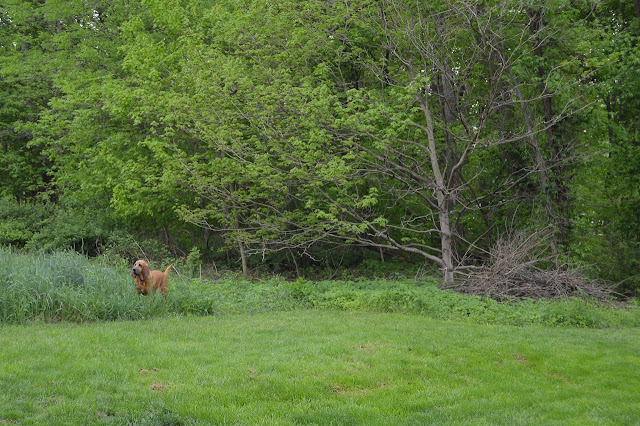 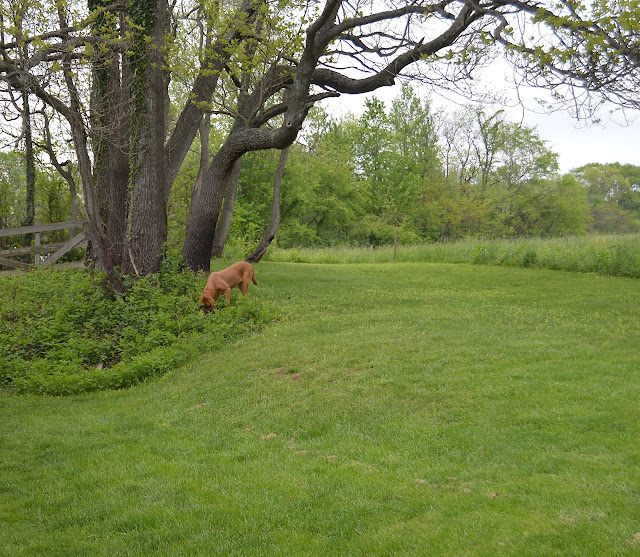 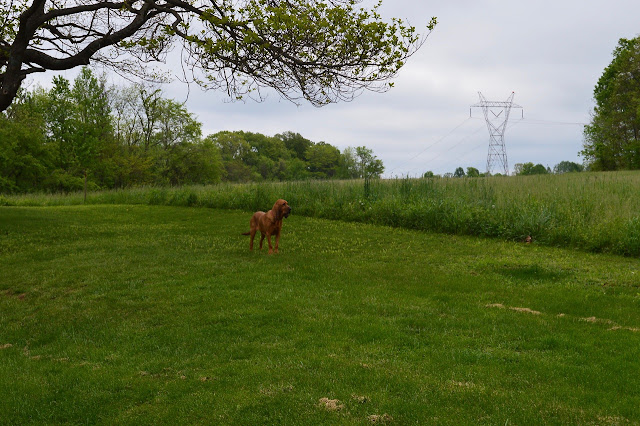 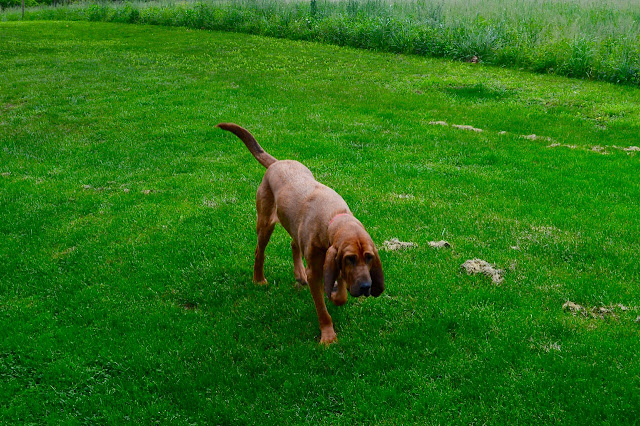 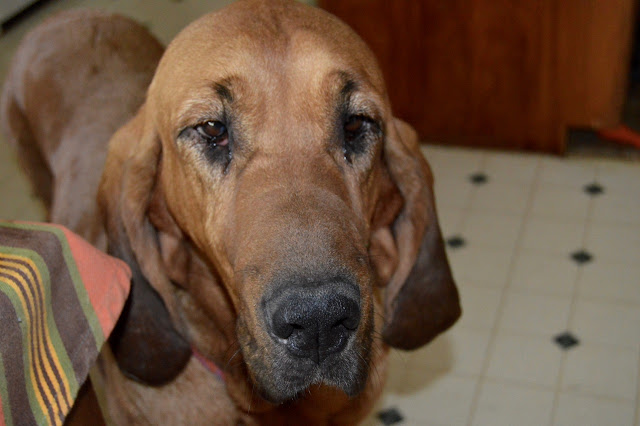 The photos of the cut grass and Sadie above were shot with the lens set at 55mm.
While I was playing around with that, I got a shot of Heidi's rear hock on her back leg as she was walking in the house but at 55mm. That had me once again going back through her photos in the folder "Heidi's Skin" ... all dated so I can compare. Over 18 months worth of these "skin" photos, it ebbs and flows like that tide ... from good to bad, stable but not normal ... just messed up skin.
So here are three photos for you to compare just by looking at the photo. I don't want you to click on the photo to see the file names because they are all numbered in sequence by the camera  ... just look at the photos and tell me which one is the best looking skin or is there any difference at all. One, Two or Three.
These 3 cover 33 days and some with the new ointment and some without.
#1 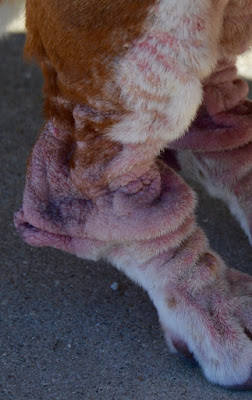 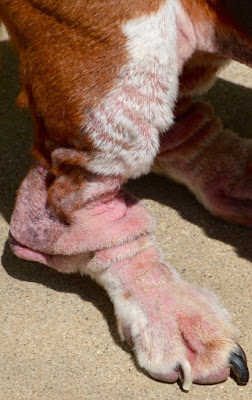 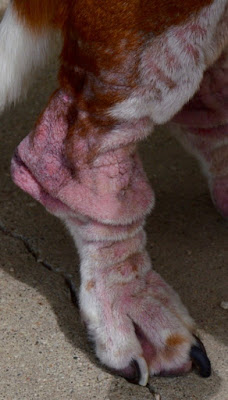 I think these photos show why sometimes you can hear in the background of me beating my head against the wall ... LOL
Getting back to the cleared area from the photo's on this morning's photos ... there was another reason that was overgrown for the longest time. Not an excuse but a reason why it got that way in the first place ....
Property Lines

See the pole a little to the right of center in the photo? Now see the fence on the left?  Well that left to right property boundary is different on two different surveys'.
So almost all of the brush that was not mowed I was told belonged to owner of the field. Based on the survey that came with with my paperwork when I bought the house in 1997, my property only goes not even to the fence and not all the way back to that pole.
A few years ago the new owner of the field and neighbor had the field surveyed during the purchasing process. I came home from work one day and had wood stakes with bright orange flags pressing up against the side of my house on this fence side in the photos and then on the opposite side, they were right up against my old Chevy truck that I use to park by the utility pole. I couldn't open the door to the truck to move it.
I was pretty sure that something was wrong but didn't say anything. They also had driven in steel stakes with those orange flags in my front yard on the north side or left side facing the house.
A couple of day's later the stakes are moved away from my truck and a corner property pole is located on top of the bank and off to the right of my stick/limb burn pile. They moved the stakes out of my front yard and off the side of my house and made the corner property pole where you see it, right of center.
Based on my survey ... it's still wrong. Luckily the new owner doesn't make a big deal out of it.
The old neighbor but younger in age, that owned the house on bank side of the driveway almost caused a 'civil war' over a stupid property line. After I showed him a copy of my survey and pointed the line out to him ... he let me know "in this county I can pay $500 and they will make this property line anything I want .. including your driveway"
Nice eh? He was very very lucky that I have a good ability of recognizing stupidity when I see it or even hear it.  :)
That is the same guy that I am told got into an argument that almost came to a fist fight with the guys surveying the field property, OVER the corner stake they put in on top of the bank along his property line.
Back in the 1940's before they dug it up, there was a railroad that came from across the highway where that wooden frame for a sign is in my daily morning photo. That railroad ran along the base of the bank on the other side of my fence. My survey paperwork and two previous owners of my house say, my property line runs to the base of the bank.
Or if you want to be specific, I took a tape measure with me one day while reading the survey and found it to be 13.5' past the fence. Two owners ago, the lady that had the fence installed told me and the stupid neighbor the fence was put in at the top of the bank because the land was always wet at the base of the bank ... to this day there is standing water in some places.
So the fence builder recommended to install the fence at the top of the bank to prolong the life of the fence. Back to that survey .. it says my property line and the neighbor's run to the centerline of the railroad right of way ... with an empty house instead of the neighbor, that battle is at least temporarily on hold.
See what bad weather does ... makes me read and write. If you made it this far, more power to you ... now, leave a comment.  :)
No worries ... all is good in 'the tropics' of Southern Indiana.
at May 02, 2016