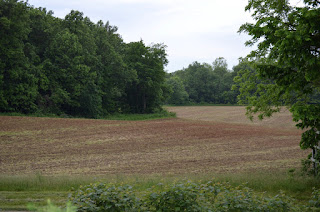 With the change of the weather forecast shoving the rain out of the area for a few days ... the local farmers are busy today and it actually started last night.

I was reading, the hounds were sleeping a little past 8:30pm last night ... when Sadie and Stella jumped up out of a dead sleep, running to the door barking and howling. I thought for a second I was having some rare company pulling up the driveway but it wasn't that. Two tractors pulled into the field across the highway and started disking.

By the time I got up and grabbed the camera I just barely caught them starting their job. It reminds me of mowing my lawn. 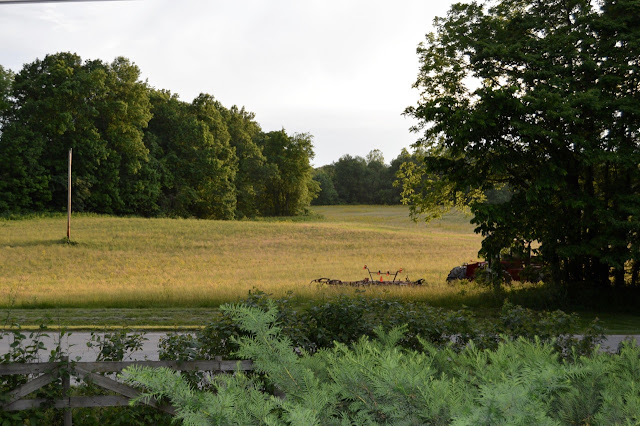 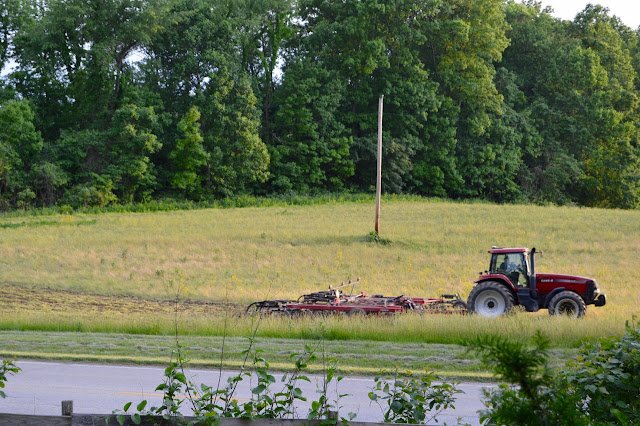 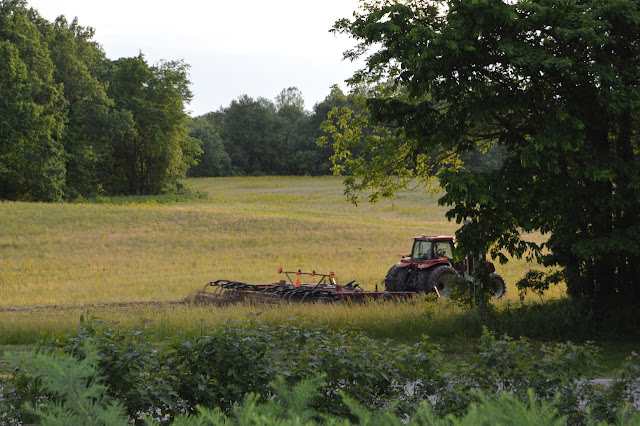 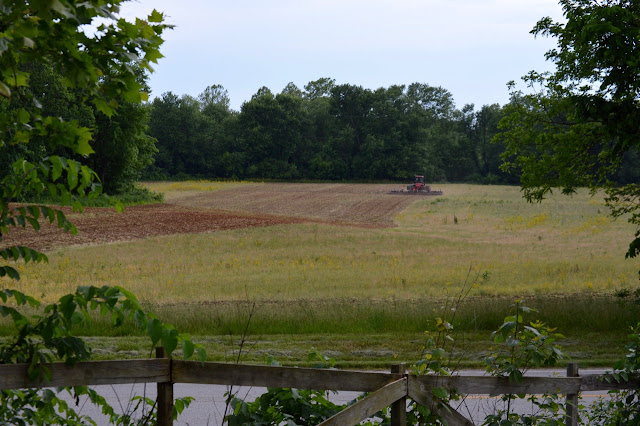 Even with two of them working at the same time, they didn't finish until after dark close to 10pm. 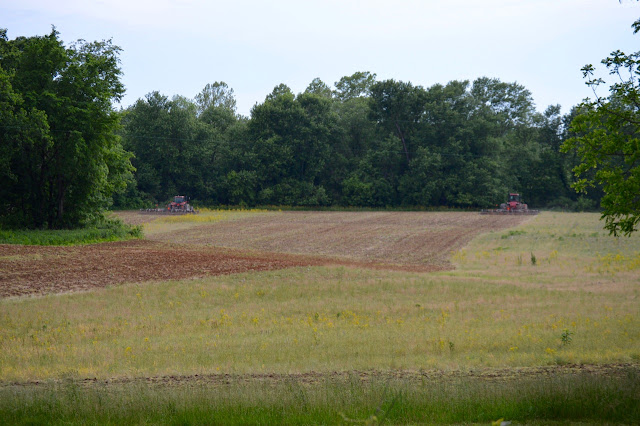 In the meantime Sadie and Stella thought they would find out what had taken place during the short intense afternoon thunderstorm. We lost internet connection for a short time as the skies turned black and the winds picked up. Less rain than predicted and the reason they could disk their field last night. 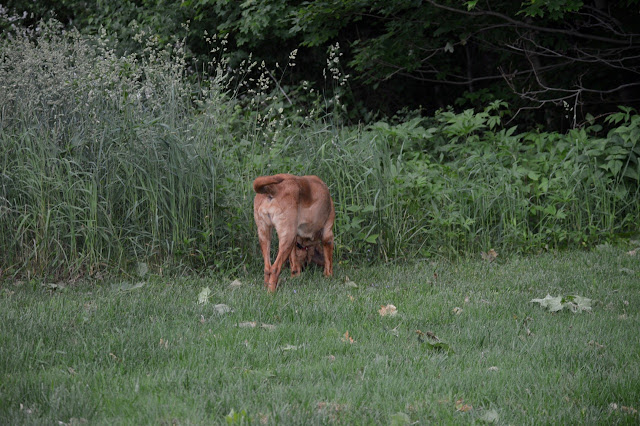 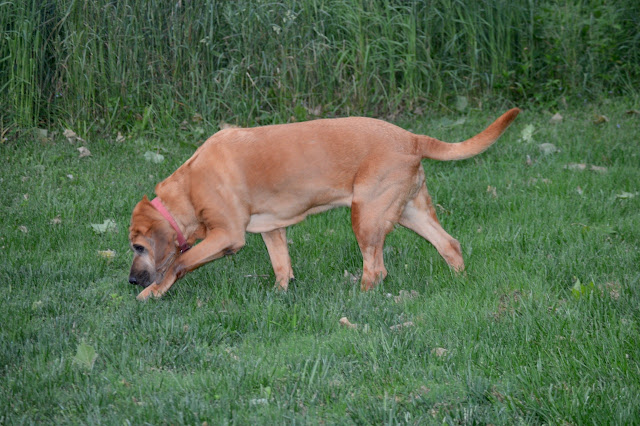 While Sadie and Stella searched around the fallen leaves from the storm, they kept disking across the highway. 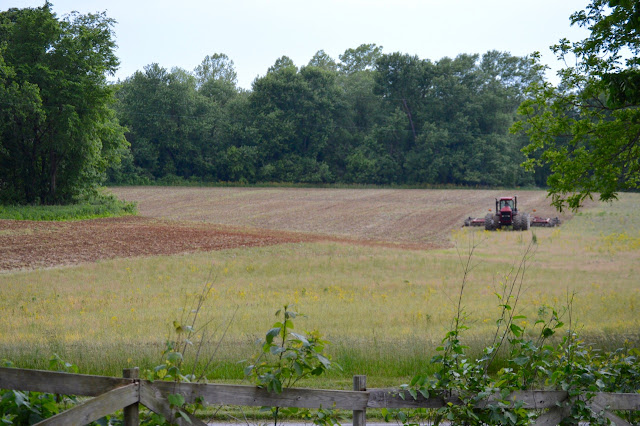 Stella wasn't really interested in the tractors but Sadie was so interested she stared at them and then started moving toward the driveway. I had to tell her to stop. 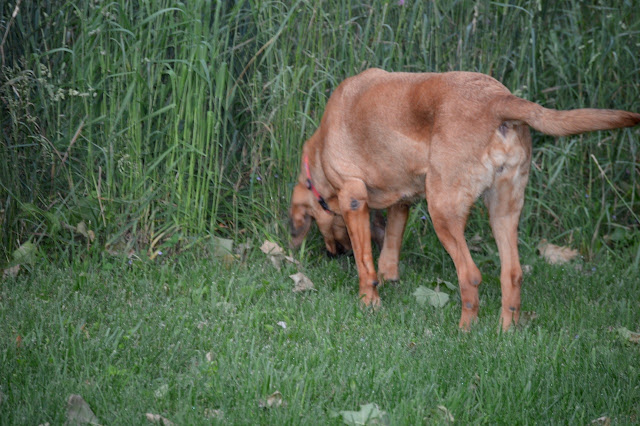 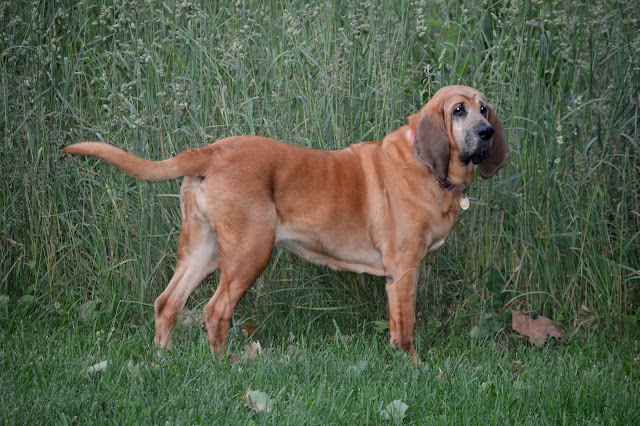 It is actually a pretty big field but I only capture a small part of it with my camera. It fills in a lot of land to the right behind those trees and probably goes as far north as 3-4 property lots along the highway. 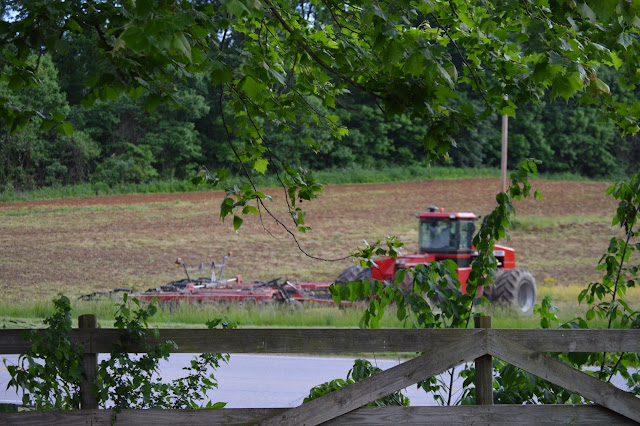 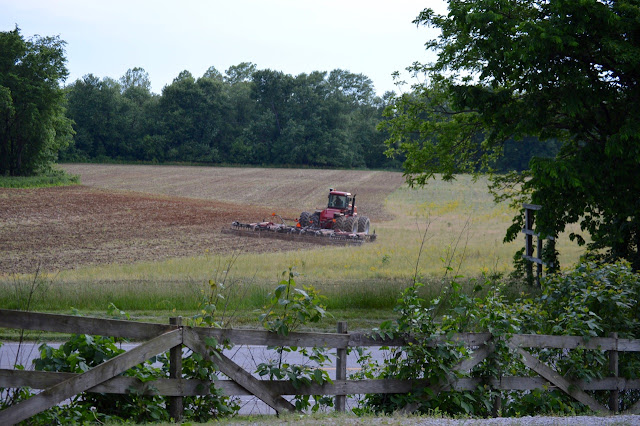 By the time the hounds and I were outside this morning a little after 7am, the field looked like this for their first of two rounds of disking. Tractors were parked, not knowing last night it was going to be so nice today. Rain forecast went from 50% to 10% in a matter of eight hours. 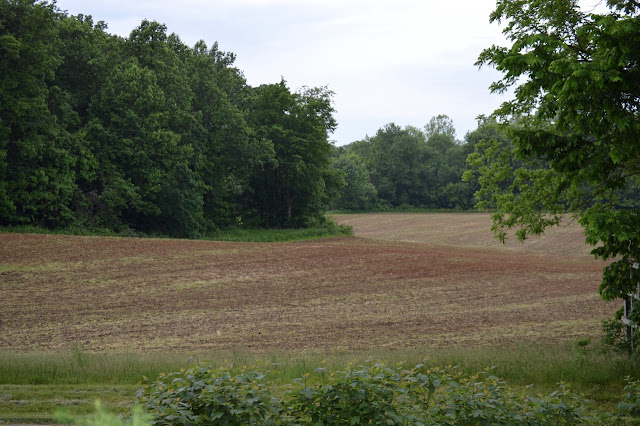 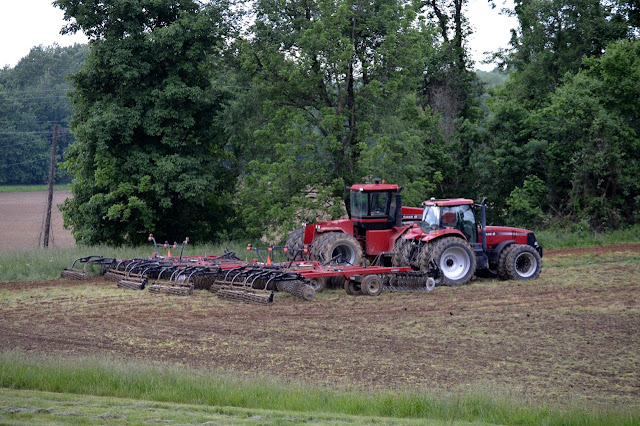 This shot through the trees reminds me of the time I lived here before June 2008. The fence line was solid trees all the way back to the burn pile. It was so thick with trees and green leaves I could not see the highway or the fields from my house.

With straight-line winds in June 2008, in a matter of ten minutes that seemed like a lifetime, every tree covering almost 80' of fence line was blown over or pulled out of the ground like a weed. Thus ... the open fence line.

Toward the back, the local utility company decided they would cut all trees under their power lines to my house, and ten feet to each side of the line to ground level. That took out another 40' of tree lined property, letting me see my neighbors house.

I'd love to have those trees back. 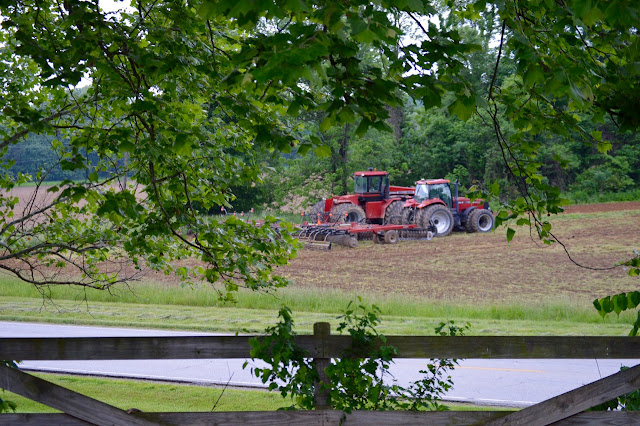 Yesterday morning a few minutes after 9am I took off in my new tow with the top down for my 40 mile loop that I drive through the country, coming home from the flat lands from the west side of town. It was the normal set up with Heidi protecting the house from the couch and the bloodhounds shut in the bedroom ... this time with both windows closed.

I could tell from the drool marks that Stella had been standing looking out the window she had escaped in a few days ago. My small camping gear locker blocked the bed from being moved again. Things were good. Yet, my curiosity got the best of me so I made a new spreadsheet to track Stella's anxiety attacks since I had her.

With date, time I left, time I returned, duration, set up and response ... I found no trends, nothing in common that set her off ... except I was gone. She and Sadie were happy that I returned 50 minutes later from my short drive. 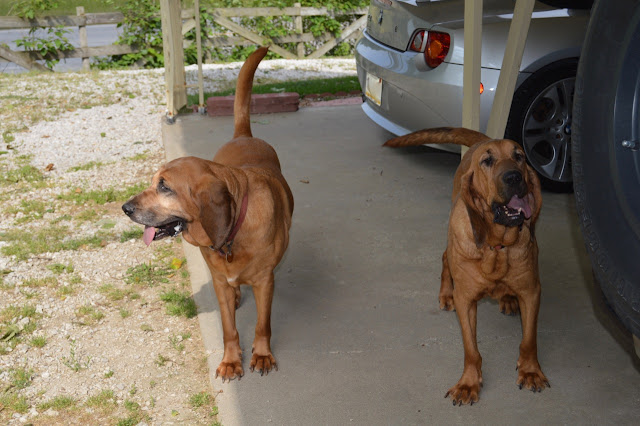 With the sun shining there, on the back side of the house facing the NE, it was a different story. Storms to the north of us. 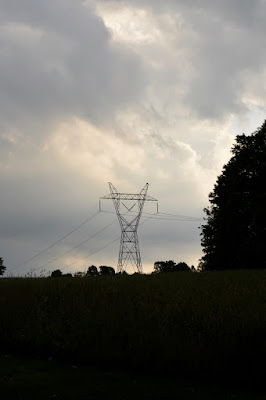 I decided it was time to put the car cover on because it was definitely going to rain later. There are grommets about half way, with a cord going under the car to keep the cover from blowing away in a heavy storm. 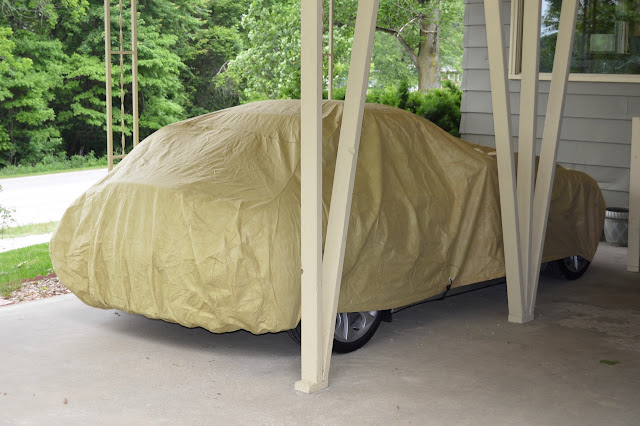 With storms forecasted for late afternoon Thursday, it was a surprise to see the skin turn dark a little after lunch. Intellicast radar showed it was going to be a pretty good thunderstorm. It was good to see Stella not pacing nor whining when loud rolls of thunder passed through the area.

My photos do not capture the intensity of the wind. I shut all of the storm windows in time and left the east side windows open so I could watch and listen to the wind through the big trees in back along the edge of the feild where we walk. 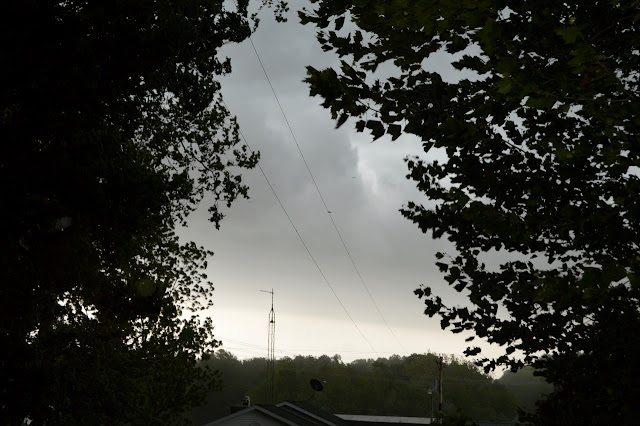 More wind with a light rain. All of those big trees are making a lot of noise with the winds ... scary to some, exciting to others. 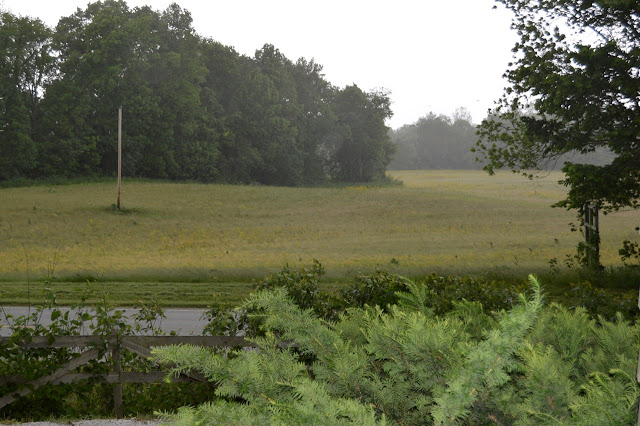 Trying to catch the blowing trees and hay ... I guess if you look closely you can see the different directions they are blowing. All of those large trees are howling loud with strong winds. 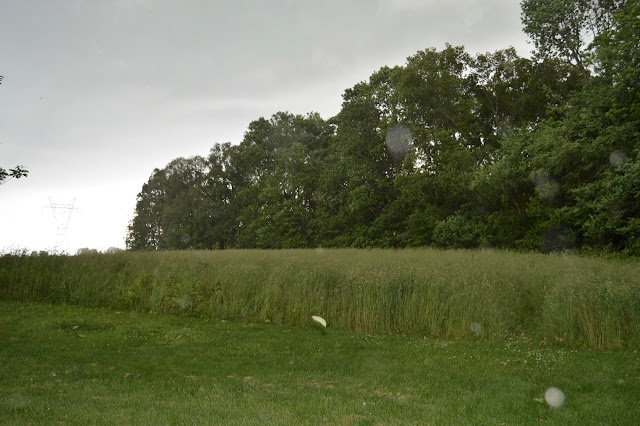 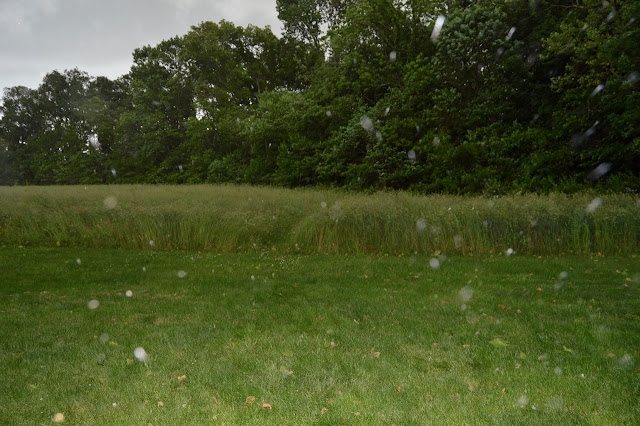 Taking a break from reading, after opening all the windows after the storm, I checked to see if they had my 2006 Mini Cooper S detailed yet and up for sale. It was looking nice enough to go buy.  :) 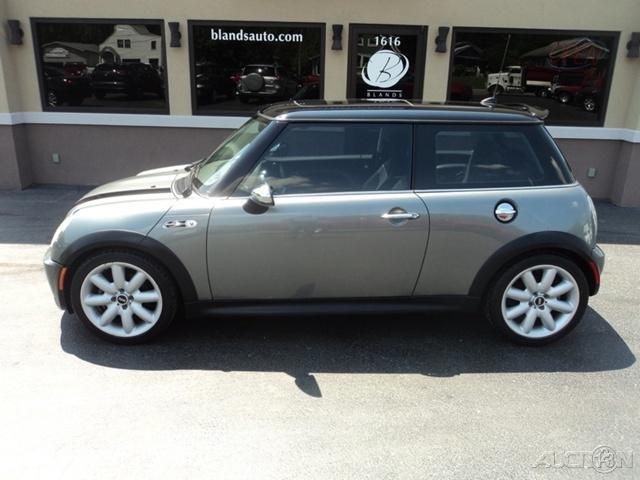 While I was pouring more coffee this morning I heard a tractor fire up and thought I'd get some updated photos of them making their 2nd round of disking...but they were only moving one. While catching that, another local farmer from behind my property turned out on the highway headed to one of his fields to work before the rain this weekend. 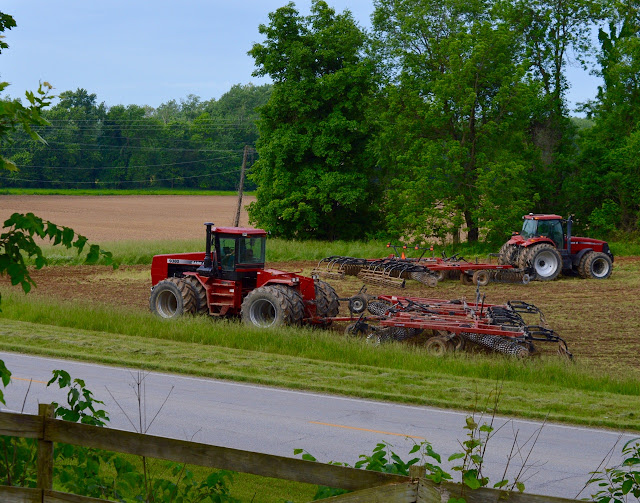 It's not clear but that last roll of disks, does a final smaller cut with each pass. Those were spinning pretty fast when I took the photo. 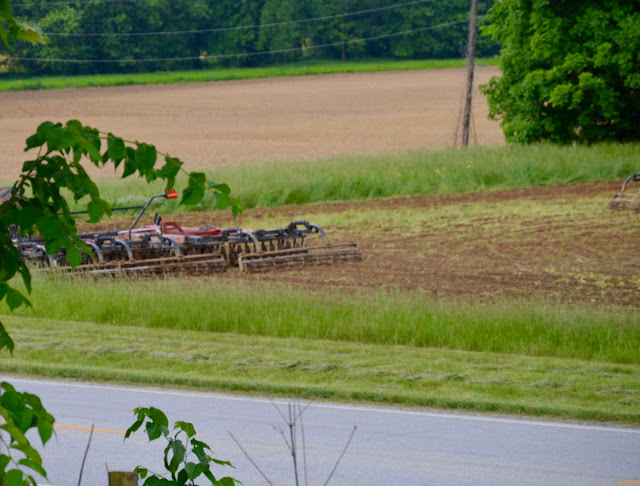 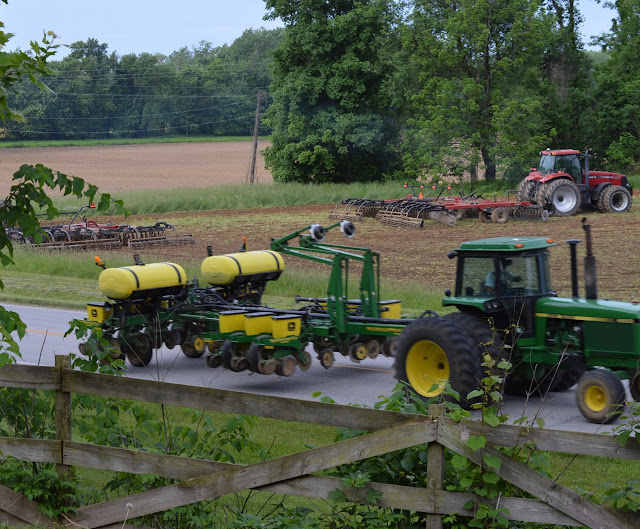 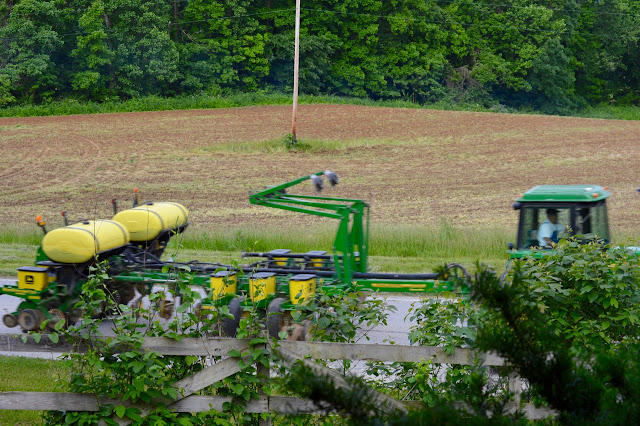 Well it's time for another test with Stella. The sun is out and it's time for a morning drive. I'll post later what I found out yesterday about the history of my 2003 Z4 ... buying used cars are always dangerous in my book. There is a reason the dealer stresses "Sold As Is" in the paperwork you sign ... but I have found a hidden jewel in this 13 year old car from what information I received yesterday.

On a side note, I have already placed an order for new black lug nuts to replace those ugly rust color ones. It made me wonder when I first looked at the car where it had been since it had low mileage. 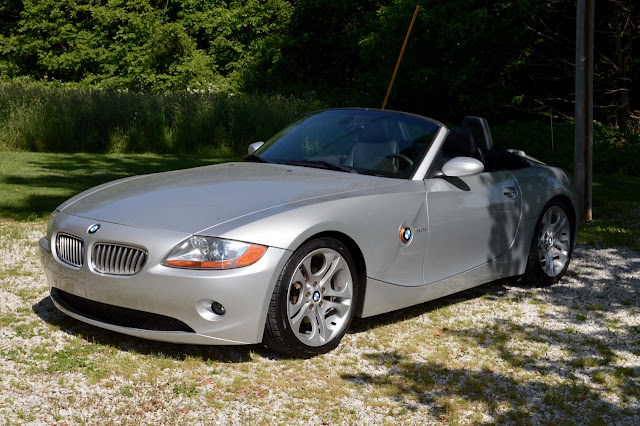 Will the rain stay away on Sunday for the 100th running of the Indy500?? Time will tell but I think it's looking better today than yesterday.

Another quiet Friday here in 'the tropics' of Southern Indiana.