Stella Has Anxiety Attack 2nd Day In A Row 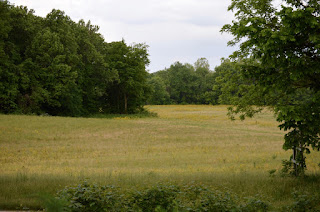 I am beginning to think the field across the highway will not be planted this year. I'd have to look back through my photos to see when the last time they did not plant anything.

I believe it's dry enough to get their equipment into that field but thunderstorms are forecasted for this afternoon. That will give me enough time to get all the outdoor stuff done and maybe even a short drive in the Z.

I was up way too early this morning, a few minutes after 5am. Instead of tv's and computers the past two days and nights, I've been reading books and that puts me in bed way before midnight. It's also nice to sleep all night instead of getting up numerous times. I know reading is much better than tv's and computers, especially before going to bed, yet I am also reading during the afternoons.

I stayed up this morning and woke the hounds up around 6am by just pouring their morning kibble into their stainless steel bowls ... they heard that behind a closed door and they were thrilled.

It looks like someone else is getting an early start on their day also. 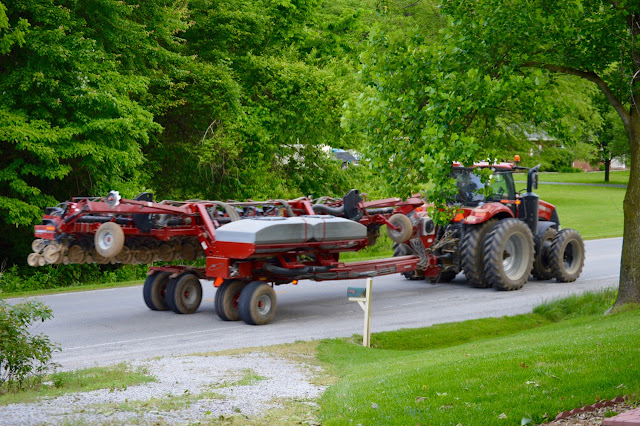 To get you caught up and get my mind caught up, I guess I'll start with Wednesday morning. It was a 12 minute test for Stella and she failed again.

I was reading on the Z4 forum the other day that Country Mart gasoline was rated high and I have a station near me that I wanted to check out. This place has changed hands so many times that it may or may not have 91 octane gas. It was good to see they not only had 91 octane but with no ethanol.

So that was going to be my 12 minute test for Stella. Following my process of "lets she what she does in this situation" ... I did not close the window all the way but left a small window fan that goes across the width of the window and is locked in by the window frame sliding down on top of the fan.

Thinking now, I could have slid the storm window down behind it since it was just a test but I didn't think of that yesterday, so the window screen was behind the fan.

It was good to see as I drove up the driveway that Stella was nowhere to be seen. :)  I wanted to see what she had done so I walked around to the window to look in from the outside ... screen complete gone!!!! No fan visible. She stood on her back legs to look out the window at me so I could tell there was no way she could get out the window.

She tried to move the bed but I had blocked it with my locker full of camping stuff that sits about bed frame high. Otherwise she would have gotten out of the window again by getting on the bed.

The fan was okay but she had tore that out of the window. Then with her front paws had tore out the screened window all the way but the frame stayed inside the storm window this time.

I was not happy with her results. She had been great for 3 months when I was gone and even on Monday when I was gone for 4 hours. So, the only thing that has changed in our routine or life ... it has to be the new car.

How could that be? Contessa told me her two dogs can tell a difference in which car they are taking so it might be the sound of the car that is upsetting her.

I had an appointment in the afternoon and by the time I drove to and from, sat through the appointment, I was going to be gone almost 3 hours. That had "disaster" written all over it. Too hot to take her with me and leave her in the car even with the windows cracked open a few inches. It was 83°

I returned that afternoon a little over 2 hours. There wasn't any damage but the windows were closed. Last night I took a drive for about 45 minutes, leaving her in the same set up ... windows closed, bed blocked ... no damage.

So maybe ... just maybe ... she is back to being okay with me being gone. In the meantime I'll take a short drive today before it rains to see what she does. I have let the car idle with Stella outside so she can hear the sound. She just sat there staring at me and staring at the car with her eyes barely open.

I might have found though where all of this separation anxiety came from last night when I was talking to the original owner of Stella. The story about her background kind of changed a little from what I was told when I picked her up which to shows me how all this anxiety started.

The family moved from a farm to the city. I knew that but what I did not know, was there was a period of a year that Stella was left with a relative until they could find a house with a big backyard. She had lost her owner. I did not ask how often she went back to visit Stella.

Then a year later the original owner picks her up and takes her to the city with a fenced in yard ... but since she is an expert in escaping ... that is all she did every time they left her in the backyard while they were gone ... she escaped and tormented the neighbors.

Then Stella is given to a new owner that lives on a large farm, which is where I picked her up 7 months after she moves there, on August 30, 2015. So, in 6 years of her life she had moved 4 times and had 4 owners counting me. Seems obvious why she has separation anxiety doesn't it???

By yesterday afternoon Heidi was wanting to go on a walk again. She sprinted toward the field so fast I could barely catch her with the camera. From the very beginning the bugs, flies, gnats were out in full force ... simply miserable. 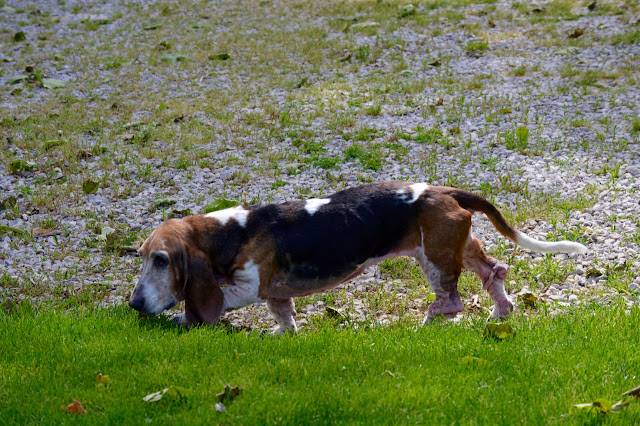 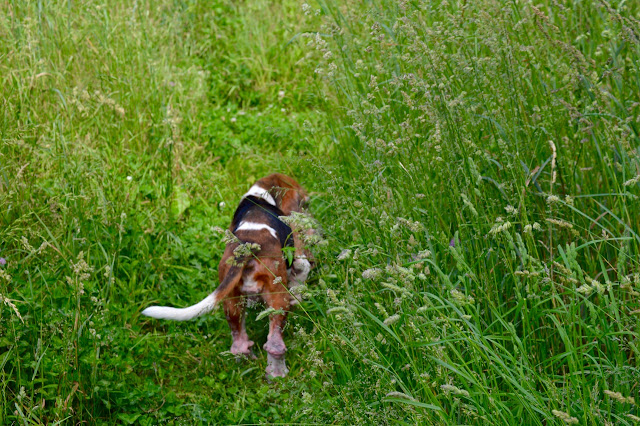 Let's just say that we didn't make it far on this walk before turning around and going back home. I wussed out. When I saw this bird jump from the tall grass in front of Sadie I thought there might be issues but nothing happened. 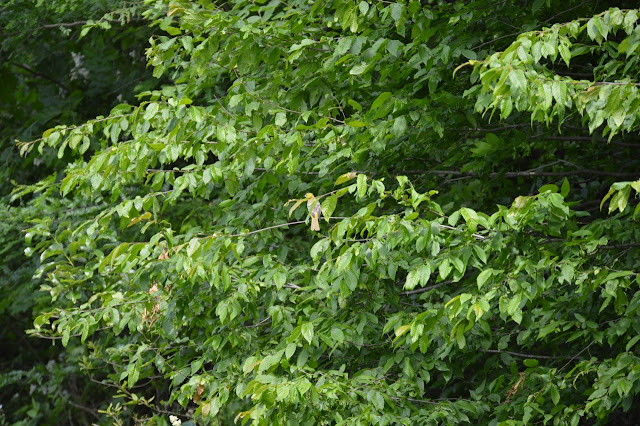 Heidi is off to a good start but the flies are bothering her along the way. Is it me or does it look like she has gained a little weight? 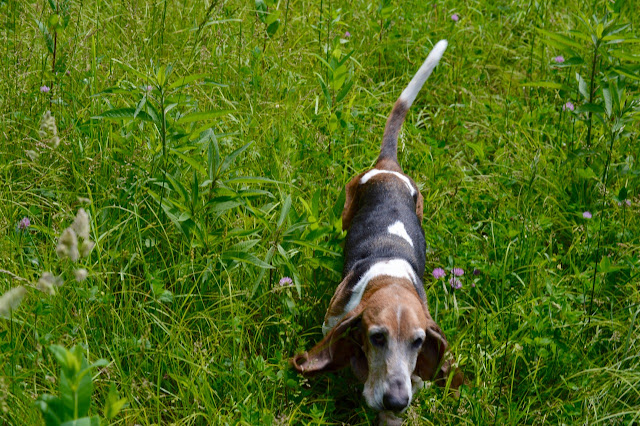 At this point in time, Heidi stops and doesn't move. I'm not sure what's going on and by the time I walk back to her, she turns and starts trotting for the house. That is when I decided we all go back together. 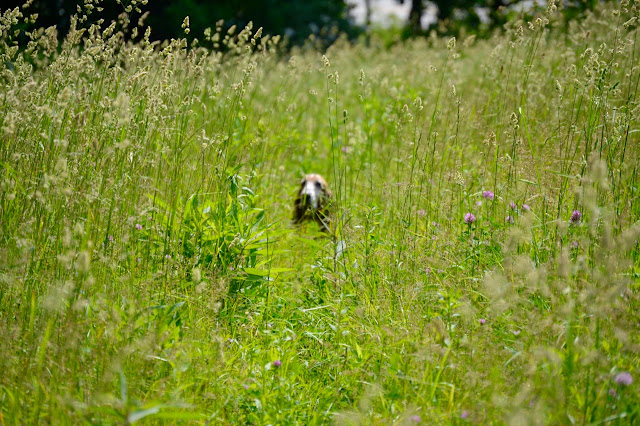 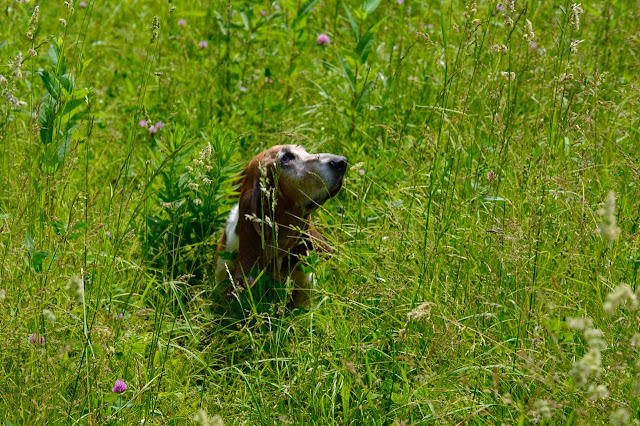 A few hours later, Sadie is still wanting to finish the walk so we decide to take an early evening walk. Heidi had a huge red rash on her stomach and legs ... her skin has really been looking better recently. When she didn't get off the couch but rolled onto her back to show me her stomach ... I'm serious ... the bloodhounds and I decided we would get the walk in. 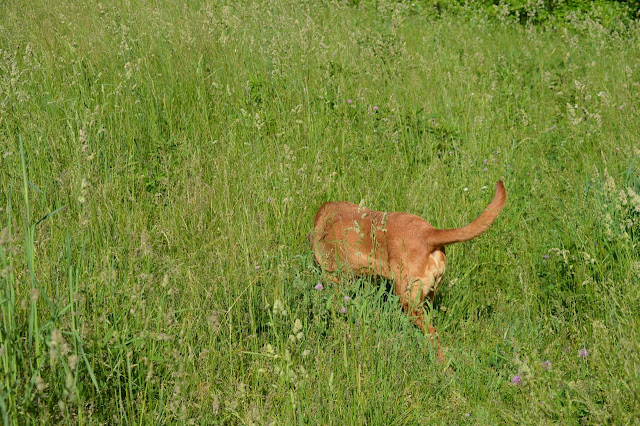 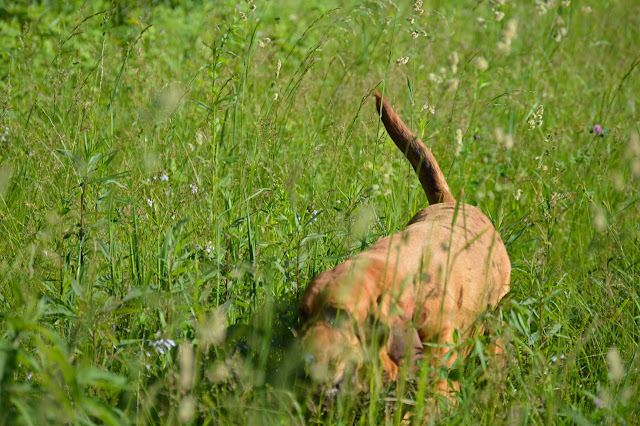 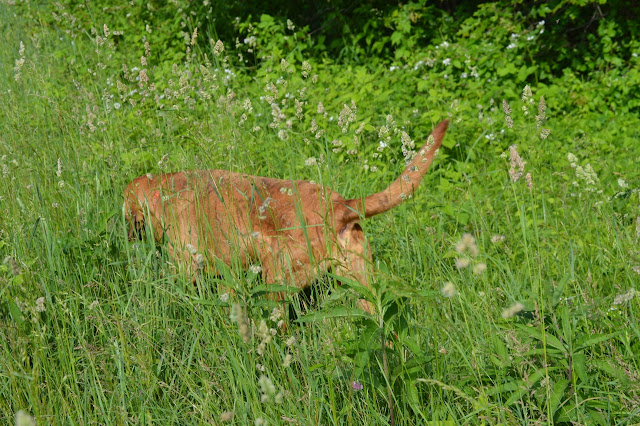 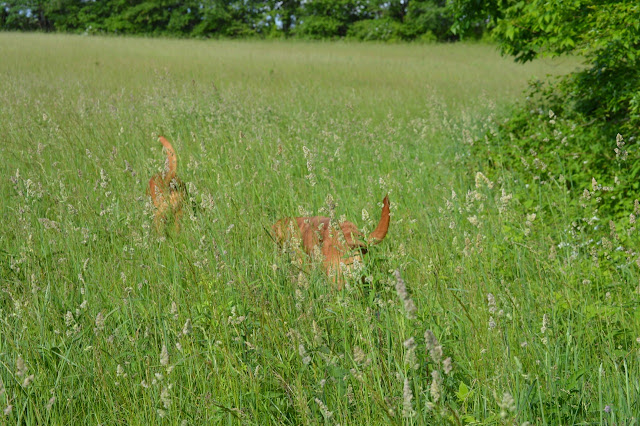 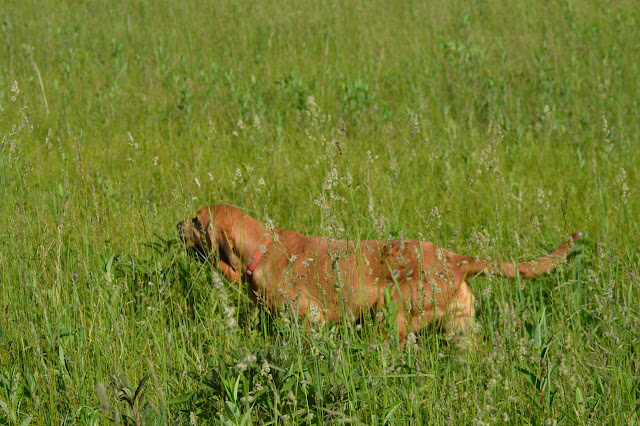 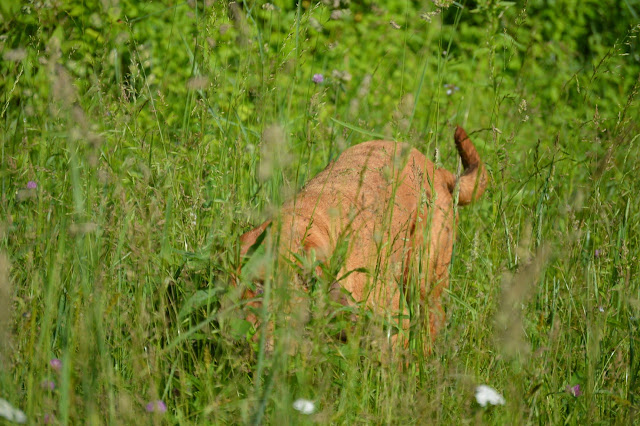 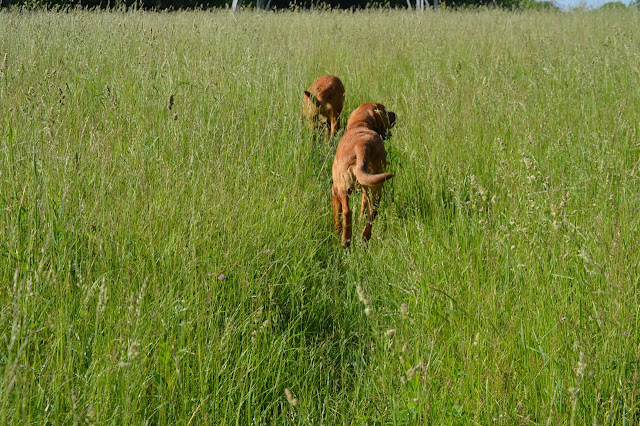 Another day of walking in that tall grass and I found zero ticks on the hounds but I had a couple to pull off of me. So for a month the ticks disappeared from the hounds after giving them NexGard.

Since Stella was woke up about an hour earlier than her normal time, she was tired and not interested in getting any further away than the corner of the FJ. Her routine was off and she was more than happy to go back inside and continue her morning sleep. 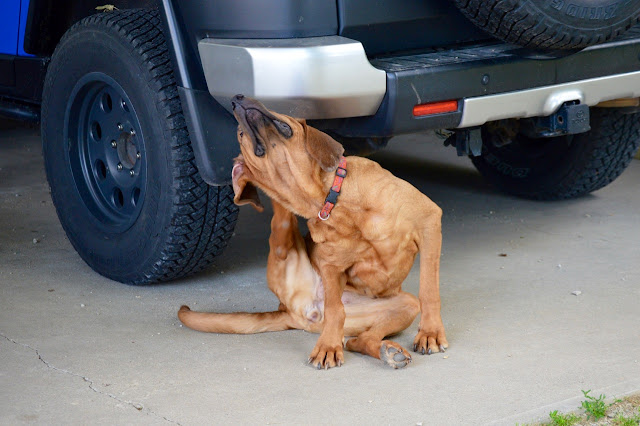 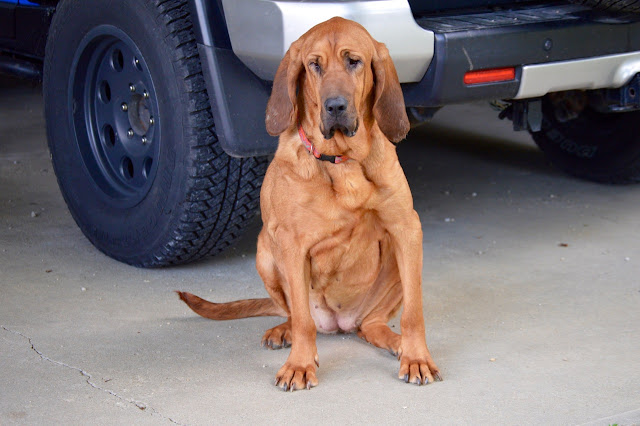 All the storms are coming from the west and should be here later this afternoon but this was a morning photo looking NE. Maybe the storms will do their normal split at the state line and miss me by following the Ohio River and I-70. I can dream can't I? 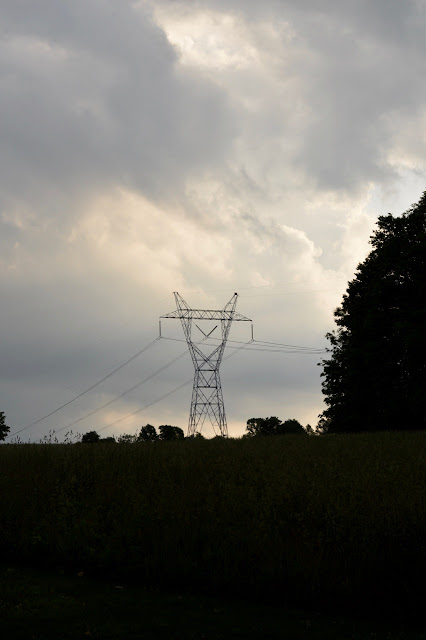 It's hard for me to blog just a few days a week ... too many photos and too many stories.

Sunny this morning in 'the tropics' of Southern Indiana.