Heidi Goes Outside On Her Own 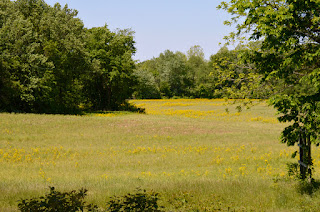 I know today's blog post title doesn't look like it means much but it's been a rare time these past 20 months, that Heidi jumps down from her chair and runs to the door when asked "do you want to go for a walk?"

The few times she has done that I have always taken that as a sign she is feeling either good or better, during her skin issues. Today was one of those days and a little unexpected. Of course she did not chose to go on the walk with us but wanted to wander around the yard while the bloodhounds and I took off for an early afternoon walk. 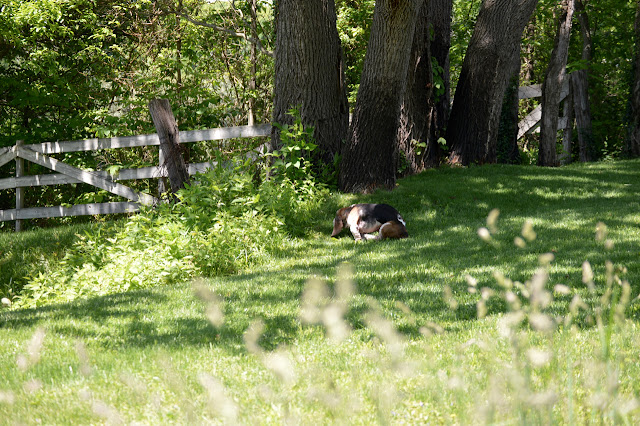 She has picked out one of the best parts of the yard today, waiting for our return. That previous photo caught her doing what she does a lot of ... scratching. She's been doing that for so many months I am not sure if it's a habit or something actually itches. Looking where she itches, there is zero skin irritation.

As we walked into the yard from our walk, Sadie and Stella must have forgot that Heidi was outside because they immediately went running toward her to see if someone was in 'their' yard. Although there are no loose dogs running in the neighborhood, they have to make sure their yard had not been invaded. 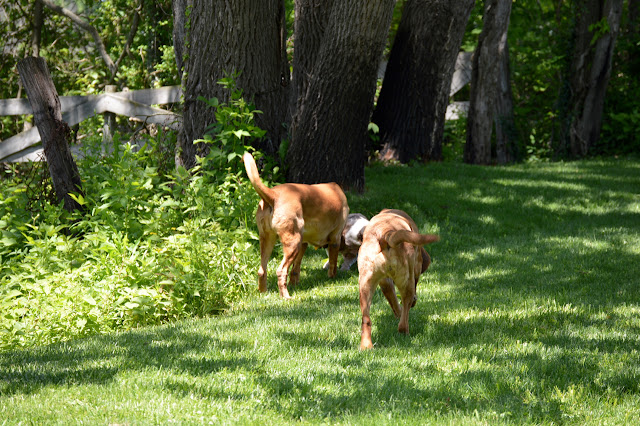 After they verified her ID, she was okay to them, they were more interested in getting back inside for their afternoon siesta that they take after every walk they go on. 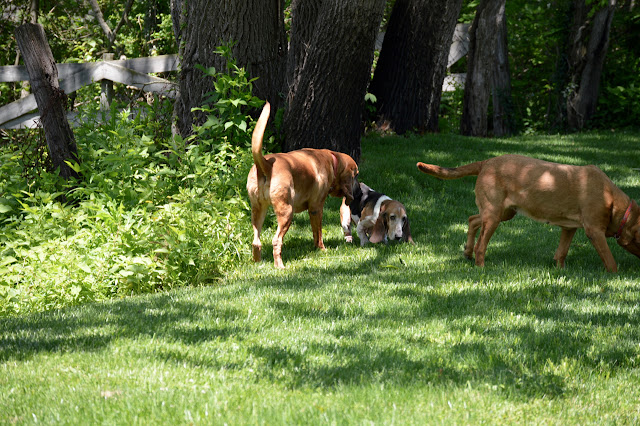 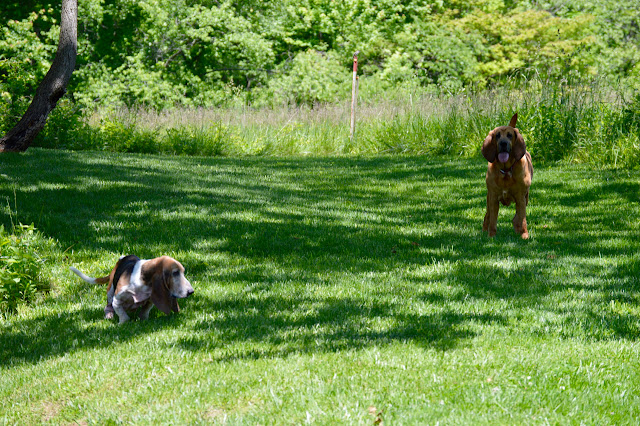 I did something different today when applying the water/vinegar mix. I started last week with cotton balls, then went to a spray bottle and dabbing with a washcloth to keep it from running. Today I soaked the wash cloth with the mixture, squeezed out some of the mixture but still damp enough to spread the mixture on her.

I liked that way the best. It seemed to cover her skin better and she rolled on her back to have it done instead of trying to escape the spray bottle application. 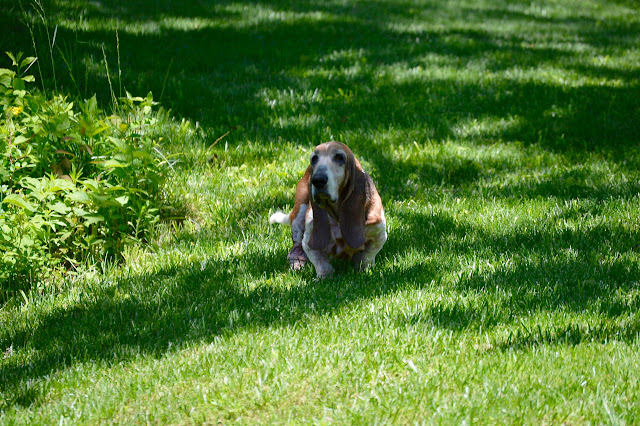 I've decide to not expect any drastic changes to her skin until next fall. It might take that many months to kill the yeast infection or whatever has been tearing her skin up. Also we are moving into allergy season which may be a factor. As long as her skin does not get worse and I continue to see healing I'll be happy with that.

It's been a long time fighting this skin issue after having very little if any improvement at all. Today there is no redness yet a lot of "elephant skin" along her neck and each side of her face but it looks like it's healing. Her feet and legs are not red with no inflammation. All of her skin is soft.

Sadie and Stella were bothering me non-stop to go for a walk. It's been a beautiful day so I decided to take them out mid-afternoon instead of waiting until later. It was perfect weather ... slight breeze, sunny but not hot and for some reason no gnats!!

Here is Sadie giving me her stare to see if we really are going on a walk. Stella had already taken off on the path to get the walk started. 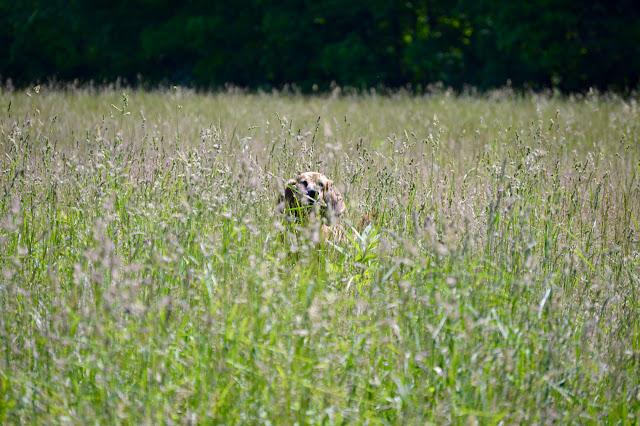 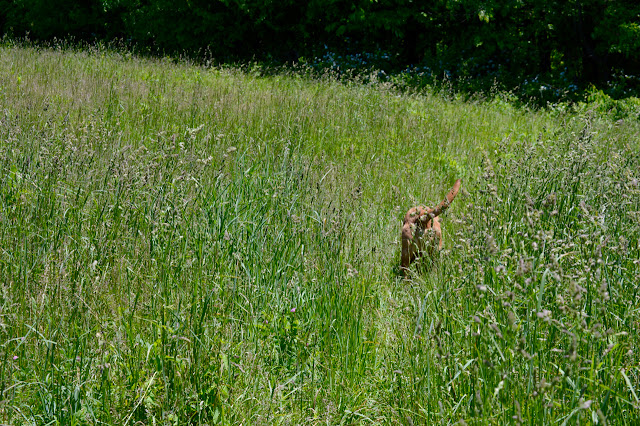 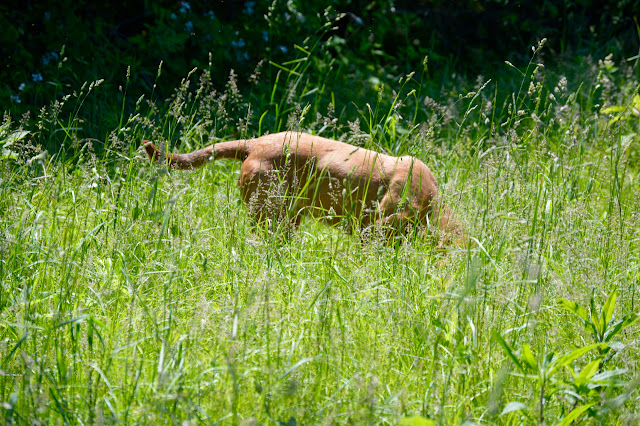 It's a little boring at times writing about the same thing every day but to them every walk is different. I change back and forth on the photos with a 55-200mm zoom and sometimes I walk with the 18-50mm lens. They don't seem to care either way. 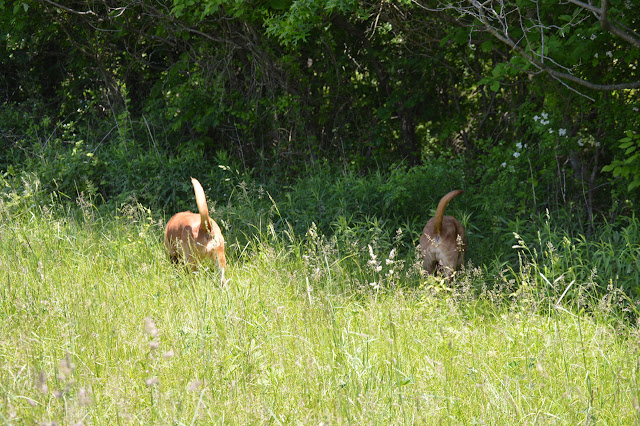 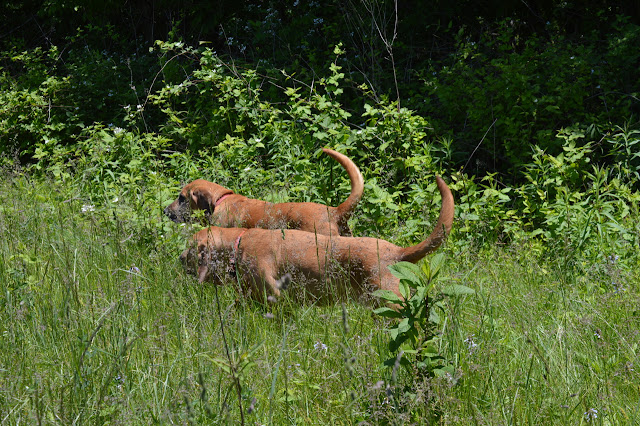 Again today I decided I was going to call Stella to follow us instead of letting her roam in the right corner of the field. I didn't want to leave her behind or let her go at her pace I guess. She turned my direction every time I called her and she was still able to go at her pace as she explored. 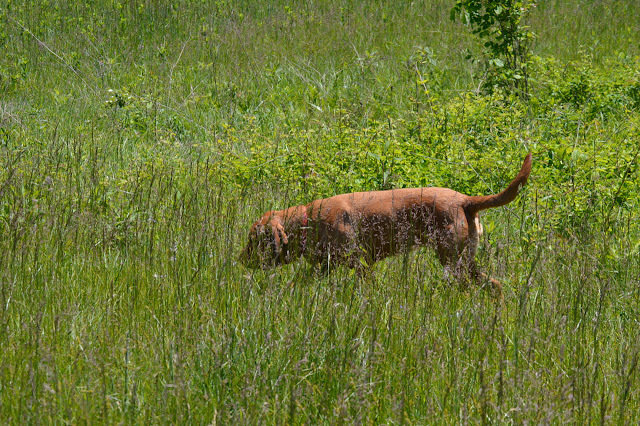 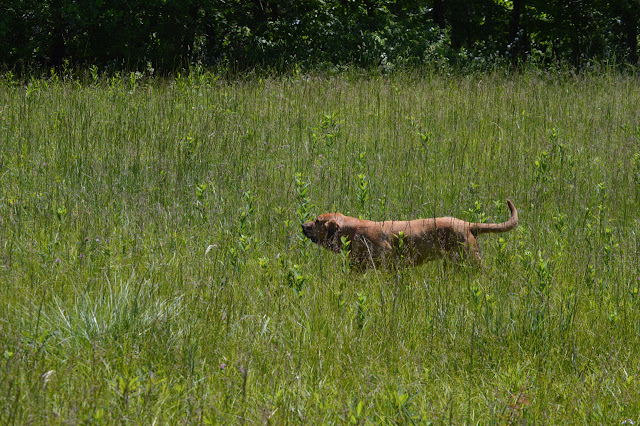 It's hard to tell Sadie and Stella apart, but this is Sadie in between two photos of Stella. 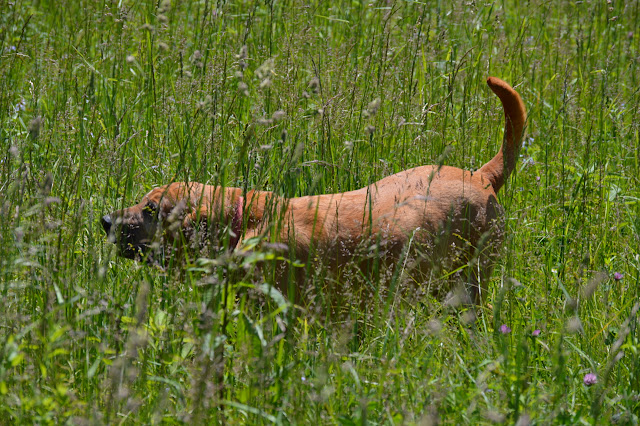 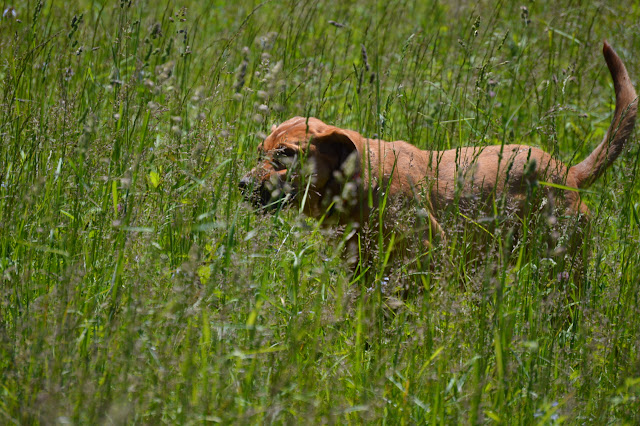 The recent rains helped this grow in the middle of our path. I have no idea what the name of it is. 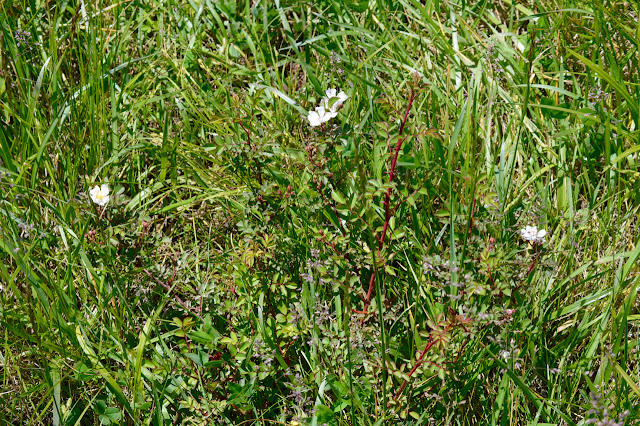 Stella wasn't into much running today ... she was just happy to trot along enjoying the walk and the sunshine. 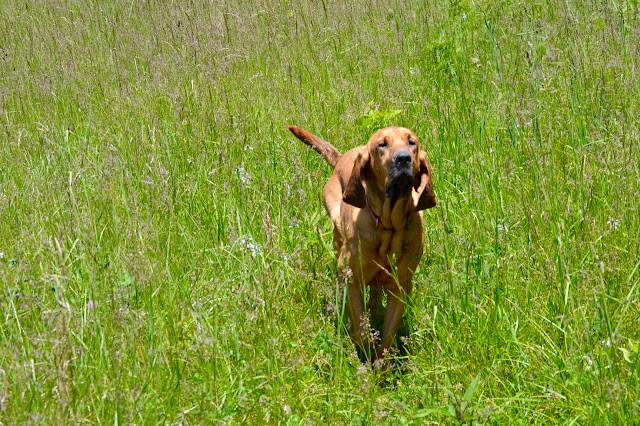 Her is a second look at the new bird nest. I wonder where they found the moss type of building material? 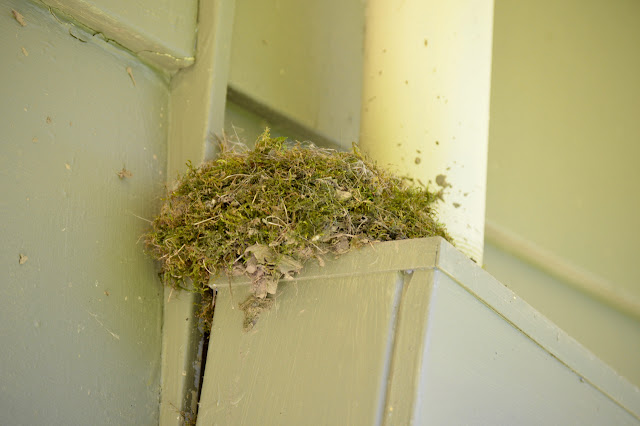 It's really hard to believe this week is almost over. Time moves so fast when you are retired. It is also different this year in that I don't have a list of 13-15 things "to do" on the house like I did last spring. I still have some ideas for some future blogging but have not had the urge to start that yet.

As far as driving around the local area for photos ... the past two times, Heidi has acted like she was car sick and the bloodhounds did their share of whining before laying down in the back ... maybe the excitement of riding is over for them.

I received an email this morning telling me that I had posted "Hounds Demand a Walk" .... the problem is the time between I actually posted and received this email was almost 24 hours difference. Google's feed burner program is a little off.

The ticks have seemed to disappeared recently since I have not be pulling off the same high number of them from me after a walk through the field. I only had two of them on me today whereas last month I was finding 4-5 per walk on me.

I might post again later today, not sure. The hounds are sleeping but I have a feeling they will want an early evening walk later today. I think this place needs a couple of chairs, maybe a small table to hold a book and/or beverage. 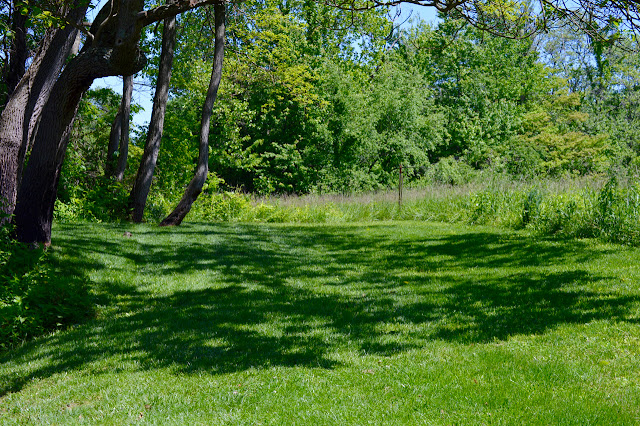 The weather is fantastic today her in 'the tropics' of Southern Indiana.

at May 19, 2016
Email ThisBlogThis!Share to TwitterShare to FacebookShare to Pinterest
Labels: Bird Nest, Heidi In Yard, Heidi's Motivated