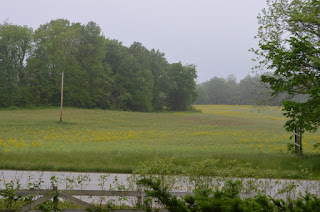 Wednesday started with more fog, light rain, some sunshine and then more drizzle. By the evening heavy thunderstorms passed through. Originally the forecast was for rain every day up to Friday but I could see on Tuesday I was needing to mow the yard. Again.

I waited until about 11am with the sun out and a pretty strong wind coming from the south/southwest, I thought I might be able to mow in between rains. So at 11:15am I checked and there was little dampness. It was dry enough to try to mow and I could stop if it was too wet. I was able to finish the whole yard and 15 minutes after I finished it started storming again. That was Tuesday.

Wednesday morning was looking like more of the same. The hounds were low energy, didn't want to fetch, to play or run. They turned back inside to sleep while I continued to read about dog yeast infections and atopic dermatitis. 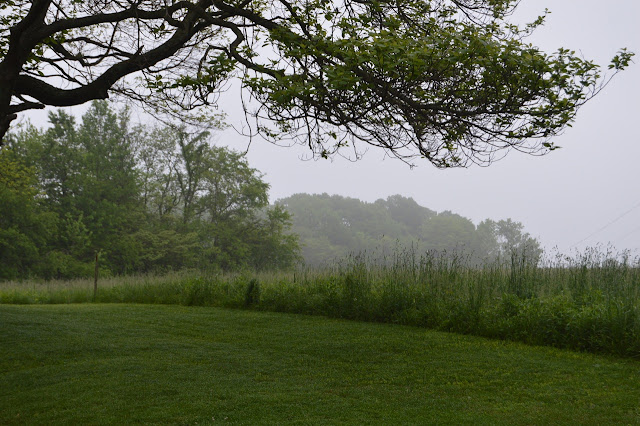 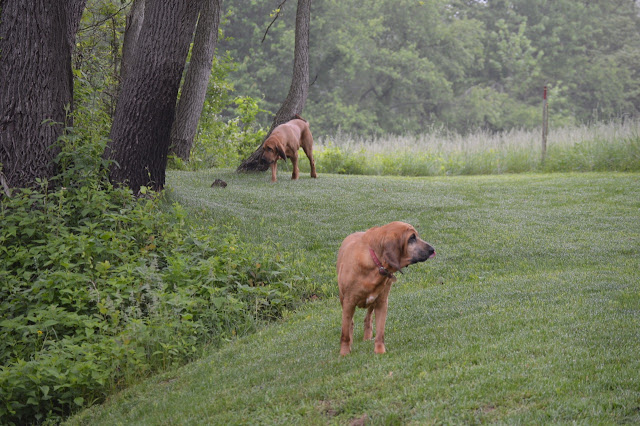 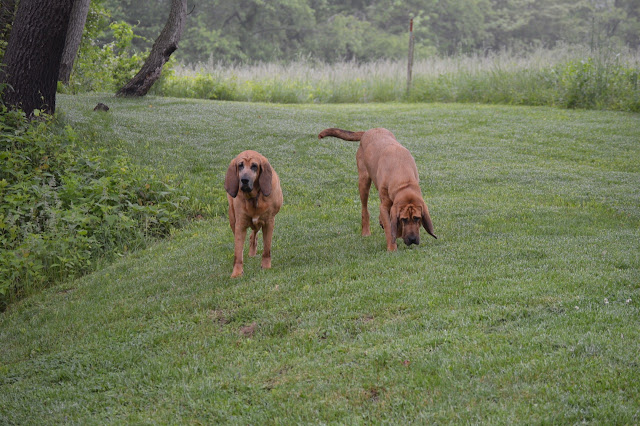 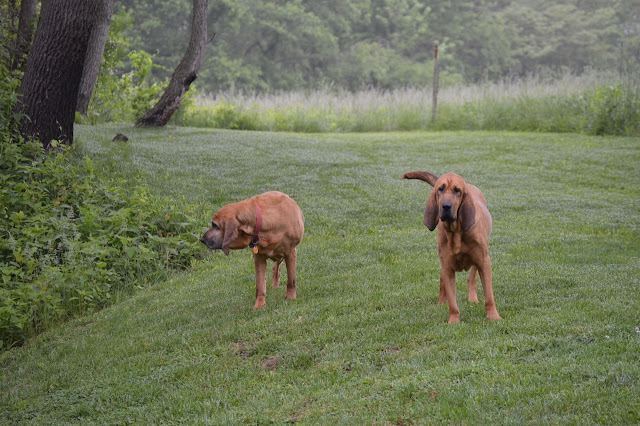 Later after their lunch, the sunshine was out so I grabbed the camera, told the hounds "lets go" and just inside the field my shoes and legs are soaked. The ground wasn't muddy but soft ... I kept walking. I was going to get them a walk in one way or another. 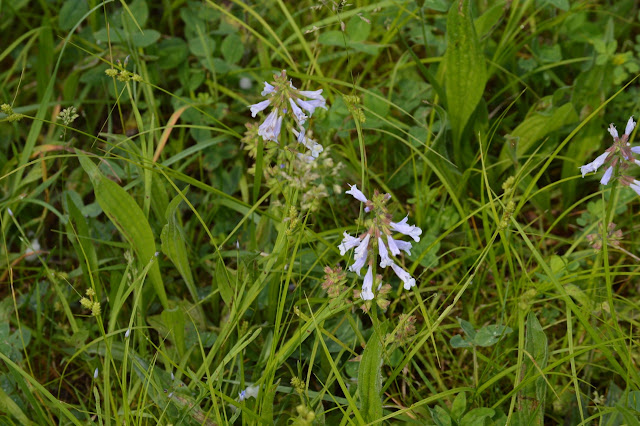 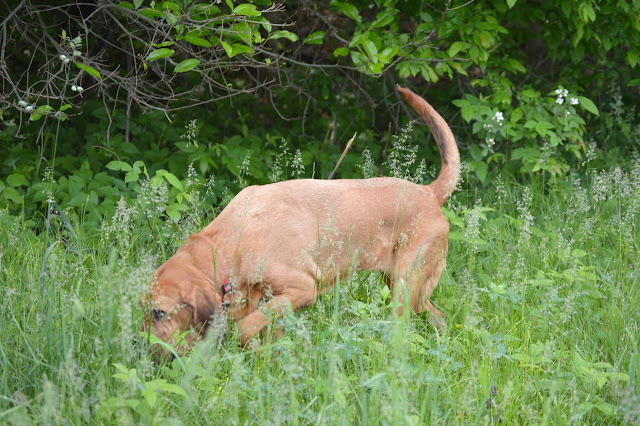 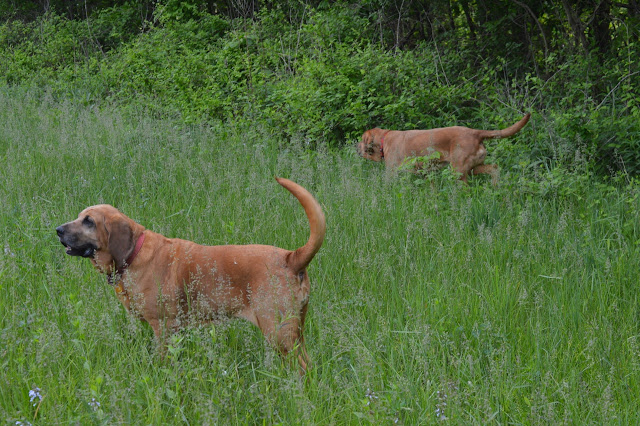 Just in a matter of days, the hay had grown enough to almost cover our worn path. I could barely see where we normally walk. It's also getting to the point that I can barely see the bloodhounds when they are off the path. 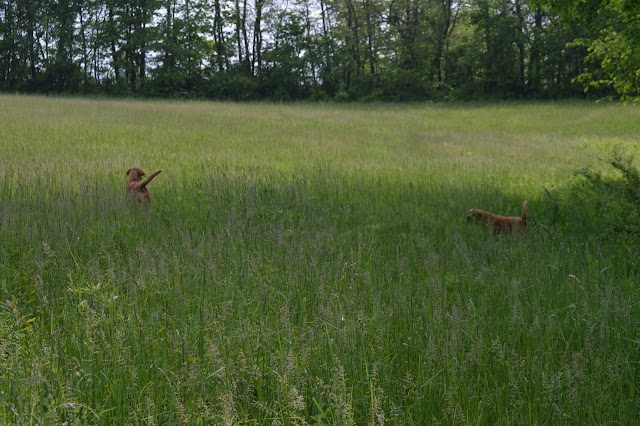 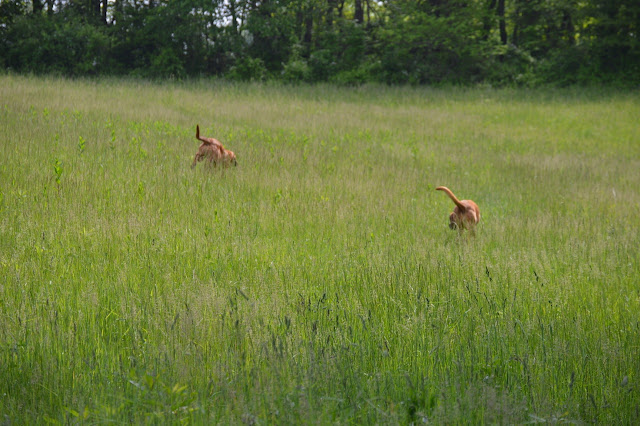 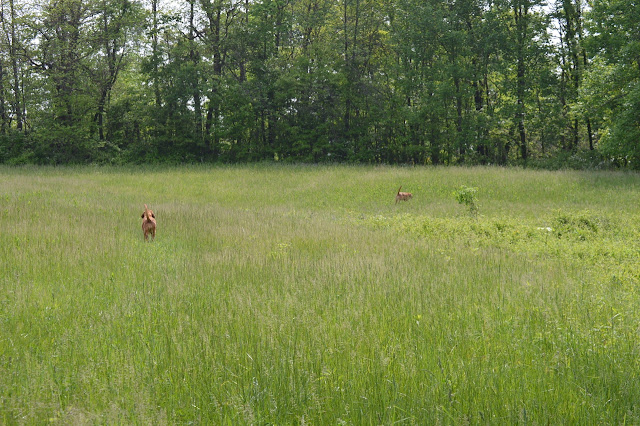 They enjoy their freedom out here and it's nice to have them in the opposite direction of the highway where they can go without the danger of traffic. 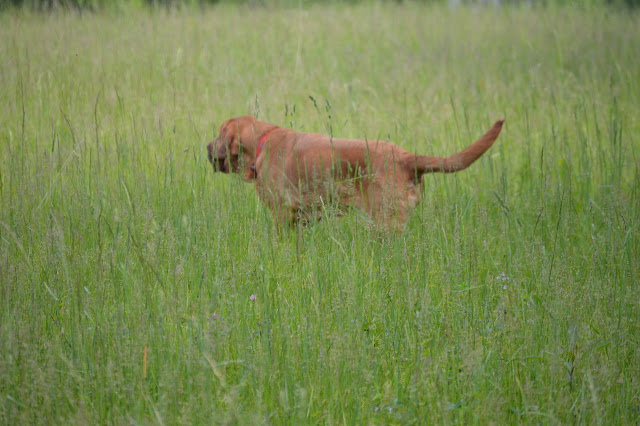 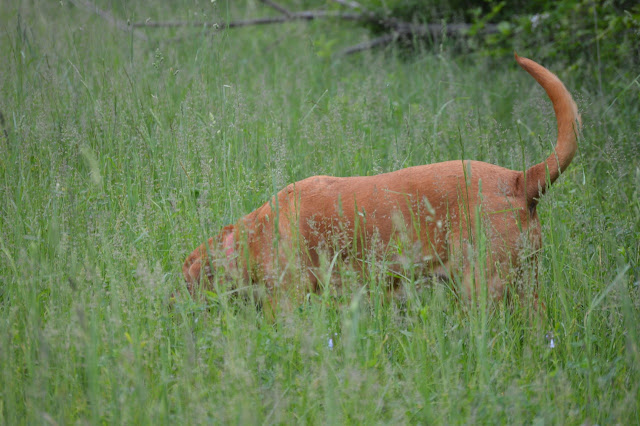 You can barely see our normal path from the fast growth of the hay with all the rain. This date last year the farmers had already planted their fields. Now some of them around me are plowed but not planted. The one straight across from the house has not had the chance to be plowed yet due to rain. 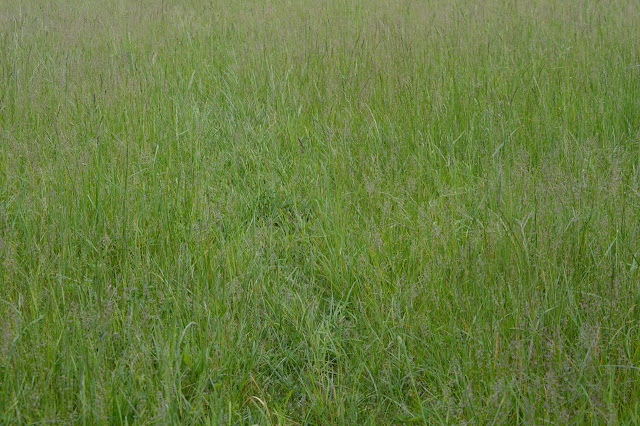 The hounds head back to the house. There was little gnat traffic today so that was nice. Plus I didn't find any ticks on any of the hounds after their walk on Wednesday. 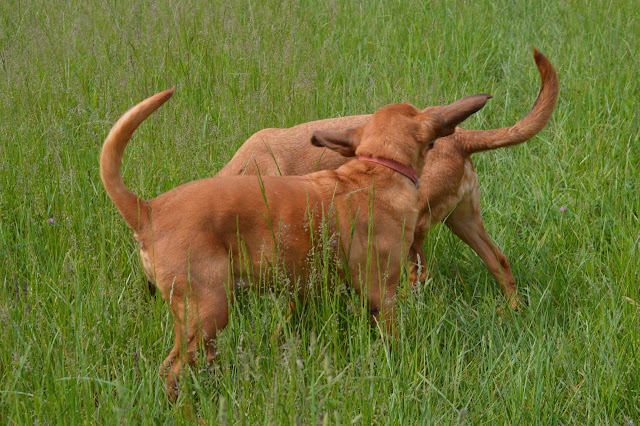 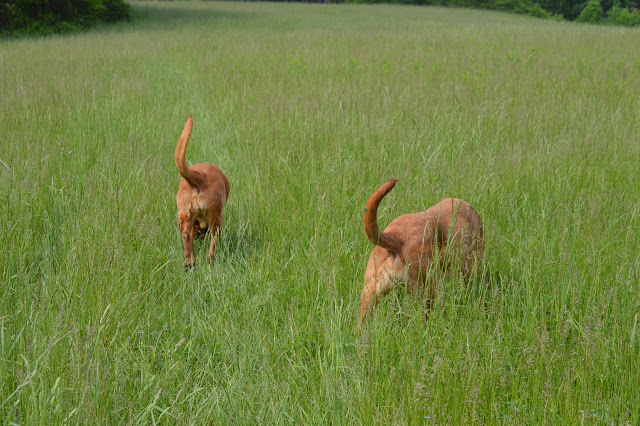 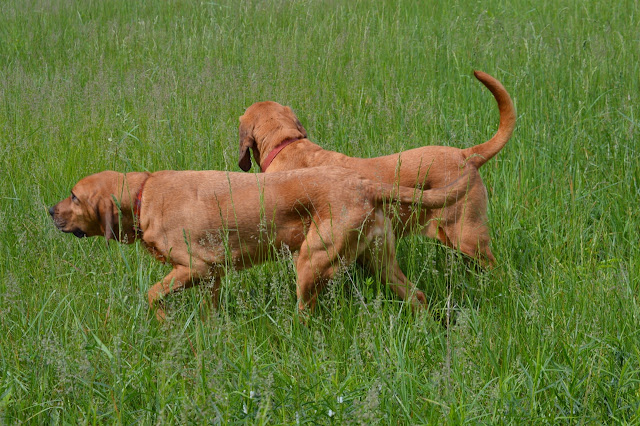 Stella took off running for the house on her own and by time I had my camera in position all I saw was Sadie and Stella had moved around the thick hay to the right. 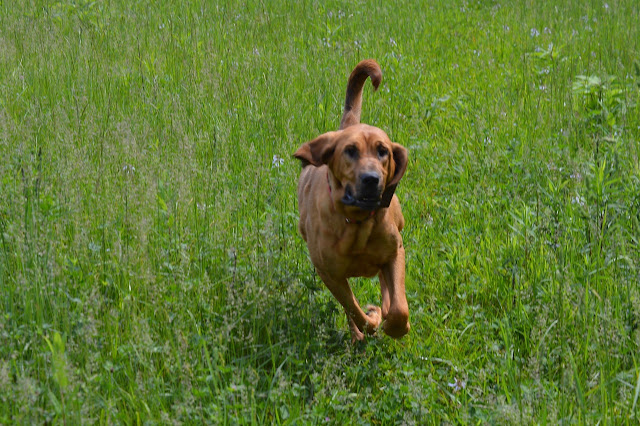 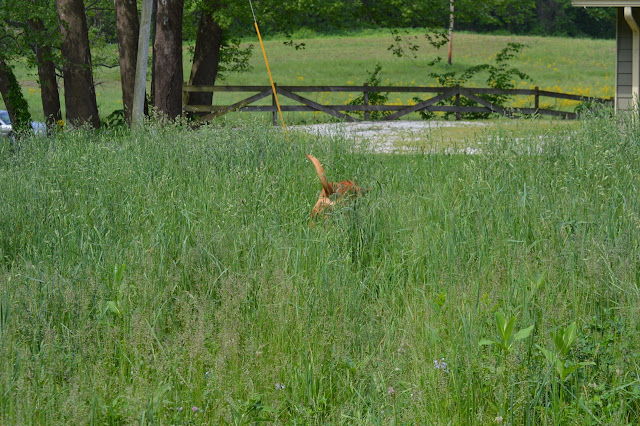 Shoes were making squishy sounds as I walked and my feet were completely soaked. I put the shoes and socks on the window sill the rest of Wednesday to dry out. 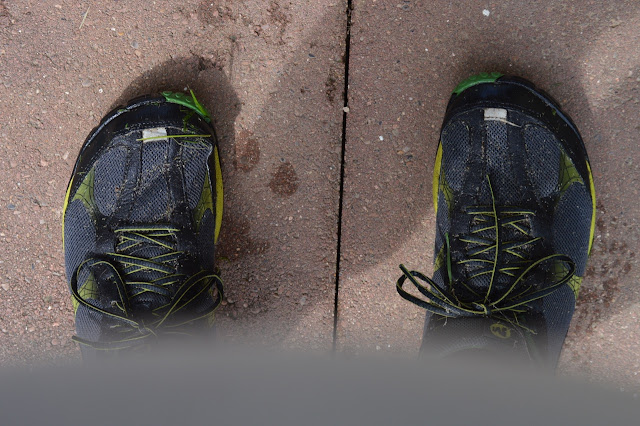 Later in the afternoon we sat outside in the sunshine. I picked Heidi up off the couch and took her out to the yard where she explored all the backyard. It wasn't two hours later the sun disappeared and the Wednesday evening rain started again. It was pretty dark quick but the severe storms were south of us. 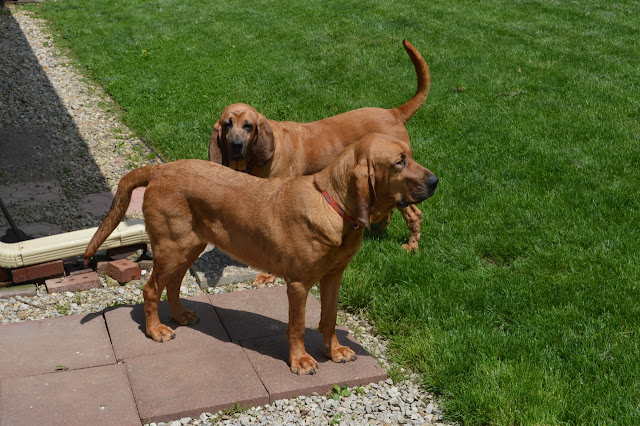 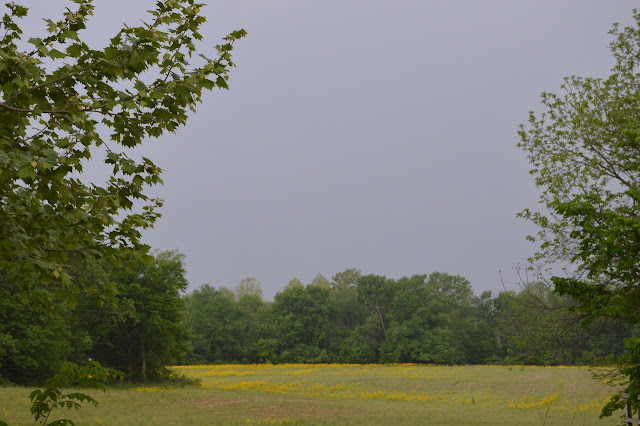 The light rain started just as we stepped outside ... Stella didn't look happy when she felt raindrops falling her her head. Sadie turned after her photo and went to the house. 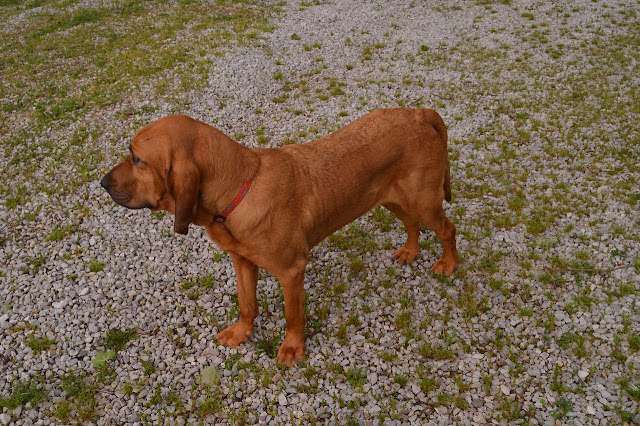 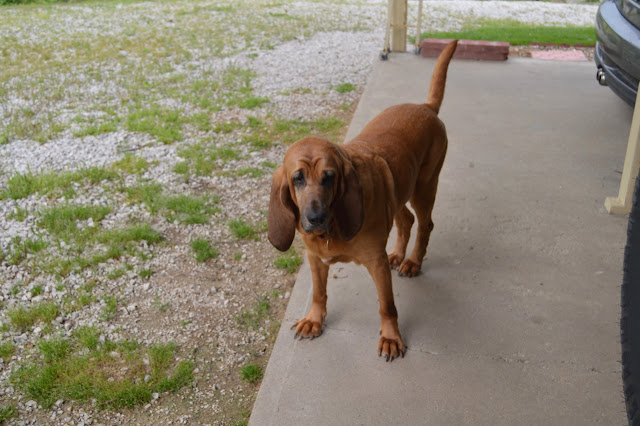 It was a little after 7pm I noticed the skies getting dark. I checked intellicast radar and saw there were some thunderstorms heading our way. So the screen windows went up and the storm windows went down for some heaving rain and strong winds from the west. 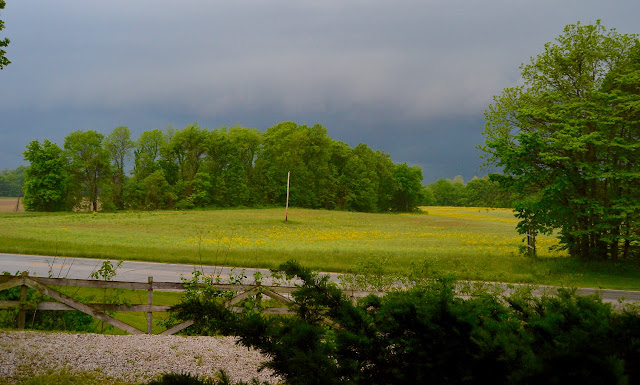 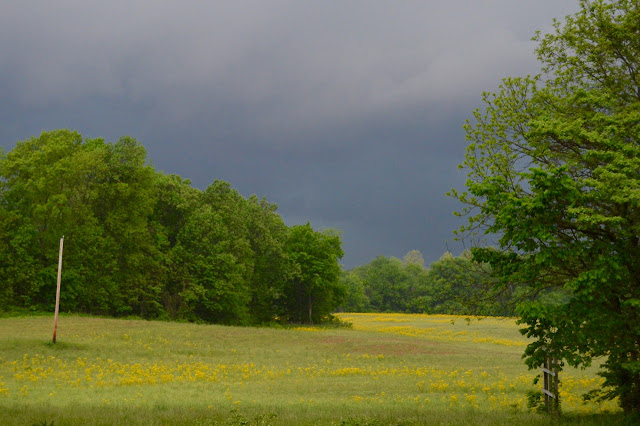 I am anxious to see if Heidi's skin improves with the multiple applications of the water/vinegar mix. It must feel good because it's the first time she had just laid still as I put on the solution. She fought me when I put any kind of creams or ointment on her, even the liquid zinc oxide last winter.

Not only is this suppose to relieve her itching but also take away the layers of the yeast infection. It says I can put it on as many times per day as I want or see that it's needed. I still like the idea of the spray bottle but being able to rub it into the skin with cotton balls may be the best way.

Just from what I have read about yeast infections, I will continue to feed her no grain food with no potatoes. I am seriously considering the salmon blend for the first time, where salmon would be the #1 protein. It is the only protein source I have not tried. She is weeks away from a new bag of Earthborn though.

It was cool temps and strong storms Wednesday night in 'the tropics' of Southern Indiana.