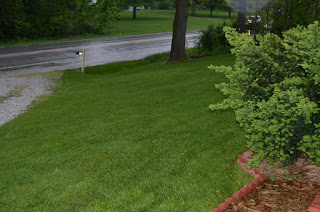 I'm not sure but early this morning, last night to me, I had three tabs open with my blog, facebook and twitter. I refreshed my blog website and my monitor fills up with a screen from my internet provider Exede!!

It was welcoming me to their internet service and had a button to click labeled 'activate service'. I've been using the service since June 2014 and practically live on the internet daily. My account was already active.

So I called the Exede customer service rep. I am not sure but I swear they work from home and the few times I've called them it sounds like I have woke them up in the middle of the night. Is that possible? They are really some of the best customer service people I have talked to.

She checked things out on her side of the desk and said all was fine. The url I gave her proved to be something that was not an Exede website. I noticed in my traffic reports this morning I had a huge number of visits from everybody's favorite country ... Russia.

It would seem they would keep focused buzzing US Navy ships instead of trying to break into a computer in 'the tropics' of Southern Indiana. So just to make sure I ran a deep scan on all my computer files with Bitfinder Anti-Virus and Malware scan. The computer was clean.

The hounds were nice enough to let me sleep until 7:55am this morning. I remember shutting down my computer around 3:20am so I had a good night of sleep. We woke up to the sound of rain. Rain that was forecasted to start this afternoon. It's good that I mowed the yard yesterday instead of waiting until this morning. 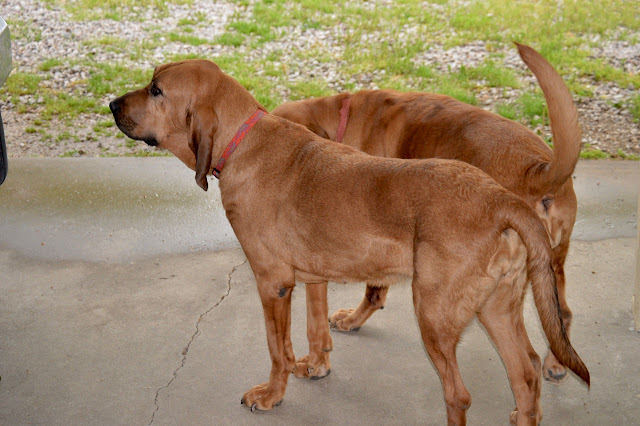 Of coarse that meant Stella would not go in the yard and decided to "hold it" until the rain stopped and she was awake. Heidi scrambled behind the Yews and Sadie tiptoed out into the yard. 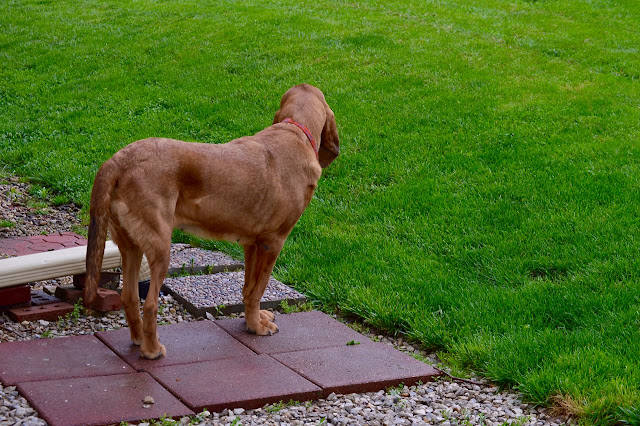 To say the least it was a pretty slow morning but nothing outside the norm of our retirement. I am beginning to think my lifestyle is turning into that of the hounds ... I'm not sure I can keep up this pace. 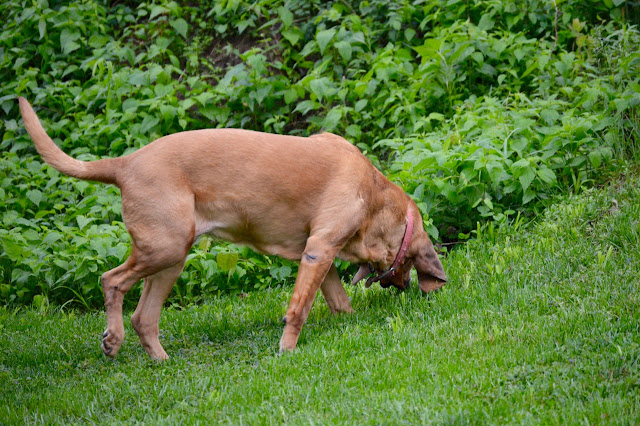 Stella as usual, is not sure if she really wants to get that wet by going in the field. She decided she didn't have to poop that bad. 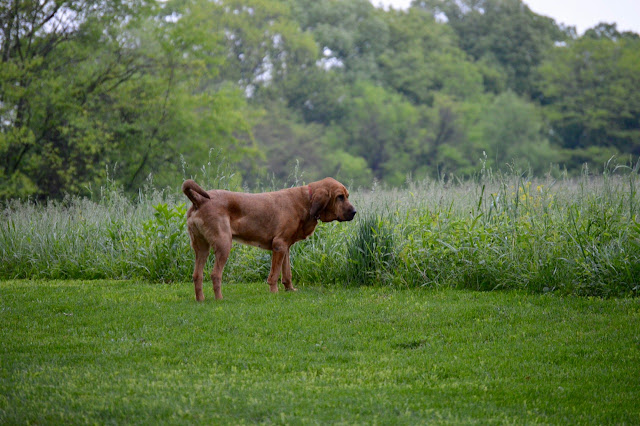 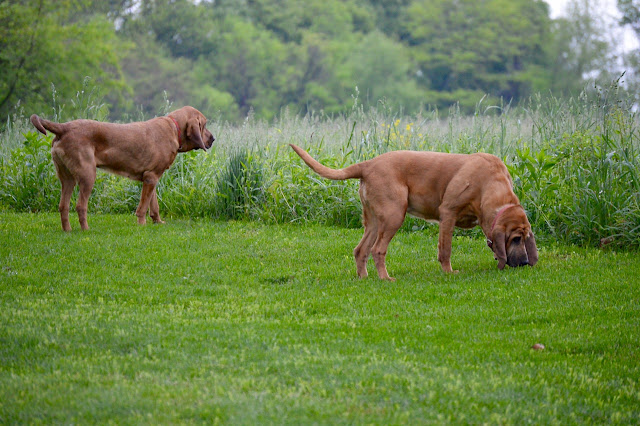 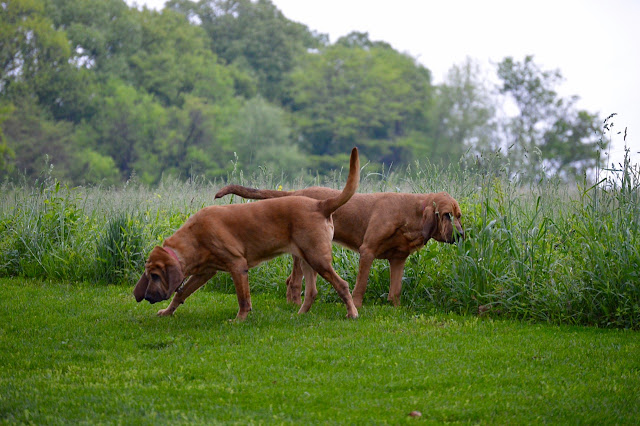 Sadie is a lot like Winston was ... nothing bothers her too much. A little rain, but she still gets in the field and will even stay out in the rain on occasion. She was anxious to get back inside the house when I turned to leave. 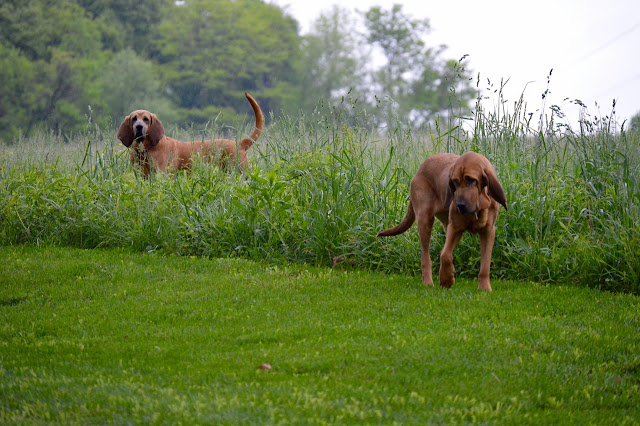 Stella loves it when it is sunny ... doesn't care for rainy days. 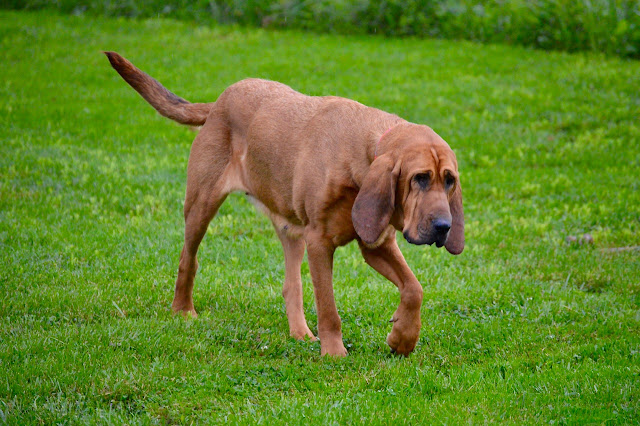 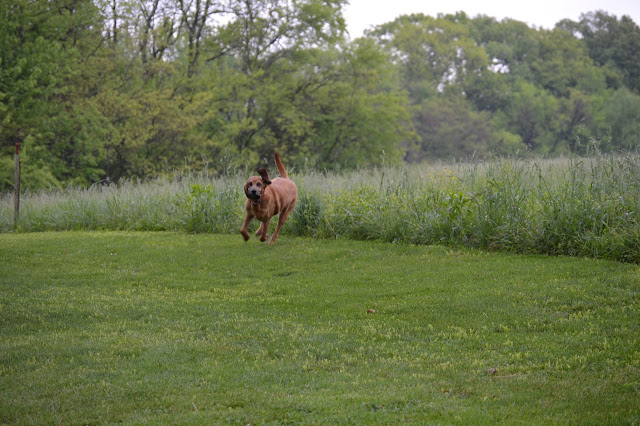 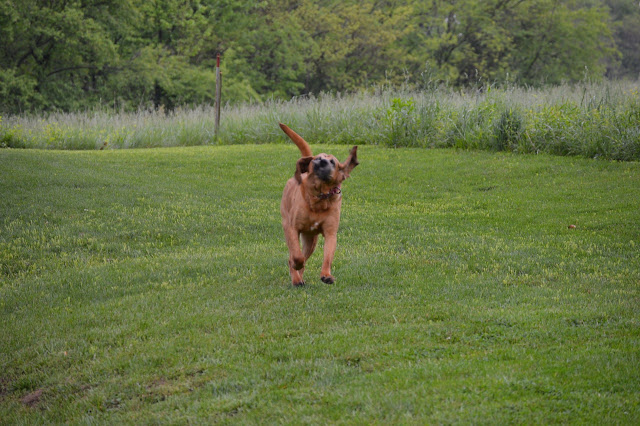 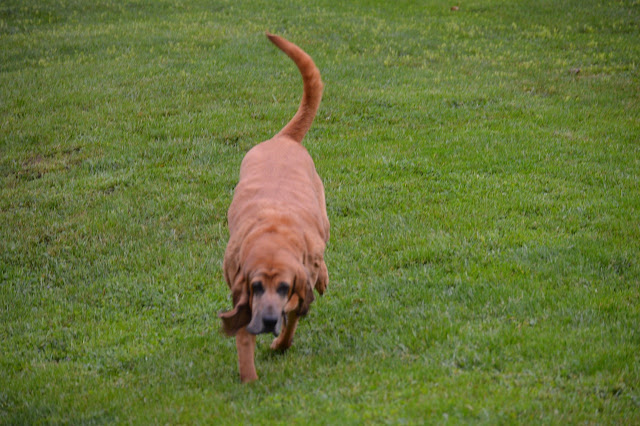 It was at least sunny after their lunch. Heidi made her only appearance of the day. Those red spots have been licked on and chewed on a lot the past two days. I am not sure why since she has only be eating dry kibble. I am almost to the point of fixing her the meat and veggies I buy for myself and taking her off dry dog food. At least that would be one more thing to check off the list of possible causes ... dry dog food additives. 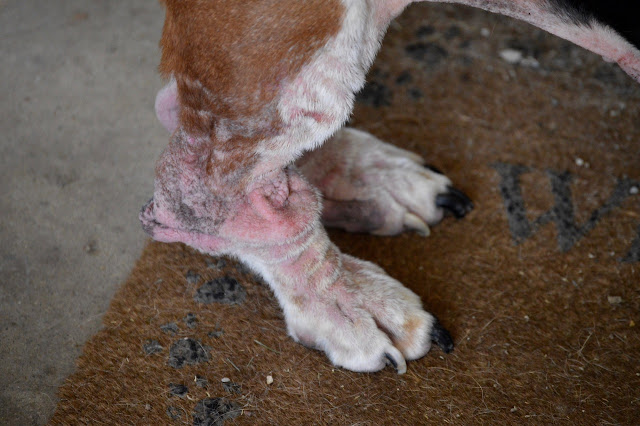 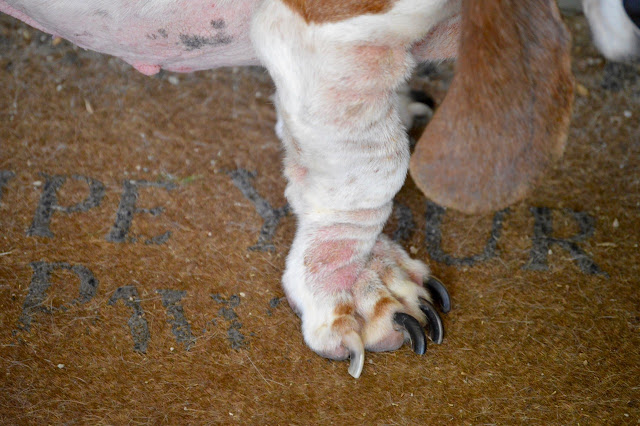 Stella and Sadie came out for only a short time after their lunch but had no interest in going anywhere. With the sunshine out I thought maybe by the afternoon the grounds would be dry enough to take an afternoon walk. 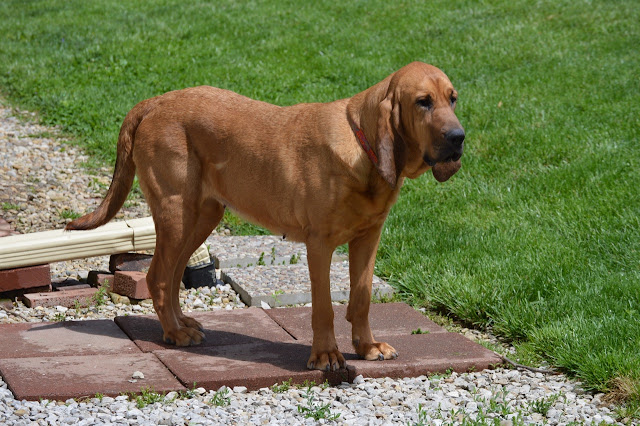 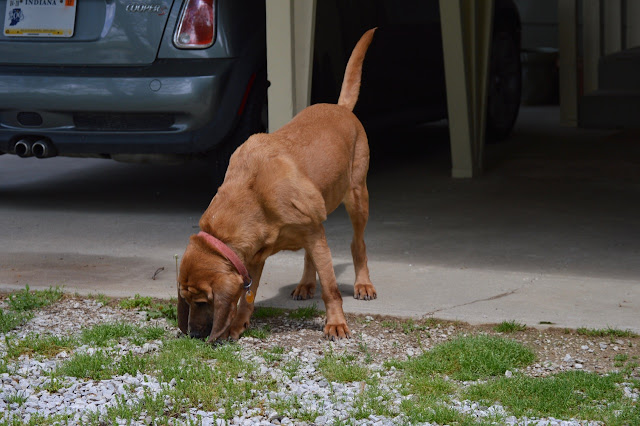 Around 12:45pm the hounds woke up from their nap and rushed to the large window barking. A rare visitor was coming up the driveway. It was the mailman which meant only one thing ... my first bag of Tim Horton's Coffee had arrived.

By 12:55pm I was sipping my first hot cup of the infamous Canadian Coffee. I liked the taste of it and now wish I had a Tim Horton's Cafe and Bake Shop nearby. Having it shipped will have to do. 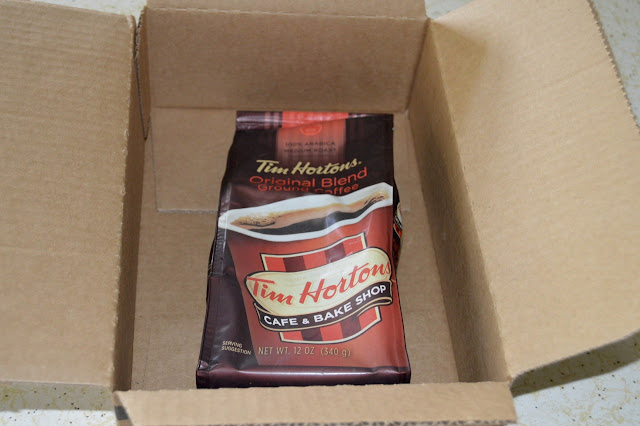 I didn't tell you what I did while enjoying those two cups of coffee ... For the first time in a very long time I went to Craig's List and other websites that had RVs for sale and looked at what was available. I know most of the crowd that visits my blog these days does not know about my obsession a few years back.

All those posts are from May 2015 on back, about 4 years worth of photos, back and forth thinking, and a lot of different options discussed.

Where I thought it was possible to travel with one bloodhound and two basset hounds last year, I am not sure it is possible with two bloodhounds and one basset hound this year. Both bloodhounds immediately jump out the back when the FJ door is open, plus they take up more room and I wouldn't have room to sleep in bad weather days if I were still tent camping.

The two times I let Stella outside and walked her close to the place we buy dog food, she was skittish, hyper, a little afraid of the traffic noise. That noise would have been no different than a gas stop or a stop at a Rest Area when traveling. She acted like she would bolt if she had the chance.

I am not getting rid of the Toyota FJ so there is not a lot of options as far as trailers. I've gone through all of those options in the past over and over so I will not bore you with the details.

There is just something about this time of year ... every year ... that I have thoughts of hitting the road. It was nice to look though different kinds of trailers and RVs with the same thoughts as I've always had.

Since it was still too wet to walk the field, Heidi refused but the Sadie and Stella were just as excited to go for a ride as they are to eat. So they jumped in the back of the FJ and I grabbed my camera. There was only one problem I found after getting a few miles from home. The camera battery was too low to take photos.

We still took a ride out to the country then finished by driving some streets in town I had never been on since living here so many years. I saw some pretty nice neighborhoods that I never knew existed.

After spending most of the day looking at RVs and Trailers, reading news and sports ... before I knew it the time was past 3:30pm and the hounds were restless. I decided unless water came over the top of my shoes ... we were going on a walk. The sky was beautiful and that morning forecast of thunderstorms by 3:15pm today looked like a totally missed prediction. 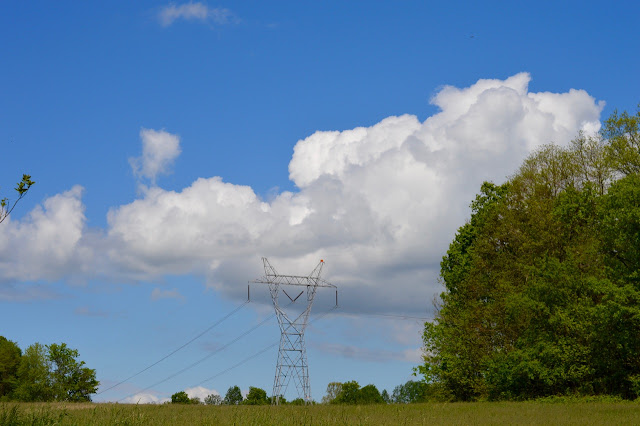 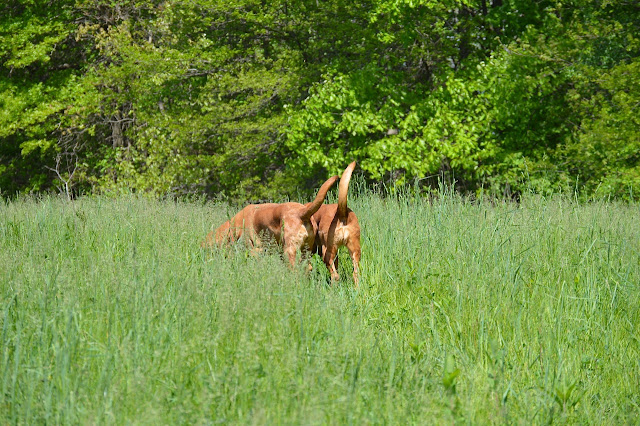 Whey they both took off this fast I was sure there must be deer up around that corner. I was already preparing myself for the long walk to find them. 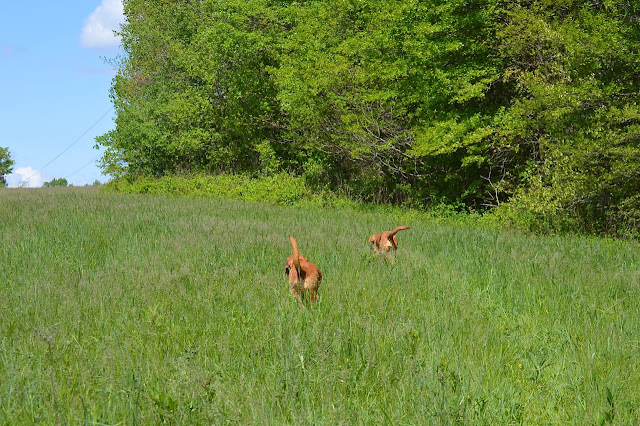 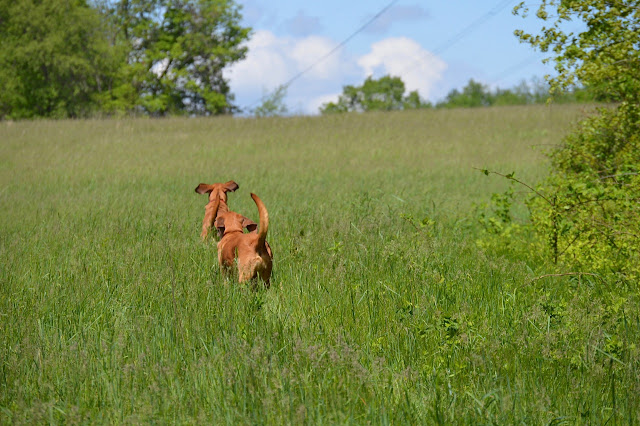 When they both look like this it seems almost certain deer is in the area but today that wasn't the case. They searched, sniffed the air but came up empty today for any deer to chase. 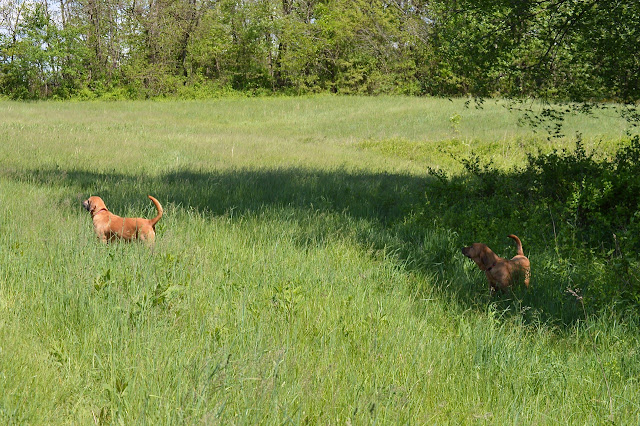 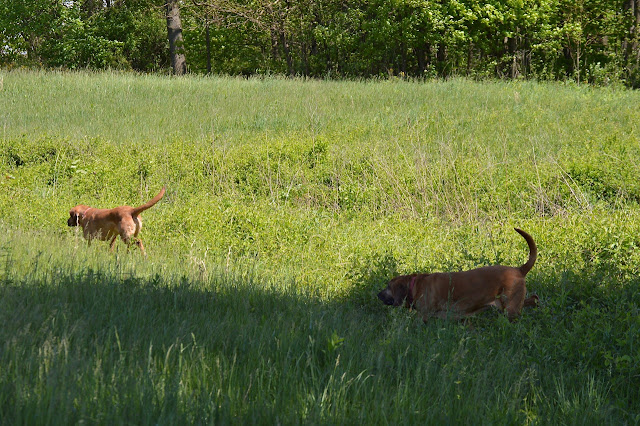 Stella had just stepped into the wooded area when I yelled her name ... she came running. She has always been pretty good coming when called. 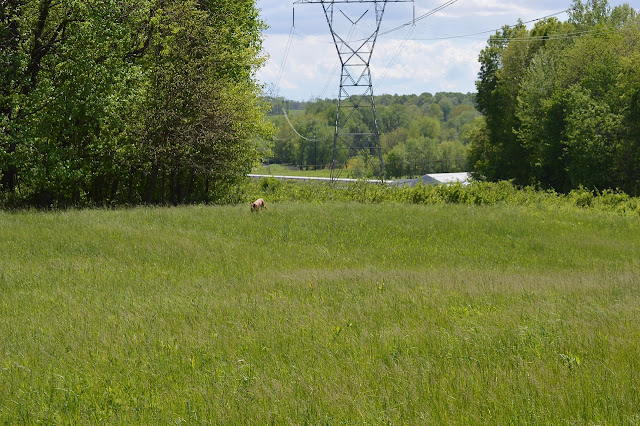 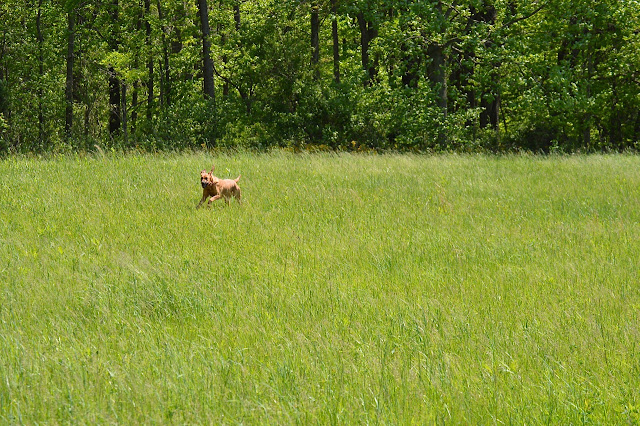 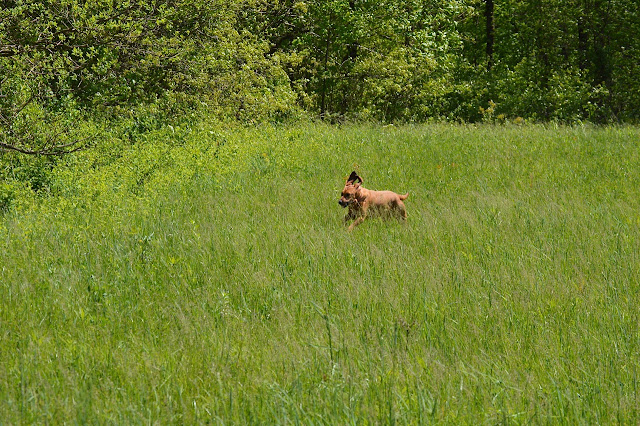 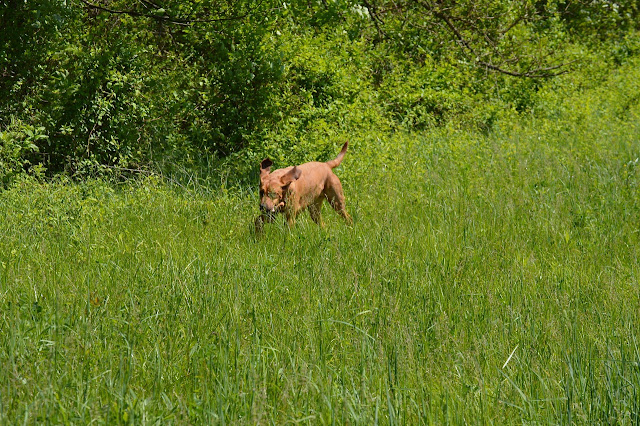 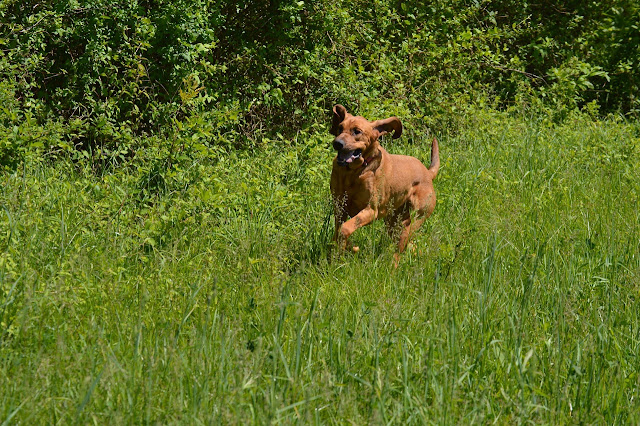 Their noses always keep my on my toes, not knowing if they have locked into something they are going to chase. If I were traveling with these two they would be on leashes at all times. For some reason I don't feel that is fair to them. 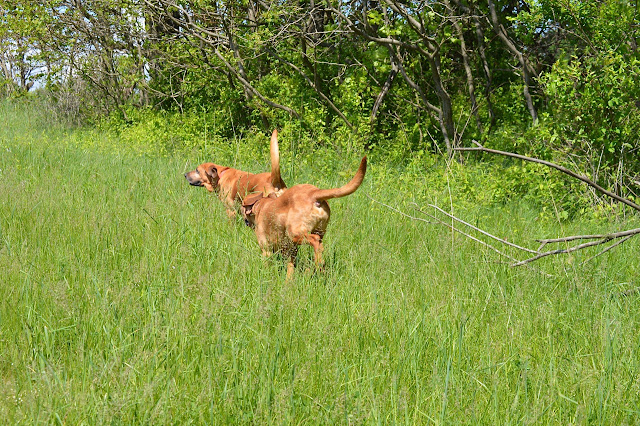 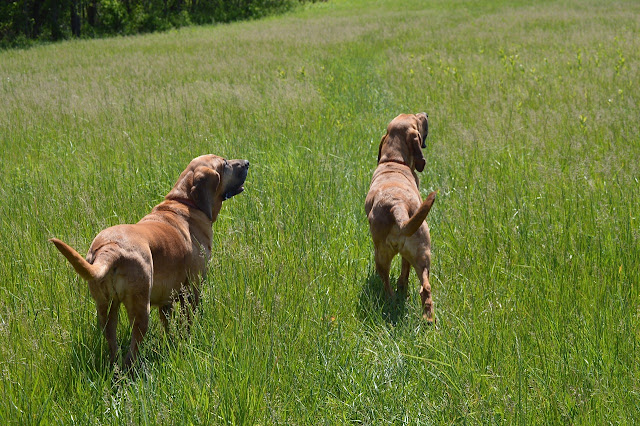 Well I am heading back to look at RV sites, and I may even visit some forums which I have not done in many many months. Maybe a short day trip is in our future.

The rain is gone and was beautiful here in 'the tropics' of Southern Indiana today.