With house rules stating that after April 1st, clothing will be t-shirts and cargo shorts, it's days like today where there is a temporary bending of that rule and a sweatshirt is allowed to be worn. Why? 52° at 2pm is why. How the weather experts said it would be mid 60's today, makes me wonder if I should come out of retirement for part-time work.
I'll get to the new blogs I found today, and other stuff I did today but first a short story on how my two bloodhounds are different. They look the same in color but that is about the only thing they share in common ... except sleep and eating.
Some of those differences are ... Stella will not fetch a bone, Sadie loves it. Stella can and will open doors to go outside, Sadie will wait for me to open the door for her. I found out just today that Sadie will not touch a banana but Stella will gobble it down as fast as possible the first time I turned my head and wasn't looking. Stella will howl for food while Sadie will give you "the stare" for me to feed her. They are great friends though.
When I realized it was still too wet for a walk in the fields, I just wasn't in the mood to have soaked shoes and cool temps combined ... it was time to play fetch with Sadie. As you can tell she was really excited (joke) as she saw me walking out with my camera and her bright orange bone. 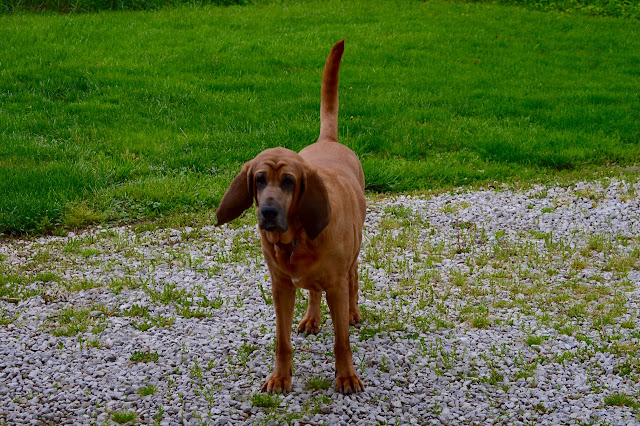 She started off well but just like me she has a very very short attention span. It wasn't more than a two or three runs that she went into her pose that tells me "come and get it" ...I held out until she brought it back to me. 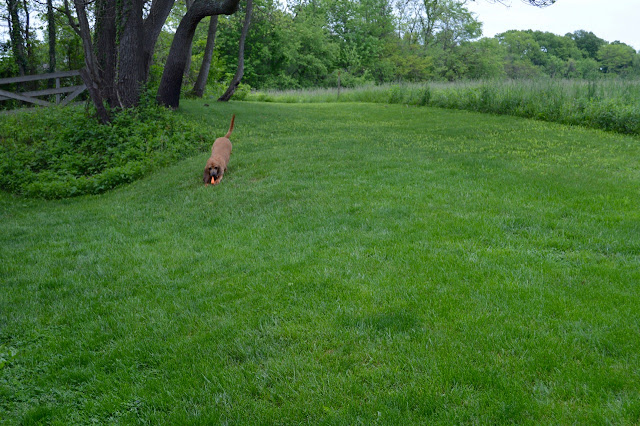 Whoever thought a bloodhound would love to play fetch? She has since she was a puppy in 2008. 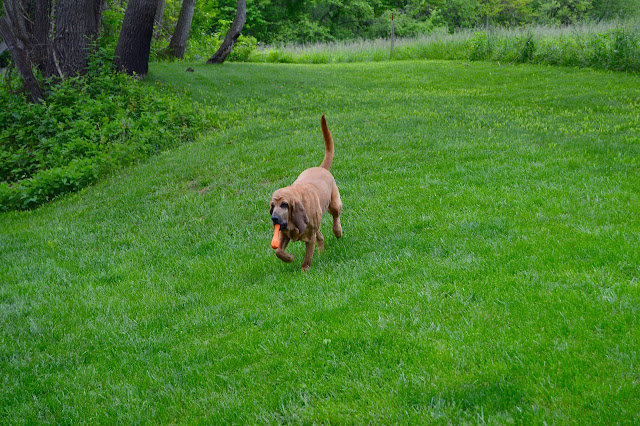 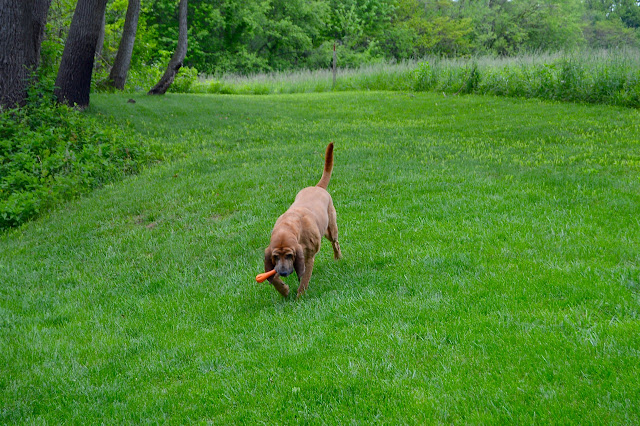 This is the pose I was telling you about. Yes, you have seen it before, it very similar to the pose she has when she is demanding a walk in the field. 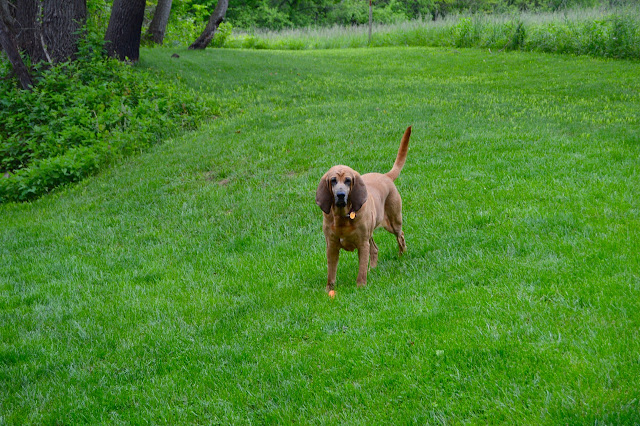 I held out though and then when she laid the bone at my feet, I threw it the opposite direction. As you can see, Stella doesn't like playing fetch, unless it's a frisbee. 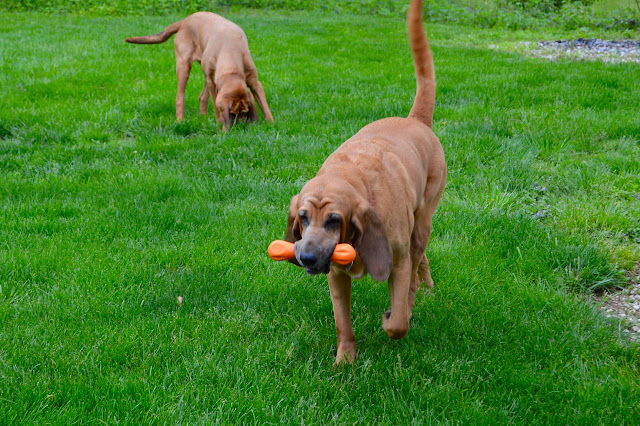 The last toss to the left proved to be the last of the day. She lost her attention, found a different smell, focused on that and headed for the house ... without the bone. 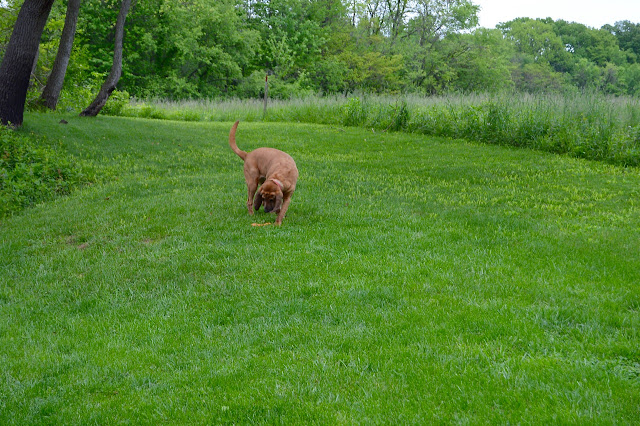 Stella was still hot and heavy on a scent she had picked up underground. Maybe a yard mole track since they don't operate I'm told until 7pm or 7am. Luckily Stella is not into digging holes or craters trying to capture moles. 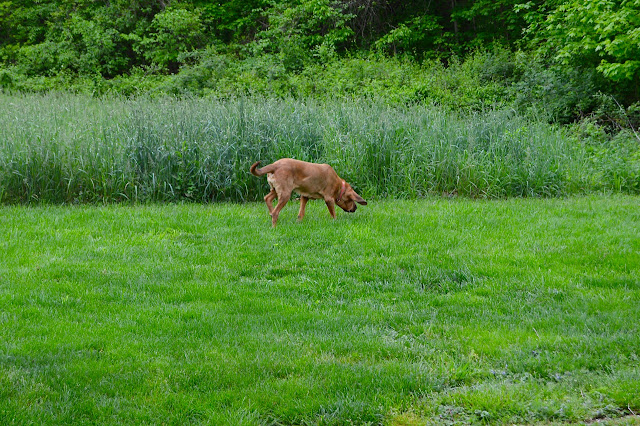 It was late this morning as I was finishing all my online reading and a cup of coffee. I was about to log off the computer and get up when a blog on someone's blog sidebar caught my glance ... "Encinitas" was the title. I had to click it since that was my old neighborhood from 1977 to 1984. Before I could even finish reading the first post, click here, I decided to start reading their blog from the beginning.

It wasn't soon after I started that with more coffee that I saw they had visited and stayed in other areas I had lived over the last 40 years. Those being the Pacific Northwest and around the area of Dillon Lake, Breckenridge Colorado. Needless to say the mind was flooded with old memories as I read and looked at their photos.

It's a great blog to take a look at. It has an interesting story along with great photos, plus a few places that you don't see on other travel blogs. The blog has been added to my sidebar and it's name is Trekking With The Bs.

Of course that blog had one listed on it's sidebar that looked interesting. After opening it up I had seen it years ago and through all of my blog changes I had lost their link. Today I saw they had 24 posts on the topic "Indiana". She had taken some photos of buildings that I have seen multiple times and a few places I'd been to before I started blogging in 2011. Like one does sometimes when it's local ... you take places or buildings for granted when others see the beauty in them. I need to get out more without the hounds.

When the weather is not optimum sometimes it means more time for book reading, online reading or doing stuff on the computer with spreadsheets or changing the blog design. I am still not finished with my template design although I have decided again that the current fonts, the crimson and white color combination is what I like. I would like some separation between the posting area and the sidebars.

I don't have the programming knowledge in how to draw a thin single vertical line between the sidebars and posting area. I assume I could do that in Blogger under their css section of the template adjustments. I see other templates that has each of those in their individual section. I'll am going to take a look at those templates, replace it with my fonts and colors and see if I can some up with something that works.

So I've played around this afternoon with that. It's still a work in progress.

Heidi really has me stumped today. Just a few days ago I thought I was seeing progress in her terrible skin issue. Then it exploded a few nights ago. Nothing had changed in her diet, bedding or activity ... it just went nuts with redness and chewed hot spots.

This morning her skin was so bad that as soon as I started to pet her, she rolled over on her back so I could see how bad her skin looked on her stomach, legs, paws and armpits. She had a bath a couple of days ago so shampoo might be the cause although it has been used before with great results. I think today it will be a 20 minute soak with Epsom Salts, a cold water rinse and a night off from the ointment to see what tomorrow brings.

Thanks to the people that commented or emailed me their thoughts on my blog changes. The feedback helps in what needs to be done.

It's football weather in May, here in 'the tropics' of Southern Indiana today.