When Sadie and Stella saw me pull the FJ out into the drive, they came sprinting from the field thinking we were going somewhere. We did but not until later. They have become addicted to riding in the FJ, the distance does not matter. 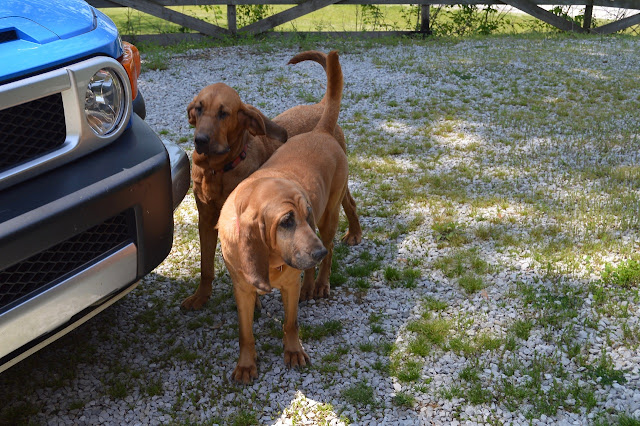 Heidi went to the door a little early today wanting outside. She will do that when she has to relieve herself but today she just wanted to wander around the yard. Her rear hocks looked fairly good today, stomach was a little red and her neck was a mess. She got a bath later in the afternoon. 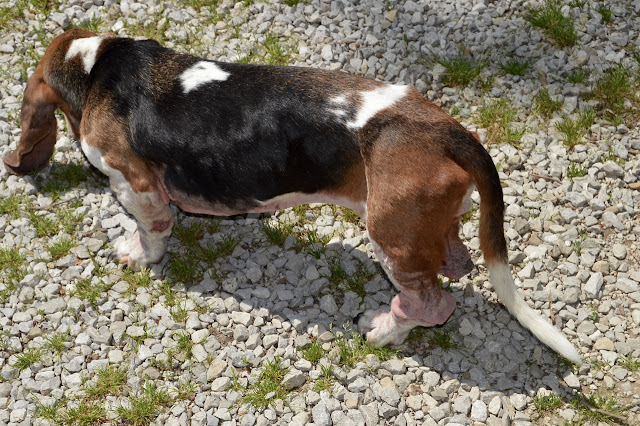 I needed to do two things for a little house maintenance before the next storms blow in, forecast says on Tuesday. While on the roof I wanted to inspect because of the hail storm we had last month. This roof is on it's last legs so to speak and has been through a lot of storms, wind, snow and ice. I also needed to clean out any leaves and sticks that was blocking the flow of water in the gutters.

Stella took her normal supervisory position. Since she was in charge, Sadie decided the field was all hers. 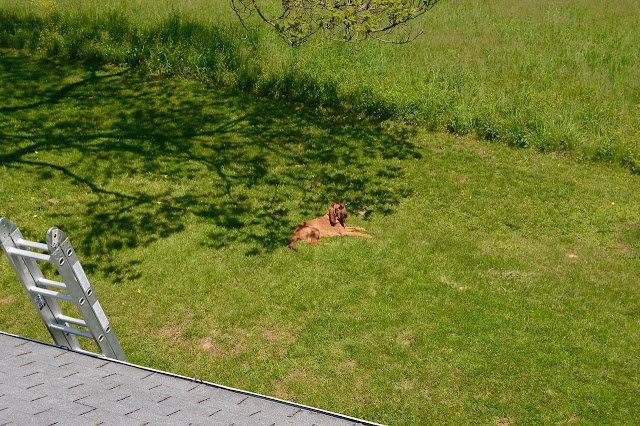 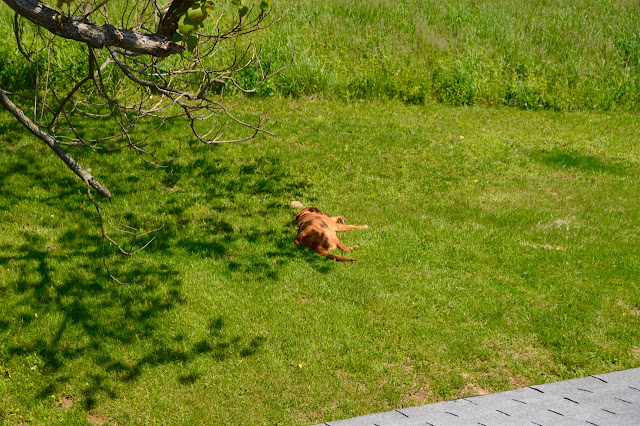 My roof isn't really high nor steep. You do have to pay attention though. I love the views from being on the roof. The hounds look a long was off from that rooftop angle. 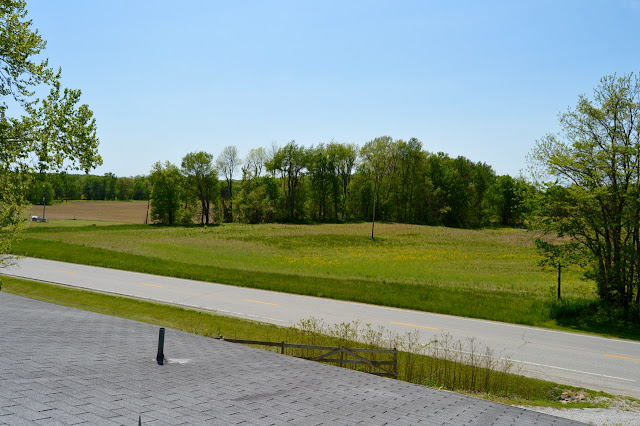 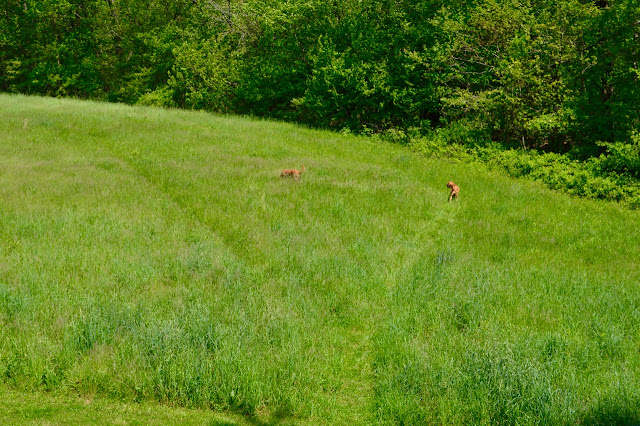 I saw some hail damage to the shingles. Nothing major but more than I had last year at this time. The wind had tore a couple of pieces off in the last storm. I have a package of shingles left over from the repair in 2008 after the tree top feel on the corner of the house. I got to the point of replacing a sheet (3 shingles) but couldn't find my roofing nails.

So the hounds got their FJ ride for the day. Total mileage was two miles round trip. I grabbed just a small handful and knew they were priced by the pound. The scale showed an 1/8 of a pound. Here is when the fun started. It's one of those @$&%$^ moments.

She yelled at the manager asking for help. I was pretty sure that .12 would work. The manager and I were on the same page and it's what my receipt shows also. It does make you wonder though what's being taught in schools anymore ... or maybe math just came easy for me.

Once the house maintenance was finished and all the tools were put up ... the hounds needed a walk. They slept this morning so there was only one walk this afternoon. 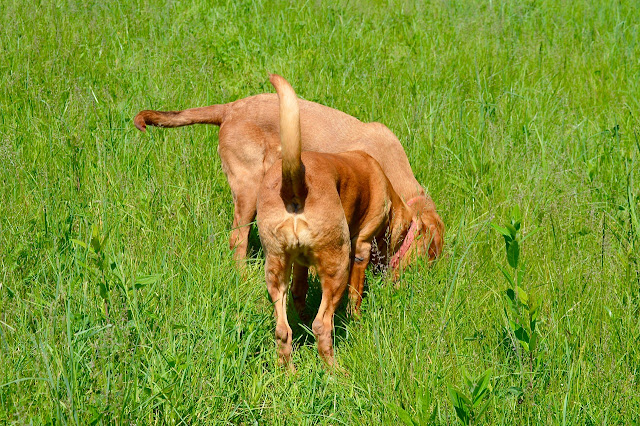 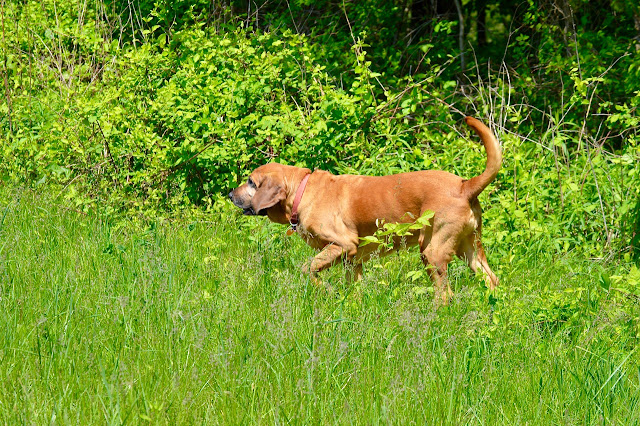 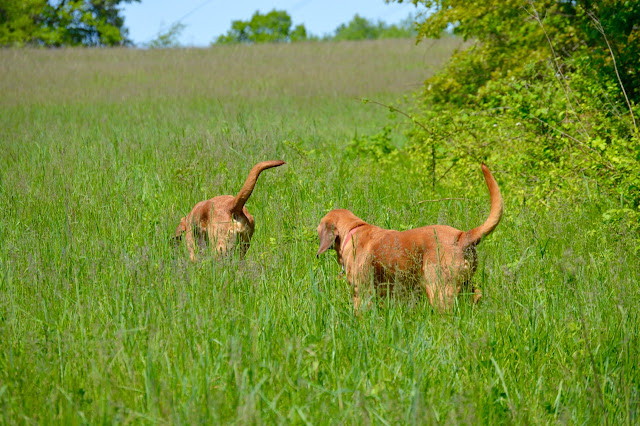 When they took off I was preparing myself that they would be chasing something and would be out of sight by the time I made the turn around that first corner. 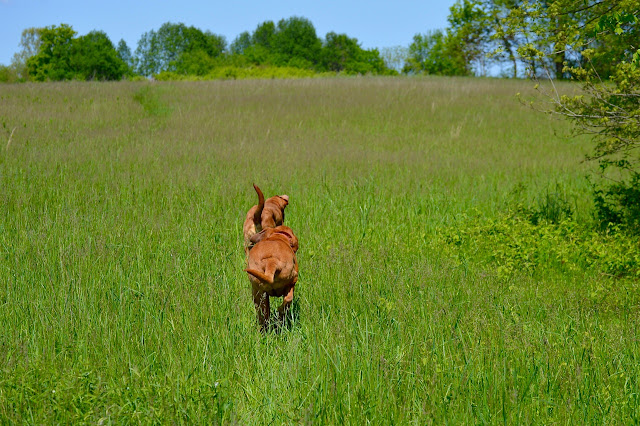 They both sprinted for Stella's corner and no doubt there were fresh deer scent by the way they acted. It was also a day where Stella was going to ignore any calls that had her name and would come running only when SHE was ready to. 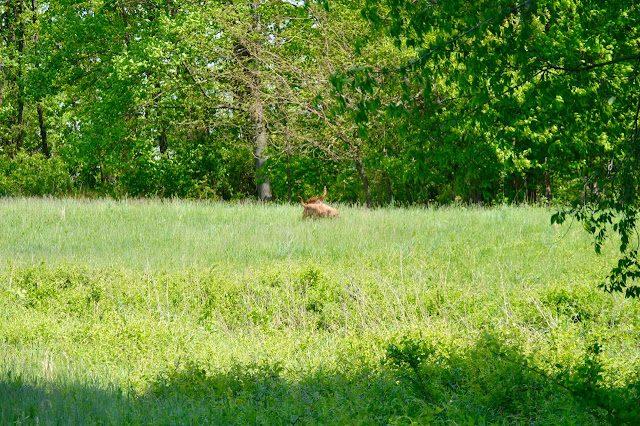 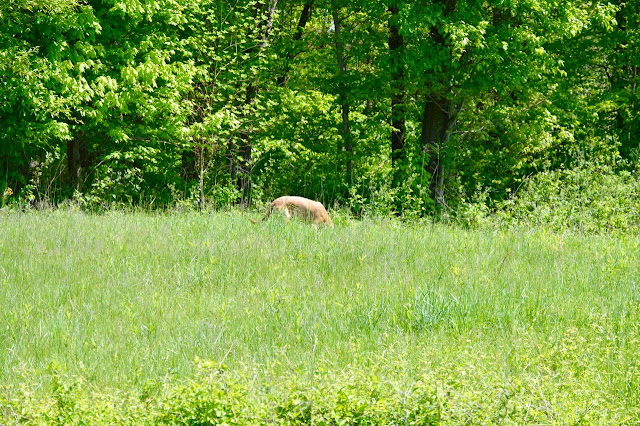 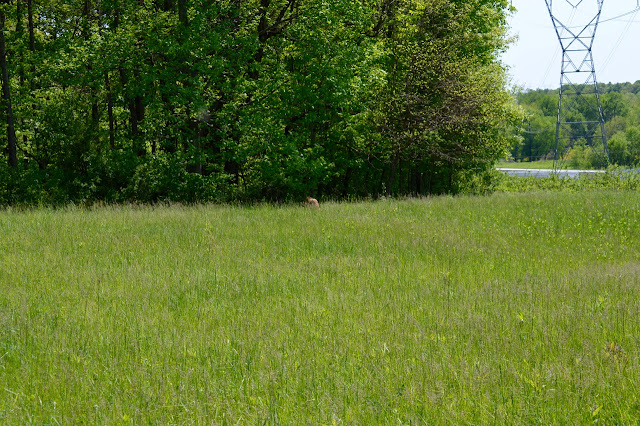 I like the color of these next to photos hidden in 7 acres of green. 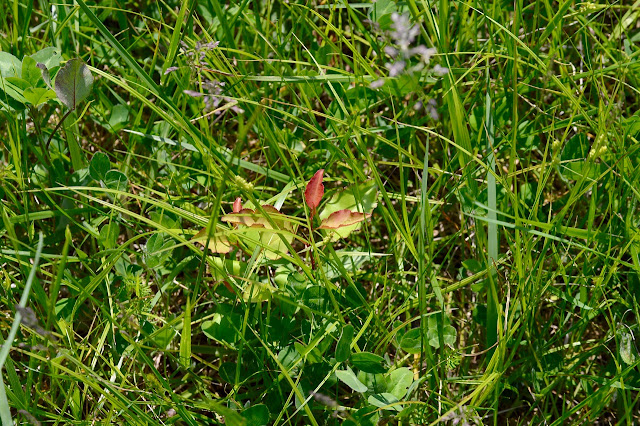 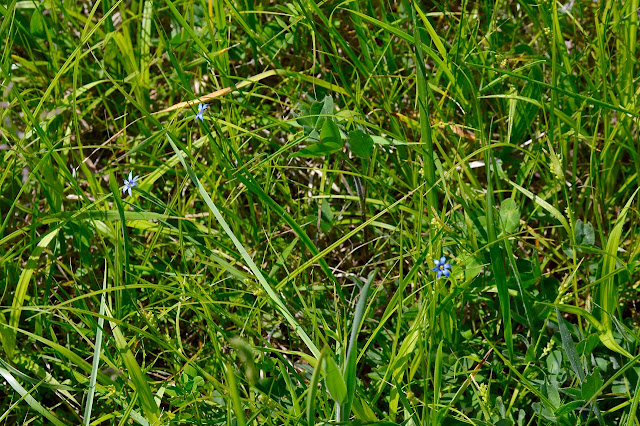 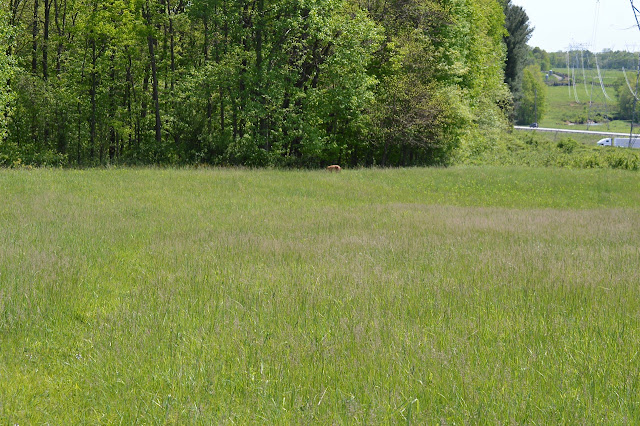 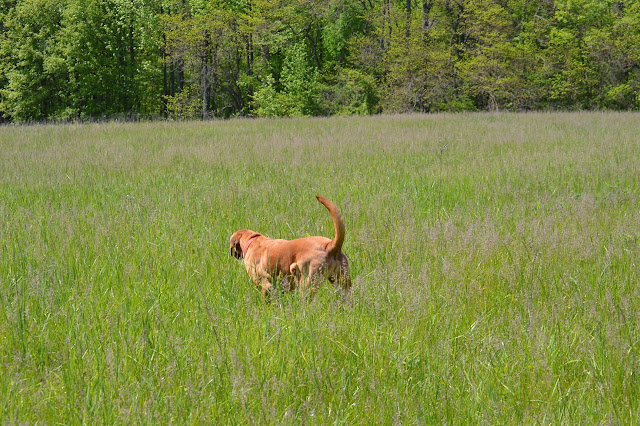 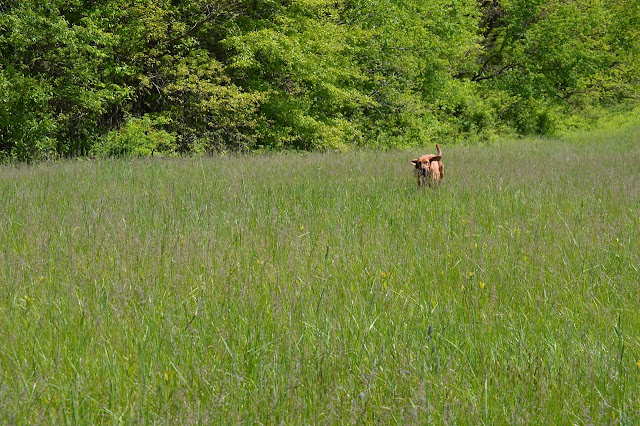 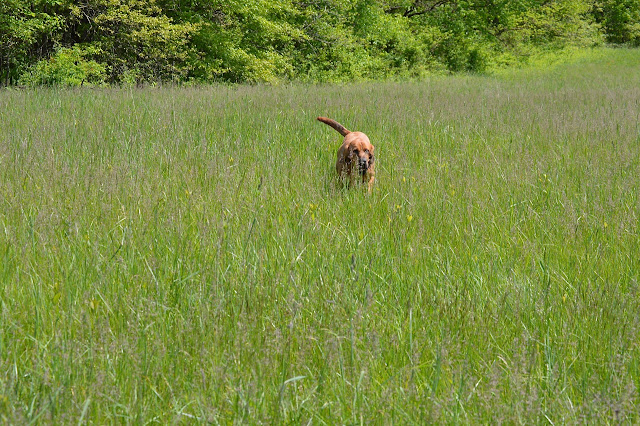 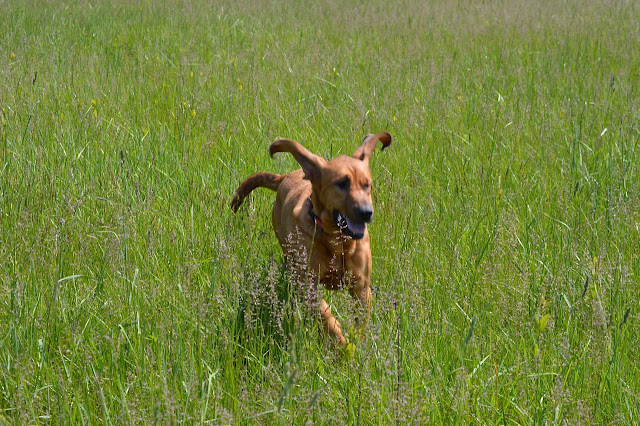 Even though it was warm outside but not really hot, Sadie still was in a hurry to get back inside the house. It was shaded and cool inside, just the perfect temperature for her afternoon siesta. All of them have been sleeping all afternoon. 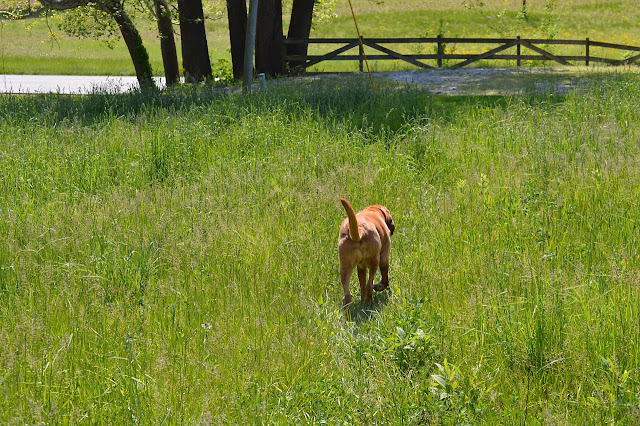 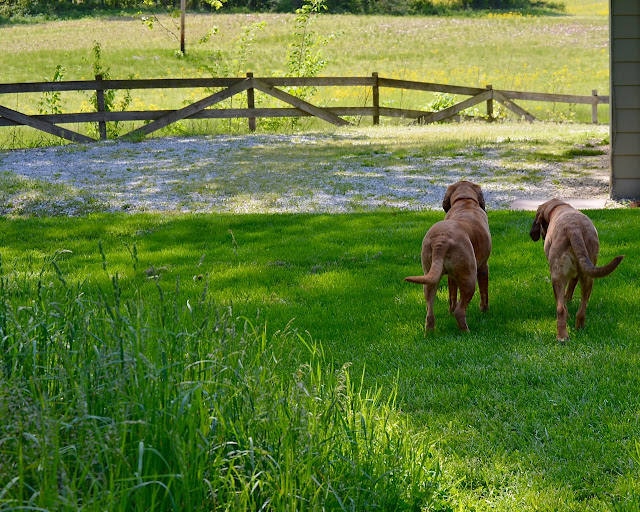 I joke to friends that I only do one thing a day but today I did two ... repaired the shingles and cleared the leaves and sticks out of the gutter so they will work as designed. I clean them out every fall after all the leaves have fallen off the trees. It never fails they come from somewhere over the winter months.

I hope to wash the Mini Cooper tomorrow. I want to get it nice and shinny before it rains.

It was a good day in 'the tropics' of Southern Indiana today. No ticks on either dog ... NexGard works very well.