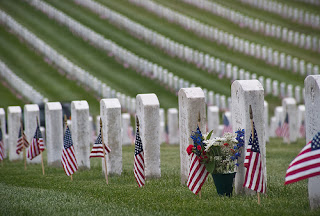 I decided to ramble a little bit about Memorial Day weekend, my newly purchased Z4, and Heidi.

When you hear Memorial Day Weekend you instantly think of parades, family barbecues, maybe water skiing at the lake or traveling.

Growing up I was never interested in parades or carnivals. Although now, I do remember riding my red, white and blue decorated Schwinn one speed bike in the town Independence Day parade a couple times but that was under a strong parent suggestion.

Yet 99.9% of the time during each holiday I'm more of a hermit. I usually stay away from the holiday crowds, not interested in parades or carnivals, so this holiday weekend will be like most others ... probably put something on the grill a few times, catch parts of baseball games, a couple of walks for the hounds, maybe even a siesta fit in around some book reading ... basically like any other day in retirement.

Except ... I'll remember those that gave their lives up for our freedom, which is really what this holiday weekend is for. Still the parades and memorials are great for those people that enjoy them and it's good to see them attend.

I will sit and watch the 100th running of the Indy500 on Sunday ... even it starts raining and the race is stopped ... I'll wait it out. Many years ago I spent more than a few days sitting in the stands at the track waiting for the rain to pass and the track to dry out enough for qualifications and/or practise. So I will stayed tuned in through all of it, even if they have to come back and finish the race or even start the race on Monday. 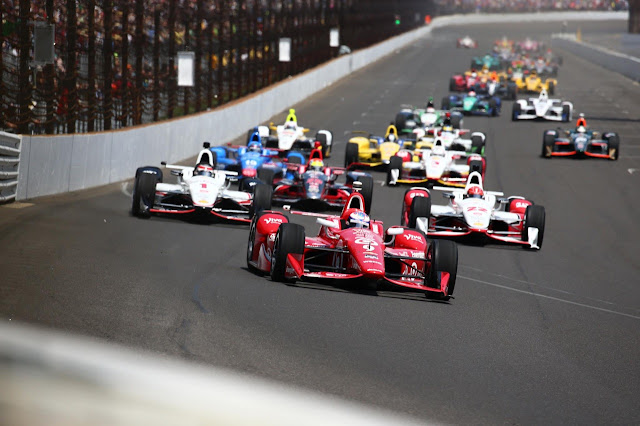 I do this on occasion and for some reason the word "rambling" in the title will bring more readers to the blog than most other days. With other popular titles having deer chases or Stella's anxiety damage, all the other blog subjects have about the same number of visits.

Looking through the blog traffic stats that Blogger provides, it's rare to see anyone that has clicked back through the archives to read how this blogging madness started. I am not sure if anyone clicks on the labels "topics" where I have way too many listed. They could find the same information with past posts if they typed in their subject in the search box in the upper right corner.

For the most part, readers are reading only the posts of the past week or most of them are looking at only the hound photos ... that's the popular way.

It's one of those times, with the skies overcast, the lawn is mowed, my house work is done ... I have more books to read, but the urge is there to do a little redesigning of the blog ... the template will stay the same, the fonts will stay the same but I might take off the "topics" section. Maybe I'll add a couple of new gadgets that Blogger has available. I like the archives because I can go back to certain periods of time and see what I was doing or thinking, so the "archives" will stay.

Hard to believe it's Memorial Day Weekend and the month of May is gone. Granted we have not has as much rain as those poor people in the Houston Texas area this calendar year but we have had over 19" so far and the year is not half over. Statistics show that 24% of that rain has come during the month of May. Does that mean a dry summer?

People ask about Heidi, her skin, where is she, why don't you take as many photos of her as the bloodhounds, etc .... Well, she sleeps a lot, she has always loved sleep from the first day I got her from basset rescue. During the winter it's too cold for her and during the summer it's too hot for her ... her standards, not mine. I let her do whatever she wants ... so a lot of times that means few photos of her.

Her skin is getting better. The water vinegar mixture is working. The elephant skin under her neck is fighting hard to stay but below her ears that skin has become soft and is getting back to the normal texture of being smooth skin.

Heidi is okay and doing fine. I need to get her over to the vet to use their scales because she looks and feels like she has gained some weight.

I mentioned the other day I'd write about my new toy, the 2003 Z4 3.0i. I haven't had the urge to trade cars, in fact I wasn't even thinking of trading cars but recently I had been thinking of getting rid of the Mini Cooper. I thought with the warmer weather I might be able to sell it. The past two summers proved that would probably not happen. I will admit though, once I decided  a year or so ago, that I was not traveling full-time and was going to hang out here at the house until the number of hounds decreased naturally ... I thought more and more about the Z4 I sold on an impulse during the time I was in the downsizing mode with plans to travel. I missed driving that car and liked it better than the Mini Cooper S.

It will only be driven in good dry weather. I might get stuck in a rain sometime but it will not be an all-weather type of car. It will be there when I have the urge to drive a sports car, much like people that have motorcycles I guess, where they have the urge to experience the fresh open air at speed. 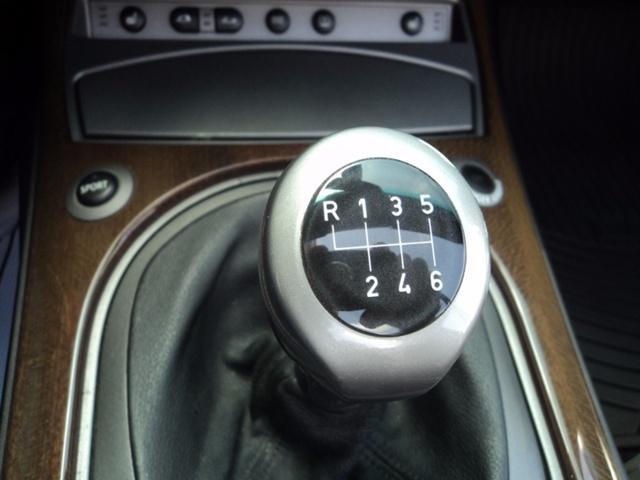 I really got lucky when I bought this car. That might change because it is a used car and anything can happen as they get older but I like my chances based on the history of the car I was able to come up with a few days ago.

It had a 'clean' CarFax, one owner for life of the car ... 13 years. The CarFax report showed two BMW dealerships where maintenance was done and one of those was listed right before the car was sent to an auto auction. They were not going to keep a 13 year old car on their lot for sale, even in the used cars section.

So I called the two dealerships and only needed to send them my Bill of Sale to prove I was the owner and not a prospective buyer. Once I gave them the last 7-8 digits of the VIN ... the skies opened up with a lot of good information. Detailed information.

The previous owner was a BMW employee. The car was always serviced at BMW facilities per the maintenance schedule. The correct oil was used all the time and from that it would be safe to say the correct grade of gasoline was used also. 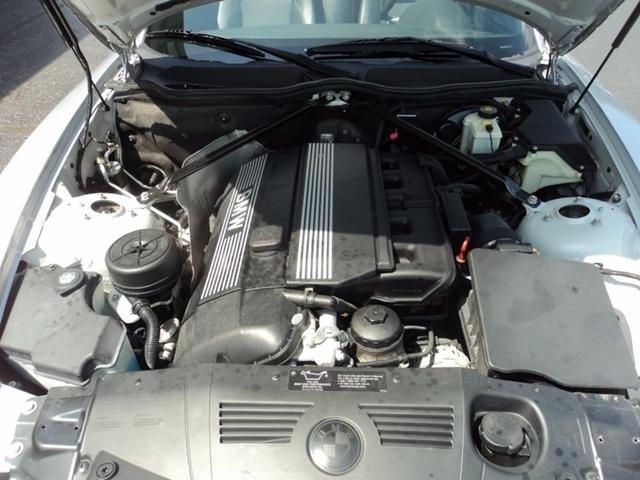 So besides being lucky in that regard and that is very lucky in my eyes. I found that right before the release for auction, they made a lot of repairs not due to damage but due to get getting old ... replacing the old with the new.

The list of parts replaced ranged from new front and rear brakes, new belts, a lower radiator hose and sensor replaced, that oil gasket that always wears out due to age was replaced, and they replaced a leaking valve cover.

All the scheduled maintenance inspections had been done. The original tires lasted a little over 55,000 miles and new ones were installed. With that installation they performed a 4 wheel alignment. Until I looked on TireRack site, I didn't know that on this model with the 18" wheels, the tire sizes were different for the front and rear tires. The 18" wheels were an option and not added as after market. 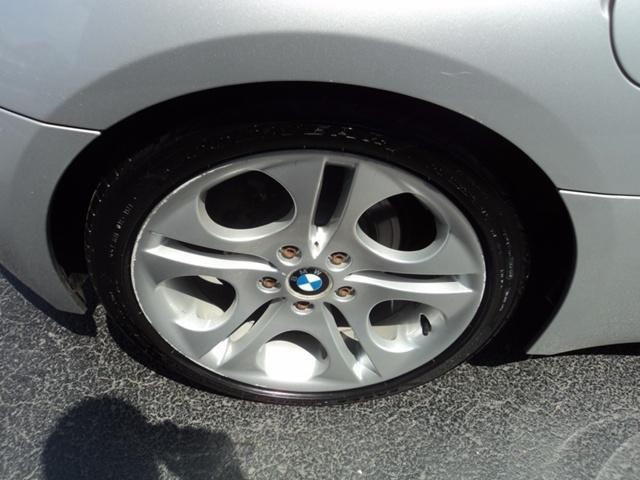 Sure, there is some normal wear on a 13 year old car, a spot or two where some touchup paint is needed or a plastic interior piece could be replaced ... but the car runs as quiet as a new one. It has power when you need it or want to try it and it's not 'beat up' under the car that is full of plastic skid plates for aerodynamics.

One thing I want to do and am still trying to decided what will take place for this to look like a clean trunk yet at the lowest cost possible at the auto bodyshop ... I want to take off these two brackets that hold the luggage rack. They are simple to take off but will leave holes. 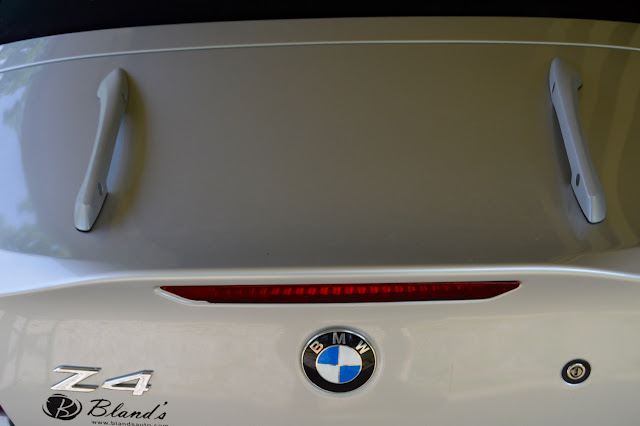 The "Blands" decal was removed days ago with a little soapy water and a heat gun ... then peeled off easily.

The funny part about this next photo showing what those two brackets were for ... the luggage rack is on backwards. That lip should be on the opposite end to prevent any luggage sliding off the car. 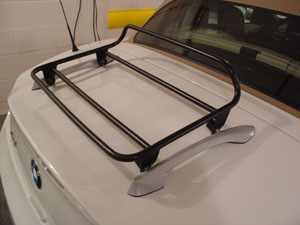 It will be a great 2nd car and for the amount of miles I will drive it, it should last a very very long time.

Today's drive will be longer today, it's one of my favorites, down through a National Forest area in the hills and hollers of Southern Indiana. Stella has a chance to be a real hero today since I will be leaving her for about two hours.

Remembering what Memorial Day means here in 'the tropics' of Southern Indiana.

at May 29, 2016
Email ThisBlogThis!Share to TwitterShare to FacebookShare to Pinterest
Labels: 2003 BMW Z4 3.0i, Memorial Day, Rambling