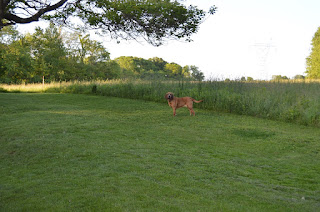 I guess the hounds will decided when I am finished blogging for the day, not me.

It started with Stella howling and acting like I had never seen her. I thought she had hurt herself someway. Since it was way after her lunch and not even close to breakfast,  I didn't know why she was howling. I had really not seen her like this during this time of day. Their water bowl was full. I was a little confused what she was trying to tell me.

By the time I came back to the desk with a glass of water in hand, she was laying by my chair asleep. Sadie was in her spot along the living room wall where Winston spent his last days resting. So I continued to read some things on the internet.

It was getting cold enough to get up and shut all the windows but it looked really nice outside. I changed my camera lens to the 18mm-55mm and out we went. Right off the bat, Sadie is give me "the look" ... that look she gives when she wants to go on a walk, not just roam the yard. 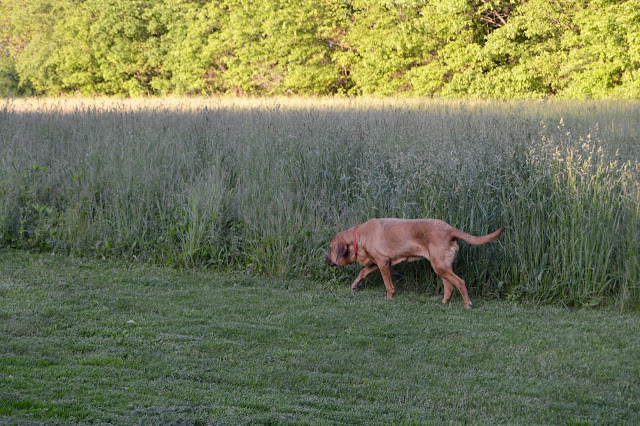 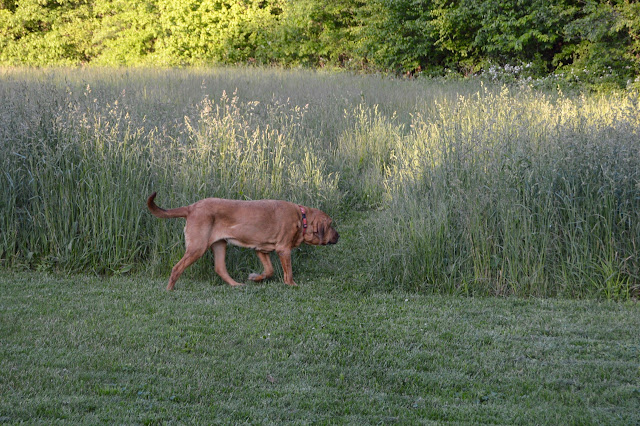 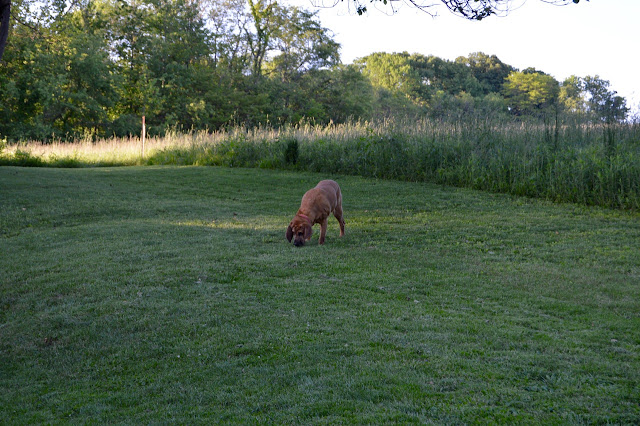 So off we went for a early evening walk, it was close to 8pm. I could tell the lighting for taking photos seemed to be much better this time of day than the afternoons or late mornings. That will be something to remember, maybe we need to take the 2nd walk later in the day. 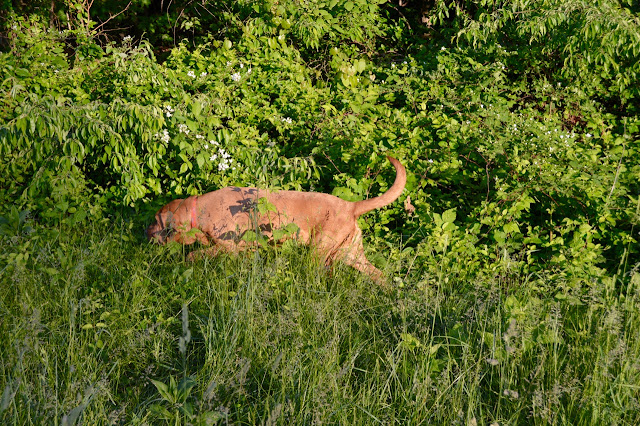 All of the recent rains have really changed the growth of the field these past couple of weeks. The farmer should get a lot of good hay when they cut and bale it in late June or early July. 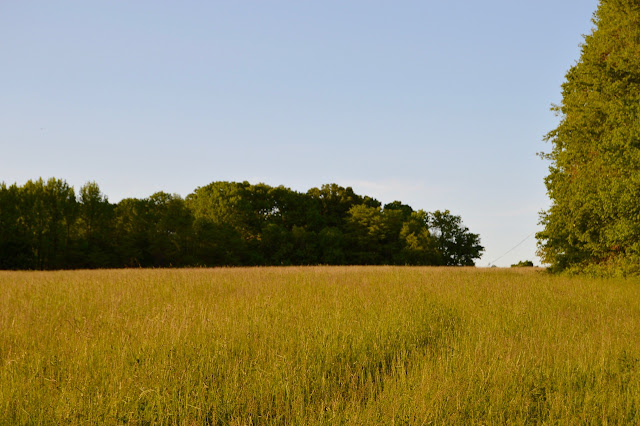 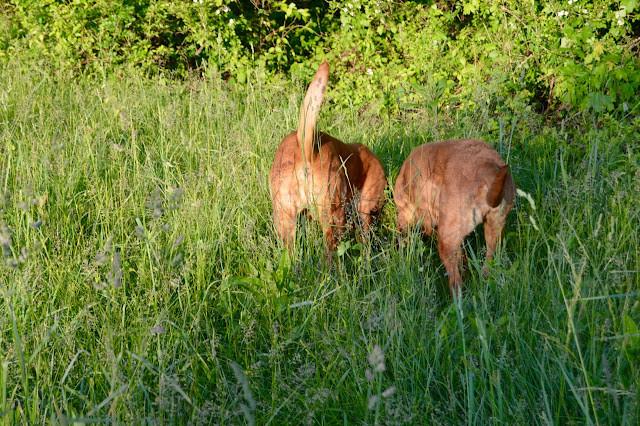 With the smaller lens, I was able to get more photos of Sadie since she has been spending most of her walk near me ... maybe it's because the hay is taller? 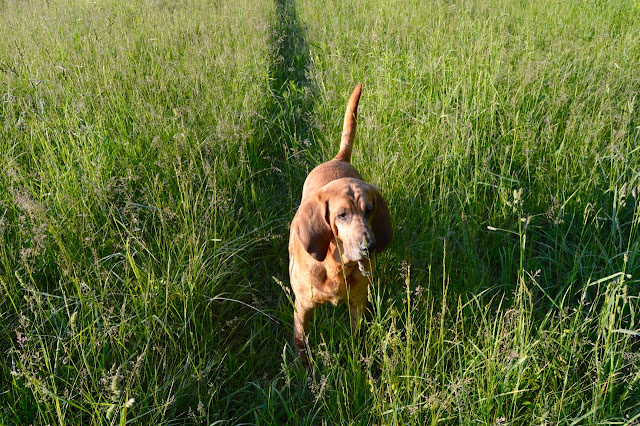 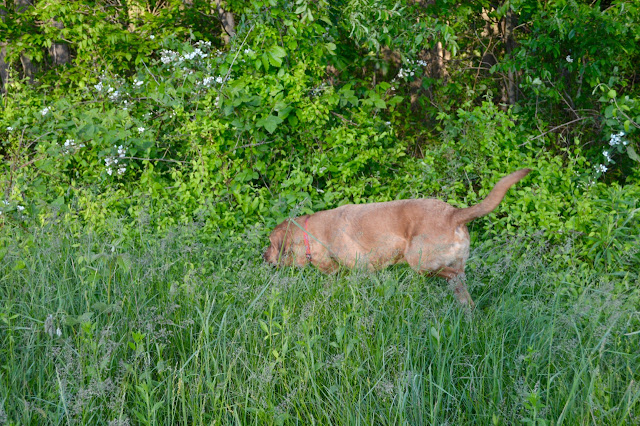 Sadie notices something up ahead, but I don't see any deer on the horizon. What she does see is a bird on the ground and that has always been her favorite thing to chase. While Stella stayed behind, Sadie took off for something I could not see. 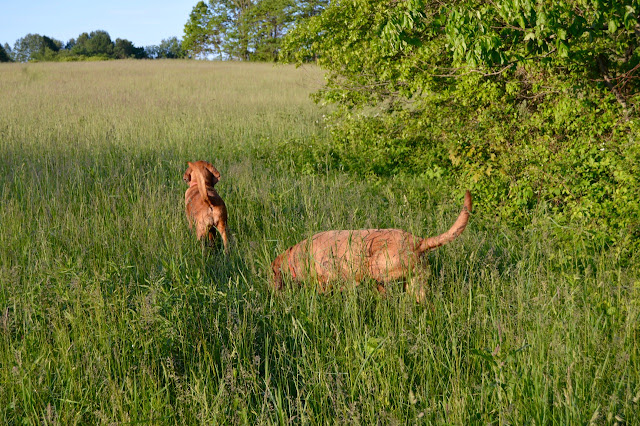 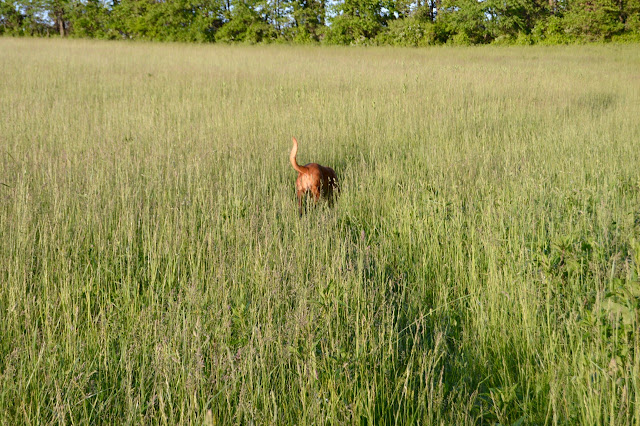 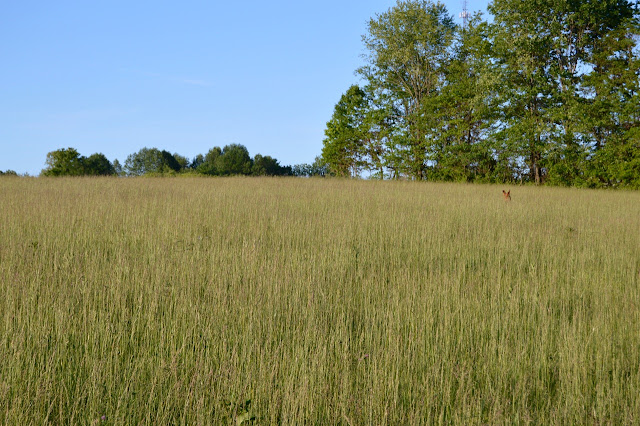 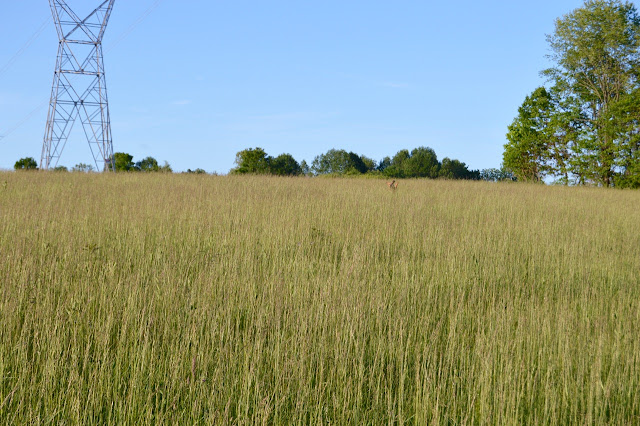 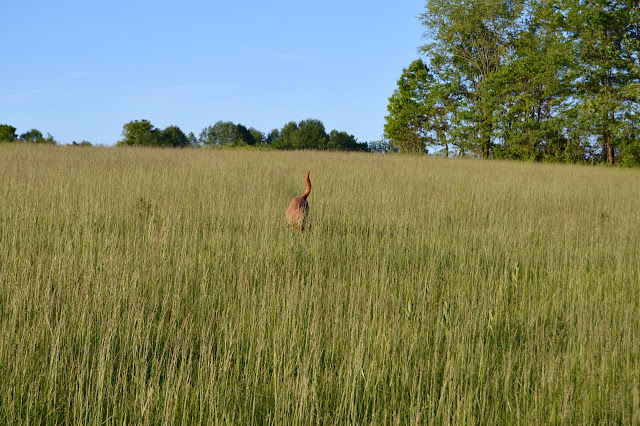 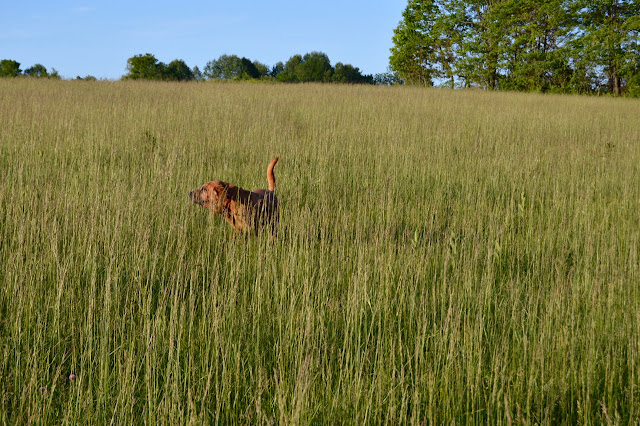 I did see a large bird take off from ground level. 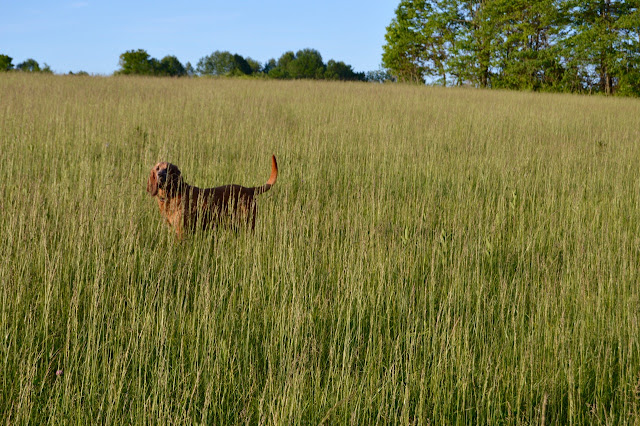 Stella was on her own trip though and for the past two or three days she has found something that she doesn't want to leave, over in that far right corner. I even called her today because we were already on the way back home. When she looked up at me and then went back down to what interested her ... I decided today I was leaving her. 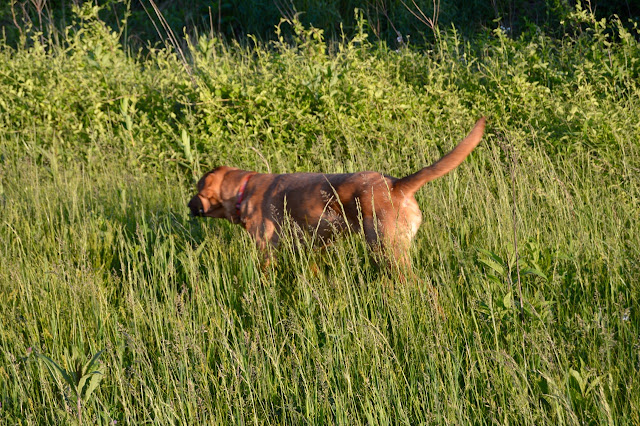 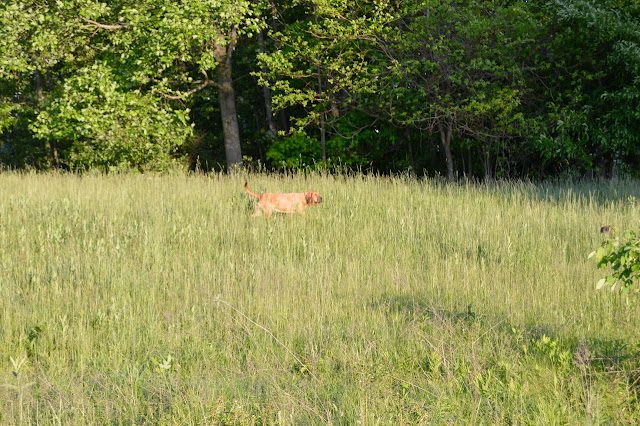 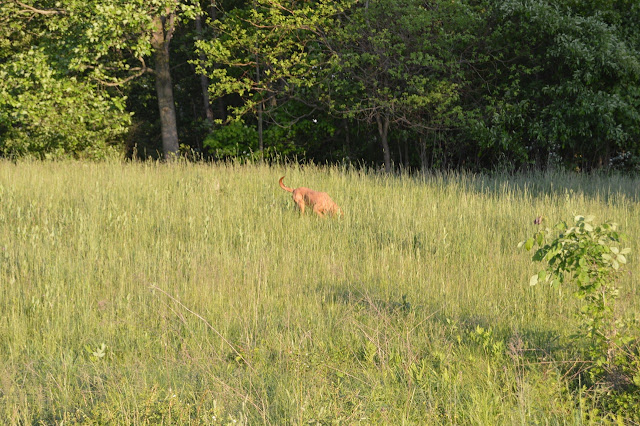 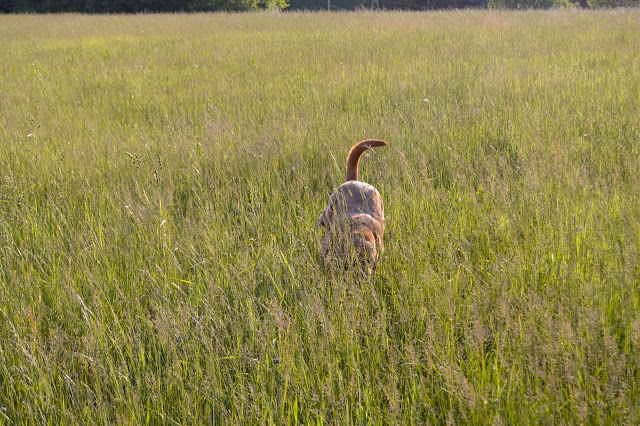 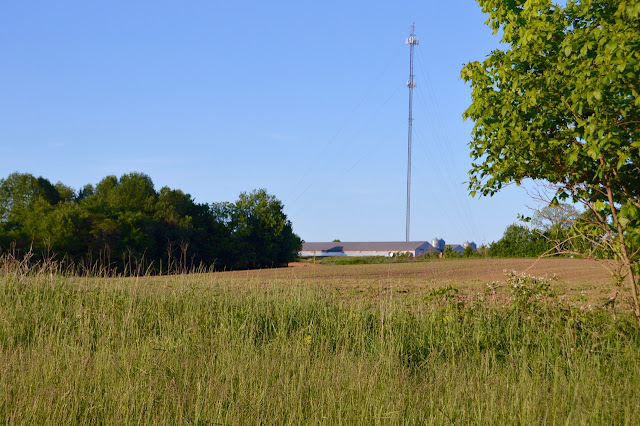 Sadie continued to hang fairly close but was still doing her own searching. 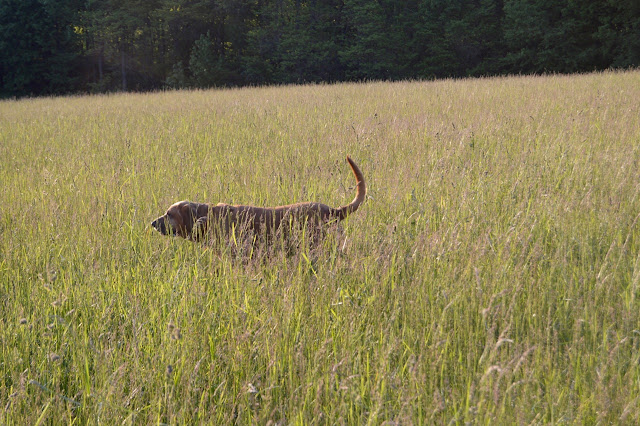 You can barely see Stella far ahead in that photo and Sadie and I are just making the turn to go home. 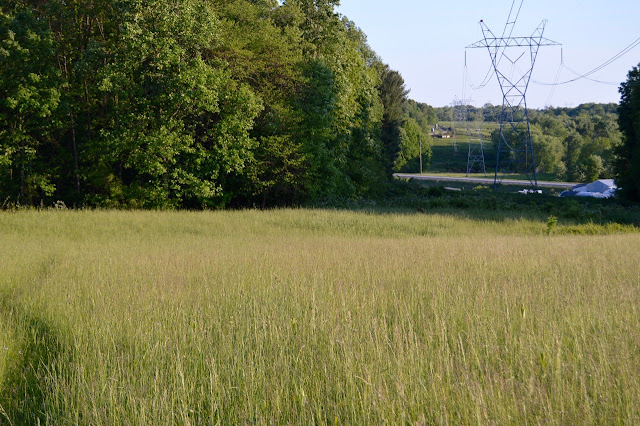 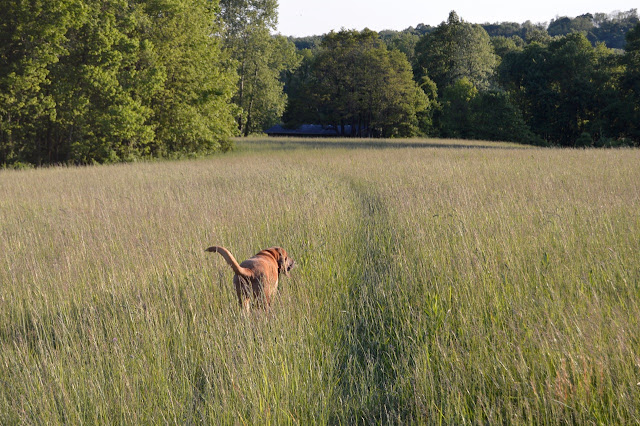 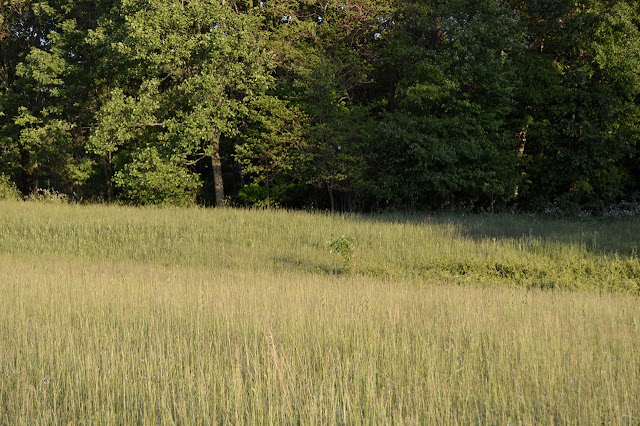 This is the time she looked up when I called and then went right back to what she was doing. Sadie and I headed home without her. 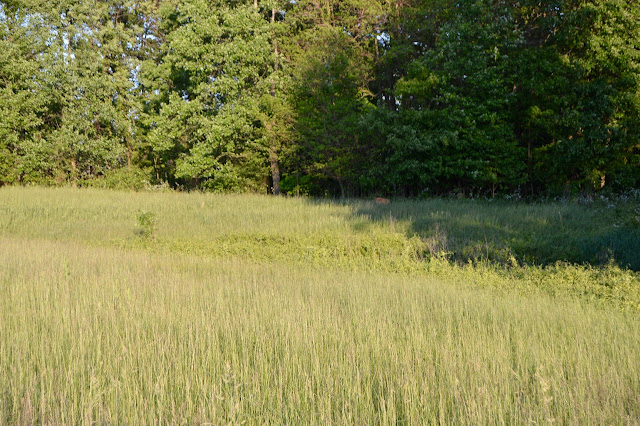 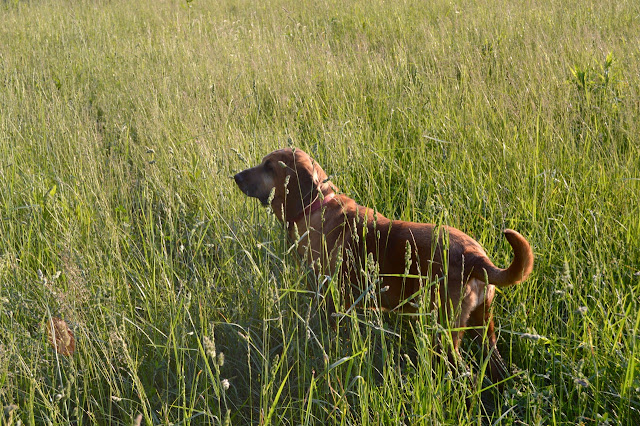 As we reach the yard Sadie is still looking back for Stella who isn't anywhere close and I cannot see her tail in the tall grass. 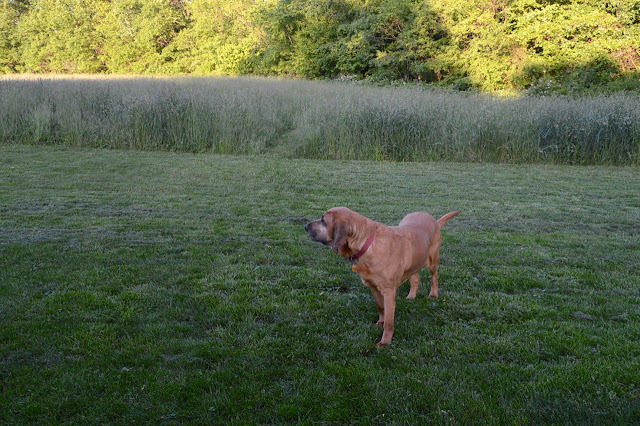 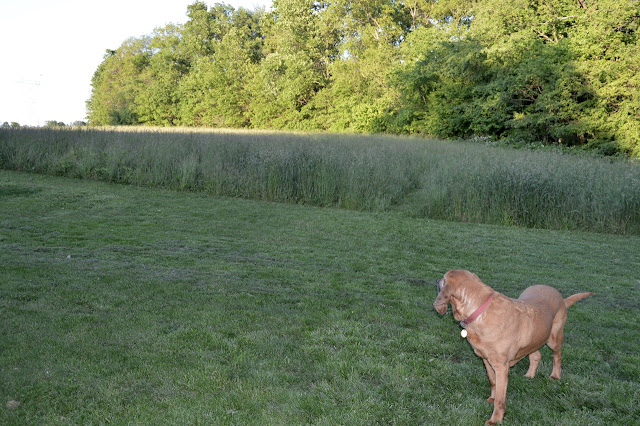 About five minutes later as I was downloading the photos from the card to the computer I hear "someone" at the door. Stella decided it's better to be a house dog and sleep inside than having to stay outside ... I guess. She is curled up sleeping as close to my desk chair as possible.

I can't remember the last time I've seen a tick on Sadie or Stella so NexGard did it's job. Also for you that use blogger for your blog, I have found loading all of my photos first and then writing in between the photos is much easier, faster and eliminates the format issues with spacing. It makes a lot of difference blogging on Blogger.

I guess there was something else to blog about tonight in 'the tropics' of Southern Indiana.