Woke Up To The Sound Of Thunder 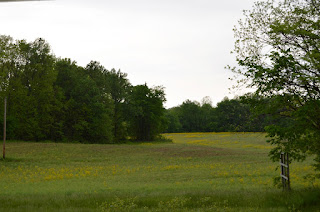 When you are told when you pick up Stella in August 2015, that she is afraid of thunder, this morning was another great test for her.

The thunder was so loud and so close I thought it had moved inside the bedroom. It was amazing that it was more of a shock to me than it was her.

All Stella did was raise her head, look and listen, then laid her head back down and went back to sleep. She has never what I called "freaked out" over thunder and storms. My first basset hound Harry had that honor and I was at fault for his fear. The most that Stella has done during storms since living here, is pace a little and very rarely whine.

It was raining lightly the first trip outside. I am not sure if any of the three hounds made it off the carport floor while I poured their breakfast inside. After checking the weather radar the storm had moved on NE and there was nothing west of us. Basically whatever the storm had been doing was while we were sleeping. 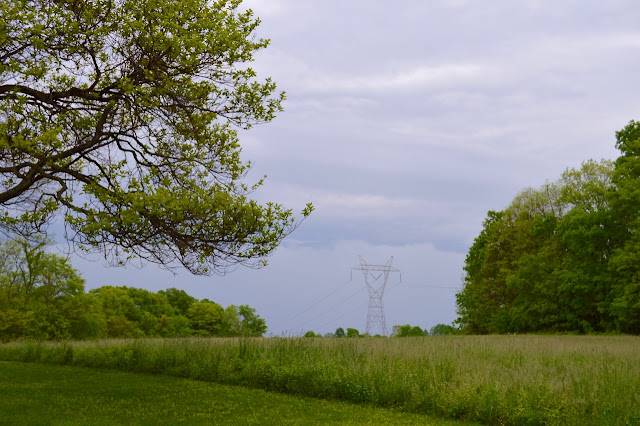 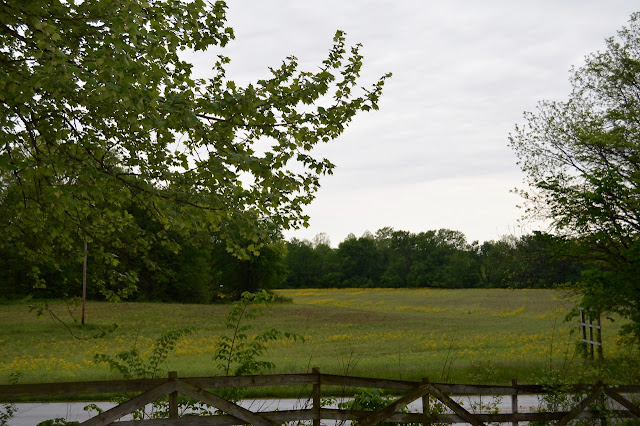 Heidi remained asleep, Stella and Sadie came outside for their 2nd trip of the day about an hour later. As I stood next to the corner of the house I could hear water coming down the gutter spout so talking myself into clearing the gutters on Friday worked. 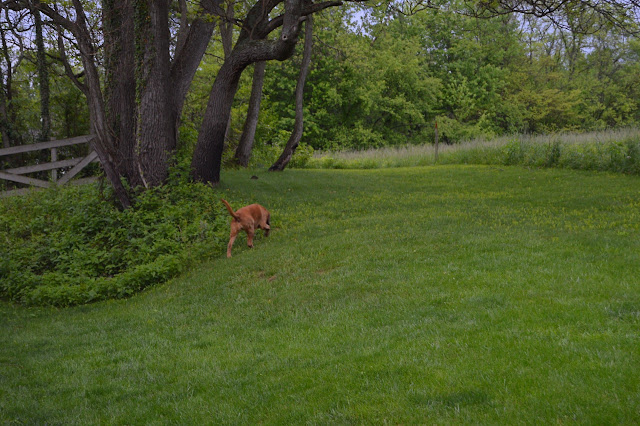 While Sadie headed to the field, Stella did her sample tests to see how wet the field was. She took off the opposite direction but hardly got into the field before running out. 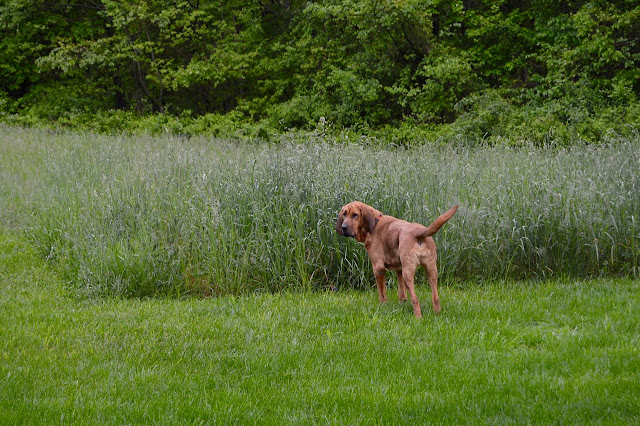 You can barely see Sadie's tail dead center of the photo. I've always been happy that the bloodhounds use the field as their 'drop tanks' and not the yard. That was just one of the things I didn't like about camping last June with Sadie, Winston and Heidi. Picking up poop in a bag was not one of my favorite camping jobs. 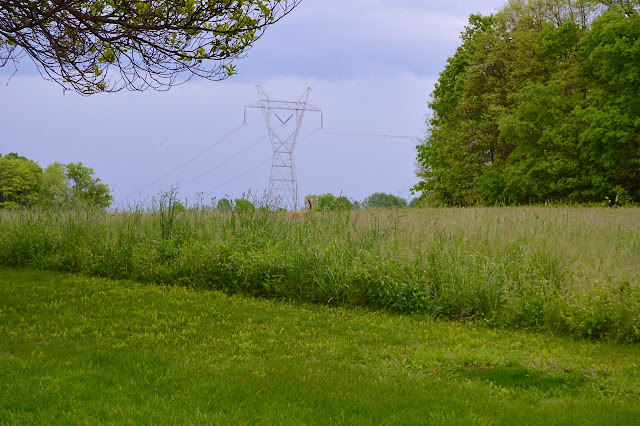 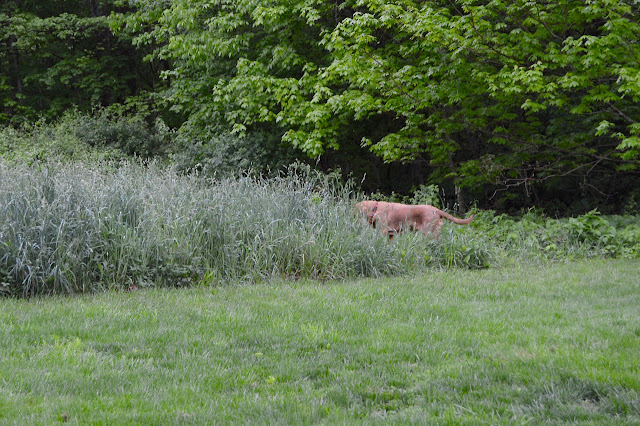 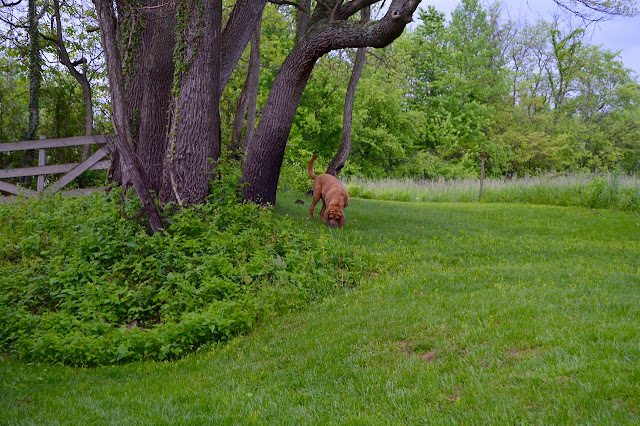 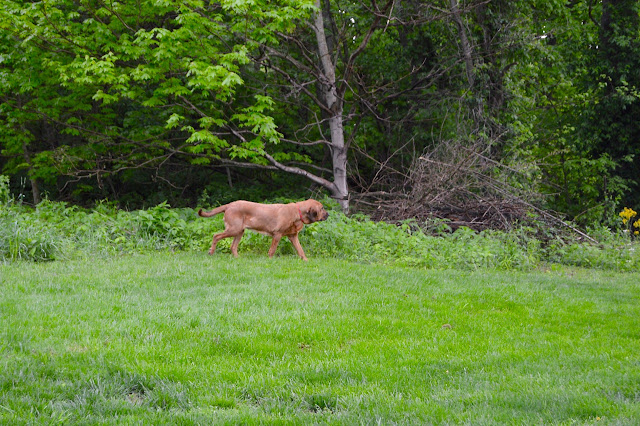 As Sadie heads back towards me, Stella is going in the direction that Sadie had come from. It's almost as if Sadie is asking her where has she been. 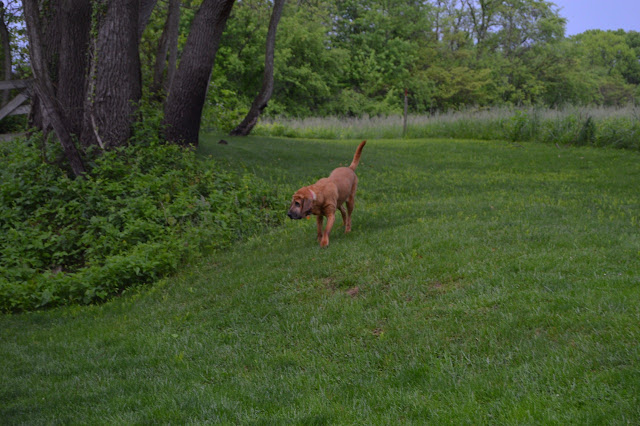 The angle of this photo makes them look so weird. Stella looks HUGE compared to Sadie and that isn't the case when they stand next to each other. I wonder how the camera distorted the photo like that? 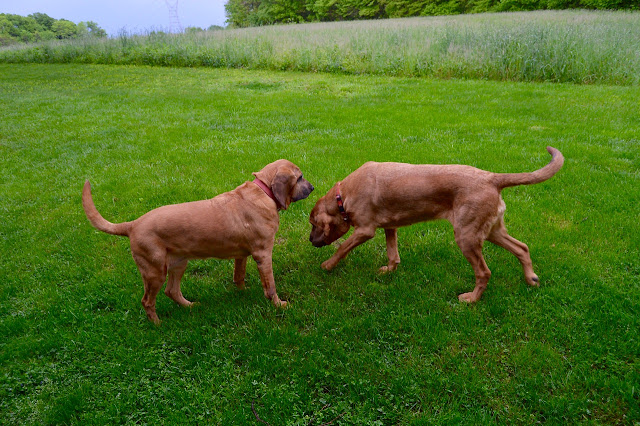 Right after Stella walked a away from this spot, a Cardinal flew on a tree limb right above where she was. I thought she might be taking a chance when it flew to the ground ... because Sadie loves chasing birds out of 'her' yard and I didn't know what Stella would do. 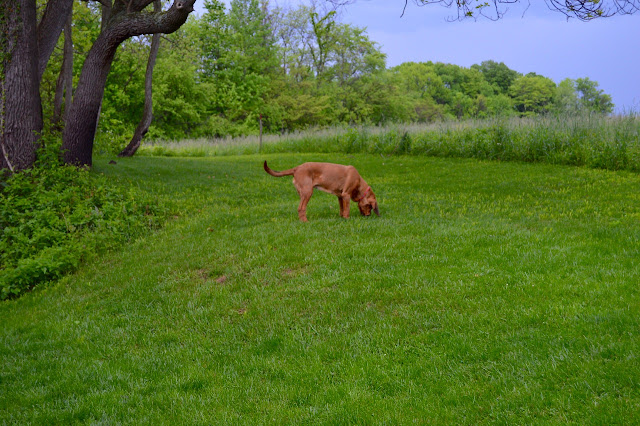 Stella didn't seem to care the Cardinal was there and Sadie never left my side and just stared at the bird. The Cardinal is the state bird for Indiana and also the nickname of the local high school athletic teams. I've always liked the color. 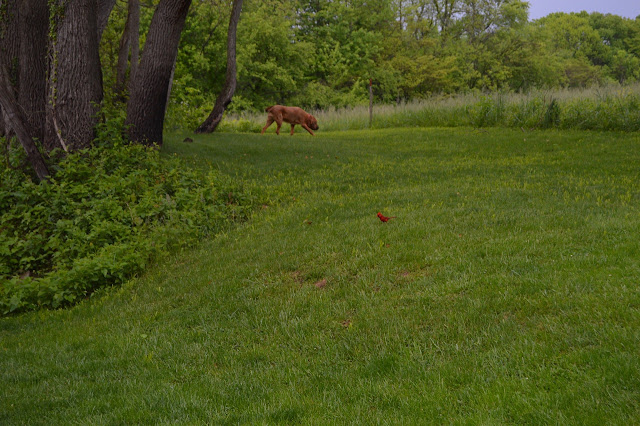 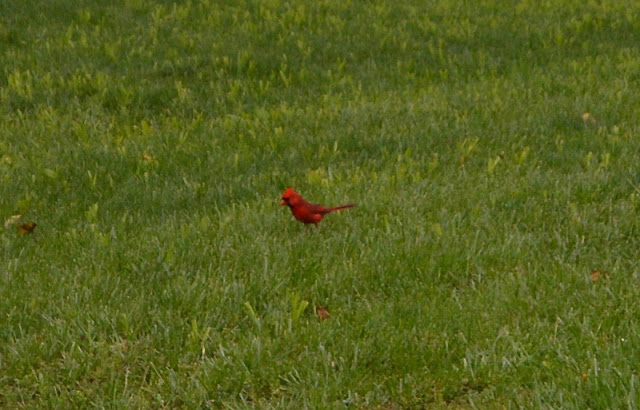 Stella actually went into the field just long enough to do what she had to do and then came trotting back to us. It will be overcast skies the rest of the day but no storms until late tonight. 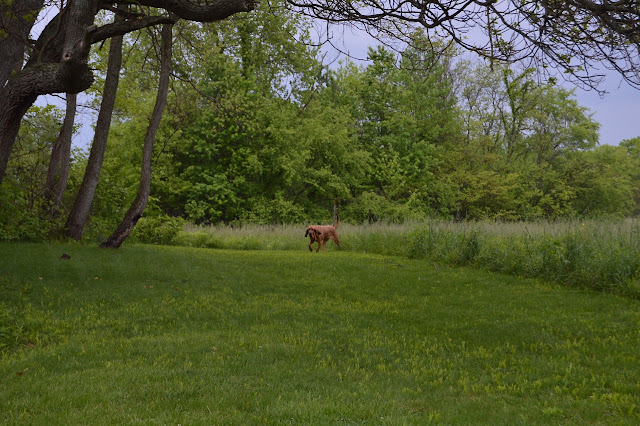 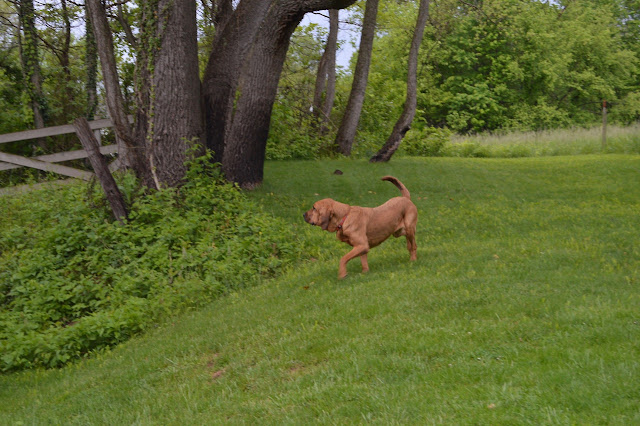 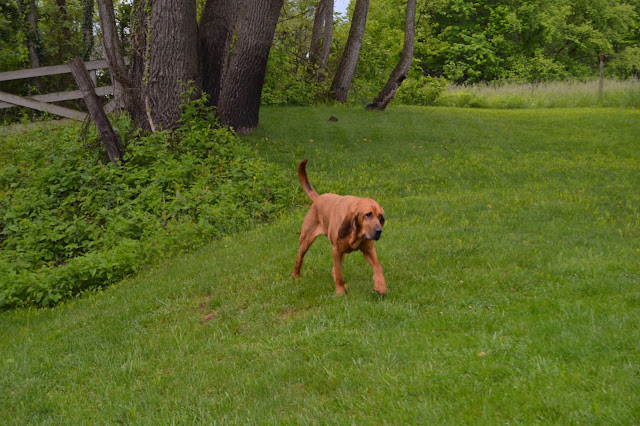 I was playing around with my blog last night and made some drastic changes to the template. It was no longer white but a dark blue, and the post area had a black background. Those were the stock colors for that template.
I asked and Cat M replied that yes, the photos did look sharper but the blog did not look as clean and crisp as it did before. I remember those two words being used last January sometime when I changed the blog's template from the tan background that I had for years to the white background it is now.
I liked the change in color last night and even chose a font that was much different, modern and much smaller. You are going to ask me what it was and I can't remember the name of it now. There was a problem though.
What I was seeing on my 27" Apple monitor along with my 13.5" laptop was great. I could read everything, the colors looked great and I was going to leave it that way. Until Cat M emailed me a screen shot of what she was seeing on her computer.
The new template was unreadable!!  The fonts were chopped up and blurry. The colors were so dark you could not see the links along the sidebar or the page titles in the bar across the top of the blog. So I decided to go back to the previous template and change the color from the crimson to a bluish color as trim and keep the white background.
About the time I was making those changes the thunderstorm took out my satellite internet reception so the blog was stuck in that drastic change for anyone that was reading it from a different location here in 'the tropics' last night.
Then really late last night I decided I liked the Crimson better as a trim color but I did change all the fonts.
Let me know if you have any problems reading the new fonts.
It is looking more and more like a day of reading books here in 'the tropics' of Southern Indiana.
at May 08, 2016