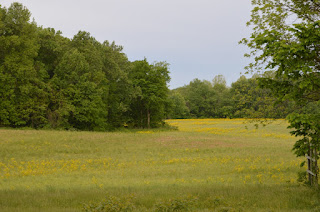 With rain predicted tonight, I heard the rumbling sound of farm equipment and assumed the field across the highway was being plowed. It was the next field over, where they had plowed a few weeks ago. One tractor was spraying fertilizer with another following with a new round of disking.

It wasn't long before a 3rd tractor shows up with planters on the back. Of course my Nikon D3200 decided it didn't want to work again. It's been on the blink now for the year it's been back from repair. I don't think I'll be buying another Nikon in the future.

********************
The hounds went out for an early scout of the yard. Neither was too enthused about starting the week, although Stella entered the field on the far corner again where the grass is not as high. She tried to sneak out along the edge of the brush line. 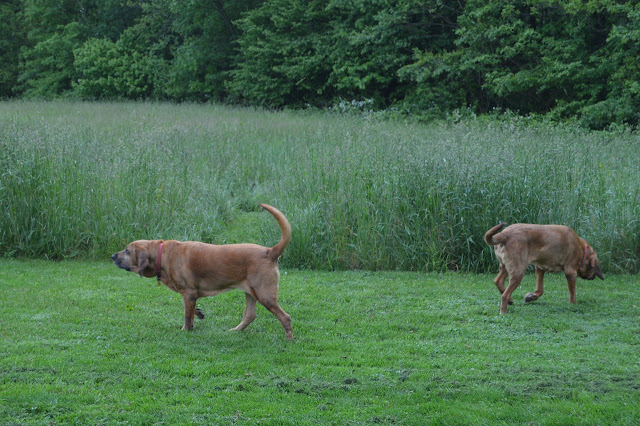 It was about this time while I was trying different things to get the Nikkor 55-200 lens to work. For the past several months when turned to the 55mm mark the lens would not retract flush like it should. I found a fix for that on the Nikon D3200 forum months ago. It said to turn the focus ring counter clockwise and the lens would retract to the correct position. When doing that I always felt resistance and hear a slight plastic clicking sound. I figured that was normal since it was being turned counter clockwise. Today when I tried that on the 55-200, it was smooth as butter. There wasn't any kind of resistance nor sound. 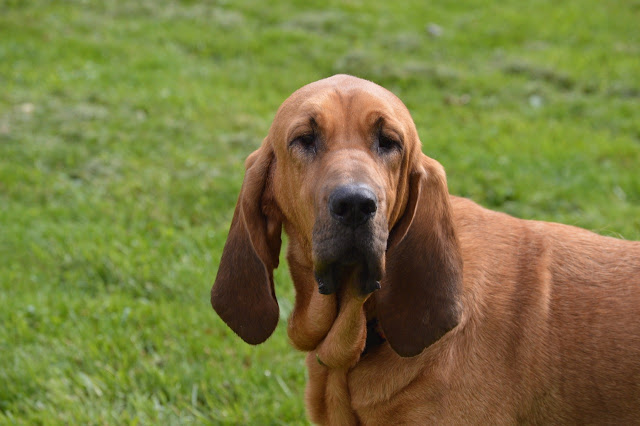 When I tried taking photos with the 200mm zoom, the lens auto-focused with the lens moving in and out very smooth without any kind of sounds. Was that my problem with focus in the past? I had not been able to take a zoomed photo higher than the 135mm setting on the camera for quite a while. 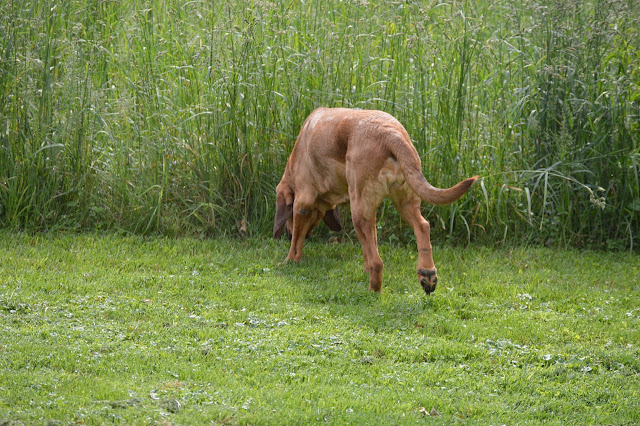 With it working I started taking photos from different lengths of zoom. I saw where the birds tried building a new nest in a different part of the carport last night. The problem with this area, that ledge they were trying to build on is only 1/2" wide and not enough surface to hold a nest. 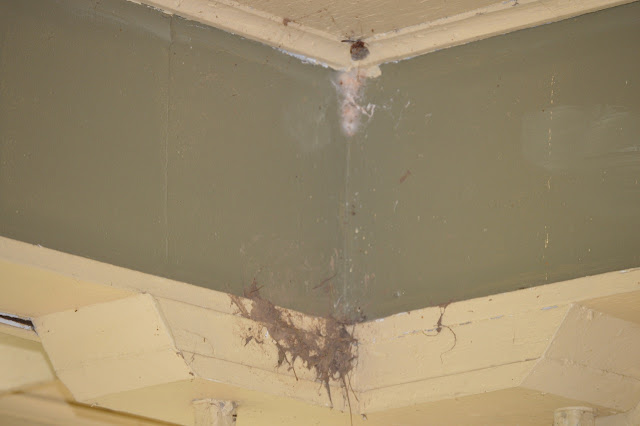 In the meantime as I was trying to get photos of the farming across the highway, Stella decided she would quietly sneak away. I am going to have to start watching her and calling her back before she gets into the wooded area. She has been creeping past her boundary lately. 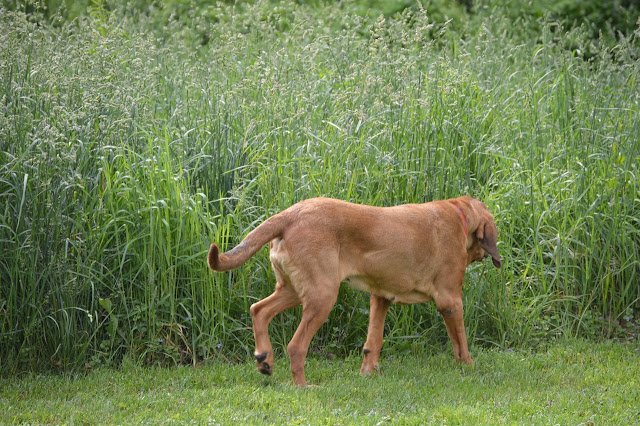 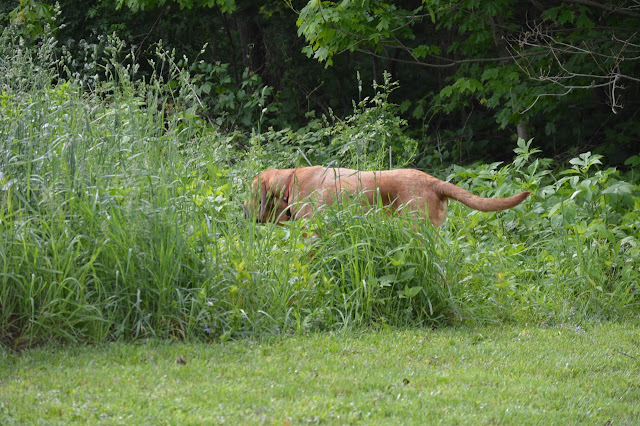 Sadie decided she would hang back and try to talk me into the first walk of the day but it's way too wet for that right now. It might take a few more hours for the field to dry out from the heavy dew. 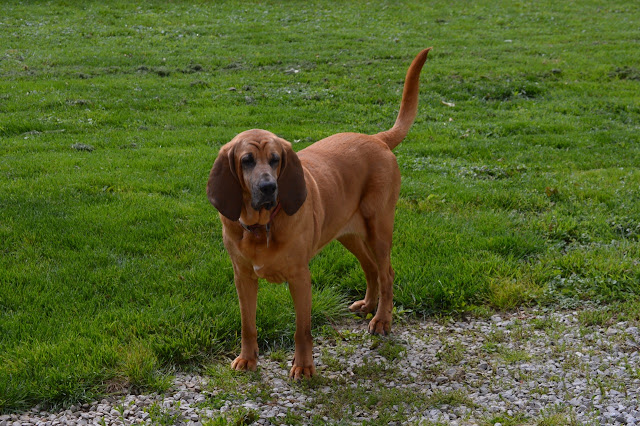 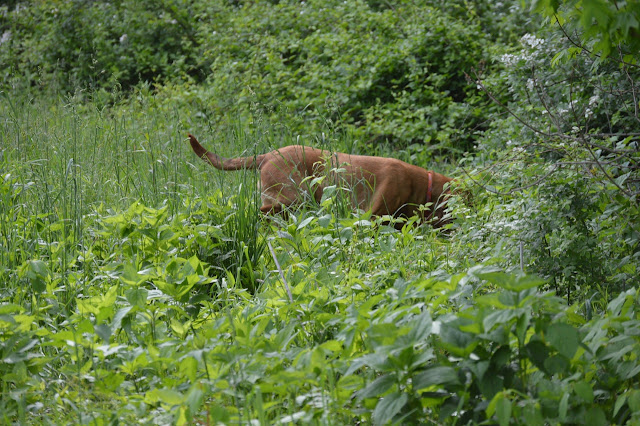 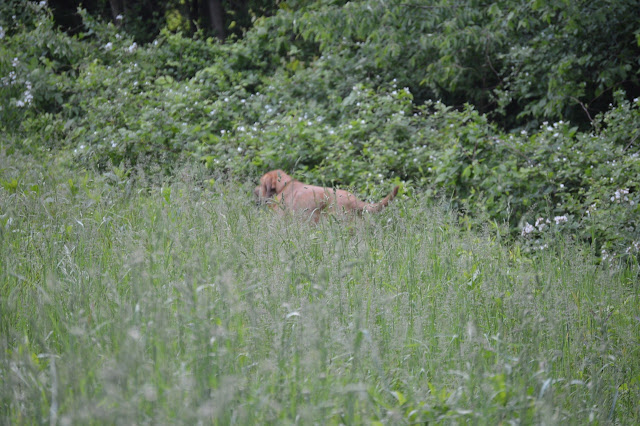 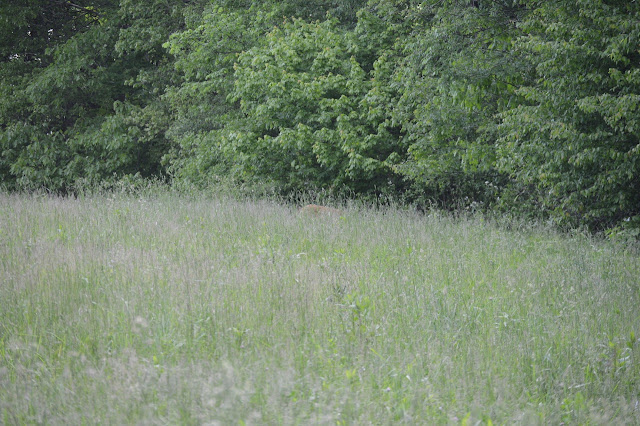 I was only able to get this one photo of the farming going on this morning with a 55mm setting, then I cropped it. When I turned around I couldn't see Stella so I yelled her name pretty loud for her to get back to the yard. 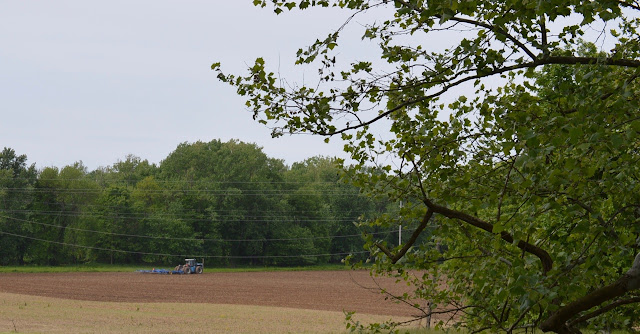 She wasn't happy being caught but did start her slow trek back to the house. 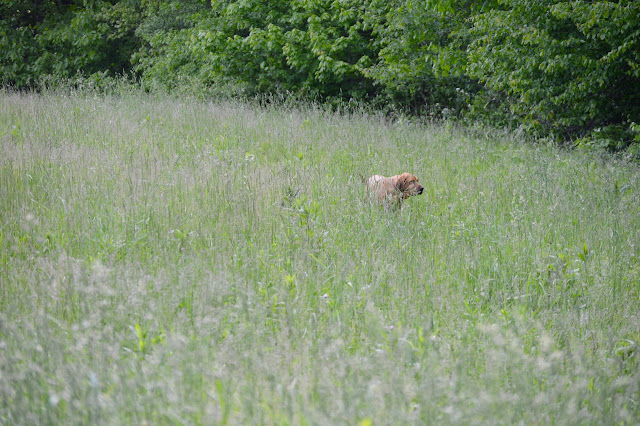 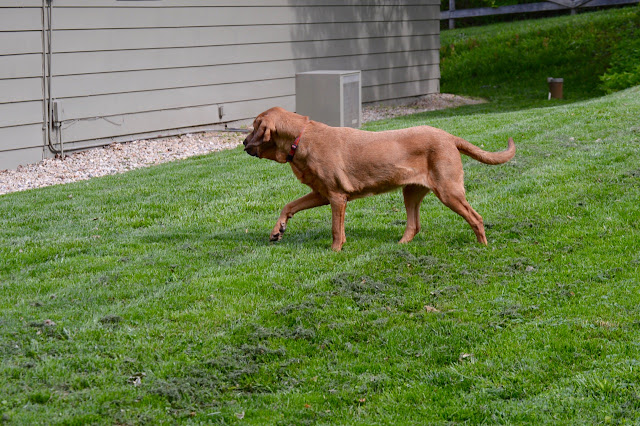 With the camera battery low, I stopped attempting to take more photos, happy that the lens was now working again. I still don't know if it's my eyes but the photos don't look nearly as sharp to me as they did when I first got the camera.

One difference is when I first bought the camera I was shooting NEF Raw quality then but changed that this past year to JPEG Fine due to the large file size of the raw images. With limited data per month I could not afford to upload as many photos to the blog as I do with each photo being 6-7Mb's in size with the raw quality setting, unless I did my blog posts after midnight. Between midnight and 5am I get unlimited data that is not counted as part of my monthly usage.

I've been going over the camera owners manual over and over, reading the Nikon forums in trying to solve the different issues I've had with this camera. Years ago I used a Cannon Manual camera and various lenses without any trouble.

Heidi is headed for a bath after this and a fresh application of the water, vinegar mix. This morning is the typical "two steps forward and one step back" in the process. I'll let you guess which direction she is going this morning.

I'll try to add some more photos to this post after the battery is charged up.

*************************
Here are some photos taken after the battery charged up. The lens is still moving smoothly and retracting to the correct position. It will be interesting to see how long it works. 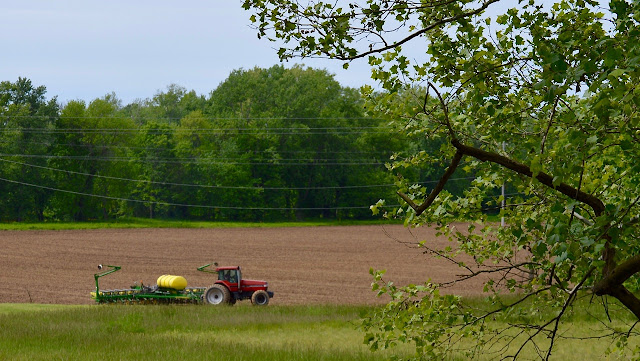 Sadie and Stella take in a meal of grass chewing. Looking back on the blog a year ago and I see that the field this year is much taller than last. I had not got Stella yet and Sadie was still being tethered while she roamed the field.

Heidi's skin looked almost the same as this year and Winston spent a lot of time just laying in the yard. 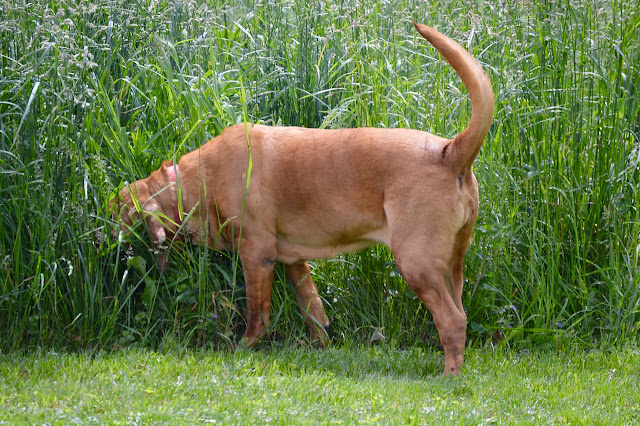 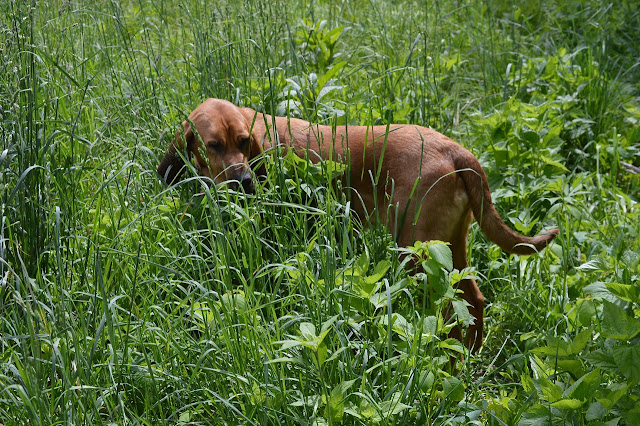 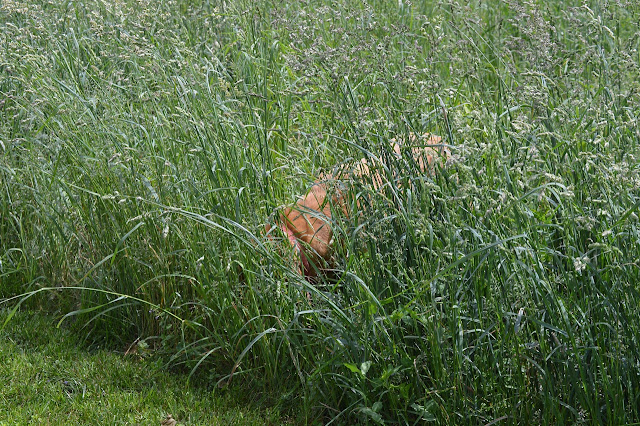 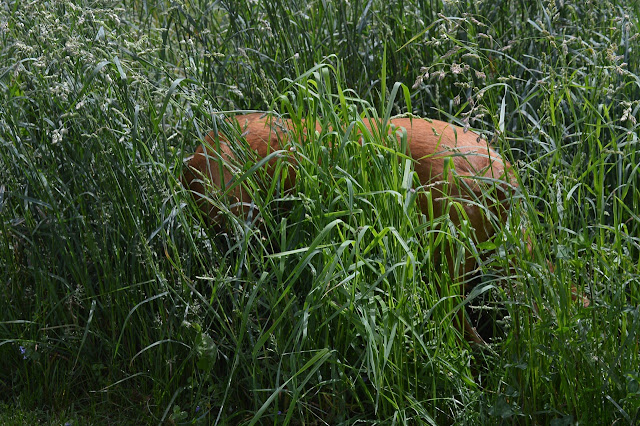 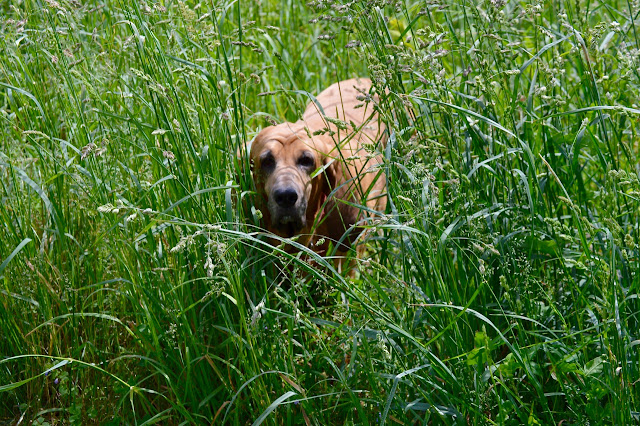 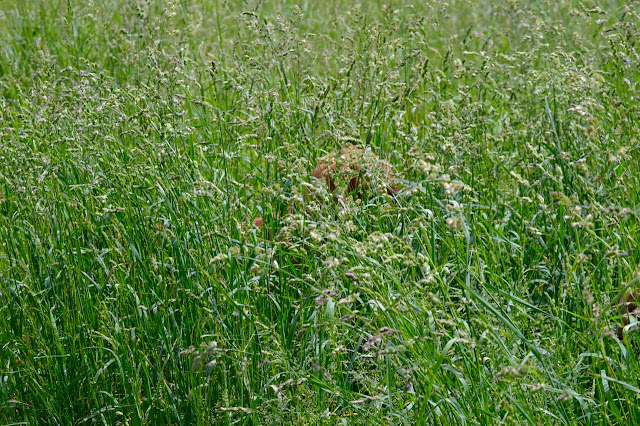 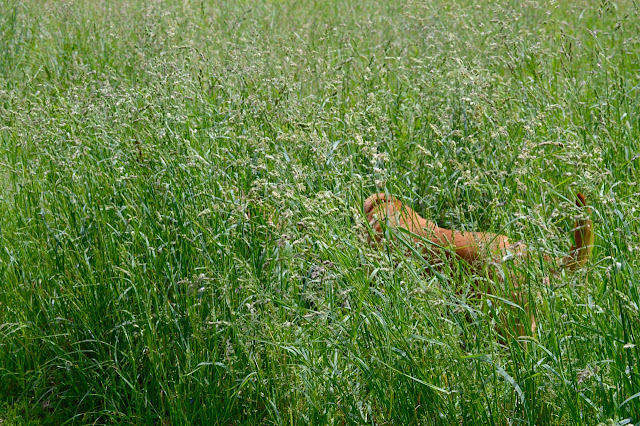 Overcast skies and another day of cool temps here in 'the tropics' of Southern Indiana.
at May 16, 2016