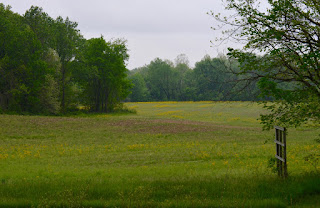 Chances are slim for rain this morning, that is until around noon. Then we have a 50% for some rain. The hounds will not like that as they are already showing signs of boredom. They need their walks in the field as much as possible.

Although the ground in the field is really saturated to where the dog walk is cancelled so far today, I hope to have the yard dry off enough that I can squeeze in mowing the front yard before rain today. More rain is forecasted for later this week and by the time it drys out it will be too tall to cut if I cannot mow it today. I don't like cutting grass that is wet unless I have to. 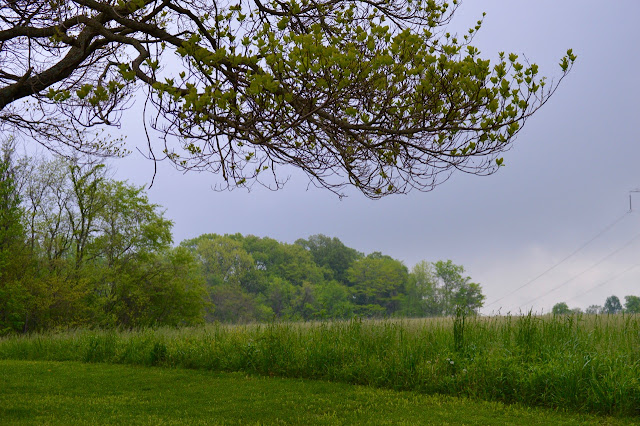 After taking those first two photos like I do every morning, I went back inside to make coffee while Sadie and Stella went to search last nights animal traffic and to relieve themselves. As I stepped back outside to check on them I could barely see them. That's Sadie in the first photo. 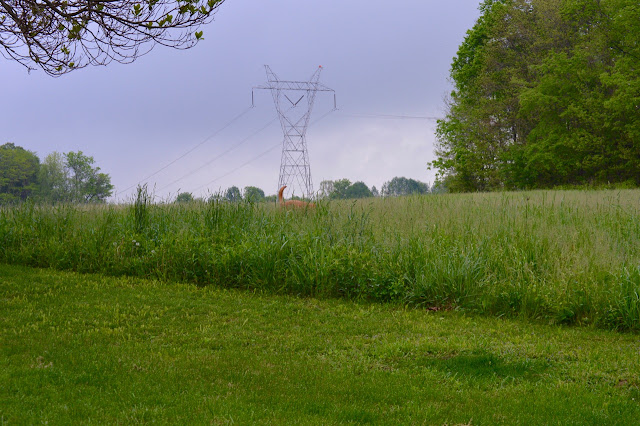 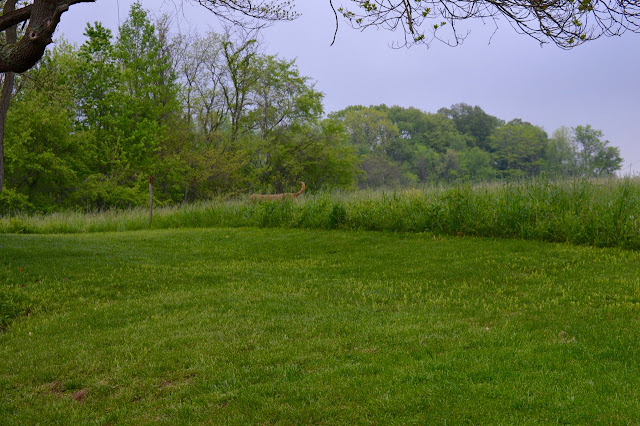 Stella was still undecided on whether to walk into the field while Sadie marched on, did her job and then came trotting to the house. Stella eventually did but didn't step further than one step in the field. I wonder if she doesn't like the wet grass touching her stomach?

Remember that Sadie has the solid red, faded collar and Stella has the bottom half of her tail coated with black hair. It was the reason her name before I got her was Dipstick. 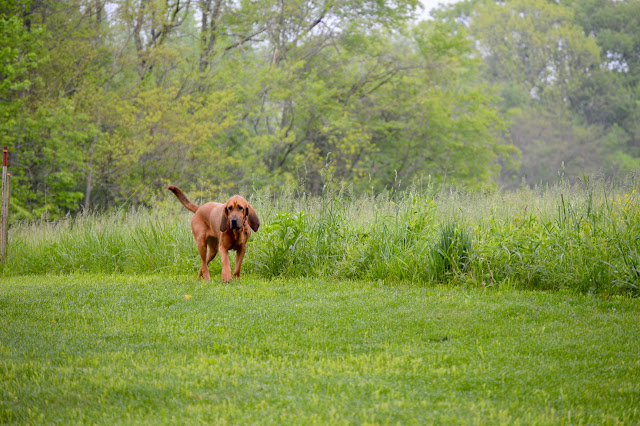 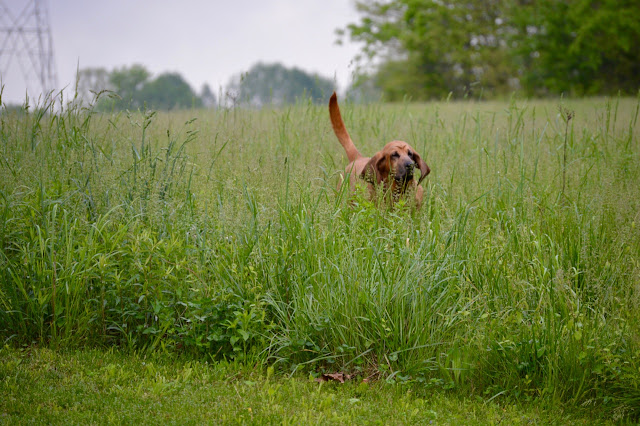 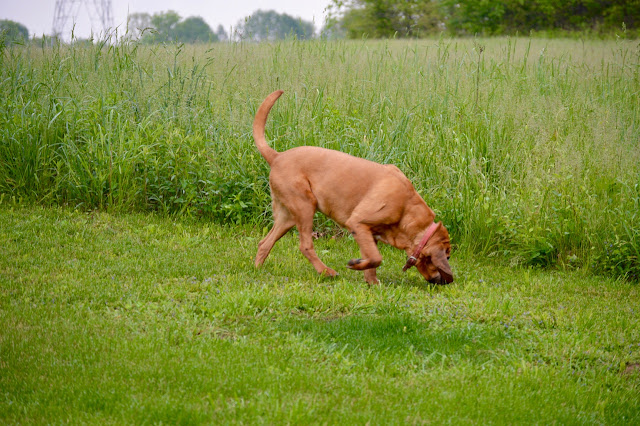 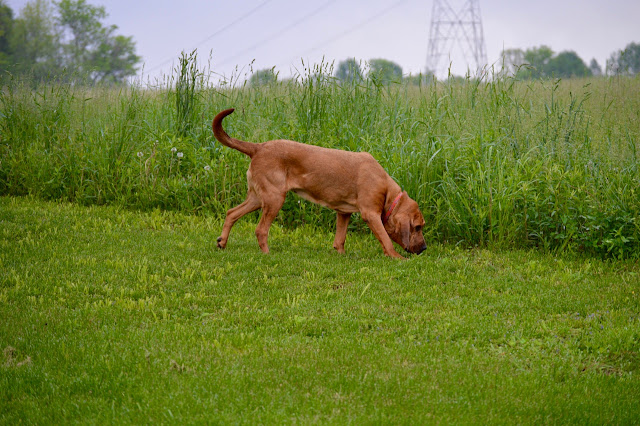 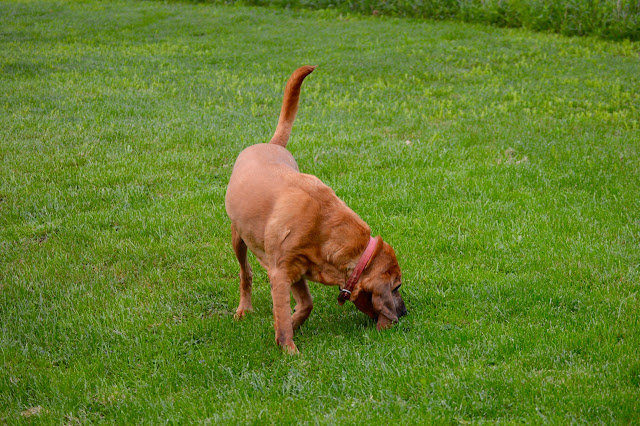 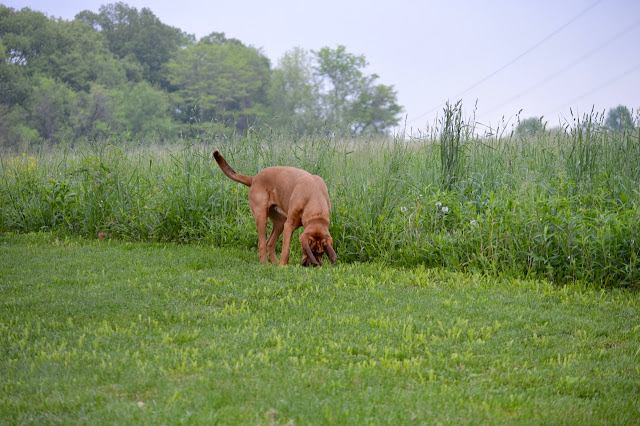 I will say that NexGard is working fantastic. The ticks have totally disappeared from either Sadie and Stella after they have been in the field. I can't remember pulling more than two ticks off of them this past week. The tick on Sadie was already dead and Stella's was close. Since Heidi rarely goes in the field I held off giving her NexGard at this time but I am keeping an eye on her for any tick activity.

When writing last night about the blogger that wanted to be "paid for his work", I may have confused some readers by what I wrote. I hope not. When I emailed the question to him asking him if I should also be paid since we both spent time with our blogs ... I meant not only me but ALL BLOGGERS ... don't we all spend time writing, maybe doing research based on the subject, taking photos and then having to edit them before posting on our blogs?

Each of us spends time blogging just like he keeps reminding his readers. I have never felt that I needed to be paid for my time. Blogging is my choice just as it is his choice ... yet he is needing the income to replace his loss of book sales. Is that justifiable?

I was trying to point out to him and to my blog readers last night ... what makes him different than us, that he needs to be paid compared to all the other bloggers?? Just because he has published books and that market has tanked for him, in his own words, does that justify putting his readers through a guilt trip to be paid on a monthly basis?

All bloggers spend just as much time as he does in writing, taking photos, editing photos and then publishing to their blogs.

I guess it must have been a dud as a subject since I didn't see any kind of feedback this morning. I'll drop the subject.

I am working on a couple of future posts, where photos will show/tell the story. One of them will be on Heidi's medical history as well as the food she has been fed these past 20 months when her skin allergies became bad and uncontrollable.

I hope to get that posted sometime today. She had what I call a relapse last night where her skin looked as if there had been zero improvement that was shown just a few days ago. I had not seen it so red like that in quite a while. I'm once again confused on what to do.

The other subject is something I have thought about for a while but it would definitely fall under "Other Stuff" in the blog title. It will not be pretty but the photos I will take will show a sad story of the slow decay of a small town based on the increase in empty business buildings around the town square as well as a couple of major businesses surprisingly going out of business in today's economy. They were both business you would never expect closing their doors.

The sky may be gray this morning but the birds are in full volume here in 'the tropics' of Southern Indiana.

at May 03, 2016
Email ThisBlogThis!Share to TwitterShare to FacebookShare to Pinterest
Labels: Blogging, Heidi's Skin, Hounds