Stella Howls For A Walk 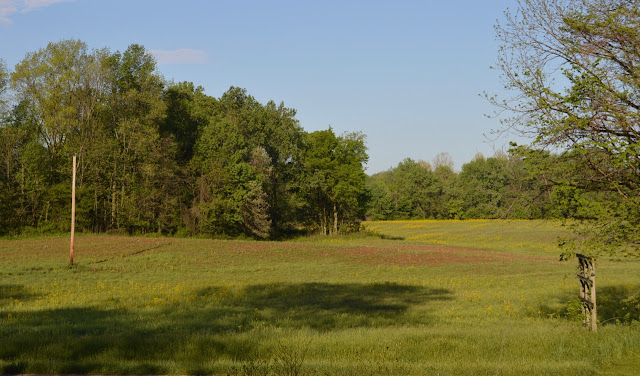 Yesterday didn't amount to much and I could not even dream up anything to blog about last night. At one time yesterday it was raining so hard you could not see. Of course when that happened I was doing 65mph heading down the highway to the store to replenish supplies.
The shopping trip was successful although a little higher cost than I like. You would think they could wait at least a couple of weeks before they raise the cost of most foods I buy. It was good to get back home and see that Stella had continued her streak of no damage while I was gone. It's been a while, longer than I can remember, that she damaged something with her separation anxiety.
During the times where the rained stopped the hounds would go outside to see if there was even a chance for their walk. Since the morning walk was cancelled they were starting to get a little cabin fever. It doesn't take them long to get bored with inactivity ... they are not like the commercial you see at times with a bloodhound laying on the porch. 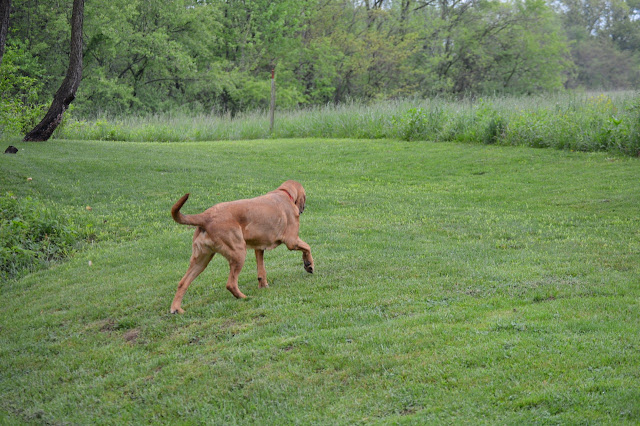 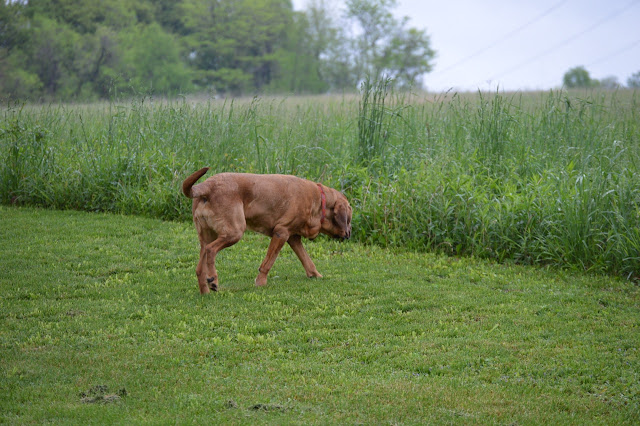 Since it was always wet Stella didn't get much further than the cut grass of the yard. 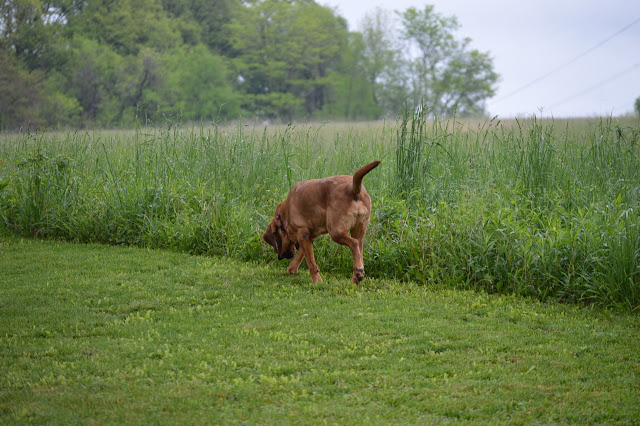 Sadie just stared and knew what the rain had done. She could tell there wasn't going to be an afternoon walk. 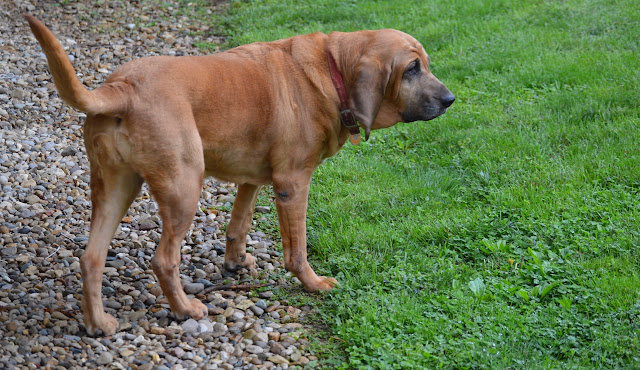 With just a glimpse of sunshine, Stella took that as it was time to go. She started howling for the walk as it was too late to be begging for food. She had lunch hours before this happened. With her howling, Heidi started her barking routine thinking a third meal was being served. 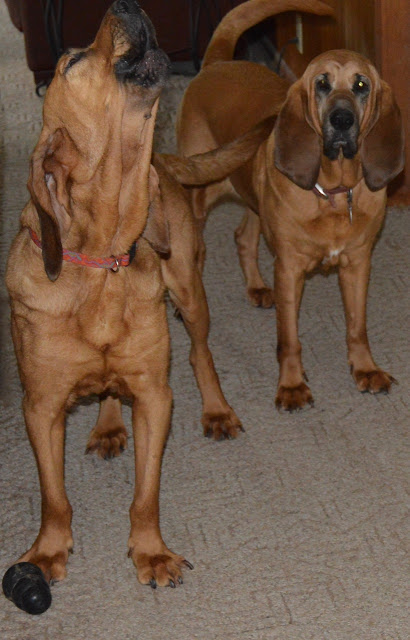 This morning was a different story. It had rained most of the night. I could tell by the light highway traffic this morning that the pavement was still wet, therefore the yard and field was going to be even wetter than yesterday ... but the sunshine was out ... so that is promising for later this afternoon's walk. 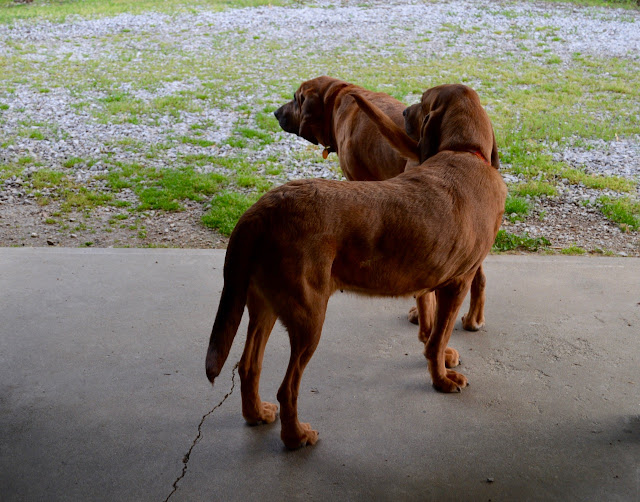 Neither hound walked outside the yard. Not even a nose to see if the field was wet. We did attempt it though. When I saw standing water after walking about 5' into the field "the game was called" and we returned to the house, to write this blog post. 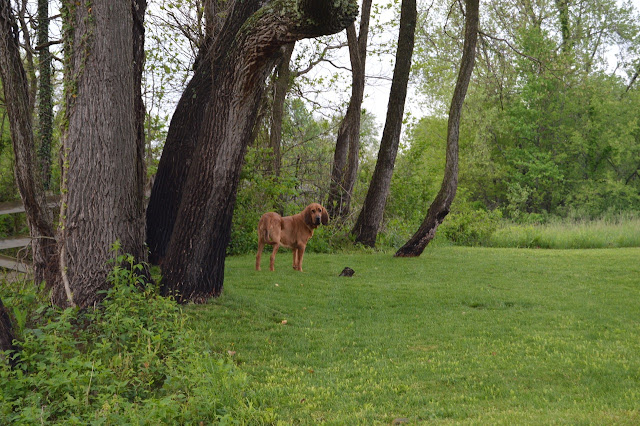 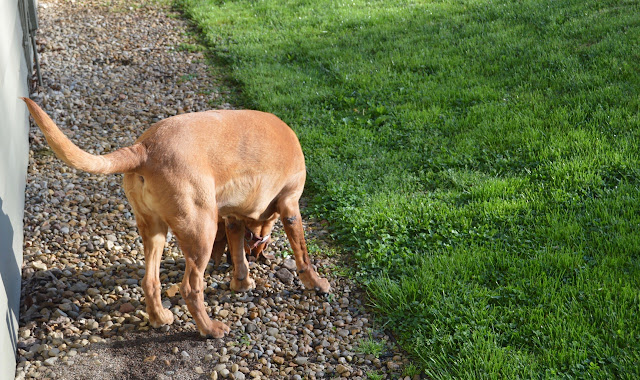 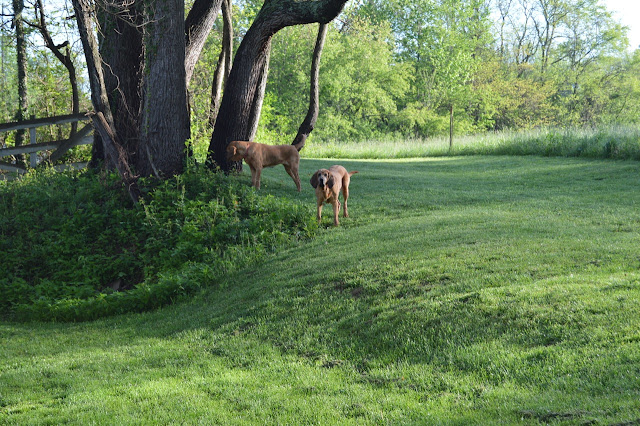 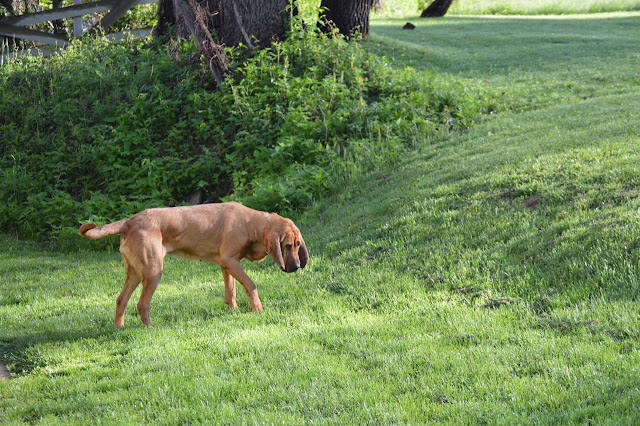 As you can tell from all the weeds in the driveway I have decided not to use any weed killer like I had thought about doing this year. With Heidi's skin situation I did not want her to be around any yard chemicals like that. She goes in the front yard most of the time but will walk and lay in the driveway when it is hot as sunny. The bloodhounds like to put their noses to the ground with Stella taking naps on the drive ... too close for chemicals. 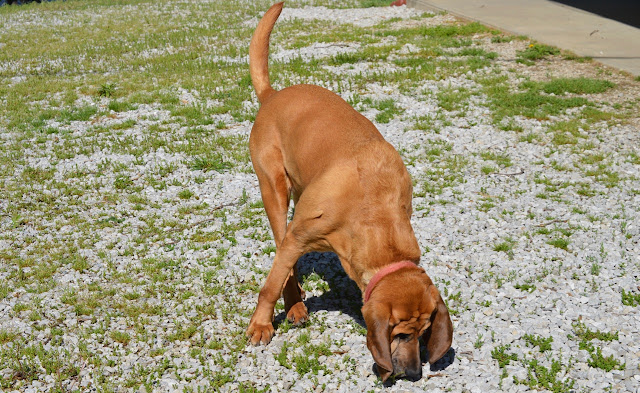 So even though I would prefer a clean driveway like I had after pulling the weeds last year by hand ... this year I will keep them as short as possible with the weed eater and let the sun kill them later on this summer. 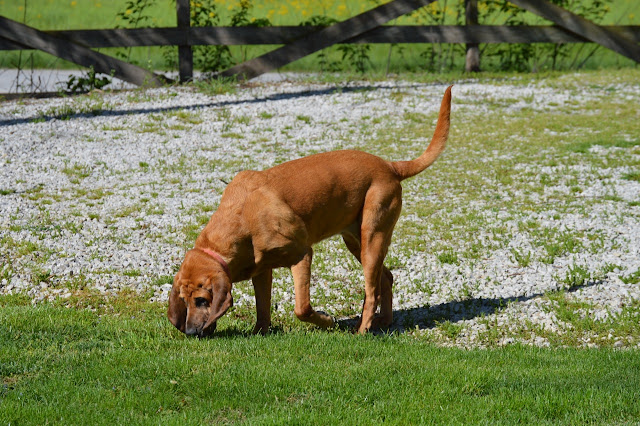 So with the standing water in the field there wasn't much they could do but return to the house for their daily morning siesta. Yes ... even after not being able to walk, both of them are sound to sleep with Sadie snoring. 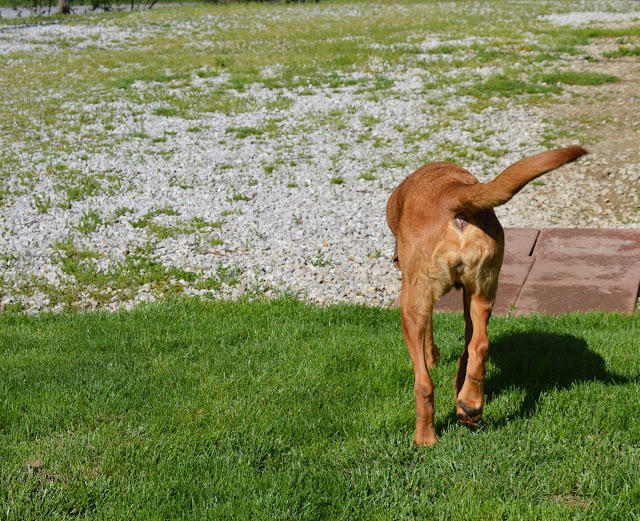 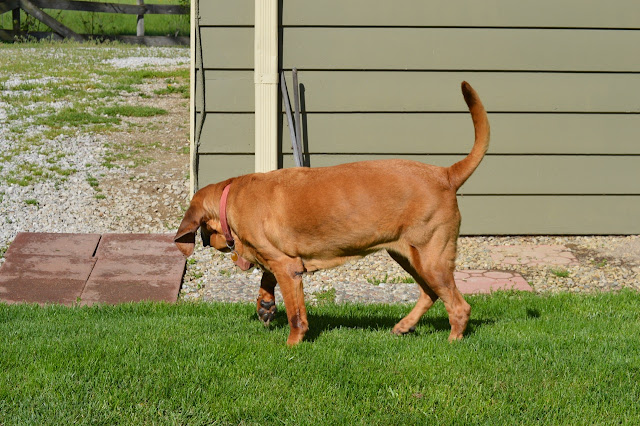 I had two exciting moments yesterday not counting the blind rain storm at 65mph. It dealt with the SanDisk camera card. On the side of my iMac are two slots. The first one is a larger slot of DVDs or CDs and right below that is the slot for my camera card.

It's one of those actions you do everyday a few times a day so it's a habit where you you don't really pay attention when sliding the card into the slot. Only yesterday that almost cost me a card full of photos. I would have lost just the new photos taken since I download all of them to my hard drive.

How would I have lost them?

I slid the small camera SanDisk card into the slot for the DVD/CDs!!! It went all the way inside, behind the felt ... gone!!! I was actually shocked that I didn't go crazy when it happen but immediately wondered how was I going to get it out without seeing it. I took a steak knife thinking that was long enough to get back as far as I needed. The teeth of the knife was able to grab the top side of the card and I could slide it out enough for me to pull it out.

You would think that would be enough excitement for one day but "Murphy" was bored with all the rain and he had decided he was going to make my day with nothing but screw ups. With the SanDisk card in hand I went to slide it back into my camera only to see and feel I had put the card in BACKWARDS!!!!

Luckily I was able to pull that out with needle nose pliers with no damage to the camera or memory card.

So far this morning "Murphy" has taken the day off ... he had enough laughs yesterday. With the sunshine out and having the itch to go somewhere I think the hounds and I are headed out for a photo exploration.

No wind, no rain and sunshine here in 'the tropics' of Southern Indiana.

at May 01, 2016
Email ThisBlogThis!Share to TwitterShare to FacebookShare to Pinterest
Labels: Murphy's Law, SanDisk, Stella's Howl